Potential NAr mutations involving 24 positions were found in 79 of the 131 patients (60.3%). Notably, AA substitutions at 2 positions (rt184 and rt204) involved in primary drug resistance and at 2 positions (rt80 and rt180) that functioned as secondary/compensatory mutations were detected in 10 patients (1 CH patient and 9 HCC patients) and 7 patients (1 CH and 6 HCC patients), respectively. The overall mutation frequencies in the HCC patients (3.17%, 96/3024 mutations) were significantly higher than the frequencies in the CH patients (2.09%, 52/2478 mutations) (P = 0.003). In addition, a total of 3 NAr positions, rt80, rt139 and rt204 were found to be significantly related to HCC from treatment naïve Korean patients.

Core tip: To date, naturally occurring mutations in hepatitis B virus (HBV) reverse transcriptase region (RT) in genotype C2-infected patients have rarely been introduced in terms of clinical severity. So, this study characterized the AA substitutions at the aforementioned 42 potential NAr mutation positions in HBV RT sequences from a cohort of 131 Korean treatment-naïve CHB patients with genotype C2 infections. Notably, AA substitutions at positions involved in primary (rt184 and rt204) or secondary drug resistance (rt80 and rt180) were detected in 10 patients [1 CH patient and 9 hepatocellular carcinoma (HCC) patients] and 7 patients (1 CH and 6 HCC patients), respectively. The overall mutation frequencies in the HCC patients (3.17%, 96/3024 mutations) were significantly higher than the frequencies in the CH patients (2.09%, 52/2478 mutations), suggesting that naturally occurring NAr mutations in South Korea might contribute to liver disease progression (particularly HCC generation) in chronic patients with genotype C2 infections. In addition, a total of 3 NAr positions, rt80, rt139 and rt204 were found to be significantly related to HCC from treatment naïve Korean patients.

Despite the availability of an effective vaccine, more than 240 million people are chronic carriers of the virus[1]. The annual number of deaths caused by hepatitis B virus (HBV)-related diseases, including cirrhosis and hepatocellular carcinoma (HCC), is estimated to be approximately 786000 worldwide[2]. HBV infection is endemic in South Korea; based on the Korean National Health and Nutrition Survey of 2011, the prevalence of hepatitis B virus surface antigen (HBsAg) positivity was 3.4% among men and 2.6% among women[3]. There is increasing evidence that specific HBV genotypes may play significant roles in the development of different disease profiles during chronic hepatitis B (CH) infection[4,5]. Notably, an extraordinary prevalence of genotype C2, which is more virulent than genotype B[4], has been reported in South Korea[6-8]. Furthermore, the high prevalence of basal core promoter (BCP) double mutations and the presence of a distinct immune response against HBV proteins in the Korean population can lead to the generation of unique HBV variants that are rarely encountered in other areas, resulting in distinct clinical manifestations in Korean chronic patients[9]. Indeed, several unique types of HBV mutations related to the progression of liver disease (particularly HCC) that are rarely, if ever, encountered in other areas have been found in South Korea[10-27].

HBV has an incomplete double-stranded DNA genome that is approximately 3.2 kb in length and contains 4 overlapping open reading frames (ORFs) encoding the polymerase (P), core (C), surface antigen (S), and X protein[28]. The HBV reverse transcriptase (RT) lacks proofreading ability, which can lead to HBV mutations that occur at a 10-fold higher frequency compared to other DNA viruses[29]. The high rate of mutations in the HBV genome compromises antiviral therapy with nucleos(t)ide analogues (NAs), leading to the generation of drug-resistant viral strains and disease. Although antiviral therapy using NAs is an effective control measure[30], obstacles remain, including the limited types of NAs available and the inevitable emergence of antiviral resistance conferred by viral mutations during long-term treatment[31]. Thus, elucidating the mechanisms underlying the evolutionary basis of the drug resistance mutations is important for their prevention and control. Drug resistant mutations in RT have been extensively explored during antiviral therapy using NAs, including lamivudine (LMV)[32], adefovir (ADV)[33], entecavir (ETV)[34], telbivudine (LdT)[35] and tenofovir (TNF).

To date, naturally occurring mutations in HBV RT in genotype C2-infected patients have rarely been introduced in terms of clinical severity. Therefore, this study characterized the AA substitutions at the aforementioned 42 potential NAr mutation positions in HBV RT sequences from a cohort of 131 Korean treatment-naïve CHB patients with genotype C2 infections. The clinical characteristics and significance of these identified NAr mutations were also investigated in the present study.

Serum samples were collected from 135 chronic hepatitis B patients who visited Konkuk University Hospital and met the inclusion criteria of hepatitis B surface antigen (HBsAg) positivity and HBV DNA positivity and were LMV, ADV, ETV, LdT and TNF treatment-naïve. All patients had negative tests for hepatitis C virus, human immunodeficiency virus and markers for coexisting autoimmune liver disease. Among 135 patients, the 131 patients proved to be infected with genotype C2, which showed two clinical statuses: chronic hepatitis (CH, 59 patients) and hepatocellular carcinoma (HCC, 72 patients), were used in the NAr mutation analysis. This study was approved by the Institutional Review Boards (IRB) of Seoul National University Hospital (IRB-1605-065-761) and Konkuk University Hospital (KUH-1010544). The experiments were primarily based on extracted virion DNA from isolates; hence, the study did not require informed consent and the waiver of informed consent was agreed upon by the IRBs.

Generally, the mutation definition and analysis were performed as previously described. Briefly, 42 potential NAr-relevant AA positions in RT were analyzed for AA mutations and concomitant HBsAg mutations. The AA mutations were identified by comparing HBV RT sequences with the genotype C-matched consensus sequence generated based on the HBV sequences obtained in this study and the reference sequences reported in previous studies[39]. A mutation type referred to the replacement of the consensus AA of genotype C with a novel AA.

The results were expressed as means ± SD, percentages. Differences between categorical variables were analyzed using Fisher’s exact test or the χ2 test. For continuous variables, Student’s t-test was used when the data showed a normal distribution, and the Mann-Whitney U test was used when the data were not normally distributed. The level of significance of each test was adjusted for multiple tests via Bonferroni correction. The P value < 0.05 (two-tailed) was considered statistically significant. To adjust P values for multiple testing and control the false discover rate for multiple testing was used[40]. We appreciate statistical consultation from the Medical Research Collaborating Center at the Seoul National University Hospital and the Seoul National University College of Medicine.

Correlation between the frequency of potential NAr mutation and clinical features 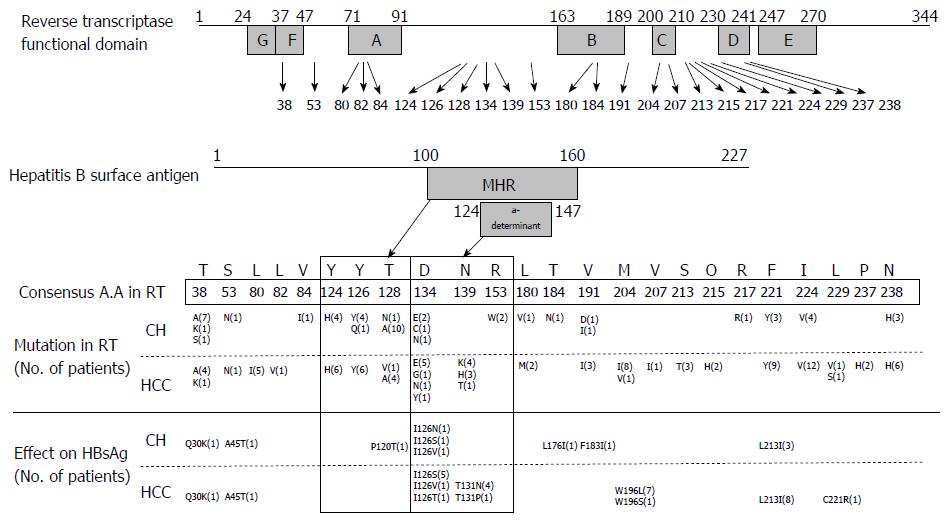 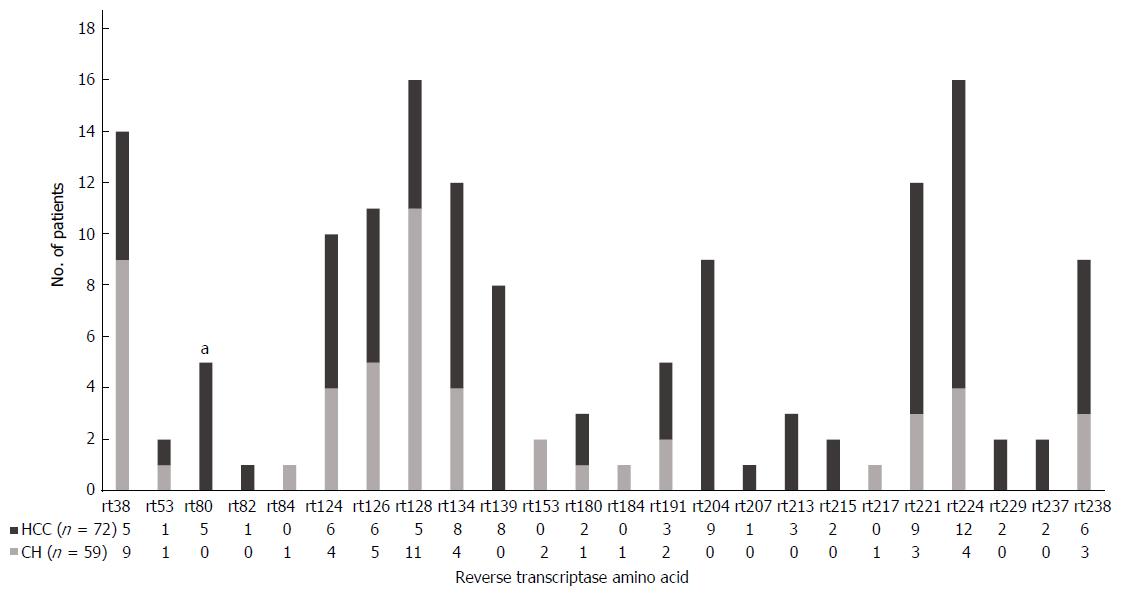 Naturally occurring RT mutations associated with HBV drug resistance have been reported from treatment naïve chronic patients from several countries[43-46]. In South Korea, higher mutation rates and unique mutation patterns related to clinical implications in several HBV ORFs (the HBsAg, preS, X, and preC/C regions) compared to other countries have been reported to date[10-15]. Furthermore, higher relapse rates after antiviral therapy in Korean chronic patients have also been reported[47]. However, there have been no reports regarding potential NAr mutations from Korean treatment naïve patients to date. In this study, we analyzed potential NAr mutations from 131 Korean treatment naïve patients with genotype C2 infections using direct sequencing protocols.

There are three notable findings in our study. First, our data demonstrated that the prevalence of patients with potential NAr mutations was 60.3% (79/131) (Table 3), which was almost two times higher than the prevalence of these mutations [30.73% (59/192)] in a treatment naïve Chinese cohort[36] using the same direct sequencing protocols applied for the detection of potential NAr mutations in the treatment naive Korean cohort. The difference in the mutation rates between the 2 cohorts was more pronounced with the Korean and Chinese cohorts [2.68% (148/5502) (Table 3) and 0.94% (76/8064)[36], respectively]. In particular, we found primary NA mutations at Category 1 positions from 10 patients (7.8%) [rt184 related to ETV resistance (1 patient) and rt204 related to LMV resistance (9 patients)] and the so called YMDD mutation or secondary/compensatory mutations at Category 2 positions [rt80 and rt180 from 7 patients (5.3 %)] (Table 3). These findings were in contrast to the two previous reports of Chinese cohorts[36,46] which showed that any mutations were not found within both regions. This findings may partially provide a likely explanation for why relapse after antiviral therapy is so prevalent in Korean patients[48] and also suggest that these patients should be treated with newer NAs, such as tenofovir (TDF), which is very potent and has a high genetic barrier to antiviral resistance.

Second, potential NAr mutations in our cohort were distributed in a non-random manner, as was shown in other studies[36]. The potential NAr mutations were found more frequently in the A-B interdomain overlapped with the HBsAg MHR region than in domain regions (7.50% vs 1.07%, P = 0.008) (Table 4), which was in line with the previous report[36] that potential NAr positions within this region might be hotspots of naturally occurring mutations in this treatment naïve population. Notably, significantly higher mutation frequencies were found in 2 overlapped “a” determinant positions (3.81%, 15/393) compared to non-“a” determinant region (0.55%, 27/4847, P < 0.001) (Table 4). These findings suggest that host immune pressure against B cells could contribute to the generation of potential NAr mutations[36].

Third, our data showed there was significant difference in overall frequency of potential NAr mutations between CH patients (2.09%) and HCC patients (3.17%, P = 0.003, Table 3). In particular, mutations at the 3 NAr positions (rt80, rt139, and rt204) seemed to be the most pronounced contributors to hepatocarcinogenesis in the Korean Cohort [CH (0%, 0/59) vs HCC (30.6%, 22/72), P < 0.001]. Of these, the YMDD-motif mutation at rt204 was reported to naturally occur in chronic HBV patients without antiviral treatment, such as lamivudine therapy, by several studies[49,50]. The other HCC-related mutation (rtL80I) was first introduced as a mutation associated with LMV resistance[51]. These authors found that these mutants were associated with increased viral loads accompanied by an elevation in serum aminotransferase activity and exacerbation of liver disease in every case. In line with the previous report[51,52], our data indicated that L80I might have contributed to clinical deterioration[52]. Notably, our findings that L80I was combined with the rtM204I/V mutations in all 5 patients (data not shown) and L80I was also significantly related to increased HBV replication (Table 6) suggested that this mutation might play a role in compensating for the defective replication of rtM204I/V. Thus, our finding regarding relationships of exacerbation of liver disease with rtL80I and rtM204I/V in treatment naïve patients may be primarily attributed to the co-selection of these two mutation types. These results suggest that potential NAr mutations may contribute to hepatocarcinogenesis, possibly via increases in HBV replication fitness or evasion of B cell immune responses against HBsAg.

In conclusion, our data showed that potential NAr mutations, including the classical antiviral resistance mutations, were very prevalent in treatment naïve Korean patients compared to populations from other countries. Naturally occurring potential NAr mutations may contribute to liver disease progression (particularly HCC generation) in Korean chronic patients with genotype C2 infections and provide a likely explanation for why patients with advanced liver disease are difficult to treat with NAs. Additionally, we identified 3 HCC-related NAr mutations (L80I, N139K/T/H and M204I/V).

The three HCC-related NAr mutations (L80I, N139K/T/H and M204I/V) found in this study could be applied as markers of molecular detection method for the HCC of HBV infected chronic patients in the future.