Spontaneous tumor regression is an extremely rare phenomenon in the oncology field. However, there are several case reports resulted in the regression of hepatocellular carcinoma (HCC) and the accumulation of clinical information and analyses of the mechanism can contribute to the development of a novel therapy. For this purpose, we have carefully reviewed 23 cases of spontaneously regressed HCC published in recent 5 years and our case. The information regarding the tumor size, tumor marker, treatments, etc., have been summarized. The mechanism of spontaneous regression has been discussed to date and presumed to be due to many factors, including hypoxia and immunological reactions. In this careful review of the 24 cases based on the clinical information, hypoxia, systemic inflammation, and both upon spontaneous regression were seen in 3, 8, and 4 cases, respectively among the 15 cases for which the information regarding the proposed mechanisms are available. Recent development of immunotherapeutic approaches in oncology shows promising results, therefore, accumulation of additional cases and analysis of mechanisms underlying the spontaneous regression of HCC are essential and could lead to the development of a new generation of immunotherapies including antibodies directed against immune reactions.

Core tip: Spontaneous tumor regression of hepatocellular carcinoma (HCC) have been reported in several reports although rare. The analyses of the mechanisms underlying this phenomenon is the potential target for the novel therapeutic methods for HCC. For this purpose, we have carefully reviewed 24 cases of spontaneously regressed HCC including cases published in recent 5-years and our case. The minute clinical information and clinical courses are reviewed and summarized. Based on the information, hypoxia and/or systemic inflammation are involved in all cases for which the information regarding the proposed mechanism is available. An accumulation of additional cases and the analysis of mechanism underlying the spontaneous regression of HCC could lead to the development of new therapeutic strategy for HCC.

Hepatocellular carcinoma (HCC) is the most common histological type of primary liver cancer. It is the fifth most prevalent type of cancer and the second most common cause of cancer-associated mortality in males worldwide; it is also the seventh most commonly diagnosed cancer and the sixth greatest cause of cancer-associated mortality in females worldwide[1]. Approximately 70%-80% of HCCs develop in patients with liver cirrhosis[2]. Although many treatment options are available, the prognosis of patients with advanced HCC remains poor. Patients diagnosed at an early stage may achieve a 5-year survival rate of approximately 50%; however, those diagnosed at an intermediate to advanced stage have a 20%-50% survival at 3 years, and those diagnosed at the terminal stage usually die within 6 mo[3].

The therapeutic options for HCC include resection, radiation, radiofrequency ablation, transarterial chemoembolization (TACE), and systemic chemotherapy including molecular targeted medicine, sorafenib. TACE showed anti-tumor effect by reducing the arterial blood supply to the tumor[4,5]. The resected specimen of HCC after TACE had a liquefied necrotic region with focal hemorrhage, accompanied by non-specific inflammatory infiltrates containing foamy histiocytes and lymphocytes at the tumor periphery as reported in a study[6].

Spontaneous tumor regression was firstly reported by Cole and Everson in 1956[7], and was defined as a partial or complete involution of a malignant tumor in the absence of the application of a specific therapy. Spontaneous tumor regression is a very rare phenomenon, with an incidence rate of one out of every 60000-100000 cases[8]. Conventionally, malignant melanoma, neuroblastoma, and cancer of the kidney are the most frequent types of tumors presenting this phenomenon[8]; however, in recent reports, lung and liver cancers are also considered to be the frequent types of cancer[9]. Spontaneous regression of HCC was defined as an involution of HCC without any therapies and first described in 1972[10]. The mechanism of spontaneous regression may include hypoxia and immunological reaction which we often find in the liver tissue treated with TACE, however, the clear evidences remain unclear and the accumulation of additional cases is essential to develop a novel treatment approach for HCC. However, there are only a few reports summarizing these information and therefore, we have carefully reviewed 23 cases of spontaneously regressed HCC recently published in 5-years, and additional our case to summary information.

A PubMed (National Center for Biotechnology Information at the National Institutes of Health in Bethesda, Maryland, United States) was used for performing search using the key words “spontaneous regression” or “spontaneous remission” and “hepatocellular carcinoma” to extract studies published in recent 5 years. Fifty four reports were included in the initial search; reports that were not published in English literature and not describing spontaneous regression were excluded. Finally, a total of 20 reports and 24 cases including our recent case that matched the definition of spontaneous regression of HCC were reviewed (Table 1)[11-30]. Written informed consent was obtained from the patient for reporting their clinical information.

Among the cases for which the information is available, the etiologies of liver disease of these cases were alcoholic abuse in 5 patients, hepatitis B viral infection in 6 patients, hepatitis C viral infection in 6 patients, non-alcoholic steatohepatitis (NASH) in 2 patients, and hepatitis C viral infection plus alcoholic abuse in 1 patient. The background liver conditions were chronic hepatitis in 8 patients, liver cirrhosis in 6 patients, and normal liver (without hepatitis and fibrosis) in 1 patient (Table 1). Oquiñena et al[33] also reported 3 patients of who expressed wide range of tumor markers, as well as various liver diseases and background conditions and suggested the possibility that the spontaneous regression of HCC may not be associated with the level of tumor marker expression or the background liver disease. These results suggest that the spontaneous regression of HCC can frequently be seen in male in East Asian countries although various patterns were seen in tumor size, etiology, background of liver condition.

The median size of HCC before spontaneous regression was 38.5 mm with a wide ranges of 12-200 mm. Among these, tumors less than 30 mm were diagnosed accidentally (30.0%) which is higher than that of the previously published literatures[12,18,23] , 0%-11.1%, and this change is based on the advances in imaging modalities and are not associated with subjective symptoms. The main tumor was found in the right lobe of the liver in 16 patients and left lobe in 7 patients, and no significant tendency regarding the location of the tumor was seen. The metastatic tumors were found in extrahepatic lesions, for e.g., omentum, lung, lymphnodes, adrenal glands, in 9 patients and intrahepatic in 12 patients; most of these patients showed the reduction or disappearance of the metastatic regions as well as the primary tumor in the liver. Impairment of blood flow of the portal vein and/or hepatic artery were observed in 8 patients (Table 1). Tumor markers including alpha-fetoprotein (AFP) and/or des-γ-carboxy prothrombin (DCP) showed a significant decrease upon the spontaneous regression in 16 patients (Table 1).

In our case, a 78-year-old Japanese man with chronic hepatitis with a background of NASH and chronic renal failure on hemodialysis. Following an extended right hepatectomy, a 20 mm stump recurrence of HCC (Figure 1A and B) and a metastasis of surrounding lymph nodes (Figure 1D and E) was detected on dynamic computed tomography (CT). Tumor marker levels were increased (AFP, 2204 ng/mL; DCP, 46 mAU/mL) at that point. The patient was admitted to our hospital for interventional therapy three months after the CT and was found for the spontaneous regression of HCC and metastatic tumor in the lymphnodes without any therapy (Figure 1C and F) with significant reduction of AFP to a level below the measurement sensitivity (Table 1). 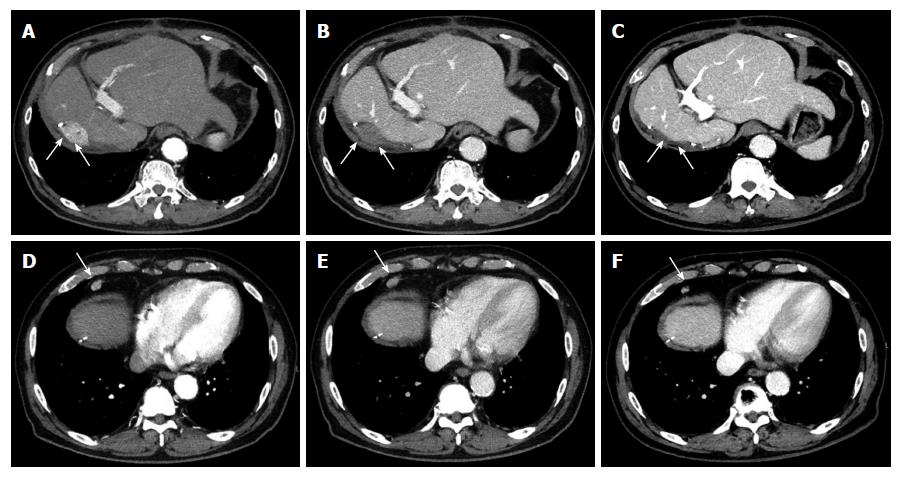 In our case, immunological reaction and hypoxia can be the reason for spontaneous regression because the size and contrast enhancement of extrahepatic lymphnode metastasis significantly reduced upon the regression of intrahepatic lesions (Figure 1D-F).

Tumor hypoxia is an intuitively appealing mechanism as it mirrors the established treatment modalities for HCC (TACE, sorafenib, etc.)[34]. Tumor thromboses of the hepatic artery[13,20,36] and portal vein[13,20,23], hepatic angiography[37], rapid tumor growth[14,38,39], and hepatic arterioportal shunts[18] are considered to directly induce an ischemic change leading to hypoxia, nutrition impairment, and dehydration in tumor. Interestingly, there are a few patients experienced profound systemic hypoperfusion associated with a massive gastrointestinal hemorrhage[40,41], hemodialysis[42,43], and surgical invasion[44], which also resulted in the spontaneous regression of the tumor. Uenishi et al[45] reported that the tumor was completely necrotic and had a thick fibrous capsule, in the tissue resected following the spontaneous regression of HCC; multiple inflammatory cells had also infiltrated into the tumor which is similar pattern with those found following embolization of HCC. Moreover, Matsuoka et al[20] reported the spontaneous regression of tumor with portal vein tumor thrombosis confirmed by the histopathological analyses of surgically removed tissues. These results indicate that the hypoxia in the tumor tissue may contribute to the spontaneous regression of tumor.

It is well known that immunological reactions inhibit tumor growth, including HCC. Immunological reactions are reported to be the main mechanism of spontaneous regression of HCC[17,34]. Abstinence from alcohol[12,46,47] and smoking[12], herbal medicines[11,25], prolonged fever[26,48,49], antidiabetics[50], and vitamin K administration[51] are considered to induce systemic immunological reaction with various patterns. Evdokimova et al[52] reported that APC-specific cluster of differentiation (CD) 4 positive T lymphocytes exhibit an anti-tumor capacity for HCC. In addition, Wada et al[53] reported that patients of HCC with marked inflammatory cell infiltration are associated with a better prognosis compared to without infiltration, which can be attributed to the anti-tumor effect induced by cellular immunity of CD8 positive and CD4 positive T lymphocytes. Furthermore, in spontaneous HCC regression case reports, an increase in interleukin (IL)-18[54], tumor necrosis factor (TNF)-alpha[55], and CD163 positive macrophages[21] were also reported and suggested the involvement of immunological reactions. These reports indicate that antitumor immunity can improve the prognosis for HCC under some conditions and the minute analyses of the mechanisms of spontaneous tumor regression can contribute to develop the novel therapeutic strategy.

Among 24 reports, histological characteristics were available in 9 patients. Well differentiated, moderately differentiated, poorly differentiated, and combined tumors were seen in 2, 3, 3, and 1 patients, respectively. Although several cases described no relapses during the long-term follow-up without any additional therapies after the spontaneous regression[17,25]; however, tumor remnant[29] and recurrences[14,56] were also observed in some cases.

The minute review for spontaneous regression of HCC showed that the spontaneous regression of HCC can frequently be seen in males in East Asian countries. Their tumors varies in terms of histological types, size, and clinical courses. Additional therapies following the spontaneous regression should be considered. The mechanisms might include hypoxia and immunological responses as previously reported. Since immunotherapeutic approaches in oncology may be most efficacious for cancers susceptible to intrinsic immune modulation[57,58] and recently, an increasing understanding of tumor immunogenicity spurred the development of novel classes of immune-targeted therapies, including the inhibition of co-stimulatory pathways mediated by cytotoxic T lymphocyte-associated antigen-4, as well as the programmed death-1 (PD-1) receptor and its ligand PD-L1[22]. Based on these progress, the analyses of mechanisms involved in the spontaneous tumor regression might contribute to develop a novel therapies for HCC. Therefore, it is clear that the accumulation of additional cases and analyses are necessary.