Core tip: Gallstone abscess resulting from spilled gallstones is a rare complication following laparoscopic cholecystectomy. We report a rare presentation of gallstone abscess due to spilled gallstones following laparoscopic cholecystectomy, mimicking a retroperitoneal sarcoma in a 59-year-old male. Recognizing the patient information about a history of laparoscopic cholecystectomy and sharing the patient information with radiologists can make an accurate diagnosis and avoid misinterpretation when the diagnosis is equivocal in radiologic imaging. Clear documentation of gallbladder perforation and gallstone can help with diagnosis of the complication and for correct management. Five noteworthy features are discussed in this paper.

Our institutional review board approved the reporting of this case. A 59-year-old male was admitted to our clinic with a 1-mo history of worsening right-sided constant abdominal pain. Outside abdominal sonography showed a 4.5 cm mass-like lesion in the sub-hepatic space. He had no significant past medical history apart from a history of laparoscopic cholecystectomy about 5 mo previously. Laboratory workup revealed a white blood cell count of 7500/mm3. All other laboratory findings including liver function tests, amylase and lipase were within normal limits. Tumor makers were normal. The hepatitis serologic markers were all negative. Computed tomography (CT) scan of the abdomen revealed a 4.9 cm × 4.6 cm right retroperitoneal mass invading the muscle wall and a 2 cm mass abutting the right kidney (Figure 1A-C). Magnetic resonance imaging (MRI) detected an ill-defined mass in the sub-hepatic space with subtle high signal intensity in T2 weighted image, low signal intensity in T1 weighted image and high signal intensity in diffusion weighted image (Figure 2A-C). With the suspicion that this mass was a retroperitoneal sarcoma, an exploratory laparotomy was performed. It revealed a severe adhesion around the mass containing purulent material and gallstones in the sub-hepatic space. Examination of frozen sections revealed acute and chronic inflammation with abscess and foreign body granuloma. Small abscess cavity found in the sub-phrenic space was destroyed using suction. Purulent materials were removed and several remaining stones were retrieved and copious irrigation was performed. Final pathology showed acute and chronic inflammation with abscess and foreign body granuloma (Figure 3). Postoperative recovery was uneventful. Six months later, the patient remains in good condition without any complaints. 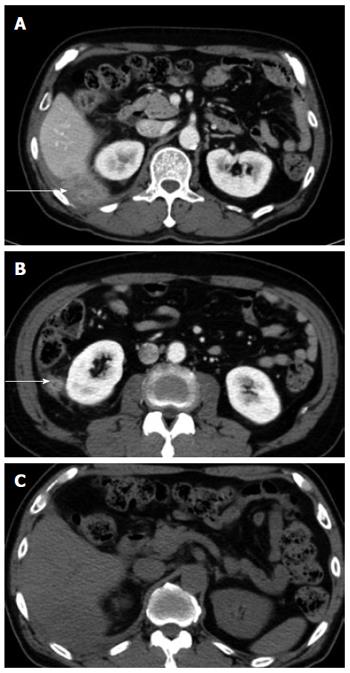 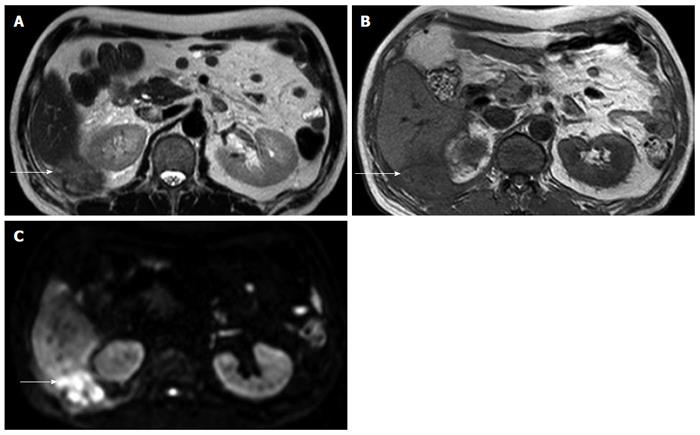 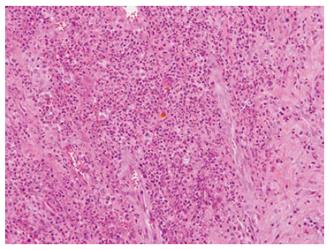 Zehenter et al[10] reported all possible complications due to spilled gallstones during laparoscopic cholecystectomy. The most common complication is intra-abdominal abscesses that are located most often in the sub-hepatic space or its retroperitoneal region, as occurred presently. Fistula formations, hernia sacs, ovary and fallopian tubes containing lost gallstones are among some of the rare complications reported for gallstone abscess. These complications are rarely fatal. Thus, converting to an open procedure is not indicated, because only 8.5% of patients will lead to a complication[10].

An inflammatory response can be induced, which features walling off by omentum and local fibrosis. Inflammation and infection are more common with pigment stones[11]. This is postulated to be due to the release of bacteria from within the stones as the body breaks down the stone matrix[12]. In our case, preoperative CT in the primary procedure showed emphysematous cholecystitis with multiple stones (Figure 4). Operatively, gallbladder empyema with a friable wall was found (Figure 5). The edematous and friable wall hindered grasping of the gallbladder during the traction and the dissection of the gallbladder from the liver, which lead to gallbladder perforation and gallstones and infected bile spillage. Despite every effort to remove remaining stones including extensive peritoneal lavage and aspiration with a large suction tube (Figure 6), gallstone abscess due to spilled stones occurred 5 mo after laparoscopic cholecystectomy. This highlights that care must be taken not to spread gallstones into more inaccessible sites, making retrieval even more difficult. Spilled gallstones can be retrieved easily in open cholecystectomy by irrigating the abdominal cavity and aspirating with a large suction tube or by collecting the stones with a sponge, which is difficult in laparoscopic cholecystectomy[13-15]. 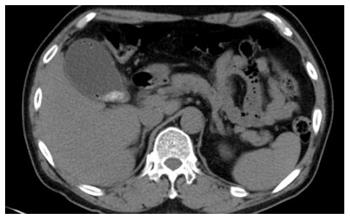 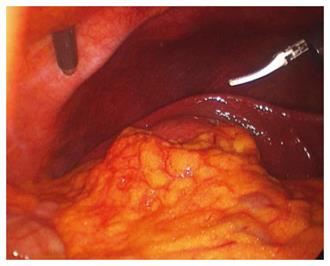 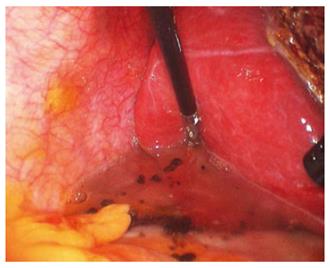 CT and MRI features of gallstones often include the presence of gallstones within the abscess, which is essential for a diagnosis[16]. Pigment stones with high calcium content are easily diagnosed with CT, whereas pure cholesterol stones and those with low calcium content may go undetected, as in our case[17]. Presently, CT and MRI were equivocal with the findings of retroperitoneal sarcoma. Spilled stones were not evident in radiologic imaging. Presence of the highly reflective echoes with posterior shadowing in the abscess cavity can be pathognomonic for gallstone abscess in patients with a history of laparoscopic cholecystectomy.

Abscess formation secondary to spilled stones mimicking a retroperitoneal sarcoma is rare. Despite their extreme rarity, the characteristic appearance of intra-abdominal abscesses from gallstones should be recognized because their radiographic appearance can mimic more severe disease, such as peritoneal metastasis[16,18]. Abscess formation from spilled stones after laparoscopic cholecystectomy has been reported to have an average duration of 4 mo to 10 years[19,20]. Presently, despite the history of laparoscopic cholecystectomy 5 mo before, gallstone abscess mimicking a retroperitoneal sarcoma in radiologic finding made the diagnosis difficult. Spilled gallstones around the liver may be confused with peritoneal metastasis or lymph nodes, having a similar appearance of round soft-tissue perihepatic nodules with a high attenuation peripheral rim on CT. Unenhanced CT may be useful in elucidating the calcified nature of these nodules. However, although the presence of calcification favours the diagnosis of spilled gallstones, some mucin producing tumours, such as tumours from the ovary and colon, can contain calcium[21]. Therefore, spilled gallstones should be considered in a patient with a history of LC presenting with an abdominal abscess.

In conclusion, retroperitoneal abscess formation secondary to spilled gallstones following laparoscopic cholecystectomy is a rare condition. If possible, every spilled gallstone during laparoscopic cholecystectomy should be retrieved to prevent such a rare complication. As in our case, preoperative radiological investigations may be equivocal. Clear documentation of gallbladder perforation and gallstone spillage is important, as is being vigilant to the possibility of stones during surgery.

A 59-year-old male with a history of laparoscopic cholecystectomy 5 mo prior presented with a 1-mo history of worsening right-sided constant abdominal pain.

The patient presented with a 1-mo history of worsening right-sided constant abdominal pain.

Acute and chronic inflammation with abscess and foreign body granuloma.

Intra-abdominal abscesses secondary to spilled gallstones are located most often in the sub-hepatic space or its retroperitoneal region. Fistula formations, hernia sacs, ovary and fallopian tubes containing lost gallstones are among some of the rare complications reported for gallstone abscess.

The characteristic appearance of intra-abdominal abscesses from gallstones should be recognized because their radiographic appearance can mimic more severe disease, such as peritoneal metastasis and retroperitoneal sarcoma.

Retroperitoneal abscess formation due to spilled gallstones following laparoscopic cholecystectomy is a rare condition. If possible, every spilled gallstone during laparoscopic cholecystectomy should be retrieved to prevent such a rare complication. Clear documentation of gallbladder perforation and gallstone spillage is important, as is being vigilant to the possibility of stones during surgery.

This case report is very useful to doctors in clinical practice. It is helpful to remind doctors to avoid the same mistake in clinical work.