Research Domain of This Article
Biochemistry and Molecular Biology

The mortality rate of gastric cancer worldwide is as high as 70%, despite the development of novel therapeutic strategies. One reason for the high mortality is the rapid and uninhibited spread of the disease, such that the majority of patients are diagnosed at a stage when efficient therapeutic treatment is not available. Therefore, in-depth research is needed to investigate the mechanism of gastric cancer metastasis and invasion to improve outcomes and provide biomarkers for early diagnosis. The mitogen-activated protein kinase (MAPK) signaling pathway is widely expressed in multicellular organisms, with critical roles in multiple biological processes, such as cell proliferation, death, differentiation, migration, and invasion. The MAPK pathway typically responds to extracellular stimulation. However, the MAPK pathway is often involved in the occurrence and progression of cancer when abnormally regulated. Many studies have researched the relationship between the MAPK signaling pathway and cancer metastasis and invasion, but little is known about the important roles that the MAPK signaling pathway plays in gastric cancer. Based on an analysis of published data, this review aims to summarize the important role that the MAP kinases play in the invasion and metastasis of gastric cancer and attempts to provide potential directions for further research and clinical treatment.

The mitogen-activated protein kinase (MAPK) is a type of serine/threonine protein kinase that is able to respond to multiple extracellular stimuli. Growth factors, insulin, environmental factors, and cytokines may all activate the MAPK kinases and lead to a broad intracellular response through the MAPK signaling pathway. The MAPK signaling pathway is one of the earliest signaling pathways to emerge during evolution and has been evolutionarily conserved. The pathway comprises the MAPK cascade protein kinases. Each typical single MAPK cascade pathway includes at least three core kinases, MAP3K, MAPKK, and MAPK[1]. The MAPK pathway exists in almost all eukaryotes and is involved in many cellular activities, including the regulation of gene expression, mitosis, metabolism, cell proliferation, apoptosis and cellular movements[2]. In view of the critical role of the MAPK pathway in cellular activities, the dysregulation of MAPKs often directly or indirectly leads to disease.

Local invasion and metastasis cause the majority of cancer deaths, and the distant metastasis of cancer accounts for the death of over 90% of patients[3]. Gastric cancer spreads easily to the adjacent organs and tissues, including the liver, pancreas, colon, lungs and bone, via the lymphatic system[4]. In fact, although much clinical effort is made, gastric cancer still has a mortality rate as high as 70%, because most gastric cancer patients are in the metastasis stage at the time of diagnosis[5].

Detachment of cancer cells from the primary tumor is the first step in tumor invasion and metastasis; subsequently, detached tumor cells are transported into and invade the blood and lymphatic vessels; and finally, cancer cells escape from the lumina of these vessels, settle in the target organs, and grow into macroscopic tumors[6-8].

The molecular process of tumor invasion and metastasis involves several essential events, such as the degradation of the extracellular matrix and the adhesion of cancer cells to the target with the help of focal adhesion kinase (FAK) and matrix metalloproteinases (MMPs)[9,10]. Mitogen-activated protein kinases are involved in cell migration and invasion events partially by regulating the expression and activation of MMPs and FAK[11-13]. Moreover, the MAPK pathway participates in invasion and metastasis through other types of signaling pathways. The aim of this article is to provide an introduction to the role that the MAPK pathway plays in gastric cancer metastasis and invasion based on the published data and provide recommendations for future research.

ERK is one of the first mammalian MAPK genes to be identified and cloned. The cDNAs of ERK1 and ERK2 were both cloned as early as the 1990s, and they share up to 83% of identical amino acids[14,15]. Moreover, there are other isoforms of ERK, including ERK3, ERK4, ERK5, and ERK7/8[16]. In this section, we will mainly discuss the most important members that play critical roles in cancer invasion and metastasis, ERK1/2.

The integral ERK/MAPK pathway can be roughly divided into three levels, which are summarized in Figure 1. Raf isoforms are the most well-studied kinases, constituting the highest level of the ERK/MAPK pathway, and are also known as MAPKKKs. Extracellular growth factors, insulin and G-proteins may activate the MAPKKKs by directly binding to the N-terminus of the Raf protein and transforming its structure through phosphorylation. Then, the activating signal is passed to the MAPKKs through the phosphorylation of two serine residues on the MEK1 or MEK2 protein. The signal is finally transmitted to ERK by MEK1/2 through the phosphorylation of tyrosine and threonine residues[17]. When the entire signaling pathway is completely activated in order, hundreds of ERK/MAPK pathway substrates are phosphorylated, and these events affect ERK-dependent cellular activities, including cell proliferation, differentiation, neuronal flexibility, cell viability, cellular stress response and apoptosis[2]. 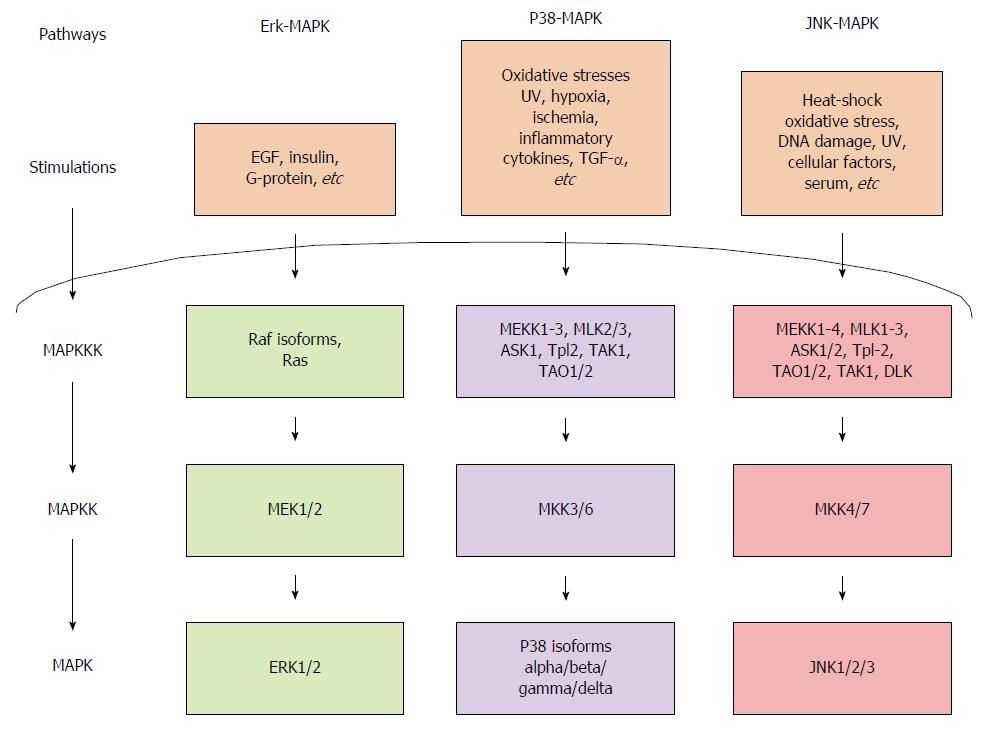 Introduction of p38: p38 alpha, beta, gamma and delta are the four well-known members of the p38 MAPK family, of which p38 alpha and p38 beta are expressed ubiquitously, whereas the p38 gamma and p38 delta have more restricted expression patterns[16].

The mammalian p38 MAPK pathway is affected by various environmental stressors, including oxidative stress, UV, hypoxia, ischemia, as well as inflammatory cytokines and transforming growth factor-α (TGF-α)[36]. MEKK1-3 (MEK kinase 1-3), MLK2/3 (mixed lineage kinase 3), ASK1 (apoptosis signal regulating kinase 1), Tpl2 (tumor progression loci 2), TAK1 and TAO1/2 (thousand and-one amino acid) are all MAPKKKs in the P38 MAPK pathway[37]. These MAPKKKs activate p38 by phosphorylating it at the Thr-Gly-Tyr motif through selective activation of MKK3/6. MKK6 phosphorylates all four members of the p38/MAPK family, whereas MKK3 phosphorylates p38 alpha, p38 gamma, and p38 delta but not p38 beta[37]. p38 is found in both the nucleus and the cytoplasm and translocates into the nucleus in response to certain types of stress. The P38 kinase affects certain types of downstream substrates after being activated, including cPLA2, MNK1/2, MK2/3, HuR, Bax, and Tau in the cytoplasm and ATF1/2/6, MEF2, Elk-1, GADD153, Ets1, P53 and MSK1/2 in the nucleus[37].

The p38 pathway has been implicated in a range of complex biological processes, such as cell proliferation, differentiation, migration, and apoptosis. Dysregulation of P38 in patients with solid tumors, such as prostate cancer, breast cancer, bladder cancer, liver cancer and lung cancer, is associated with advanced stages and low survival rates[38]. The p38 signaling pathway exhibits some anti-tumor effects in xenograft experiments[39,40]. In hepatocellular carcinoma, the activity of P38 is down-regulated in the cancer tissue compared with the adjacent normal tissue, and the tumor volumes are related to the p38 activity[41]. As a result, tumor cells must modulate p38 activity to achieve metastasis and invasion.

The epithelial-mesenchymal transition (EMT) process plays an important role during the initiation of metastasis. P38 signaling is involved in the regulation of EMT in several ways. For example, p38 participates in regulating the EMT activity in mammary epithelial cells and in primary ovarian tumors by separately regulating the phosphorylation of Twist1 and the expression of Snail[42,43]. P38 is also involved in ROS-triggered EMT, and this process may be reversed by the introduction of the p38 inhibitor SB203580[44,45]. The MMP protein family plays a critical role in remodeling the extracellular matrix during metastasis. There are many studies of the relationship between p38 and the expression of MMP family members in liver, prostate, breast and skin cancer cell lines. Following inhibition of p38 in these cell lines, cellular invasion decreases[46-48]. Many small molecules can regulate the metastasis and invasion of gastric cancer through regulation of the p38 signaling pathway. For example, S100A8 and S100A9, the low-molecular-weight members of the S100 family of calcium-binding proteins, induced gastric cancer cell migration and invasion involving p38 and NF-κB, whereas they did not affect cell proliferation and cell viability, which leads to an increase in MMP2 and MMP12 expression[49]. In addition, the widely used anti-tumor drug baicalein also inhibits gastric cancer cell invasion and metastasis by reducing cell motility and migration via suppression of the p38 signaling pathway[50].

The c-Jun N-terminal kinase (JNK), also known as stress-activated protein kinase (SAPK), was first identified and named as c-Jun transcription factor. The three isoforms of JNK, JNK1/2/3, were cloned in the mid-1990s. These three isoforms are encoded by three different genes, sharing more than 85% homology; these isoforms result from more than 10 splices and have molecular weights varying from 46 kD to 55 kD[51,52]. JNK1/2 is widely expressed in mammary tissues, whereas JNK3 is expressed mainly in nervous tissues, testis, and cardiac muscle[53]. All members of the JNK family are activated by various stimulating factors, such as heat shock, oxidative stress, DNA damage, UV, cellular factors, and serum[54]. The MAPKKKs in the MAPK/JNK signaling pathway include MEKK1-4, MLK1-3, Tpl-2, DLK, TAO1/2, TAK1, and ASK1/2. These MAPKKKs activate the MAPKKs, such as MKK4 and MKK7, through phosphorylation. Subsequently, activated MKK4/7 will activate JNK by phosphorylating its threonine and lysine residues[16].

JNK serves as an important kinase that regulates cellular activity; current research suggests that JNK plays opposite roles in cancer initiation and development[55]. Experiments demonstrated that a mouse model with a JNK2 deficiency shows a lower incidence of tumor initiation[56]; however, a mouse model with a JNK1 deficiency may generate tumors more frequently compared with control mice[57]. Therefore, small molecular inhibitors of JNK could not be easily used in cancer therapy.

We thank Dr. Yu-Yu Gu for the revision of the manuscript.