Coexistence of Crohn's disease (CD) and familial Mediterranean fever (FMF) is a rare condition and knowledge about this clinical situation is limited with a few case reports in the literature. The treatment of both diseases depends on their individual therapies. However, it is very hard to deal with this coexistence when CD is refractory to standard therapies. Ongoing activity of CD triggers the clinical attacks of FMF and the symptoms like abdominal pain interfere with both disease presentations which can cause problems about diagnostic and therapeutic approach. The main therapeutic agent for FMF is colchicine and diarrhea is the most common side effect of this drug. This side effect also causes problems about management of these diseases when both of them are clinically active. Here we report probably the first case in the literature with coexisting CD and FMF who was successfully treated by leukopheresis since he was refractory to conventional therapies for CD.

Core tip: Management of coexisting autoimmune diseases is sometimes problematic because of resistance to standard therapies. Coexistence of Crohn’s disease and familial Mediterranean fever is a rare condition, so the experience about their treatment is lacking. In our report we are sharing our treatment experience of a patient with this coexistence, where the case is refractory to conservative therapies and apheresis was applied as the last choice of treatment. This treatment modality seems to be the first in the literature for these diseases.

Crohn’s disease (CD) is a chronic inflammatory disorder which can affect any part of the alimentary tract, tending to attack in a transmural manner[1]. Perianal involvement, abscesses, strictures and fistula formation are the different complications that can be faced during the active stage of the disease. Evolving technology and growing knowledge are bringing new therapeutic modalities for this progressive and sometimes problematic illness. However, no curable treatment has been developed due to poorly understood disease pathology. Induction and maintenance of remission are the goal of therapy. Budesonid, 5-aminosalicylic acid (5-ASA) derivatives, systemic steroids, thiopurines and anti-tumor necrosis factor (anti-TNF) agents are the main medications that are currently available and effective for induction and maintenance of remission all over the world. Surgical intervention is frequently needed for patients with abscess, fistula and strictures or those who are refractory to standard therapies. However, surgical therapy is not often satisfactory as we can use in ulcerative colitis.

During the active stage of CD, extravasation of granulocytes and monocytes/macrophages and their migration to the intestinal wall play a crucial role in transmural inflammation as they are the main sources of inflammatory cytokines, especially TNF[2]. Depleting activated granulocytes and inflammatory mononuclear cells by using apheresis to induce remission is the main goal for granulocyte and monocyte adsorptive apheresis (GMA). GMA is an effective and safe therapeutic option for patients with inflammatory bowel diseases refractory to pharmacological therapy[3].

Familial Mediterranean fever (FMF) is the most prevalent monogenic autoinflammatory disease, affecting more than 100000 subjects worldwide, mainly in the Mediterranean region. Despite novel advances in genetic testing of mutations, the diagnosis of FMF is still based on clinical criteria that include symptoms such as abdominal and thoracic pain, family history and response to treatment with colchicine[4]. Nevertheless, according to our recent knowledge the finding of mutations in the MEFV gene is mandatory for a definitive FMF diagnosis.

Coexistence of FMF and CD is a rare condition although a limited number of publications suggest that MEFV mutations are more frequent among CD patients when compared to healthy controls[5]. The treatment for both diseases mainly consists of using colchicine combined with 5-ASA derivatives, corticosteroids, thiopurines and biological agents.

Here we report the first case in the literature with coexisting FMF and refractory CD successfully treated by using GMA for both diseases.

A 20-year-old male patient was admitted to our clinic with complaints of abdominal pain, weight loss and diarrhea more than 20 times a day. Diarrhea was not bloody but contained mucus. The patient had a long and confusing medical history. He had complaints of chronic diarrhea when he was only 1-year-old. He has received medical therapy against amebiasis in a children's hospital. He had temporary improvement but mainly had the same complaints for more than two years. After an attack of bloody diarrhea and suspicion of perforation he underwent left hemicolectomy when he was 3-year-old. The pathological investigation of hemicolectomy specimen revealed chronic active colitis without any definitive diagnosis. The patient had same complaints after the first postoperative month. Mesalazine 50 mg/kg and prednisolon 2 mg/kg were initiated. Under medical therapy to induce remission he had flares of bloody diarrhea. The patient was reported to be mainly steroid dependent up to 9 years old. When he was 9 under mesalazine therapy, corticosteroids were initiated again to induce remission but he had a generalized tonic clonic convulsion. Cerebral evaluation by computed tomography (CT) magnetic resonance imaging, single-photon emission CT and as well as cerebrospinal fluid investigation revealed no abnormality. An electroencephalogram was consistent with pseudotumor cerebri. Corticosteroids were withdrawn and valproate sodium was initiated. After another flare of colitis azathiopurine was added to mesalazine and valproate sodium treatment at the age of 10. The patient showed growth retardation and was still steroid dependent for colitis. When he was 10 as he had involvement of total residual colon and distal ileitis, total colectomy + endorectal anastomosis (straight) + end ileostomy + Hartman procedure was performed. Pathological assessment showed transmural involvement of chronic mononuclear inflammation which suggests the diagnosis of CD. Under medical therapy with mesalazine and azathiopurine the patient complained of fever, arthralgia and pleuretic chest pain after the first year of extended surgical operation. MEFV gene mutation analysis was then performed and he was found to have a homozygous M694V mutation. Familial Mediterranean fever was diagnosed and colchicine therapy was added to his treatment regimen. Despite an effective dose of colchicine he had fever attacks, and due to increase in stool number he had to discontinue colchicine sometimes. While he was 15 years old, he had perianal complaints which were diagnosed as perianal involvement of CD. As he was resistant to all therapies, adalimumab (ADA) 40 mg/2 weeks was initiated. He had 9 cycles of ADA with dose modification but remission induction could not be accomplished. ADA therapy was discontinued and he was on mesalazine, AZA and steroids when he was admitted to our clinic. Physical examination revealed growth retardation, dehydration, malnutrition and perianal swelling and inflammation (Figure 1). Colonoscopy with biopsies up to distal 30 cm revealed ileal and rectal ulcerations and inflammation. Abdominal CT showed intestinal thickening in distal ileal and anastomotic regions (Figure 2). CD activity index (CDAI) was calculated to be 397. He also had fever and chest pain attacks during hospitalization. A total of 12 cycles of GMA by using Cellsorba filters, twice weekly, were performed as the patient still had medical therapy resistant luminal and perianal CD with coexisting FMF which has not been possible to be treated properly. The ileal and rectal biopsy specimens showed findings of active CD without any sign of amyloidosis. After 12 cycles of GMA, the clinical symptoms and laboratory findings improved and CDAI was found to be 139. The patient did not have fever and chest pain attacks since GMA therapy. AZA and mesalazine were continued to sustain remission. The patient is still in remission after 3 mo of follow-up and is still attack free in terms of FMF. 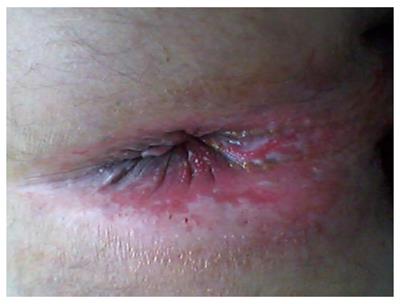 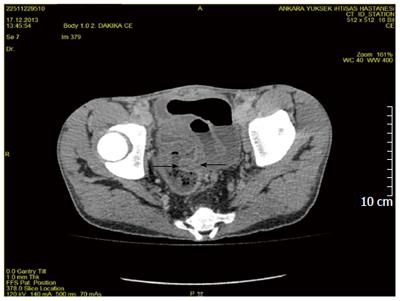 Coexistence of CD and FMF is a rare condition. Combination of individual therapies of both diseases is the main choice of treatment in this situation. However, the resistance of CD to standard therapies brings difficulties to the management of both diseases as colchicine itself induces diarrhea as a side effect. GMA is available in Europe and Japan for the treatment of patients with active inflammatory bowel disease (IBD) that may have become refractory to standard drug based medication, including TNF-α blockers[6]. GMA was first used for CD in the literature by Fradji et al and Gonzalez Carro et al showed in a case report that weekly GMA when added to scheduled infliximab (IFX) maintenance therapy was effective in a CD patient while disease was active despite IFX therapy[7]. In another case report form Japan, Fukunaga et al[8] also showed similar successful induction of remission in an IFX refractory patient with additional weekly GMA therapy. Further, intensive GMA involving two sessions per week has been recently shown to be more effective than conventional weekly GMA for refractory IBD[9]. In addition, GMA does not have any high risk of serious adverse events. The use of GMA in IBD has been increasing during the last decade and new reports are emerging about efficacy and safety of this procedure[10,11].

In our case we have reported a patient with refractory CD and coexisting FMF with fever and pleural attacks. GMA was used mainly for induction of remission for CD but it was also found to be beneficial for FMF attacks. Our patient seems to be the first patient in the literature who was successfully treated by GMA for both CD and FMF. It is a novel finding because we do not have any data about the use of apheresis among FMF patients. Positive response of FMF to GMA therapy may be a result of depletion of systemic inflammatory state. Also, the beneficial effect can be coincidential, but it is still promising and needs to be evaluated carefully. The coexistence of these two inflammatory diseases is a challenging problem and GMA may be a new and encouraging answer. As the patient could not use colchicine properly due to side effects, he had limited choices of treatment for FMF. Luckily, rectal specimens did not show amyloid deposits which is the most important complication of this disease, although the patient had FMF for more than 9 years. Long term maintenance with GMA for both CD and FMF is not possible, but during remission of CD the patient would have a chance to initiate colchicine again which will be a definitive therapy for FMF. We have already known the beneficial effect of GMA in CD from the literature. However, the effect of GMA in FMF still seems to be mysterious. Apart from the mechanism of action from the patient's point of view, it seems to be a good single shot for two targets.

A 20-year-old male with coexisting Crohn's disease (CD) and familial Mediterranean fever (FMF) had complaints of abdominal pain and diarrhea.

An abdominal computed tomography scan showed diffuse thickening of the intestinal wall at the site of previous anastomosis, which revealed recurrence and active disease.

Ileal and rectal biopsy specimens showed findings of active CD without any sign of amyloidosis.

There is not any report on treating both diseases by using apheresis.

GMA is variant of apheresis that aims to deplete granulocytes and monocytes in the circulation to control systemic inflammatory activity.

This report mentions a successful experience of treating coexisting active CD and FMF by using GMA, which is a novel procedure for this situation.

This report suggests a new therapeutic approach for two diseases that are refractory to standard therapies.