AIM: To investigate the accuracy of the strain histogram endoscopic ultrasound (EUS)-based method for the diagnostic differentiation of patients with pancreatic masses.

METHODS: In a prospective single center study, 149 patients were analyzed, 105 with pancreatic masses and 44 controls. Elastography images were recorded using commercially available ultrasound equipment in combination with EUS linear probes. Strain histograms (SHs) were calculated by machine integrated software in regions of interest and mean values of the strain histograms were expressed as Mode 1 (over the mass) and Mode 2 (over an adjacent part of pancreatic tissue, representing the reference area). The ratio between Mode 2 and Mode 1 was calculated later, representing a new variable, the strain histogram ratio. After the final diagnosis was established, two groups of patients were formed: a pancreatic cancer group with positive cytology achieved by fine needle aspiration puncture or histology after surgery (58 patients), and a mass-forming pancreatitis group with negative cytology and follow-up after 3 and 6 mo (47 patients). All statistical analyses were conducted in SPSS 14.0 (SPSS Inc., Chicago, IL, United States).

RESULTS: Results were obtained with software for strain histograms with reversed hue scale (0 represents the hardest tissue structure and 255 the softest). Based on the receiver operating characteristics (ROC) curve coordinates, the cut-off point for Mode 1 was set at the value of 86. Values under the cut-off point indicated the presence of pancreatic malignancy. Mode 1 reached 100% sensitivity and 45% specificity with overall accuracy of 66% (95%CI: 61%-66%) in detection of pancreatic malignant tumors among the patients with pancreatic masses. The positive and negative predictive values were 54% and 100%, respectively. The cut-off for the new calculated variable, the SH ratio, was set at the value 1.153 based on the ROC curve coordinates. Values equal or above the cut-off value were indicative of pancreatic malignancy. The SH ratio reached 98% sensitivity, 50% specificity and an overall accuracy of 69% (95%CI: 63%-70%). The positive and negative predictive values were 92% and 100%, respectively.

Core tip: Endoscopic ultrasound quantitative elastography strain histograms (SHs) are a recently developed method for non-invasive differentiation of pancreatic masses. In a prospective single center study, 105 patients with pancreatic masses and 44 controls were evaluated. For SH measurements, Hitachi software was used and applied for the first time in a clinical study as far as we know. We determined the accuracy of the method and a cut-off value between malignant pancreatic tumors and mass-forming pancreatitis. A new variable, the SH ratio, is calculated in an attempt to improve the sensitivity, specificity and accuracy of the method.

Despite numerous imaging techniques, differential diagnosis of focal pancreatic masses is still a diagnostic problem in a significant number of patients.

In this setting, endoscopic ultrasound-guided fine needle aspiration biopsy (EUS-FNA) has high accuracy and traditionally represents the gold diagnostic standard[1-3], but it is not without risks and complications[4,5].

Multiple pathological processes including cancer can induce alterations of tissue stiffness, changing the elastic properties in comparison with surrounding tissues. Elasticity imaging and measurement provide a significant adjunct to current imaging methods[6]. The elastic properties of tissue are assessed by comparing color images superimposed over B mode scans before and after compression, yielding the local index of tissue elasticity[7]. This method was implemented and used in endosonography with the goal of differentiating tissue changes without risks related to FNA.

Modules for qualitative EUS elastography were incorporated into the first generation of commercially available ultrasound platforms in combination with adequate EUS probes. Tissue stiffness analysis for pancreatic masses using a three-point scoring system was developed by Giovannini et al[8,9] and refined later to a five-point system, reaching better results with higher accuracy. A similar four-point system was proposed by Iglesias-Garcia[10]. The method demonstrated promising results in the evaluation of pancreatic masses[9,10], although poor accuracy was reported in one study[11] and the differentiation of chronic pancreatitis from hard tumors was not satisfactory in another[12].

Some ultrasound platforms of the latest generation have integrated software for strain (hue) histogram measurement, automatically calculating the graph in real time.

The aim of this study was to evaluate the diagnostic value of the strain histogram in the patients with pancreatic masses and to determine the cut-off value between pancreatic malignancy and focal pancreatitis using software integrated into the commercially available ultrasound platforms.

As the next step we intend to calculate a new variable, the strain histogram ratio, by analogy to the strain ratio, calculating the ratio between the SH over an adjacent part of pancreatic tissue outside the mass and the SH over the mass.

The investigation was organized as a prospective single center study from January 2011 to March 2013 in the gastroenterology department of the University Hospital Centre Zagreb, an academic center. The study was approved by the hospital ethics committee. Written informed consent for participation in the study was obtained from all patients included in the study. Two experienced EUS examiners performed all endosonographic procedures and elastography measurements. Elastography images were recorded using Pentax FG-38 UX and EG-3870 UTK EUS linear probes in combination with Hitachi 8500 and Hitachi Avius ultrasound machines.

The inclusion criteria were: patients of both sexes over 18 years of age with solid pancreatic masses diagnosed with imaging techniques who accepted participation in the study. The exclusion criteria were: tumors with cystic or liquid components. In total 149 patients were included in the data analysis, 105 with pancreatic masses and 44 controls. Strain histograms were calculated automatically by integrated software in regions of interest manually selected by the endosonographer and expressed as the mean values (Mode 1 over the mass, and Mode 2 over an adjacent part of homogenous pancreatic tissue representing a reference area) (Figure 1). In the control group, two neighboring areas of pancreatic tissue were selected for histogram measurements (Figure 2). Three measurements were performed on the new elastography Figure recorded during the examination, and the average values of Mode 1 and Mode 2 for all three measurements were used for the statistical analysis. 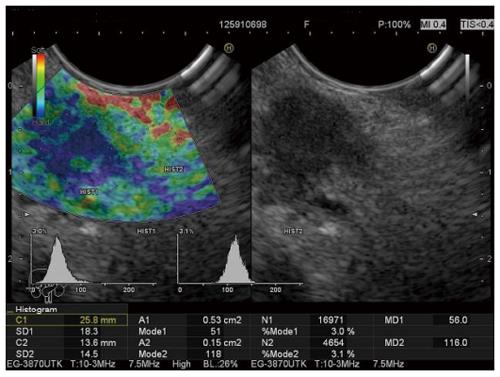 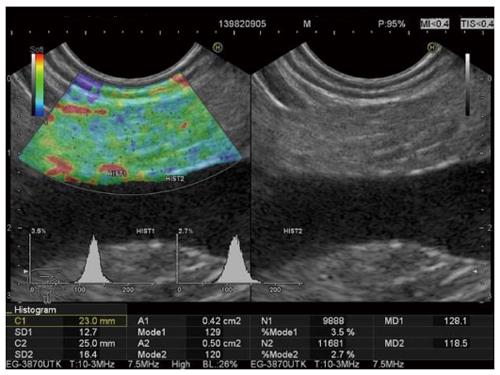 The diagnostic validity analysis included receiver operating characteristics (ROC) curve analysis, with specific values for the area under the curve, the significance of the area, and confidence intervals. Sensitivity (SS), specificity (SP), positive and negative predictive values, and positive and negative likelihood ratios are also expressed in the analysis. The calculation of the overall accuracy (ACC) of the prediction was based on previous parameters. The cut-off point for measurement the calculation of which is based on the coordinates of the ROC curve is also presented in the analysis. The positive likelihood ratio is calculated as sensitivity/1 - specificity. The negative likelihood ratio is calculated as 1- specificity/sensitivity. The overall accuracy is calculated as the sum of the positive and negative predictive values.

Statistical significance is set to P < 0.05, with all confidence intervals expressed at the 95% level.

The median age of the examined group of patients was 63 years (interquartile range: 54-70 years), of whom 76 were female.

Analyzing the sample according to cytology or histology after surgery and a follow-up period, 58/149 (39%) were finally considered to have pancreatic malignant tumors (53 with pancreatic carcinomas, 2 with neuroendocrine malignant tumors, 3 with metastatic carcinomas), 47/149 (31.5%) were classified as patients with pseudotumoral inflammatory masses, and 44/149 (29.5%) patients were control subjects without any clinical or endosonographic evidence of pancreatic disease. 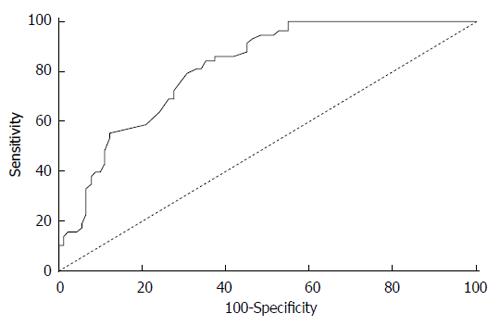 According to the ROC curve coordinates in Figure 4, the cut-off point for the Mode 2/Mode 1 ratio was set at 1.153. We determined the significance of the diagnostic validity for the new measure derived from the Mode 2/Mode 1 ratio (AUC = 0.843; P < 0.001; 95%CI: 0.782-0.903). All values above the determined cut-off point were classified as malignant. The variable therefore achieves high sensitivity where only 2% of patients having a malignant tumor would not be recognized, but as much as 50% of patients would be incorrectly classified as having a malignant tumor. The overall accuracy achieved with the Mode2/Mode 1 ratio is 69% (95%CI: 63%-70%) (Table 2). 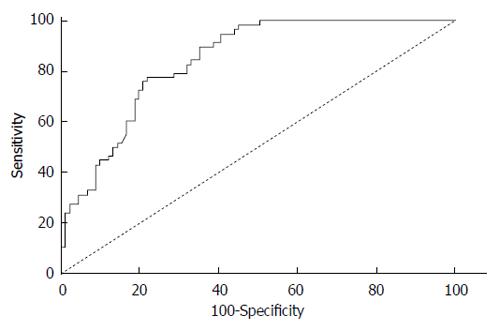 In the three published studies where strain histograms were used as the quantitative elastography method, post-processing software analysis of the elastography video was performed, and the average value of the strain histogram was calculated by a special computer program. A cut-off value was computed initially to distinguish malignant pancreatic masses from pseudotumoral or normal pancreatic tissue[19-21].

Hue histograms were calculated within manually selected regions of interest (ROIs) using a qualitative elastography image. The X-axis in a hue histogram represents tissue elasticity expressed numerically, and the y-axis represents the number of pixels in the ROI. The mean histogram value corresponds to the global hardness of the lesion expressed on a scale from 0 (softest) to 255 (hardest)[21].

Our investigation represents quantitative elastography analysis with strain histograms of pancreatic masses using commercially available integrated ultrasound machine software for the first time. This software also uses a scale from 0 to 255, but the scale is reversed with 0 representing the hardest tissue structure and 255 the softest. The results were obtained as an average value of measurements from the three Figures selected by the endosonographer.

The Mode 1 histogram measured over the tumor in our study showed high sensitivity in cancer detection, but also disappointingly low specificity, with modest overall accuracy (Figure 1: Patient with Mode 1 = 51, and Mode2/Mode1 = 2.31. Both values suggesting a malignant tumor confirmed by surgery). Slight improvements in specificity and overall accuracy were achieved using the new variable, the Mode2/Mode 1 ratio (Figure 5. Patient with Mode 1 = 102 suggesting inflammatory mass and Mode2/Mode1 = 1.35 suggesting malignant mass. Malignancy was confirmed by EUS-FNA). 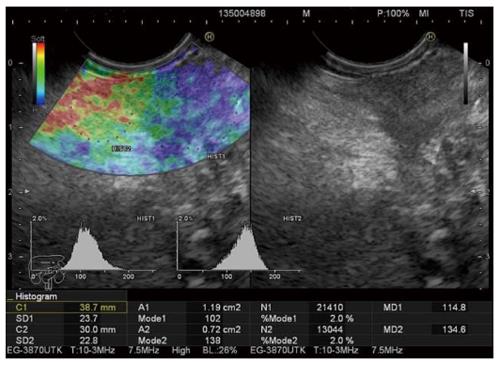 Explanations for the significant difference in specificity and accuracy achieved in our study in comparison with the results of previous studies using strain histograms as the measurement method could be just speculative at the moment. More studies on Hitachi ultrasound machines with integrated software are needed, comparing whether other analyses possible with the data processing method of Săftoiu et al[19-21] on the same group of patients.

A few recent studies have shown that use of endoscopic ultrasound-based quantitative hue histogram methodology represents a useful tool in the differentiation of pancreatic malignancies from mass-forming pancreatitis.

Previous studies used artificial neural network processing of digitalized endoscopic ultrasound elastography videos, obtaining average values for hue histograms with a special computer program. This method has shown very good sensitivity with satisfactory accuracy, but a limitation of this type of analysis is its availability to other investigators.

In this study, commercially available integrated ultrasound machine software was used for hue histogram analysis for the first time as far as we know. The authors’ determined the accuracy of the method and a cut-off value distinguishing between pancreatic malignant tumors and mass-forming pancreatitis. With the new calculated strain histogram ratio variable, the sensitivity, specificity and accuracy of the method were all improved.

In hospitals with adequate equipment this method could assist in distinguishing malignant from benign pancreatic lesions.

The study is very interesting. In this paper, a new evaluation approach named the strain histogram ratio was established. The cut-off, sensitivity and specificity for this method were calculated. It is a remarkable step forward. Good work.