We report a case of phlegmonitis of the esophagus, stomach, and duodenum in patient in an immunocompromised state. Culture of gastric juice and blood yielded Bacillus thuringiensis. This case showed that even low-virulence bacilli can cause lethal gastrointestinal phlegmonous gastritis in conditions of immunodeficiency.

Core tip: This is the first reported case of Bacillus thuringiensis as the suspected causative agent of rapidly progressive and fatal phlegmonitis of the esophagus, stomach, and duodenum in patient in an immunocompromised state. Even low-virulence bacilli may be a causative pathogen of gastrointestinal phlegmonitis in patients in an immunocompromised state.

Phlegmonous gastritis is a rare acute and occasionally fatal bacterial infection of the gastric wall. Although a number of different bacterial organisms have been implicated as etiologic agents, Bacillus thuringiensis has not been reported as such an agent. We report a case of fatal phlegmonous gastritis with Bacillus thuringiensis suspected as the pathogen of intestinal infection. To the best of our knowledge, this is the first reported case of this type.

A 74-year-old man experiencing acute epigastric pain and nausea after a midnight meal was rushed to an emergency hospital 1 h after onset. He had past histories of myelofibrosis and stage III multiple myeloma[1]. He had neutropenia as a result of myelosuppressive chemotherapy, and on admission to hospital, his white blood count was 800 cells/mm3 with an absolute neutrophil count of 300 cells/mm3. Compared with a screening computed tomography (CT) scan performed 20 d before onset (Figure 1A), abdominal CT performed 4 h after onset revealed gastric wall hypertrophy (Figure 1B). Abdominal CT performed 6 h after onset showed continued significant spread of the wall hypertrophy to the total stomach (Figure 1C), and upper gastrointestinal endoscopy revealed ischemic change over the entire gastric mucosa. He was transferred to our critical care center 9 h after onset. On arrival, his temperature was 36.7°C, blood pressure was 98/69 mmHg, pulse rate was 113/min, and respiration rate was 36/min, indicating a shock state and systemic inflammatory response syndrome. Physical examination found local muscular guarding in the epigastric area. His blood chemistry data showed kidney and liver dysfunction, with a creatinine level of 2.6 mg/dL, alanine aminotransferase level of 77 IU/L, and aspartate aminotransferase level of 76 IU/L. Arterial blood gas analysis revealed severe acidosis, with a pH of 7.14 and blood lactate level of 117 mg/dL. Abdominal CT performed at 10 h after onset showed progression of wall hypertrophy to the lower esophagus and total stomach and duodenum and the presence of intramural gas (Figure 1D, arrowheads). Contrast enhancement of the gastric wall was very poor. Repeat upper gastrointestinal endoscopy showed extensive ischemic change to the mucosa and necrosis extending from the lower esophagus to the stomach and duodenal bulb (Figure 2). A diagnosis of acute phlegmonitis of the esophagus, total stomach, and duodenum was made based on the CT images. Gram staining of the patient’s gastric juice revealed Gram-positive cocci and Gram-negative rods, and Gram-positive rods were also highlighted (Figure 3). We isolated Bacillus species in both blood and gastric juice cultures and genetically confirmed them to be Bacillus thuringiensis by sequencing of PCR amplified products of the groEL region and by detection of Bt toxins. Therefore, we diagnosed the patient as having acute phlegmonitis of the esophagus, stomach, and duodenum due to Bacillus thuringiensis (B. thuringiensis). MICs determined with an automated system (MicroScan WalkAway; Siemens, Munich, Germany) included gentamicin, < 2 μg/mL (susceptible); cefazolin, < 4 μg/mL (susceptible); ciprofloxacin, < 0.5 μg/mL (susceptible); and imipenem, < 1 μg/mL (susceptible). 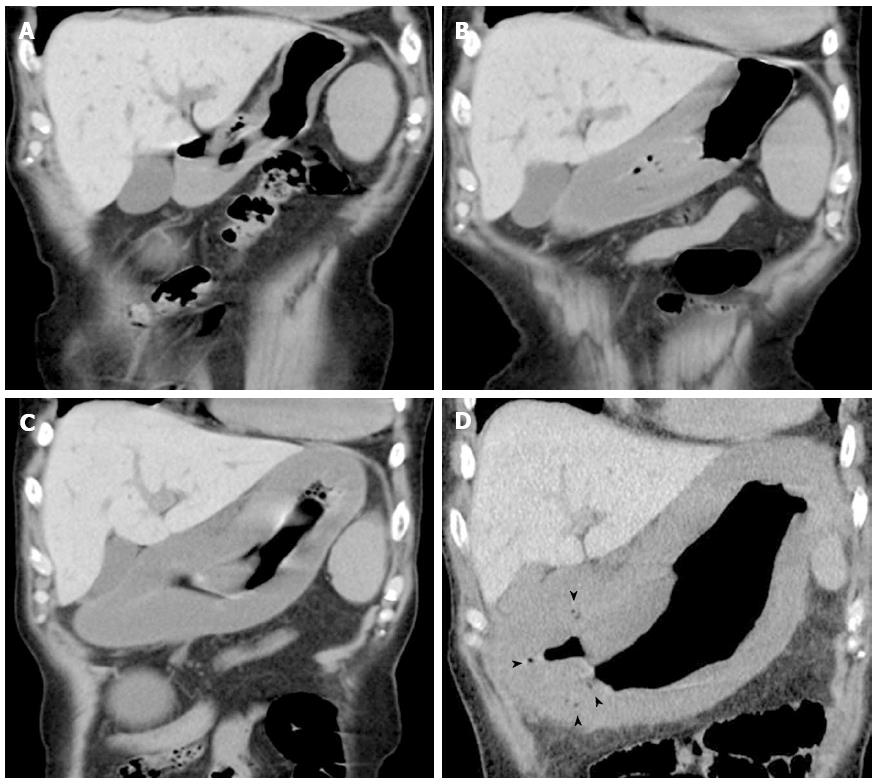 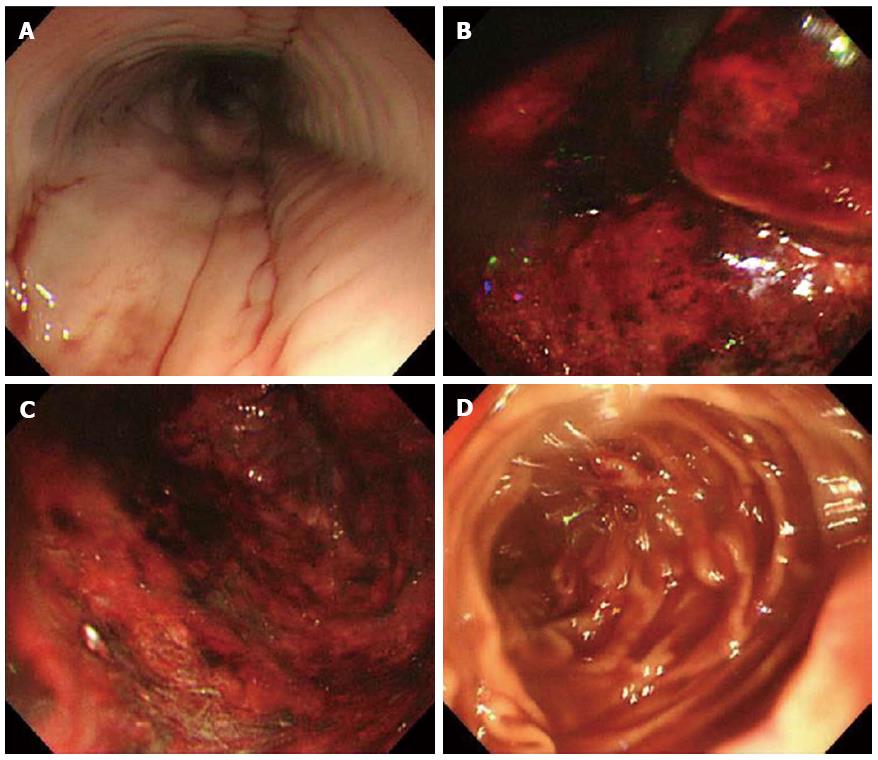 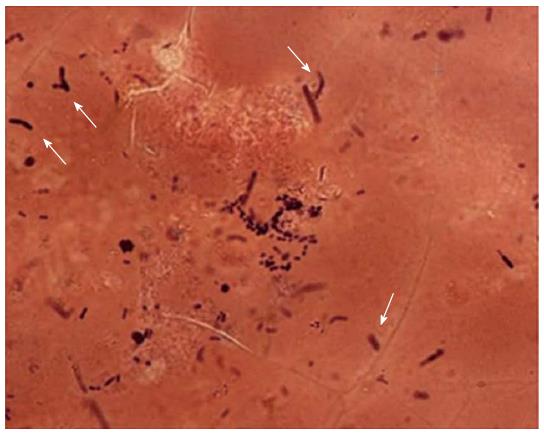 Despite mechanical ventilation and treatment with meropenem (1 g × 3/d intravenously) and fluid and vasopressor therapy, the patient rapidly deteriorated due to septic disseminated intravascular coagulation and multiple organ failure. He died 14 h after arrival (24 h after disease onset).

Phlegmonous gastritis is caused by bacterial infection invading the gastric wall. Phlegmonitis of the stomach was initially recognized by Cruveilhier in the early 18th century[2]. Although the pathogenesis of acute phlegmonous gastritis is unclear, several mechanisms are implicated, such as direct invasion through areas of injury and by hematogenous or lymphatic spread. Immunosuppression, alcoholism, achlorhydria, and infection are also reported as predisposing factors[3]. We considered that myelofibrosis, multiple myeloma, and neutropenia resulting from chemotherapy might have been involved in disease development as predisposing factors for our patient’s immunocompromised status.

Patients usually present with an acute abdomen and septicemia[6], and rebound tenderness or muscle guarding can be observed in advanced cases[7]. Other symptoms include nausea, vomiting, and prostration. CT findings also provide supporting evidence for the diagnosis[8]. In the present patient, we could clearly detect for the first time, to our knowledge, the time-dependent changes of the spread of fulminant phlegmonitis on screening CT scans. Thus, CT was useful in the early diagnosis of this patient’s phlegmonous gastritis.

Submucosal involvement is the most prominent histopathologic finding in phlegmonous gastritis. Snare biopsy specimens are generally more useful for diagnosis because the submucosa is included[9], but if transmural purulent infection is present in advanced cases, diagnosis may be made by culture of gastric juice, other organs, and blood, as in our patient[10].

Although primarily caused by β-hemolytic group A Streptococcus, phlegmonous gastritis can be caused by many other bacterial organisms[11]. B. thuringiensis, a naturally occurring organism commonly found in soil, has been used for almost half a century as a specific pesticide against various insects[12]. To our knowledge, there are no other published reports of intestinal infection by B. thuringiensis.

Overall, the reported mortality rate for patients with phlegmonous gastritis with medically treated localized disease is 17%, whereas that for diffuse disease is 60%[6]. Treatment resistance and rapid disease progression were reported to be associated with high mortality[7]. The factors common to all of the survivors were early recognition and the prompt application of antibiotic treatment or surgery[13].

In summary, in a patient with rapidly progressive and fatal phlegmonitis spreading to the esophagus, total stomach, and duodenum, B. thuringiensis was identified genetically from cultures of gastric juice and blood and was considered the causative pathogen. To our knowledge, this is the first reported case of B. thuringiensis relevant to intestinal infection. Even low-virulence bacilli may be a causative pathogen of gastrointestinal phlegmonitis in patients in an immunocompromised state.

A 74-year-old man with a history of myelofibrosis and stage III multiple myeloma presented with acute epigastric pain and nausea.

Abdominal computed tomography showed progression of gastric wall hypertrophy to the lower esophagus and total stomach and duodenum and the presence of intramural gas.

The patient was treated with mechanical ventilation and meropenem (1 g × 3/d intravenously) and fluid and vasopressor therapy.

Phlegmonous gastritis is caused by bacterial infection invading the gastric wall. Many bacterial organisms such as Staphylococcus spp. have been implicated as etiologic agents. Immunosuppression, alcoholism, achlorhydria, and infection are reported as predisposing factors. Phlegmonous involvement of the esophagus or duodenum beyond the stomach is extremely rare.

GroEL, one member of the heat shock protein family, which is highly conserved and essential to Bacillus, and its gene are used for detection and differentiation of cells belonging to the Bacillus spp. group. B. thuringiensis toxins are proteins produced by a bacterium that is lethal to insects.

The authors demonstrated for the first time data relevant to intestinal infection by B. thuringiensis. The data suggest that B. thuringiensis may have been one of the causes of the lethal pathological condition that occurred in a patient in an immunocompromised state.