Long-chain acyl-CoA synthetase (ACSL) family members include five different ACSL isoforms, each encoded by a separate gene and have multiple spliced variants. ACSLs on endoplasmic reticulum and mitochondrial outer membrance catalyze fatty acids with chain lengths from 12 to 20 carbon atoms to form acyl-CoAs, which are lipid metabolic intermediates and involved in fatty acid metabolism, membrane modifications and various physiological processes. Gain- or loss-of-function studies have shown that the expression of individual ACSL isoforms can alter the distribution and amount of intracellular fatty acids. Changes in the types and amounts of fatty acids, in turn, can alter the expression of intracellular ACSLs. ACSL family members affect not only the proliferation of normal cells, but the proliferation of malignant tumor cells. They also regulate cell apoptosis through different signaling pathways and molecular mechanisms. ACSL members have individual functions in fatty acid metabolism in different types of cells depending on substrate preferences, subcellular location and tissue specificity, thus contributing to liver diseases and metabolic diseases, such as fatty liver disease, obesity, atherosclerosis and diabetes. They are also linked to neurological disorders and other diseases. However, the mechanisms are unclear. This review addresses new findings in the classification and properties of ACSLs and the fatty acid metabolism-associated effects of ACSLs in diseases.

Fatty acids are a major source of energy in mammals. Given a sufficient oxygen supply, fatty acids can be degraded to CO2 and H2O in the body and large quantities of energy are released in the form of adenosine triphosphate (ATP), which can then be used by the organism. Exogenous or endogenous fatty acids are chemically quite inert and need to be activated to form acyl-CoA in the cell, outside the mitochondrion, before they enter a metabolic pathway. Acyl-CoA synthetase on the endoplasmic reticulum (ER) and mitochondrial outer membrane catalyzes the conversion of fatty acids to acyl-CoA in the presence of ATP, CoA and Mg2+.

ACSLs are characterized by substrate and tissue specificity. The expression of ACSL family members varies in different tissues and in its subcellular location. For example, ACSL6 has been reported to be mainly expressed in neural cells and the brain, and ACSL3 protein is predominant in brain and testis tissue. However, it is undetectable in the heart[5,6]. ACSL5 is localized in the outer mitochondrial membrane and microsomes[7].

ACSL1 is the predominant isoform in the liver. The activity of ACSL1 accounts for 50% of total hepatic ACSL activity[8]. ACSL1 over-expression increases the proportion of oleic acid in diacylglycerol (DAG) and phospholipids (PLs), but reduces the amount of oleic acid in cholesterol[9]. ACSL1 and ACSL5 are thought to play an important role in partitioning fatty acids toward triglyceride (TG) synthesis[10]. Deficiency of ACSL1 causes reduced synthesis of TG, but facilitates β-oxidation and the synthesis of PL species in hepatic cells[8]. Over-expression of ACSL1 results in the generation of large amounts of TG and its accumulation in hepatoma cells[11]. ACSL1 is able to activate membrane transport to effectively import free fatty acids into cells[12]. Compared with the normal control group, ACSL1 protein expression was observed to increase 2.468-5.418-fold 48 h after hepatocytes were treated with various concentrations of free long-chain fatty acids. In the presence of excessive free fatty acids, hepatocytes increase their uptake of free fatty acids and deposit them in the form of TG[13].

ACSL3 is mainly expressed during fetal development, and the level of ACSL3 in adult cerebrum is only 10% of its maximum on 15 d after birth[14]. ACSL3 is localized in the ER and cytosolic lipid droplets (LDs)[15]. LDs are the main organelles for the storage of neutral lipids, and contribute to the maintenance of lipid homeostasis. The physiological function of ACSL3 is to promote the synthesis of lecithin and the formation of LDs, which is not seen in other isoforms of ACSL[16]. Lecithin is the main PL on the surface of very low density lipoprotein (VLDL). Secretion of VLDL is suppressed in case of ACSL3 insufficiency. ACSL3 has an influence on the secretion of VLDL through the promotion of lecithin synthesis provided by the ACSL3-mediated synthesis of DAG[17]. The N-terminal region of ACSL3 is required for fatty acid uptake, due to its effect on enzymatic activity[18]. Experimental findings have shown that ACSL3 is able to regulate lipogenesis by facilitating the gene activity of several lipogenic transcription factors, including peroxisome proliferator-activated receptor-γ (PPAR-γ), carbohydrate-responsive element-binding protein (ChREB) and sterol regulatory element-binding protein-1c (SREBP-1c)[17,19,20].

ACSL4 is mainly expressed in adrenal glands and other steroid producing organs. ACSL4 expression is related to steroid hormones and growth factor receptors[21]. Silencing ACSL4 can inhibit the generation of hormone-related steroid[22]. ACSL4 has a substrate preference for arachidonic acid (AA). The catalytic activity of ACSL4 for AA is 5 to 6 times higher than that for linoleic acid[4]. ACSL4 expression decreases the conversion of free AA into leukotrienes while increasing the conversion of free AA into prostaglandins[21,23]. ACSL4 over-expression also significantly increases the synthesis of eicosanoid-CoA and promotes conversion of AA into phosphatidyl ethanolamine (PE), phosphatidyl inositol (PI) and TG[23,24].

It is well known that the absorption of dietary long chain fatty acids largely occurs in the jejunum and ACSL5 is mainly expressed in the small intestine. This suggests that ACSL5 plays a crucial role in the absorption of dietary long-chain fatty acids. Studies on ACSL5 have shown that it can catalyze the metabolism of exogenous, but not de novo synthesized fatty acids[7,25]. ACSL5-knockout mice did not show changes in the absorption of long-chain fatty acids or weight gain after a high-fat diet[26]. ACSL5 is also expressed in the liver and brown adipose tissue characterized by high levels of TG synthetase, and is involved in the synthesis of TG. ACSL5 over-expression promotes the synthesis of DAG and TG from fatty acids, which may be attributed to accelerated re-acylation by ACSL5. In contrast, ACSL5-knockout resulted in decreased synthesis of TG[11,27]. In addition, ACSL5 is also the only ACSL isoform localized in mitochondria. It is commonly believed to be related to β-oxidation. However, some data have indicated that ACSL5 over-expression does not have an impact on the β-oxidation of fatty acids[7].

EFFECTS OF ACSL ON CELL PROLIFERATION

EFFECTS OF ACSL ON CELL APOPTOSIS

ACSLs not only affect cell proliferation, but also play a role in cell apoptosis. Studies have shown that ACSL6 expression is elevated in animal models of non-alcoholic fatty liver disease (NAFLD), which may promote liver cell apoptosis[34]. In apoptotic intestinal cells, ACSL5 down-regulates cellular Fas associated death domain-like interleukin-1β converting enzyme inhibitory protein (cFLIP), which has been proven to be anti-apoptotic, and up-regulates tumor necrosis factor-related apoptosis inducing ligand receptor 1 (TRAIL-R1), which is the membrane receptor of the tumor necrosis factor/c-Jun N-terminal kinase (TNF/JNK) apoptosis pathway. A study has also shown that ACSL5 induces synthesis of ceramide, an important second messenger of the apoptosis pathway[35] (Figure 1). A study on an animal model of systemic lupus erythematosus showed that transcription of ACSL5 was significantly elevated in the disease model compared with normal controls and silencing ACSL5 with siRNA reduced apoptosis[36]. 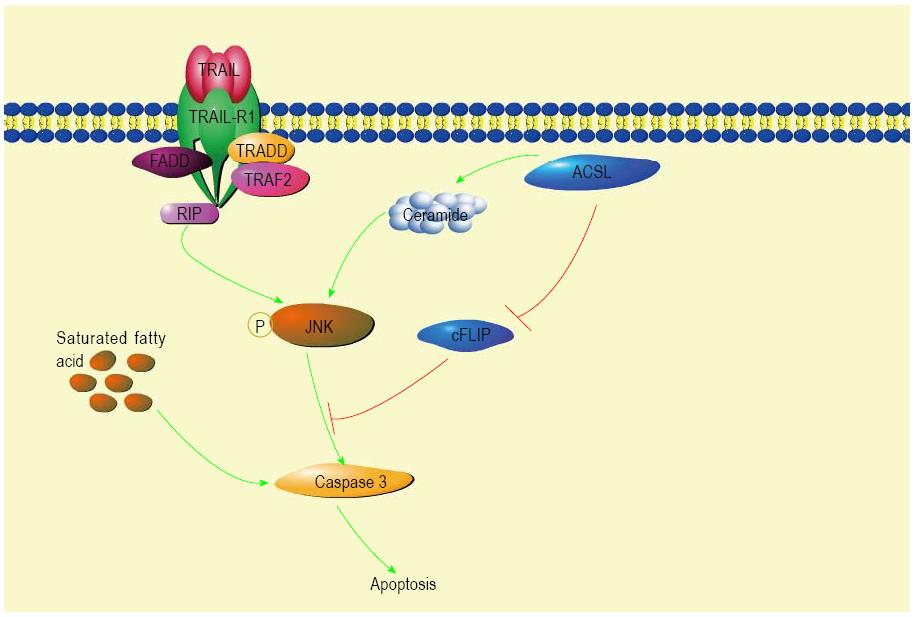 With the exception of ACSL6, all ACSL isoforms are expressed in the liver and the major subtype of ACSL in the liver is ACSL1, which is also a target gene of peroxisome proliferator-activated receptor-α (PPAR-α). PPAR-α is involved in fatty acid metabolism[38]. Deficient or repressed PPAR-α expression in the liver leads to decreased activity of ACSL1 and some other key enzymes involved in fatty acid metabolism, and consequently fat deposition and inflammation which promote liver fibrosis[39]. Another subtype of ACSL, ACSL3, plays an important role in the pathogenesis of fatty liver in addition to ACSL5[25,40]. Silencing ACSL3 inhibits the release of HCV particles from infected liver cells into plasma. HCV proliferation in liver cells can cause structural and functional changes or interfere with protein synthesis, and ultimately degeneration and necrosis of liver cells[17]. ACSL4 is upregulated in patients with NAFLD who have undergone bariatric surgery[41]. The regulation of ACSL4 may be through both the 3’-5’-cyclic adenosine monophosphate (cAMP) and p38 mitogen-activated protein kinase (MAPK) pathways in liver cancer[32] (Table 1).

Fatty acid metabolism disorder is involved in the occurrence of many metabolic diseases, such as obesity, diabetes, cardiovascular disease and atherosclerosis. ACSLs play an important role in fatty acid metabolism, and dysfunction of these enzymes often leads to fatty acid metabolism disorders. The rs9997745 mutant of ACSL1 increases the risk of metabolic syndrome, related to type 2 diabetes[45,46]. In addition, ACSL1 expression is increased in mononuclear cells in type 1 diabetic patients[47], suggesting that ACSL1 may be involved in the pathogenesis of diabetes.

Abnormal lipid metabolism can also cause neurological disease. ACSL6 predominates in nerve cells and ACSL6 insufficiency can lead to neuronal degeneration[48]. Studies have shown that ACSL6 over-expression leads to neurite outgrowth in rats, while silencing ACSL6 inhibits axon outgrowth of mouse neural cells[28,48]. ACSL6-induced activation of acetylcholinesterase may be involved in this process, as acetylcholinesterase promotes neural differentiation[49]. ACSL4 has been reported to be correlated with X-linked mental retardation, which leads to a higher incidence of mental disorders[50]. Recent studies have shown that, like ACSL6, ACSL4 showed specificity for polyunsaturated fatty acids, such as AA and eicosapentaenoic acid, which may contribute to changes in function of specific tissue[4,28].

ACSL AND OTHER DISEASES

Studies have shown that ACSLs also play a role in other diseases. Methylation of ACSL3 5’-CpG island (CGI) is thought to be correlated with maternal exposure to polycyclic aromatic hydrocarbons in the air, which is also closely correlated with the increased incidence of asthma, suggesting that ACSL3 may play a role in asthma[51,52]. Studies have shown that ACSL4 stimulates the release of prostaglandin E2 by arterial smooth muscle cells, which promotes atherosclerosis formation, suggesting the involvement of ACSL4 in atherosclerosis[23,53,54]. ACSL4 has also been linked to uterus abnormalities, Alport syndrome and elliptocytosis[55,56]. ACSL5 transcription is elevated in systemic lupus erythematosus (SLE), and the treatment of SLE with corticosteroids decreased ACSL5 transcription[36]. Patients with inflammatory bowel disease showed over-expression of ACSL1 and ACSL5 mRNAs in the terminal ileum and colon[57].

Long-chain Acyl-CoA synthetase plays a crucial role in fatty acid metabolism. Fatty acids, saturated or unsaturated, are a major source of energy in humans and are essential, particularly unsaturated fatty acids. Fatty acids need to be activated to form acyl-CoA before they enter a metabolic pathway, including both anabolic and catabolic pathways. Recent research on ACSLs mainly focused on the effect on fatty acid metabolism and less on the influence on cell proliferation and apoptosis. The mechanisms involved in fatty acid metabolism and cell proliferation and apoptosis are unclear. Further studies to elucidate the function of ACSL enzymes would be highly beneficial.