Pancreatic cancer is one of the most aggressive and lethal malignancies. The mortality rate of pancreatic cancer is extremely high, with a 25% one-year survival rate, and < 5% five-year survival[1]. According to the 2012 China Annual Report of Cancer Registration, pancreatic cancer incidence was ranked seventh in China, and mortality ranked sixth[2]. Early detection is difficult, thus 80% of patients have locally advanced or distant metastases when diagnosed[3]. Consequently, these patients need chemotherapy, radiotherapy, or palliative surgery to prolong their survival, control symptoms and improve their quality of life.

Gemcitabine has been the standard treatment for patients with locally advanced or metastatic pancreatic cancer since 1997. Although it improves survival compared with fluorouracil[4], it provides only marginal survival benefits. Recent evidence implicates the epidermal growth factor receptor (EGFR) signaling pathway in the development, progression, and metastasis of pancreatic cancer[5-7], and blockade of EGFR suppresses tumor proliferation[8]. Icotinib is a recently developed oral EGFR tyrosine kinase inhibitor that suppresses tumor growth and improves survival of Chinese patients with non-small-cell lung cancer[9]. However, there are no reports concerning its use for treatment of pancreatic cancer. We present the case of a patient diagnosed with metastatic pancreatic cancer who was treated with icotinib and gemcitabine.

A 64-year-old Asian male patient was admitted to our hospital in January 2014 complaining of epigastric pain that radiated toward the back, which had been present for one month. The pain was accompanied by abdominal distension, but without nausea, vomiting, or jaundice. The Karnofsky Performance Status score was 90, and the pain score-assessed with a numerical rating scale-was a 3. Laboratory examinations revealed normal liver, biliary, and pancreatic enzymes, and a normal complete blood count. The markers for hepatitis A, B, and C were negative. Screening for tumor markers showed elevated levels of carcinoembryonic antigen (CEA) (33.9 ng/mL), carbohydrate antigen (CA) 19-9 (> 12000.0 U/mL), and CA 242 (> 500.0 U/mL). Magnetic resonance imaging revealed a 3.6 cm × 3.4 cm mass in the head of the pancreas (Figure 1A) and multiple nodules in the liver (Figure 2A), which were also observed by positron emission tomography-computerized tomography (Figure 3). An ultrasound-guided percutaneous needle biopsy of the pancreatic mass was performed, and pathology indicated that it was an adenocarcinoma (Figure 4). The patient was diagnosed with stage IV pancreatic cancer with liver metastasis.

Figure 1 Contrast-enhanced magnetic resonance imaging of the pancreas. A: Before treatment, a mass was observed (arrow) in the head of pancreas; B: Marked shrinkage of the mass was seen after two treatment cycles; C: Mass size remained stable after four treatment cycles. 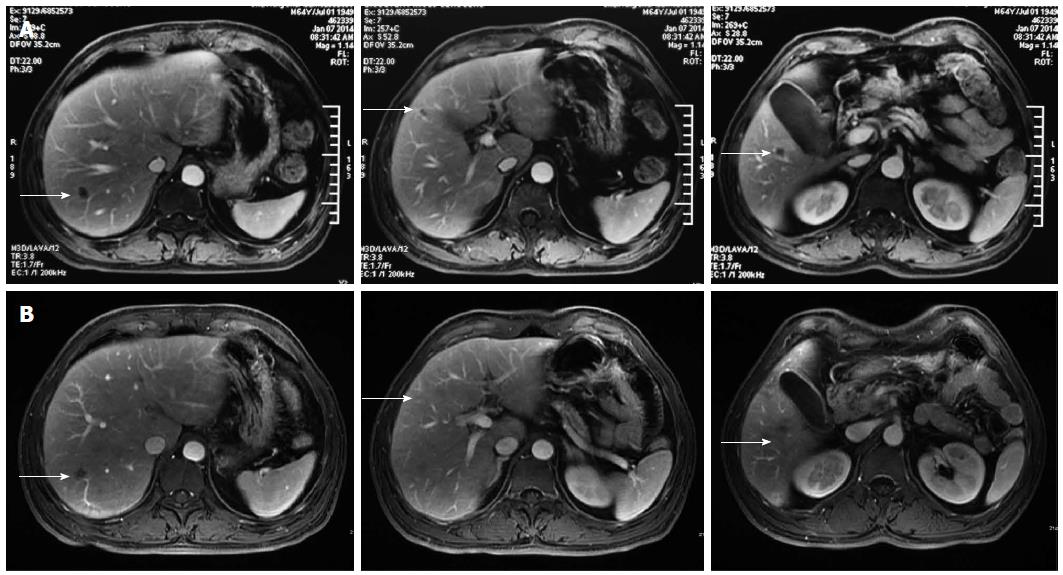 Figure 2 Contrast-enhanced magnetic resonance imaging of the liver. A: Before treatment, multiple metastatic nodules (arrows) were observed in the liver at three different levels; B: Marked shrinkage of the nodules was seen after two treatment cycles. 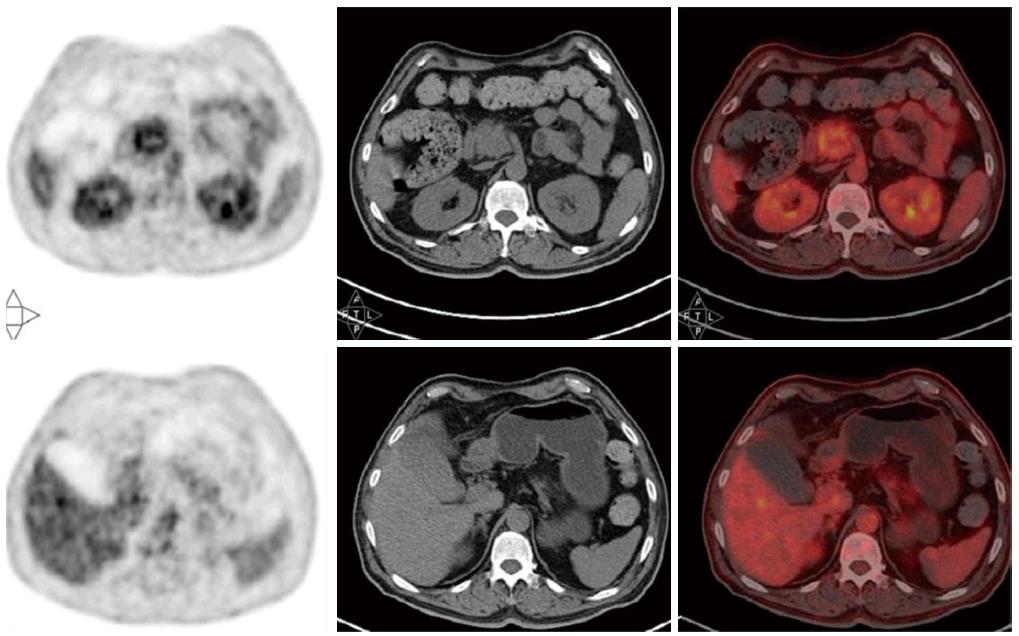 Figure 3 Positron emission tomography-computerized tomography. Masses in the pancreas and liver were observed before treatment. 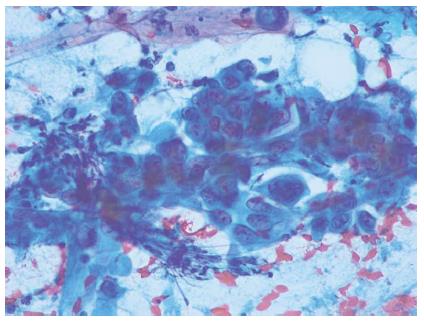 Figure 4 Cytological examination of the pancreatic mass. Hematoxylin and eosin staining indicated the mass was an adenocarcinoma (magnification × 200).

Because the mass was unresectable, the patient was given palliative therapy with 125 mg tid icotinib (Conmana; Betta Pharmaceuticals Co. Ltd., Zhejiang, China), combined with 1000 mg/m2 gemcitabine on days 1, 8, and 15 every four weeks. The patient complained of abdominal pain (score 3), which was treated with a non-steroidal anti-inflammatory (celecoxib). The patient developed a grade 1 acne-like rash and grade 2 myelosuppression in response to the chemotherapy, which was well tolerated and recovered quickly with supportive care.

After two cycles of therapy, serum tumor markers were decreased: CEA 4.9 ng/mL; CA 19-9, 2369.9 U/mL; CA 242, 329.1 U/mL. Because the pain decreased to a score of 0-1, the celecoxib was eliminated from the treatment regimen. Magnetic resonance imaging revealed marked shrinkage of the masses in the pancreas and liver (Figure 1B, 2B), with partial remission according to the Response Evaluation Criteria In Solid Tumors 1.1 criteria[10].

On day 8 of the third cycle, the patient suffered a grade 3 liver injury. A liver panel screen showed alanine transaminase at 400 U/L and aspartate transaminase at 210 U/L. The patient did not complain of nausea, vomiting, anorexia, or fatigue, however the chemotherapy regimen was suspended. Hepatic protective therapy was initiated, and chemotherapy was resumed once the liver enzymes decreased to within the normal range.

After four treatment cycles, the patient developed jaundice. The liver panel showed elevated biliary enzymes and serum bilirubin, and serum CA 19-9 was again elevated (> 12000.0 U/mL). A repeat abdominal computed tomography scan revealed no change in the pancreatic mass (Figure 1C) with significant enlargement of the intrahepatic biliary duct. Treatment was terminated because of the obstructive jaundice, which resolved with endoscopic retrograde biliary drainage. The patient refused further chemotherapy. He remains under supportive care in lieu of further treatment.

Survival of patients with pancreatic cancer can be improved by combining standard treatment with novel therapies. Combining gemcitabine with nab-paclitaxel or treatments containing folinic acid, fluorouracil, irinotecan, and oxaliplatin (FOLFIRINOX), improves the progression-free and median overall survivals, and overall response rate[11-13]. However, these regimens have many limitations. For example, Conroy et al[11] showed increased toxicity with FOLFIRINOX, including grade 3/4 neutropenia, febrile neutropenia, and diarrhea. Similarly, Von Hoff et al[12] found that grade 3/4 neutropenia and leukopenia occurred more frequently in patients receiving gemcitabine combined with nab-paclitaxel. In addition, these treatments are expensive and are not covered by medical insurance in China. Therefore, an effective, economical, and safe regimen for the treatment of advanced pancreatic cancer is urgently needed.

Inhibition of EGFR by monoclonal antibodies, which competitively inhibit ligand binding, and tyrosine kinase inhibitors has provided an additional strategy for cancer treatment[14]. A phase II trial showed that nimotuzumab with gemcitabine improved the progression-free and overall survivals of advanced pancreatic cancer patients, though one-third of patients experienced grade 3 adverse events[13]. The therapeutic value of cetuximab remains unclear[15]. EGFR tyrosine kinase inhibitors, such as erlotinib, gefitinib, and icotinib, may provide a more economical alternative. A Canadian phase III trial indicates that supplementing treatment with erlotinib significantly improved the progression-free, overall, and one-year survivals of pancreatic cancer patients compared with gemcitabine alone[16]. Treatment with erlotinib was well tolerated in these patients, with only a slight increase in the incidence of grade 3/4 rash and diarrhea, and no difference in the quality of life score. Erlotinib has since been approved for treatment of locally advanced and metastatic pancreatic cancer by the Food and Drug Administration and the European Union.

Icotinib is a highly specific and selective EGFR tyrosine kinase inhibitor. It is a small quinazoline compound with a chemical backbone structure similar to erlotinib, with a shorter halftime[17]. Icotinib has been shown to regulate the transcription and expression of a gene associated with cell proliferation and differentiation, and showing antiproliferative and antiangiogenic effects[18,19]. As icotinib was approved by the State Food and Drug Administration of China for the treatment of non-small-cell lung cancer in 2011, it is covered by medical insurance in Zhejiang province and represents an affordable treatment option for many patients. Icotinib has been evaluated for the treatment of solid tumors[20], and a phase III clinical trial demonstrated effects equivalent to gefitinib in patients with non-small-cell lung cancer, with a better safety profile and lower cost[9]. The adverse effects reported included rash, diarrhea, nausea, and abdominal distention.

The patient in the case presented here agreed to combination treatment with icotinib after refusing erlotinib and nimotuzumab because of the high cost, and FOLFIRINOX because of the adverse effects. The treatment effectively relieved the abdominal pain, reduced the size of the pancreatic mass after two treatment cycles and achieved partial remission, with markedly reduced serum CA 19-9, CEA, and CA 242 levels. The progression-free survival was 3.73 mo, similar to the gemcitabine and erlotinib regimen and better than gemcitabine alone[16]. The patient experienced low-grade adverse events, and recovered rapidly from the liver injury experienced during the third treatment cycle. To our knowledge, this is the first reported case of icotinib with gemcitabine for the treatment of advanced pancreatic cancer, and demonstrates that this regimen is a promising alternative treatment option.

In conclusion, the combination of icotinib with gemcitabine may be a viable option for the treatment of metastatic pancreatic cancer, with acceptable adverse effects and cost. However, large prospective studies should be carried out to further clarify the efficiency, safety, and overall survival benefit.

A 64-year-old Asian male patient with epigastric pain radiating toward the back that had been present for one month.

Contrast-enhanced magnetic resonance and positron emission tomography-computerized tomography showed a mass in the head of pancreas (3.6 cm × 3.4 cm) and multiple nodules in the liver.

This is the first case for the treatment of advanced pancreatic cancer with icotinib combined with gemcitabine.

Combination therapy comprised of icotinib and gemcitabine is an alternative choice for treatment of metastatic pancreatic cancer with tolerated adverse effects and acceptable cost.

An interesting case study of response to a newer combination therapy in patients with advanced metastatic cancer. The authors would have done well documenting the PET/CT response after therapy. The case is nicely documented, except that the manuscript looks to be corrected for grammar and spellings.