The risk of developing hepatocellular carcinoma (HCC) is strongly associated with hepatitis B virus infection. Hepatic angiomyolipoma (AML), a rare benign tumor, is composed of a heterogeneous mixture of adipose cells, smooth muscle cells and blood vessels. Here, we report the case of a 44-year-old man who developed HCC with a concomitant hepatic AML and a cavernous hemangioma, in the absence of cirrhosis. To our knowledge, based on an extensive literature search using the www.pubmed.gov website, this is the first report of an HCC case with both concomitant AML and cavernous hemangioma at the same position in the liver. The presence of the hepatitis B surface antigen was detected, but the liver function was normal. Clinical and pathological data were collected before and during the treatment. Hepatic AML was diagnosed based on the typical histological characteristics and immunohistochemical staining, which revealed, a positive staining with a melanocytic cell-specific monoclonal antibody. There was no evidence of tuberous sclerosis complex in this patient. Although the HCC was poor- to moderately-differentiated, the characteristics of the AML and the cavernous hemangioma in this patient did not match any criteria for malignancy. Hepatectomy followed by transarterial chemoembolization treatment were effective therapeutic methods for the adjacent lesions in this patient. This case is an interesting coincidence.

Hepatocellular carcinoma (HCC), the most common malignancy of the liver[1], ranks as the 5th most common cancer and the 3rd most common cause of cancer-related mortality worldwide. HCC may occur as a consequence of every pathologic condition inducing chronic liver damage. Indeed, cirrhosis is largely recognized to be a nodal step in hepatocarcinogenesis. The risk of developing HCC is strongly increased when hepatitis B virus (HBV) is involved[2].

Angiomyolipoma (AML), a rare benign tumor, is composed of a heterogeneous mixture of adipose cells, smooth muscle cells and blood vessels. AML occurs most commonly in the kidneys. The liver represents the second most frequent site of AML development[3,4]. Spontaneous hemorrhage or malignant transformation can occur during the progression of AML[5-7]. Because the radiological features of AML depend on the relative proportion of adipose cells in the tumor, AML is not easy to distinguish from HCC[8,9], especially when the tumor is small. The relationship between HBV infection and the occurrence of hepatic AML is still unclear.

We recently encountered a patient with hepatitis B surface antigen (HBsAg) expression who also presented with simultaneous HCC, hepatic AML and cavernous hemangioma in liver. To our knowledge, no case of HCC with concomitant hepatic AML and cavernous hemangioma has been reported to date in the scientific literature. Here, we present the histological features of the tumors from this patient and discuss the diagnosis and its practical significance.

In December 2012, a 44-year-old Chinese man was admitted to the hospital for intrahepatic nodules. The nodules were found incidentally on an abdominal computerized tomography (CT) scan performed as part of a general health examination. Laboratory analyses showed normal liver function, and the test for HBsAg expression was positive (+288.6 COI). The viral load was 1.16 × 103 IU/mL, and the alanine aminotransferase (ALT) level was 45 IU/L (normal value is 9-50 IU/L). The serum concentration of alpha-fetoprotein (AFP) was 4.1 μg/mL (normal value is < 20 μg/mL). The results of the routine urine test and the renal function were normal.

Abdominal ultrasonography (US) revealed a well-defined hypoechoic mass, measuring 8.8 cm × 7.8 cm, located in the right hepatic lobe (Figure 1A). Color Doppler sonography showed a filiform vascular distribution pattern (Figure 1B). Also in the right hepatic lobe, enhanced CT showed a hepatic mass measuring 9.6 cm × 8.0 cm and presenting an early-phase hypoattenuation and late-phase hypoattenuation. The morphological aspects of the liver tumor mass observed on the CT scan and on the US were typical of HCC. However, there is no pathognomonic clinical sign for tuberous sclerosis. After informed consent was obtained, the patient requested surgical treatment. Resection of partial right hepatic lobe containing the tumors was performed.

Upon macroscopic examination, the tumor was displayed an elastic consistency and presented a diameter of 9.0 cm. The cut surface of the tumor was grayish-white and grayish-green. The tumor was encapsulated and clearly demarcated from the normal hepatic parenchyma. Scarring and broad fibrous septa were observed (Figure 2A). There was no sign of fibrosis in the liver tissue surrounding the tumor. Underneath and adjacent to the tumor capsule, we identified a small yellowish soft area measuring 1.0 cm in diameter. There was a white nodule in the middle of the yellowish area with a diameter of 0.3 cm (Figure 2B).

Figure 2 Macroscopical features of the tumors in this case. A: The 10% neutral buffered formalin-fixed tumor occupied a large area of the right lobe. The encapsulated tumor was grayish-white and grayish-green. Scarring and broad fibrous septa was observed; B: Underneath the tumor capsule, an adjacent small yellowish soft area measuring 1.0 cm in diameter was observed, along with a small white nodule in it.

The 9.0 cm tumor was histopathologically diagnosed as HCC, with a poor- to moderate-differentiation level (Figure 3A). A vascular tumor embolus was identified outside of the HCC mass (Figure 3B). The yellowish area was mainly composed of smooth muscle cells, adipose cells and blood vessels. Therefore, the three defining characteristics of AML were present. Nuclear pleomorphism was absent, and mitotic figures were rarely observed. The white nodule measuring 0.3 cm and located in the middle of the AML tumor was also an HCC nodule. This small nodule, which presented similar components as the 9.0 cm HCC tumor, may represent a disseminated nodule originating from the bigger tumor mass (Figure 3C, D). Adjacent to the edge of the 9.0 cm HCC tumor, a small typical cavernous hemangioma lesion was found (Figure 3E). Via immunohistochemical stainings, the AML area was found negative for Desmin and CD34 expression, but positive for HMB45 (melanocytic cell-specific monoclonal antibody) and A103 (Melan-A) expression (Figure 4A-D). 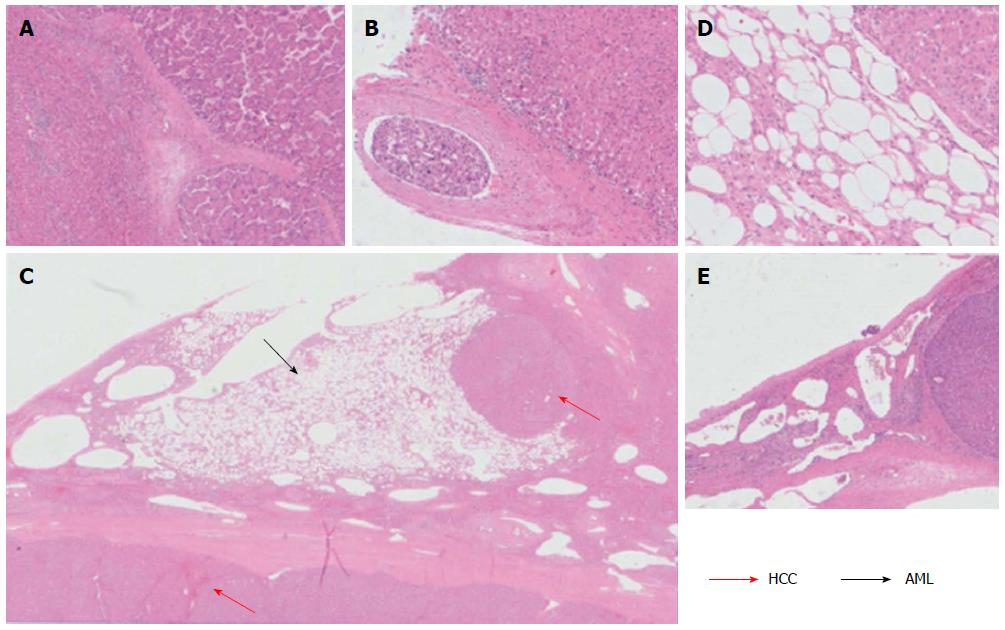 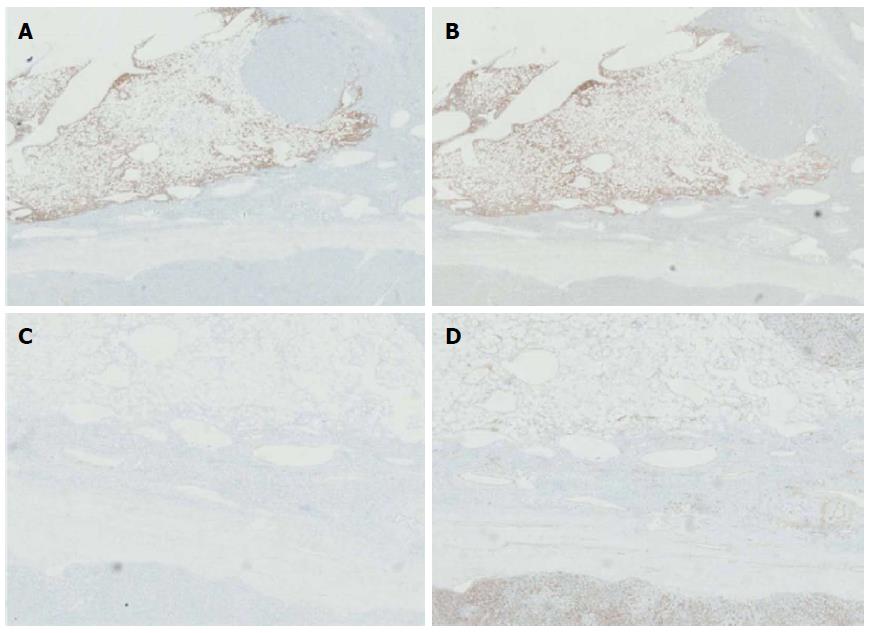 One month after the hepatectomy, the patient requested a transarterial chemoembolization (TACE) treatment. Although the tumors were completely removed by local resection of right hepatic lobe, there were vascular tumor embolus identified outside of the HCC mass, which was a potential recurrence factor. A dose of 750 mg of FuDR was used in the TACE treatment in order to prevent recurrence of the HCC. A dosage of 100 mg QD of Lamivudine was administered as antiviral Therapy. The post-TACE course was uneventful, and so far, there has been no evidence of postoperative recurrence or metastasis.

AML is considered as being included in the perivascular epithelioid cell tumor (PEComa) family, which was described by Bonetti et al[12] in 1992. PEComas are defined as mesenchymal tumors composed of histologically and immunohistochemically distinctive perivascular epithelioid cells. These tumors are consistently immunoreactive to HMB45 and A103 monoclonal antibodies, which are used as markers for melanoma. In diagnostic radiology, the imaging features of AML vary due to the differences in the proportion of adipose cells, smooth muscle cells and blood vessels. Therefore, sometimes it is difficult to differentiate hepatic AML from HCC in radiological diagnosis[13,14]. In our case, the marginal 1.0 cm AML was too small to be differentiated from the 9.0 cm HCC mass using both the US and CT scan methods. MRI is considered to be the best modality to determine the components of AML[15]. Hyper- or hypointensity on the T1-weighted image and hyperintensity on the T2-weighted image are observed depending on the component of tumor tissue[16,17]. Contrast-enhanced US (CEUS) was reported as an effective diagnostic tool for AML[17,18]. Li et al[18] reported that CEUS showed an inhomogeneous hyperenhancing pattern in the arterial phase and prolonged enhancement during the portal and Kupffer phases of AML. However, MRI and CEUS were not performed on this patient. Occasionally, the AML is part of a systemic disease called tuberous sclerosis complex (TSC). TSC is an autosomal dominant disorder involving multiple organs[19,20].In the setting of TSC, hepatic AML is often accompanied by bilateral renal AML. However, in this case, we found no evidence of TSC.

The origin of hepatic AML remains unclear, although recent studies have shown that AML originates from perivascular epithelioid cells. These cells can multidirectionally differentiate into vascular smooth muscle and epithelial cells, and are characterized by the expression of differentiation-associated markers of melanoma cell[6]. However, the origin of cavernous hemangioma is totally different. Hepatic AML most often occurs in females, although this patient was a male with HBV infection. Until now, there is no direct evidence revealing the relation between HBV and AML. Likewise, the correlation between HBV and cavernous hemangioma is also unclear. In HCC, in addition to the long-lasting hepatitis produced by a chronic infection, the HBV may exert a direct oncogenic role through several different mechanisms, including viral DNA integration into the host genome and production of proteins with pro-oncogenic properties[1,2]. HBV DNA integration occurs randomly in the context of the human genome and may involve multiple sites located on different chromosomes[2,23,24]. In cases similar to this one, the HBV may promote liver cell transformation and cancer progression even independently of cirrhosis development[1,2]. In the present case, it is difficult to tell if the origin of the AML and the cavernous hemangioma was induced by HBV DNA integration. Nevertheless, the characteristics of AML and the cavernous hemangioma observed in this case did not match any of the criteria for malignancy, such as necrosis, infiltrative growth patterns, large size, and high mitotic index.

Most cases of hepatic AML and cavernous hemangioma have a good prognosis regardless of the management strategy[25], but hepatocellular carcinoma should be removed surgically. We report the extremely rare case of an HCC tumor accompanied with a concomitant hepatic AML and a hepatic cavernous hemangioma occurring in adjacent positions. Nevertheless, in this case, which may be a pure coincidence, the patient benefited from surgical resection.

Intrahepatic nodules were found incidentally on an abdominal computerized tomography (CT) scan performed as part of a general health examination.

The 9.0 cm tumor was histopathologically diagnosed as HCC and adjacent AML and cavernous hemangioma were found located at the same position in the liver. A small HCC nodule located in the middle of the AML tumor. The AML area was found negative for Desmin and CD34 expression but positive for HMB45 and A103 expression.

Resection of the right hepatic lobe containing the tumors was performed and one month after the hepatectomy, a transarterial chemoembolization (TACE) treatment was performed.

AML is considered as being included in the perivascular epithelioid cell tumor family, which is composed of a heterogeneous mixture of adipose cells, smooth muscle cells and blood vessels.

This case report presents the clinical characteristics of HCC with a concomitant hepatic AML and a cavernous hemangioma in the absence of cirrhosis. Hepatectomy followed by TACE treatment were effective therapeutic methods for the adjacent lesions in this patient.

Well written case report given information about a rare tumour combination that could be only a mere coincidence, but it could be worth it to be published to draw the attention for future research to disclose the cause of this association in case more cases are described.