Type 1 autoimmune pancreatitis (AIP) or chronic sclerosing sialadenitis (Küttner’s tumour) is an uncommon disorder that has recently been confirmed as an IgG4-related disease. Here, we describe a rare case of a 53-year-old male patient who primarily presented with pancreatic body mass, left neck mass and several lumps in his lower lip mimicking pancreatic cancer (PC) and neck metastasis. The patient underwent pancreatic body mass and labial gland lumps resection as well as an ultrasound-guided biopsy of the left neck mass. He was diagnosed with IgG4-related focal type of AIP (f-AIP) and Küttner’s tumour by immunohistochemistry. The patient responded well to corticosteroid therapy and remains healthy with no signs of recurrence at one year follow-up. The differentiation of f-AIP from PC is very important to avoid unnecessary pancreatic resection.

Core tip: We report a rare case of 53-year-old male patient who suffered from IgG4-related focal type of autoimmune pancreatitis (f-AIP) accompanied with Küttner’s tumour originally suspected of being pancreatic cancer with neck metastasis. The patient responded well to corticosteroid therapy but he had undergone an unnecessary pancreatic body mass resection one year ago prior to admission. Therefore, we suggest that AIP should always be considered in case of a focal pancreatic mass.

Autoimmune pancreatitis (AIP) is an uncommon form of chronic pancreatitis associated with an autoimmune inflammatory process[1]. Two subtypes of AIP have been so far recognized: type 1 AIP is the pancreatic manifestation of IgG4-related disease (IgG4-RD), while type 2 AIP is related to a granulocytic epithelial lesion[2,3]. Although diffuse swelling of the pancreatic parenchyma and diffuse irregular narrowing of the pancreatic duct system are morphologically characteristics of both subtypes of AIP, a focal type of AIP (f-AIP) has been recently recognized[4]. The f-AIP exhibits a localized mass lesion in the pancreas, which closely mimics pancreatic cancer (PC)[4,5]. Since AIP responds extremely well to steroid therapy, the differentiation of AIP from PC is highly important to avoid unnecessary laparotomy or pancreatic resection.

Chronic sclerosing sialadenitis (Küttner’s tumour) is a benign tumour-like lesion most commonly affecting the submandibular gland first recognized by Küttner in 1896[6]. Histologically it is characterized by acinar atrophy, periductal sclerosis, and perilobular lymphocytic infiltrate. Recently, Küttner’s tumour has been recognized within the spectrum of IgG4-RD because some samples of sclerosing sialadenitis from Japan or America have abundant IgG4-positive plasma cells[7]. Although unusual cases that affect the parotid glands or labial glands have also been described[8], Küttner’s tumour arising in the unilateral submandibular gland and synchronously affecting the focal salivary gland in lower lip has not been reported.

Here, we report a rare case of a patient with IgG4-related f-AIP accompanied with Küttner’s tumour manifesting itself as a mass in the neck and several lumps in the lower lip, which was originally misdiagnosed of being PC with neck metastasis.

A 53-year-old male from Northeast China was admitted for abdominal distension and diarrhea lasting for four years. He presented a painless, hard left neck mass with slight dysfunction of salivary secretion and a 20-pound weight loss over 6 mo. One year prior to admission, positron emission tomography/computed tomography (PET/CT) (data not shown) or CT imaging identified a possible pancreatic body carcinoma resulting in surgical resection of the pancreatic body and tail with en-bloc splenectomy at that time. However, the diagnosis of pancreatic carcinoma was ruled out after a routine histological examination was performed (Figure 1A). The patient denied any history of alcohol, tobacco, or illicit drug use. On examination, several firm 0.3 cm non-tender lumps were seen in the mucosa of his lower lip. He also had a painless, hard, fixed mass in the left submandibular area (suspected cervical metastasis). Abdominal examination revealed mild epigastric tenderness to deep palpation without rebound. 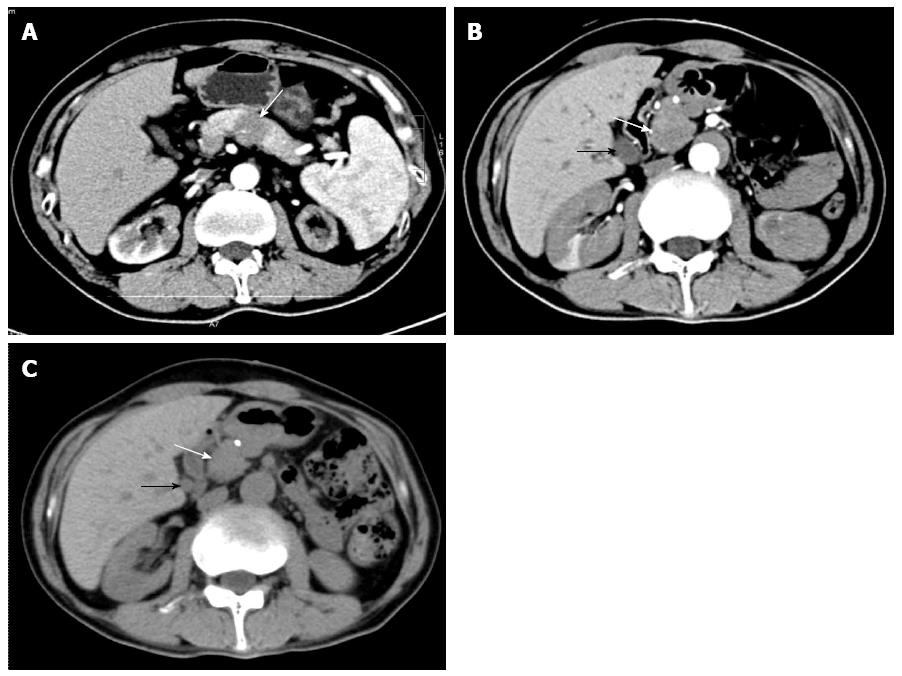 On the 10th day after admission, we suspected neck metastasis of pancreatic head cancer or multiple tumors of the salivary glands or IgG4-related systemic disease. The patient underwent an excisional biopsy examination of the lower lip lumps to obtain definitive histological diagnosis. In distinction from healthy individuals, hematoxylin and eosin (HE) staining of the excisional biopsy specimen revealed acinar atrophy, abundant lymphocytoplasma cell infiltration, and marked fibrosis (Figure 2A, B). Immunohistochemical staining showed abundant IgG4-postive plasma cells in the excisional labial gland specimen of the patient, with a ratio of IgG4/IgG-positive plasma cells of more than 50% (Figure 2C, D). Fine needle aspiration biopsy (FNA) of the left submandibular gland showed changes consistent with labial gland spencimen (data not shown). The patient was diagnosed with Küttner’s tumour which affected left submandibular gland and labial salivary gland. 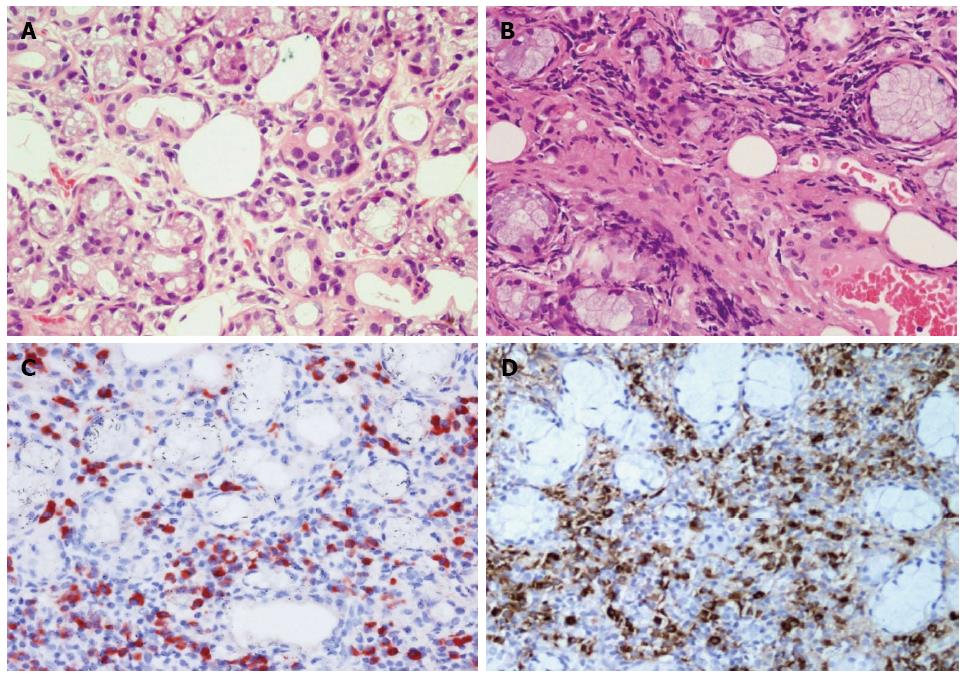 Figure 2 Histological findings of the excisional biopsy specimen of the lower lip lumps. Hematoxylin and eosin (HE) stain showing normal labial gland (A, × 400); acinar atrophy and lymphoplasmacyte infiltration and fibrosis from the patient (B, × 400); immunohistochemical staining for IgG4 (red color) (C, × 400) or IgG (yellow color) (D, × 400) in plasma cells from the patient.

To determine weather the patient suffered from IgG4-related autoimmune pancreatitis, pancreatic specimens that had been obtained from the patient by excision of the body mass of the pancreas one year prior to this admission were stained with HE which revealed the presence of phlebitis (Figure 3A), storiform-type fibrosis and dense lymphoplasmacyte infiltration (Figure 3A, B). Immunohistochemical staining showed numerous IgG4-positive plasmacytic infiltrations around the intact pancreatic ducts, with a ratio of IgG4/IgG-positive plasmacytes of more than 40% thus meeting the diagnostic criteria for IgG4-related f-AIP (Figure 3C, D). 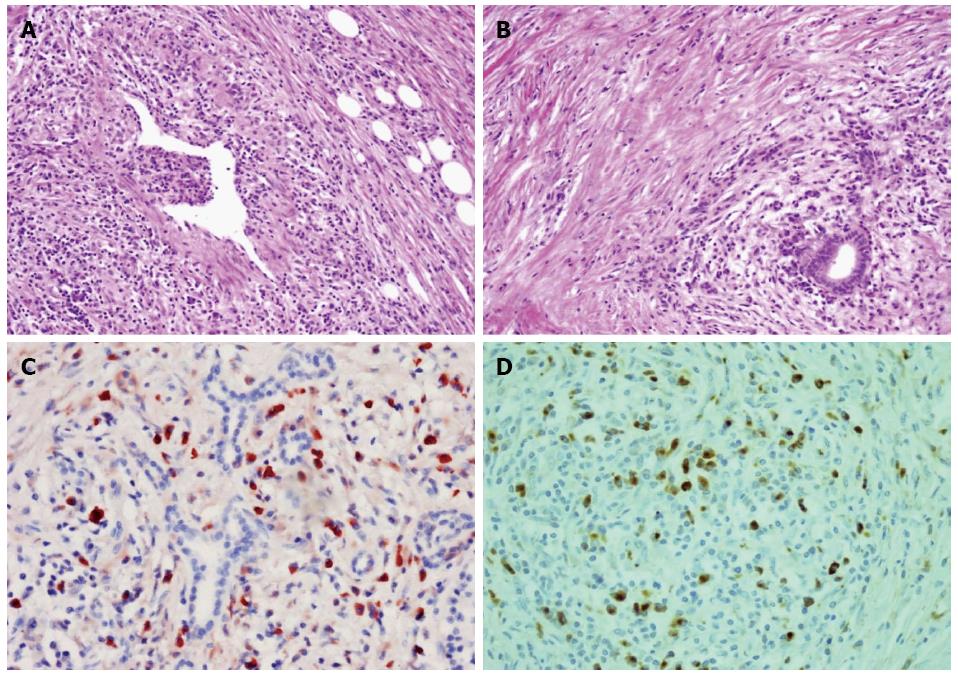 On the 17th day after admission, the patient received 30 mg/d of prednisone for 4 d without any side effects, and was then discharged with the same steroid dose for up to 4 wk. At his 4-wk follow-up, the patient exhibited no signs of either abdominal distension or diarrhea. His previously swollen submandibular gland on the left side was markedly reduced but still palpable, while the epigastric region was not painful upon deep palpation. A CT scan of the abdomen showed slight reduction of the pancreatic head volume or in the extra- and intra-hepatic bile duct dilatations (Figure 1C). The previously elevated serum levels of amylase and lipase had returned to normal value ranges, but serum IgG4 level was still high (15.6 g/L). The patient then received a long-term maintenance dose of 10 mg/d of prednisone after steroid tapering. At 12-mo follow-up, his illness had not recurred.

IgG4-RD is a recently recognized multi-organ fibro-inflammatory condition with a propensity to manifest itself as a mass-forming lesion characterized by the presence of abundant IgG4+ plasma cells, elevation of serum IgG4 levels, and a dramatic steroid responsiveness[9]. New histological diagnostic criteria for IgG4-RD require the presence of at least two of three characteristic histological features, namely, dense lymphoplasmacytic infiltration, fibrosis arranged at least focally in a storiform pattern, and obliterative phlebitis[10]. Thus, the patient in this study fully met the diagnostic criteria for IgG4-related f-AIP and Küttner’s tumour.

Although diagnosis of AIP has greatly improved because of growing awareness of the condition and proposed diagnostic criteria[3,10], there still remain no good practical strategies to distinguish AIP from PC. Clinicians must differentiate between the two disorders to prevent unnecessary surgery or delayed initiation of corticosteroid therapy. It has been reported that about 2.5% of pancreatic resections were performed in AIP patients following a mistaken diagnosis of PC[11] and that 35.3% of f-AIP patients were surgically treated because PC was suspected[12]. The patient in this study underwent surgical resection of the pancreatic body mass one year prior to admission, which we subsequently histologically confirmed as IgG4-related f-AIP.

Over the last decade, clinicians have paid great attention to the differentiation of AIP from PC. Recently Sun et al[13] reported that five radiological imaging features helpful for diagnosing f-AIP were (1) sausage-shaped enlargement; (2) delayed homogeneous enhancement; (3) hypoattenuating capsule-like rim; (4) irregular narrowing of the main pancreatic duct (MPD) and/or stricture of the common bile duct; and (5) MPD upstream dilatation ≤ 5 mm. Since focal mass and pancreatic duct dilatation are the most common findings for PC as well[14], differentiating such cases of f-AIP from PC is rather difficult using CT or magnetic resonance imaging alone. A recent study showed that serum IgG4 > 280 mg/dL or other organ involvement (exapancreatic biliary stricture, salivary gland swelling and retroperitoneal fibrosis) were highly specific findings for f-AIP[15]. More recently, 18F-fluorodeoxyglucose (FDG)-PET/CT could be used to monitor the drug efficacy of IgG4-RD because abnormal FDG uptake in all affected lesions had completely disappeared after therapy[16]. Although endoscopic ultrasound-guided FNA (EUS-FNA) is useful to either diagnose or rule out PC, definitive diagnosis of AIP is difficult by EUS-FNA because of the small sample size obtained[11]. Recently, EUS-guided core biopsy techniques are recommended[11]. IgG4 immunostaining of biopsy specimens obtained from the major duodenal papilla was also used for diagnosis of AIP[17]. Therefore, comprehensive data including clinical, imaging, serological, histological differences and other organ involvement should be analyzed to differentiate f-AIP from PC.

The patient in this study responded well to corticosteroid therapy. However, after 4-wk steroid therapy the serum IgG4 level was still high (15.6 g/L). Since IgG4 antibodies are directly pathogenic in IgG4-RD, rituximab therapy is chosen to realize rapid decline of serum IgG4 levels and prompt clinical improvement in IgG4-RD by depleting the pool B lymphocytes that replenish short-lived IgG4-secreting plasma cells[18]. Additionally, steroid sparing regimens such as Azathioprine and mycophenolate mofetil may be used in patients with incomplete response to steroid.

In summary, we report a rare case of IgG4-related f-AIP and Küttner’s tumour which primarily mimics pancreatic cancer and neck metastasis. Since the differentiation of f-AIP from PC is very difficult and their treatment and prognosis are quite different, we suggest that AIP should always be considered in case of a focal pancreatic mass.

The patient was diagnosed with IgG4-related focal type of autoimmune pancreatitis (f-AIP) and Küttner’s tumour.

The differential diagnosis included PC with neck metastasis and other malignant tumors in the neck region.

The patient was diagnosed with IgG4-related f-AIP and Küttner’s tumour on the basis of numerous IgG4-positive plasma cells in excisional pancreatic mass sample and labial gland specimen, and also had a high serum IgG4 level.

Computed tomography (CT) showed a same image with PC in the body of the pancreas one year ago prior to admission and a similar image of pancreatic head carcinoma at admission. An ultrasound scan of the neck showed left swollen submandibular gland.

The patient underwent pancreatic body mass and labial gland lumps resection. He was diagnosed with IgG4-related f-AIP and Küttner’s tumour by immunohistochemistry.

Chronic sclerosing sialadenitis, also known as Küttner’s tumour is a benign tumor lesion most commonly affecting the submandibular gland first recognized by Küttner in 1896. Recently, Küttner’s tumour has been recognized within the spectrum of IgG4-related disease because some samples of sclerosing sialadenitis from Japan or America have abundant IgG4-positive plasma cells.

This case reports IgG4-related f-AIP accompanied with Küttner’s tumour which primarily mimics PC and neck metastasis. Since the differention of f-AIP from PC is quite difficult, the authors suggest that AIP should always be considered in case of a focal pancreatic mass.

This is an important case from the awareness point of view, and also of the prognosis being far more positive than that of pancreatic cancer with metastasis. The manuscript is interesting and well written.