Oxidative stress is considered to be an important regulator of the pathogenesis of acute pancreatitis. Reactive oxygen species (ROS) regulate the activation of inflammatory cascades, the recruitment of inflammatory cells and tissue damage in acute pancreatitis. A hallmark of the inflammatory response in pancreatitis is the induction of cytokine expression, which is regulated by a number of signaling molecules including oxidant-sensitive transcription factors such as nuclear factor-κB (NF-κB) and activator protein-1 (AP-1), signal transducer and activator of transcription 3 (STAT3), and mitogen-activated protein kinases (MAPKs). Cross-talk between ROS and pro-inflammatory cytokines is mediated by NF-κB, AP-1, STAT3, and MAPKs; this crosstalk amplifies the inflammatory cascade in acute pancreatitis. Therapeutic studies have shown that antioxidants and natural compounds can have beneficial effects for patients with pancreatitis and can also influence the expression of proinflammatory cytokines in cerulein-induced pancreatitis. Since oxidative stress may activate inflammatory signaling pathways and contribute to the development of pancreatitis, antioxidant therapy may alleviate the symptoms or prevent the development of pancreatitis. Since chronic administration of high doses of antioxidants may have deleterious effects, dosage levels and duration of antioxidant treatment should be carefully determined.

EFFECTS OF ANTIOXIDANTS AND NATURAL COMPOUNDS IN ACUTE PANCREATITIS

An antioxidant mixture was shown to reduce the level of malondialdehyde, and increase the activities of catalase and glutathione peroxidase in L-arginine-induced pancreatitis rats. Moreover, supplementation with an antioxidant mixture containing NAC, selenium, and vitamin C was shown to reduce pancreatic injury in rats[36]. Furthermore, treatment with NAC alone was sufficient to attenuate sodium taurocholate-induced pancreatitis in rats[37]. A combination treatment of ebselen [2-phenyl-1,2-benzisoselenazol-3(2H)-one], which is a mimic of GSH peroxidase, and ethylhydroxyethyl cellulose (EHEC) was also shown to attenuate severe acute pancreatitis in rats[38]. Resveratrol, a plant-derived polyphenolic phytoalexin, has also be shown to reduce the expression of TNF-α and IL-8 by inhibiting NF-κB signaling in acute pancreatitis[39]. In the early stage of acute pancreatitis, NF-κB is activated in macrophages, which then produce cytokines. During acute pancreatitis, treatment with resveratrol reduces the expression of IL-1β and TNF-α in macrophages via NF-κB signaling pathways[40]. In cerulein-induced acute pancreatitis, treatment with resveratrol has been shown to prevent tissue damage, reduce the expression of IL-1β, and induce the expression of IL-10, an anti-inflammatory cytokine[41]. The effect of resveratrol may be due to its antioxidant effect with induction of catalase and MnSOD[42]. Moreover, cerulein-induced upregulation of IL-1β and TNF-α and depletion of GSH are rescued by treatment with lycopene, a natural carotenoid[43]. Glycyrrhizin treatment of acute pancreatitis has also been shown to suppress the production of proinflammatory cytokines (IL-6, IL-1β and TNF-α) and to stimulate recovery from histological changes such as acinar cell necrosis, hemorrhage, and edema[44]. Glycyrrhizin treatment has been shown to not only decrease the serum levels of MCP-1 and MIP-2 in cerulein-induced acute pancreatitis, but also to reduce the number of infiltrated granulocytes and monocytes in pancreatic tissues[45]. Glycyrrhizin exerted antioxidant effects and reduced activation of NF-κB, c-Jun N-terminal kinase (JNK), and p38, redox-sensitive signaling events known to be relevant for influenza A virus replication[46]. Glycyrrhizin treatment decreased the incidence of free radical-induced lipid peroxidation and improved immunity activities in the blood and nasal mucosa of allergic rhinitis mice[47]. In addition, bioflavonoid curcumin, the pigment in turmeric (Curcuma longa), inhibited the activation of NF-κB and the expression of TNF-α and thus ameliorated cerulein pancreatitis in mice[48].

Antioxidant therapy is believed to have great potential, since its therapeutic efficacy has already been demonstrated in experimental acute pancreatitis. Patients admitted within 72 h of onset of pain were randomized to receive either placebo or antioxidants (vitamin C 500 mg, NAC 200 mg 8 hourly and antoxyl forte 1 capsule hourly with standard medical treatment) daily[49]. Treatment with vitamin C and NAC was shown to decrease oxidative stress and to improve the antioxidant status of 23 patients with acute pancreatitis[49]. Moreover, antioxidant therapy with selenium and D-α-tocopherol in 99 patients showed beneficial effects against necrotizing or mild acute pancreatitis[50]. A combination therapy of daily doses of antioxidants including 600 μg organic selenium, 9000 IU β-carotene, 0.54 g vitamin C, 270 IU vitamin E, and 2 g methionine was studied in three controlled clinical trials[51-53]. After treatment with a combination of antioxidants to 28 patients with idiopathic chronic, alcoholic chronic, or idiopathic acute pancreatitis, recurrent attacks and pancreatic pain were significantly attenuated[51]. Another study with 36 chronic pancreatitis patients, pain was reduced after the combination therapy and quality of life, physical, social functioning and health perception were enhanced[52]. In clinical trial with 147 patients, the antioxidants were administered for 6 mo, and pain and hospitalization were reduced[53]. Twenty patients with chronic pancreatitis received 500 mg curcumin with 5 mg of piperine or placebo for 6 wk[54]. Treatment of curcumin reduced erythrocyte malondialdehyde levels compared to placebo[54]. Bolus intravenous administration of vitamin C (10 g/d) for 5 d has been shown to alleviate pancreatitis symptoms, enhance the cure rate, reduce the complications, and decrease the length of hospital stays in 84 patients with acute pancreatitis[55].

In contrast, a multidrug approach was investigated in a randomized control trial using intravenous NAC, selenium and vitamin C in 43 patients with severe acute pancreatitis for 7 d. While makers for oxidative stress were lower in the treatment group, there was no significant difference in patient outcomes[56]. The study shows a lack of benefit from antioxidant therapy in severe acute pancreatitis. In another randomized study with multiple antioxidants, 39 patients with severe acute pancreatitis were randomized to standard treatment or standard treatment and vitamin C (1000 mg in 100 mL normal saline), vitamin E (200 mg oral), and vitamin A (10000 IU intramuscularly) for 14 d. No significant difference was demonstrated in the two treatment groups regarding, length of hospital stay and organ dysfunction[57]. Also, antioxidants therapy does not seem to confer protection in patients with post endoscopic retrograde cholangiopancreatography (ERCP)-induced pancreatitis. In a double-blinded trial, patients were given a single dose (2 g) of β-carotene 12 hours prior to an ERCP. There was no difference in the incidence of acute pancreatitis between the patients who received antioxidant (9.4%) with those who had received placebo and developed (10%)[58]. Even though there has been no report for adverse effect directly attributable to antioxidant therapy, we could not exclude possible deleterious effects of chronic administration of high doses of antioxidants. Therefore, dosage levels and duration of antioxidant treatment should be carefully determined. The role of oxidative stress on inflammatory signaling and anti-inflammatory effects of natural compounds in cerulein-induced pancreatitis are summarized in Figure 1. 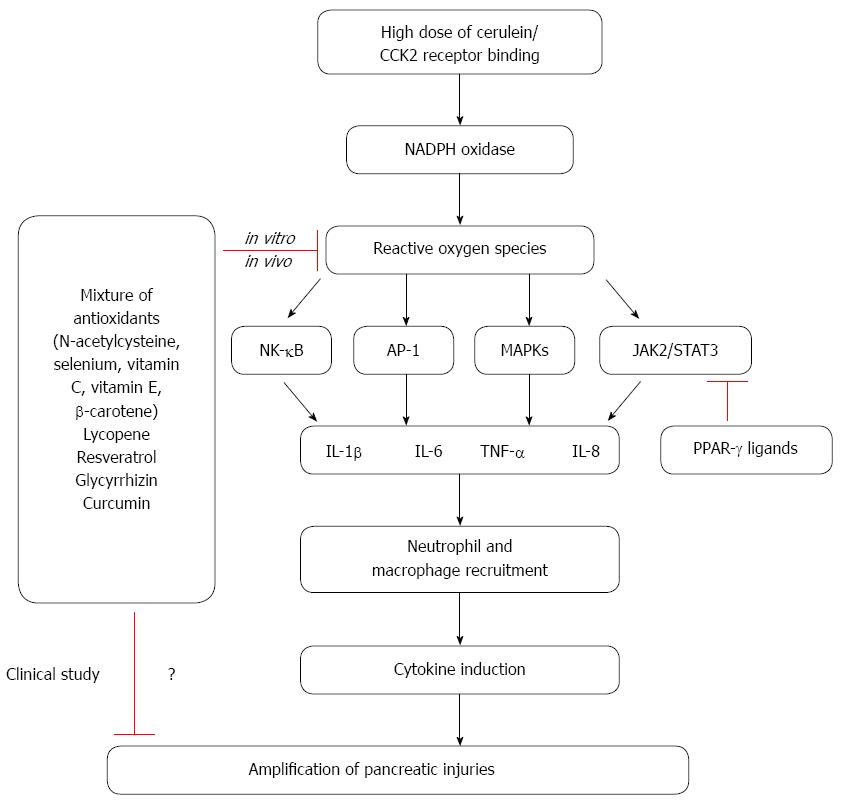 Figure 1 Scheme of oxidative stress-induced inflammation in cerulein pancreatitis. High dose of cerulein, a cholecystokinin (CCK) analogue, binds to CCK2 receptor and stimulates the activation of NAPH oxidase to produce reactive oxygen species. Reactive oxygen species activate redox-sensitive transcription factors nuclear factor-κB (NF-κB) and activator protein-1 (AP-1) as well as inflammatory mediators mitogen-activated protein kinases (MAPKs) (mitogen-activated protein kinases) and janus kinase 2 (JAK2)/signal transducer and activator of transcription 3 (STAT3), which in turn induces the expression of cytokines IL-1β, IL-6, IL-8, and TNF-α in pancreas. Induction of cytokines recruits neutrophils and macrophages in the injured pancreatic tissues. Cytokines/chemokines act as a positive feedback loop to up-regulates their own expression. Therefore, cytokines positively regulate the induction of cytokines and pancreatic injuries are amplified. Peroxisome proliferator activated receptor-γ (PPAR-γ) ligands inhibit the activation of JAK2/STAT3 and suppresses inflammatory signaling in pancreas. Antioxidant nutrients and natural compounds reduce the levels of reactive oxygen species and suppress activation of NF-κB, AP-1, MAPKs, and JAK2/STAT3 to inhibit induction of cytokines and pancreatic injuries in experimental pancreatitis (in vitro, in vivo). Some clinical studies show a lack of benefit from antioxidant therapy while others have beneficial effects against acute and chronic pancreatitis by alleviating symptoms and enhancing the cure rate.
CONCLUSION

Oxidative stress is well established to increase throughout the course of pancreatitis. Furthermore, ROS are known to mediate the activation of NF-κB, AP-1, MAPKs, and STAT3 in pancreatic acinar cells stimulated with cerulein. Crosstalk between ROS and pro-inflammatory cytokines, which is mediated by NF-κB, STAT3, and MAPKs, is believed to contribute to the inflammatory process in pancreas. Antioxidant combinations of NAC, organic selenium, β-carotene, vitamin C, and vitamin E may inhibit cytokine expression and thus reduce the severity of pancreatitis. Natural compounds with antioxidant effects, such as lycopene, resveratrol, and glycyrrhizin, also reduce the expression of inflammatory cytokines (TNF-α, IL-6, and IL-8) by suppressing NF-κB signaling in acute pancreatitis. Cumulatively, these studies demonstrate that oxidative stress plays an important role in the activation of inflammatory signaling pathways and in the pathogenesis of pancreatitis. Therefore, reducing the levels of ROS by antioxidant therapy may be clinically valuable for the treatment and/or prevention of pancreatitis. However, dosage levels and duration of antioxidant treatment should be carefully determined to prevent possible side effects to the patients with acute and chronic pancreatitis.