METHODS: We retrospectively reviewed H. pylori-infected patients who were treated with a standard triple regimen (PPI, amoxicillin 1 g, and clarithromycin 500 mg, all twice daily for 7 d). The diagnosis of H. pylori infection and its eradication was assessed with the rapid urease test, histological examination by silver staining, or the 13C-urea breath test. We divided the patients into two groups: one received the standard eradication regimen without PPI pretreatment (Group A), and the other received PPI pretreatment (Group B). The patients in Group B were reclassified into three groups based on the duration of PPI pretreatment: Group B-I (3-14 d), Group B-II (15-55 d), and Group B-III (≥ 56 d).

CONCLUSION: PPI pretreatment did not affect H. pylori eradication rate, regardless of the medication period.

Several guidelines recommend standard triple therapy consisting of two antimicrobial agents, such as amoxicillin with clarithromycin or metronidazole, and a proton pump inhibitor (PPI) as the first choice treatment for Helicobacter pylori (H. pylori) infection[1-3]. The addition of a PPI to an antibiotic-containing regimen is known to boost the H. pylori eradication rate[4]. By increasing the intragastric pH, PPIs lower minimal inhibitory concentration (MIC) values and improve the chemical stability of antibacterial agents[5-7].

At present, endoscopic resection has been extensively applied to treat gastric neoplasms as a curative modality. This procedure inevitably results in a large iatrogenic ulcer, which subsequently poses the risk of gastric bleeding or perforation. To prevent these complications, PPIs are generally administered for > 4 wk[14,15]. However, recently there have been concerns raised about the possible adverse effects of long-term PPI treatment, including nutritional deficiencies, cardiovascular risk with PPI/clopidogrel co-prescriptions, and bone fractures[16,17]. Long-term PPI therapy should be used only in robust indications, and careful assessment of the risks and benefits is required.

We retrospectively reviewed H. pylori-infected patients who were treated with a standard triple regimen from September 2009 to December 2011. The regimen consisted of PPI (lansoprazole 30 mg, esomeprazole 40 mg, or rabeprazole 20 mg), amoxicillin 1 g, and clarithromycin 500 mg, all twice daily for 7 d. Patients who completed the treatment and the assessment of eradication were enrolled in the study. Consumption of > 90% of the prescribed drugs was defined as good compliance and was accepted as the completion of treatment. The enrolled patients underwent upper gastrointestinal endoscopy before eradication treatment. The exclusion criteria were previous eradication therapy (n = 11), use of H2 receptor antagonists or antibiotics within the past 4 wk (n = 58), being < 18 years (n = 3), and having an unknown history of recent medication (n = 35).

H. pylori infection was diagnosed according to one of the following tests: (1) rapid urease test (CLO test; Ballard Medical Products, Draper, UT, United States) by gastric mucosal biopsy from the body at the gastric angularis and greater curvature of the antrum; (2) histological examination by Warthin-Starry silver staining; and (3) 13C-urea breath test (Helifinder; Medichems, Seoul, South Korea). The assessment of eradication was performed at least 4 wk after the completion of 1 wk of the standard regimen. The 13C-urea breath test was generally used for the assessment of eradication, and rapid urease tests and histological examination were only used if repeat endoscopy was clinically indicated for other reasons.

After excluding 107 individuals from a total of 1197 patients enrolled in this study, we finally analyzed 1090 patients including 138 with iatrogenic ulcers caused by the endoscopic resection of gastric neoplasms. The retrospective assessment flow is presented in Figure 1. The mean age of the study group was 51.5 ± 12.8 years and 63.7% were male. The overall eradication rate was 80.2%. 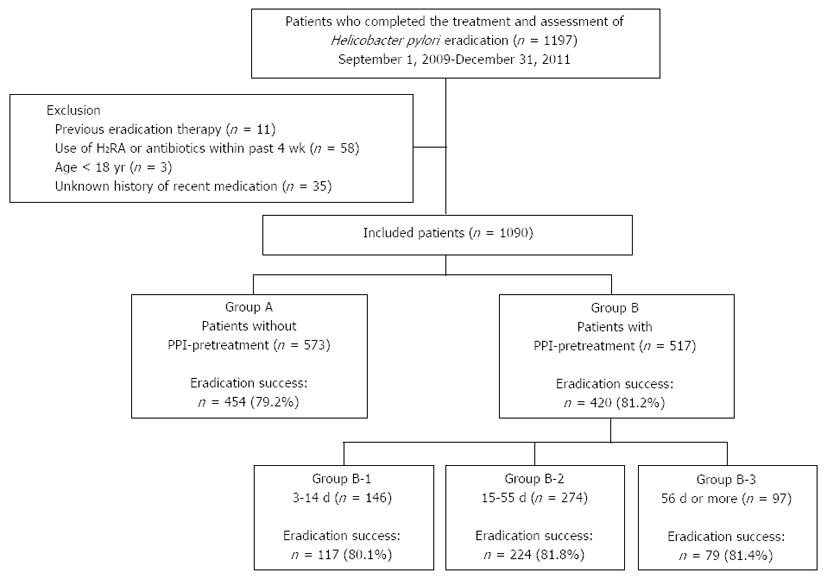 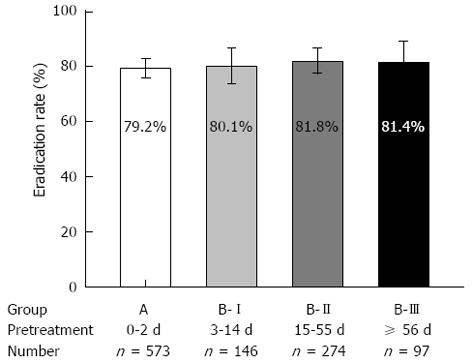 Generally, 80% and 85% cure rates based on intention-to-treat and per-protocol analysis, respectively, are regarded as the thresholds for acceptable results of H. pylori eradication[23]. In Korea, the eradication rates with 1 wk standard triple therapy have been reported to be similar[24]. In this regard, it is important to have a thorough knowledge of the factors that affect eradication rate, and we supposed that PPI pretreatment might be one of the possible factors. However, the present study showed that PPI pretreatment did not affect the eradication rate. Generally, patients with gastric neoplasms have lower gastric acid secretory function as compared with those with peptic ulcers, particularly duodenal ulcers. This possibly contributed to the similarity of the eradication rates between the study groups. Our findings were not different from the results of a previous meta-analysis[8].

Meanwhile, previous studies have mostly focused on the effect of the short-term use of PPIs. Therefore, the influence of long-term PPI pretreatment has not yet been elucidated. The effects of long-term PPI use are significant especially in the field of endoscopic resection therapy because the patients who receive this treatment need both the long-term use of PPIs and H. pylori eradication therapy. Although many studies have supported H. pylori eradication because of its prophylactic effect on the development of metachronous gastric cancer, these authors did not consider the effect of PPI pretreatment and the appropriate period for eradication therapy[18-20]. In the present study, we demonstrated that the eradication rates in long-term pretreatment groups were not different from those in the non-pretreatment and short-term pretreatment groups. This finding was observed in a recent study which showed that pretreatment with lansoprazole for 6-8 wk did not influence the eradication rate in peptic ulcer patients[25].

It seems that contrary to the negative effect of PPI treatment before the dual eradication regimen consisting of amoxicillin and PPI[9-11], PPI pretreatment does not affect the eradication rate in the clarithromycin-added triple regimen. Clarithromycin is known to be the most effective single agent against H. pylori[26], and has additive antibacterial activity when used with amoxicillin or PPIs[27]. By adding this powerful antibacterial agent to the regimen, the eradication rate does not seem to be affected by PPI pretreatment.

As a retrospective analysis, this study had several limitations. In particular, the enrolled patients received different types of PPI in the pretreatment and H. pylori eradication regimens, and underwent different methods for assessing the eradication. These inconsistencies for various factors were a weak point in our study. We tried to overcome these limitations by the enrollment of a large number of patients and by performing multivariate analysis. Additionally, any potential adverse effects of the PPIs were not investigated in our study. PPIs, however, were not prescribed for more than 6 mo in any patient (the longest, 168 d); and the adverse effects of long-term PPI treatment might be rare. Prospective and controlled studies are needed to confirm the present findings and complement the limitations of the study.

Guidelines recommend that the 13C-urease breath test should be used for confirmation of eradication except in cases where repeat endoscopy is indicated[1,3]. In our study, the rapid urease test and histological examination were performed only in limited cases needing repeated endoscopy (14.4%). Although these tests have > 90% sensitivity and specificity in predicting H. pylori status after antibiotic treatment[37], the 13C-urease breath test should be considered for confirming eradication.

We acknowledge the financial support of the Catholic Medical Center Research Foundation in the program year of 2013.

The study aimed to answer the clinical question as to whether PPI pretreatment influences H. pylori eradication; especially when treatment was > 1 mo. This study had a large cohort size.