In the present study we report on changes in irritable bowel syndrome-severity scoring system (IBS-SSS) and irritable bowel syndrome-quality of life (IBS-QoL) in 19 IBS patients, aged 18 to 74 years (F/M: 14/5), during 12 wk registering their symptoms on the web-application (www.ibs.constant-care.dk). During a control period of the first 6-wk patients were asked to register their IBS-SSS and IBS-QoL on the web-application weekly without receiving any intervention. Thereafter, low fermentable oligo-, di-, mono-saccharides and polyols (FODMAP) diet (LFD) was introduced for the next 6 wk while continuing the registration. Though a small sample size a significant improvement in disease activity (IBS-SSS) was observed during both the control period, median: 278 (range: 122-377), P = 0.02, and subsequently during the LFD period, median: 151 (range: 29-334), P < 0.01. The IBS-QoL solely changed significantly during the LFD period, median: 67 (37-120), P < 0.01. The significant reduction in disease activity during the control period shows a positive effect of the web-application on IBS symptoms when presented as a “traffic light”. However adding the diet reduced IBS-SSS to < 150, inactive to mild symptoms. In the future results from larger scale trials are awaited.

Core tip: The treatment of irritable bowel syndrome (IBS) symptoms provides a challenge for clinicians in everyday practice. In our case report we present the changes in disease activity and quality of life of 19 IBS patients using web-application as a tool for self-management over 6-wk and then applying the low Fermentable Oligo-, Di-, Mono- saccharides and Polyols diet while continuing the registration of their symptoms over a second 6-wk period.

Irritable bowel syndrome (IBS) is a chronic functional gastrointestinal disorder of partly known etiology. The condition is characterized by relapsing symptoms of abdominal pain and discomfort associated with bloating, distension and altered bowel habit (ranging from diarrhoea to constipation) but without any pathological abnormality of the gut wall[1]. The low FODMAP (Fermentable Oligo-, Di-, Mono- saccharides and Polyols) diet (LFD) provides a new therapeutic approach for patients with IBS[2-4]. FODMAPs are short-chain, poorly absorbed and readily fermented carbohydrates[5]. Their ingestion induces luminal distension and gastrointestinal symptoms by gas production (H2, CH4) in and water delivery to the colon[6]. The efficacy of the LFD in decreasing gastrointestinal symptoms in IBS was previously confirmed[7-9]. Web-based self-management programs have proven to be feasible approaches in chronic diseases, among others inflammatory bowel diseases (IBD), by influencing disease course and increasing self-adherence, compliance and quality of life (QoL)[10-15]. The web-app (web-application) and homepage http://www.ibs.constant-care.dk, ConstantMed Inc., was developed in order to investigate whether the same encouraging effect could be achieved for patients with IBS[16]. The application contains education about IBS symptoms and treatment options, IBS disease activity score and QoL scoring presented in a traffic light and e-learning. Further it carries a web-ward round system applicable for e.g. nurses or doctors, ranking patients in colours in accordance with IBS severity. We report on changes in irritable bowel syndrome-severity scoring system (IBS-SSS) and IBS-QoL of 19 IBS patients in a pilot study.

We hereby report on 19 IBS patients aged 18 to 74 years fulfilling the Rome III criteria of IBS. Eight patients were diagnosed with IBS-D (diarrhoea predominant subtype), 7 with IBS-A (alternating subtype) and 4 with IBS-C (constipation predominant subtype). The patients were selected consecutively in 2011-2012 from Herlev Hospital and Hamlet Hospital in Copenhagen[17]. Patient characteristics at baseline are shown in Table 1. IBS was differentiated from IBD by negative outcome of sigmoidoscopy/colonoscopy, normal histological specimens from the bowel, negative inflammatory markers (white blood cells, platelets, CRP, faecal calprotectin) and by no presence of blood in the stool. Negative bacterial culture results, negative transglutaminase antibodies and negative lactose intolerance gene test were required for the participation as well as no history of known food allergy. Negative bacterial culture results were required for the differentiation from infectious gastroenteritis. Patients having any alarm symptoms as fever (> 38.5 °C), anaemia, unintended weight loss > 5 kg, familiar disposition to colorectal cancer or any other significant diseases were excluded. During the first 6-wk, non-interventional control period, patients were asked to fill in the IBS-SSS (Irritable Bowel Syndrome-Severity Scoring System) and IBS-QoL (Irritable Bowel Syndrome-Quality of Life) questionnaires weekly in the web-app. At the end of the control period they were instructed by a FODMAP-certified dietician regarding the LFD during a 45-min consultation. The end of the control period was considered as the start of the LFD period, because the patients started the LFD between week 6 and 7. They were requested to follow strictly the LFD during the second 6-wk period and continue the registration of their IBS-SSS and IBS-QoL in the web-app. The patients and the study investigator could monitor the disease course by the changes in IBS-SSS and IBS-QoL in a traffic light system (a patient case is illustrated in Figure 1): red indicated severe IBS-SSS, yellow moderate IBS-SSS and green mild IBS-SSS and remission (= no symptoms). All statistical analyses were carried out using SPSS software Version 20.0 for Windows (SPSS Inc., Chicago, IL). Standard descriptive statistics were performed, including calculation of median and range for continuous variables. Differences between the IBS-SSS and IBS-QoL values between the start and the end of the control period, between the start and the end of the LFD period and between the start of the control period and the end of the LFD period were analysed by Wilcoxon two-related-samples test. A P value of < 0.05 was considered statistically significant. The power of the study was not performed as it was planned to be a case/pilot report. The study was approved by the Ethical Committee, Denmark (protocol number H-2-2011-095-IBS). All patients included in this study signed an informed consent. For measuring the IBS severity the IBS-SSS questionnaire was used[18]. Each of the five questions generates a maximum score of 100 using prompted visual analogue scales (VAS), leading to a total possible score of 500. Below 175 indicates mild or remission, 175 to 300 moderate and above 300 severe IBS-SSS. The IBS-QoL is a 34-item validated, 1-5 options, self-administered questionnaire for assessing the perceived quality of life for persons with IBS (range: 34-170, lower scores indicate better IBS-QoL)[19]. Each questionnaire was administered at least once a week during the study period. 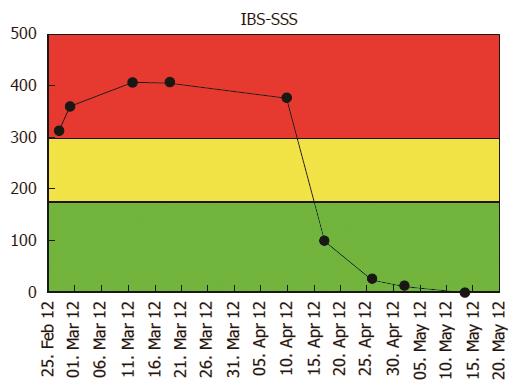 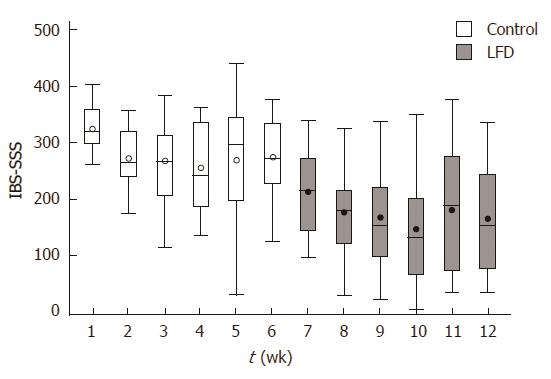 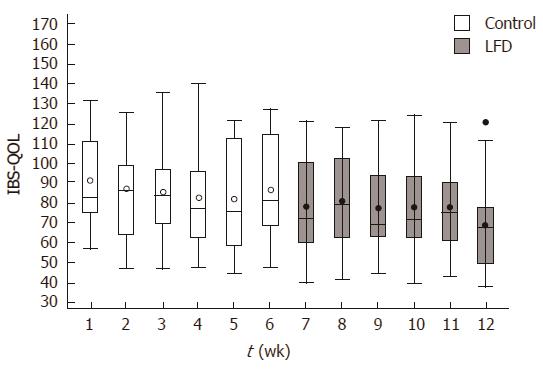 We demonstrate in 19 patients a difference in IBS-SSS observed during the control and the LFD period as well. However, stratifying between the three IBS subtypes, only a significant reduction in the diarrhoea predominant subtype was observed, but because of the small sample size final interpretation can only be carried out in a larger scale randomized trial. At the outset of the LFD period the IBS-SSS value improved from moderate to mild IBS severity. IBS-SSS scoring at the end of LFD showed that out of the 19 patients, 11 had obtained remission to mild IBS severity.

An interesting finding was the significant reduction of IBS-SSS during the control period, from severe to moderate IBS symptoms. The web-based program seems to be feasible and efficient for IBS patients. One of the explanations could be that with the help of the web-program patients recognize the disease pattern of their IBS, thus could manage their disease course also by themselves possibly by identifying the cause of their increase of their symptoms and subsequently eliminate the specific environmental components (diet, stress, polyols in candy etc.). Furthermore, the web-app tool might have a placebo effect in this patient group: the fact, that a physician follows the changes in patients’ IBS symptoms, this might also have a positive effect on their disease course. Similarly to previous studies, the efficacy of the LFD in decreasing IBS-SSS was confirmed also in our present case report[2-4]. The natural disease course of IBS should also be taken into account when evaluating our results, as it has a chronic course with intermittent flares. The strength of our study is that this is the first case report on the use of the web-application as a new initiative in the management of IBS patients applying LFD. The weakness of the manuscript is that the small simple size impedes interpretation of the significant results observed in the IBS diarrhea predominant subtype. Furthermore, the adherence to the LFD was not measured, however the patients had close contact to the dieticians and they could easily reach them via e-mail and telephone if they had any questions regarding the LFD.

In conclusion, the web-app and the LFD might be feasible concepts and help the IBS patients to control and lower their IBS symptom severity scoring. Larger randomized controlled trials are awaited.

Hereby the authors report on 19 patients fulfilling the Rome III criteria of irritable bowel syndrome (IBS) registering their symptoms on the web-application before and during the use of the low fermentable oligo-, di-, mono-saccharides and polyols (FODMAP) diet, which was especially developed for IBS patients.

IBS patients fulfilling the Rome III criteria were selected consecutively in 2011-2012 from Herlev Hospital and Hamlet Hospital in Copenhagen in the study. Cases were aligned to the three subtypes of IBS: IBS-D (diarrhoea predominant subtype), IBS-A (alternating subtype) or IBS-C (constipation predominant subtype).

IBS was differentiated from inflammatory bowel diseases by negative inflammatory markers (FC = faecal calprotectin) and by no presence of blood in the stool.

Negative outcome of sigmoidoscopy or colonoscopy was required before the inclusion in the study.

Normal hystological specimens from the bowel were required before the inclusion in the study.

The included patients applied normal western diet (ND) during first 6-wk and the late finish date during the second 6-wk period, which was developed especially for IBS patients.

The low FODMAP diet (Fermentable oligo-, di-, mono-saccharides and polyols) (LFD) is based on the reduced intake of the short chain carbohydrates and polyols and it proved to be an effective treatment option in IBS patients in previous studies. The IBS-SSS (Irritable Bowel Syndrome-Severity Scoring System) was used for measuring the disease severity in IBS patients. The IBS-QoL (Irritable Bowel Syndrome-Quality of Life) was applied for measuring the quality of life of IBS patients.

Both interventions, the web-application and the LFD had a positive effect on the disease severity of these patients.

The strength of their study is that this is the first case report on the use of the web-application as a new initiative in the management of IBS patients applying LFD. The weakness of the manuscript is that the small simple size impedes interpretation of the significant results observed in the IBS diarrhoea predominant subtype.