AIM: To clarify the associations between G-protein beta polypeptide 3 (GNB3) C825T polymorphism and risk of the irritable bowel syndrome (IBS) by a meta-analysis.

METHODS: We searched relevant studies in PubMed, EMBASE, CNKI, Google Scholar, Ovid and Cochrane library prior to October 2013. The strengths of the associations between GNB3 C825T polymorphism and IBS risk were estimated by odds ratios (ORs) with 95% confidence interval (CIs).

Core tip: G-protein beta polypeptide 3 (GNB3) polymorphisms have been identified as an independent risk factor causally associated with functional gastrointestinal disorder and receive extensive interest. However, their association with irritable bowel syndrome (IBS) remains controversial. In the present paper, the authors combined the data from seven case-control studies with 1085 IBS cases and 1695 controls, and found that there were associations between GNB3 C825T polymorphism and IBS risk in the overall population; subgroup analysis did not reveal significant associations either in Asian population or Caucasian population. In regard to the subtypes of IBS (constipation-dominant type, diarrhea-dominant type and mixed type), no associations were found either.

Irritable bowel syndrome (IBS) is a functional gastrointestinal disorder (FGID) of multifactorial origin. Population-based studies show that the prevalence and annual incidence of IBS range from 10%-20% and 1%-2%, respectively[1]. Several factors are associated with IBS, including abnormal gastrointestinal motor function, visceral hypersensitivity, psychological distress (including depression, anxiety, and abuse), immune dysregulation, dietary factors, and family history of IBS[2]. In addition, evidence indicating that IBS cases cluster in families[3] and that identical twins have a greater chance of developing IBS than dizygotic twins[4] suggests that genetic factors also contribute to the pathogenesis of IBS. Accordingly, the genes encoding several proteins, such as serotonin (5-hydroxytryptamine, 5-HT), interleukin (IL)-10, and tumor necrosis factor (TNF)-α, have been proven to be associated with the risk of IBS[5,6].

G-protein was also recently indicated to be another emerging candidate gene for the risk of IBS[5]. G-protein, which comprises an α, a β, and a γ subunit, integrates signals between receptors and effector proteins. The G-protein β polypeptide 3 (GNB3) gene is implicated in the pathogenesis of FGID[7,8] and IBS[6,9,10]. The C825T polymorphism is located in the GNB3 gene encoding the β3 subunit of heterotrimeric G-proteins[11,12]. Furthermore, the T allele of GNB3 C825T is associated with alternative splicing of the gene and the formation of a truncated but functionally active splice variant[13]. Although several studies have investigated the association between GNB3 C825T polymorphism and IBS risk, the results are inconsistent[5,10,14,15]. Such inconsistencies are generally due to ethnic differences or variations in sample size. Therefore, the present meta-analysis aimed to clarify the associations between GNB3 C825T polymorphism and IBS risk.

In order to find all studies investigating the associations between GNB3 polymorphism and IBS risk, we searched the Cochrane Clinical Trials Database, Medline, EMBASE and the Chinese National Knowledge Infrastructure, Google Scholar, the Ovid Library, and conference abstracts prior to October 2013 using the following search terms: “irritable bowel syndrome,”“G-protein beta3 subunit,” and “polymorphism.” The search was not limited by language or publication status. Potentially relevant articles were screened by at least 2 independent reviewers, and disagreements were resolved by discussion or input from a third reviewer if required.

The inclusion criteria were as follows: (1) a study examining the association between GNB3 polymorphism and IBS risk; (2) case-control design; and (3) sufficient information of genotype frequency. In cases of studies with the overlapping data, the most recent one was selected.

The exclusion criteria were as follows: (1) non-case-control design; and (2) genotype frequency or allele frequency not adequately reported/data unable to be obtained by contacting the authors.

Two investigators independently extracted data from the identified publications, including the first author’s name, year of publication, source of publication, IBS diagnostic criteria, genotyping method, numbers of cases and controls, genotype frequency, and allele frequency. Discrepancies in data extraction were resolved by repeating the study review and discussing the results.

Hardy-Weinberg equilibrium (HWE) was applied to the control population to evaluate the data quality, and HWE analysis was carried out using the χ2 test. The respective associations under the allele contrast, codominant, dominant, and recessive models were analyzed. The strengths of the associations between GNB3 polymorphism and IBS risk were estimated according to odds ratios (ORs) with 95% confidence intervals (CIs). The heterogeneity among studies was assessed in a meta-analysis using the Cochran Q test. The inconsistency index I2 was also calculated to quantify heterogeneity[16]. A fixed-effects model (P > 0.05) was used to pool the results if the result of the heterogeneity test was not significant; otherwise, a random-effects model was selected (P < 0.05). Sensitivity analysis was performed by excluding studies that deviated from HWE[17]. Subgroup analyses were carried out with respect to ethnicity and IBS subtype. Publication bias was examined by using the Begg’s test and Egger’s test. All statistical tests were 2-sided and the level of significance was set at P < 0.05. STATA version 11.2 (Stata Corporation, College Station, TX, United States) was used for all analyses.

Seven case-control studies[5,6,9,10,14,15,18] with a total of 1085 cases and 1695 controls were finally included in the present meta-analysis. Four of them[10,14,18] specifically investigated the associations between GNB3 C825T polymorphisms and 3 IBS subtypes including the constipation-dominant type (IBS-C), diarrhea-dominant type (IBS-D), and mixed (IBS-M). 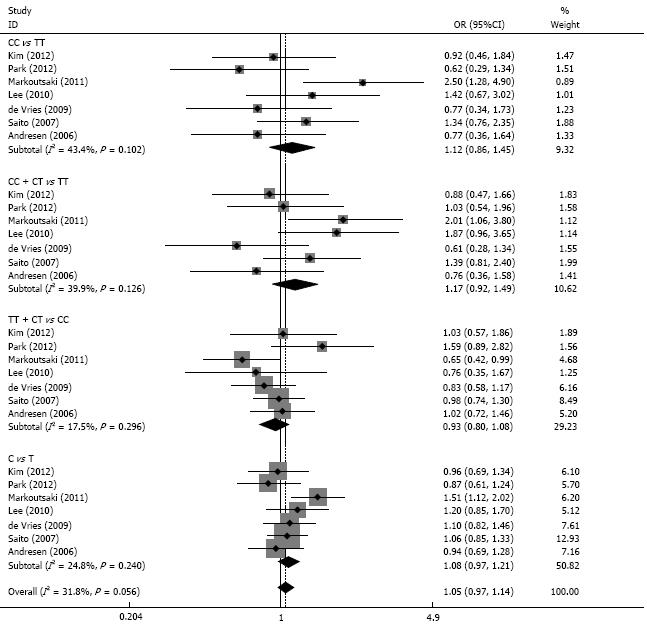 The studies were divided into subgroups according Caucasian and Asian ethnicity. However, there were no associations among the 4 models of GNB3 C825T polymorphism and IBS risk (all P > 0.05). Next, the 3 subtypes of IBS (i.e., IBS-C, IBS-D, and IBS-M) were analyzed from the data of 4 studies. However, there were no associations between GNB3 C825T polymorphism and the risk of IBS-C, IBS-D, or IBS-M (Figure 2).

G-protein regulates the functions of ion channels and protein kinases, and is essential for stimulus-response coupling in the intracellular system. It acts as the main mediator of signal transport into the cellular system[19]. The GNB3 gene encodes the β3 subunit of heterotrimeric G-proteins and can affect intracellular signal transduction and biological activity. The T allele of GNB3 C825T is associated with enhanced G-protein activation, and the CC genotype results in reduced G-protein translation[20]. In addition, patients with the CC genotype may have decreased immune response to infection and thus require a prolonged recovery period from any infection[11]; this may predispose such individuals to visceral hypersensitivity. The T allele is associated with depression[21], lymphocyte chemotaxis[22], and hypertension[23]. The C allele, which is predictive of diminished G-protein activation, is associated with functional dyspepsia[24]. Furthermore, reports from the USA indicate that meal-unrelated dyspepsia is associated with both the homozygous T and C genotypes[25]. Perturbed gut sensory and motor function, autonomic nervous system dysfunction, and psychiatric disturbances are common causes of IBS; all of these factors can alter intracellular signal transduction[26]. About 80% of all known membrane receptors linked to intracellular effector systems are coupled to G-proteins[27]. Accordingly, changes in G-proteins may lead to functional changes in intracellular signal transduction. Therefore, the GNB3 gene is likely involved in the generation of common pathophysiologic mechanisms of IBS. To date, several studies have investigated the association between GNB3 C825T polymorphism and IBS. However, current findings regarding these associations are controversial and therefore require further study.

To date, no genome-wide association study or comprehensive quantitative assessment has been conducted to determine the genetic association with IBS risk. The present study is the first meta-analysis to clarify the association between GNB3 C825T polymorphism and IBS risk. The large sample size of the present study enhances statistical power to detect more stable associations and provides more reliable estimates than any single previous study. Moreover, associations were assessed by testing 4 different genetic models to obtain more robust and accurate estimations. Furthermore, the low heterogeneity and publication bias demonstrate the precision and robustness of the present results.

Despite its strengths, this study has some limitations that should be mentioned. First, although the present meta-analysis contained a large sample, there were few studies in the subgroup analysis with respect to ethnicity and IBS subtype. Second, the diagnostic criteria for IBS are not uniform; the studies in the meta-analysis employed either the Rome II or III criteria, which inevitably caused selection bias. Third, all Asian subjects were Korean. Therefore, the genetic susceptibility to IBS with respect to GNB3 C825T polymorphism in other Asian ethnicities remains unknown. Fourth, other factors such as gene-environment and gene-gene interactions were not adjusted in the present meta-analysis because of a lack of information; this further confounds the reliability of the present results. Therefore, the present results should be interpreted cautiously.

In summary, the results of the present meta-analysis indicate that there are no associations between GNB3 C825T polymorphism and IBS risk. However, because of the limited available studies, further studies taking ethnicity and IBS subtypes into account are warranted.

The GNB3 gene encodes the β3 subunit of heterotrimeric G-proteins and is able to affect intracellular signal transduction and biological activity. The common causes of irritable bowel syndrome (IBS), such as disturbed gut sensory or motor function, dysfunction of autonomic nervous system and psychiatric disturbance, are all able to alter the intracellular signal transduction.

The current findings of the associations between GNB3 C825T polymorphism and IBS are controversial. The authors conducted a meta-analysis to clarify these associations.

This study furthers the understanding of the association of GNB3 C825T polymorphism and IBS risk.