AIM: To study the three-dimensional structure and distribution of the lymphatics in the rabbit appendix, and to reveal the correlation between the perifollicular lymphatic sinus (PLS) and lymphatics.

METHODS: Freeze-fractured tissues and lymphatic corrosion cast with the Mercox were used for scanning electron microscopy (SEM), and histologic and semithin sections were used for light microscopy. The Mercox was diluted and injected intraparenchymally into the appendix wall. The injected appendixes were cut and put in a concentrated NaOH solution until the tissues were corroded away.

CONCLUSION: The PLS and rich lymphatics in the rabbit appendix may play an important role in the drainage of lymph and the immune function.

Fifteen healthy rabbits of either sex, weighing 2.5-4.0 kg, were used: one for light microscopy with histologic sections, two for scanning electron microscopy (SEM) with fractured tissues, two for semithin sections, and ten for lymphatic corrosion cast.

About 2-3 mL Mercox (CL-2B-5, Velene Hospital, Tokyo, Japan) was diluted to 30%-40% (V/V) solution, then it was injected intraparenchymally into the lower part of the mucosa of the appendix wall. After the injected medium had filled the lymphatics of the rabbit appendix, the injected appendix was cut and put into 5%-20% NaOH solution until tissue elements were corroded away. Thus the corrosion casts were obtained by washing in water. The casts were cut into blocks of appropriate size, then they were dried, coated with gold and observed by SEM[5].

The rabbits were anesthetized with pentobarbital sodium and perfused with 0.85% NaCl and 2.5% PBS through the superior mesenteric artery. The appendixes were cut into small pieces, and freeze-fractured specimens were obtained by conducting electronic staining, dehydrating in a graded series of ethanol, immersing in isoamyl acetate, fracturing with the solution of liquid nitrogen and drying at critical point with liquid CO2. The dried specimens were mounted on a specimen holder, coated with gold and observed by SEM with increasing voltage of 10-20 kV. Semithin section samples were completed by using usual TEM technique, and were observed with a light microscope. 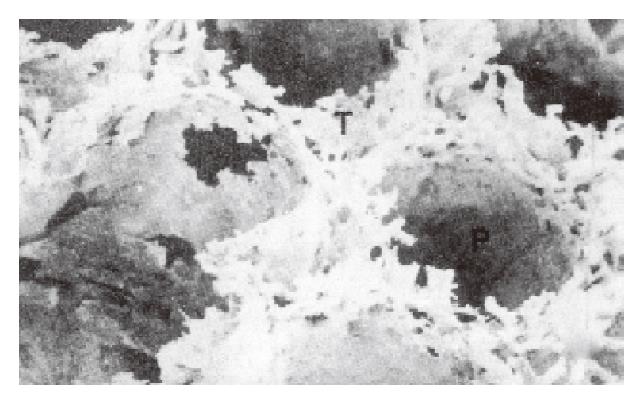 Figure 1 A scanning electron micrograph of lymphatic corrosion cast. The lymphatic capillary plexus (T) in the TDA is connected with a perifollicular lymphatic sinus (P). (SEM, × 40) 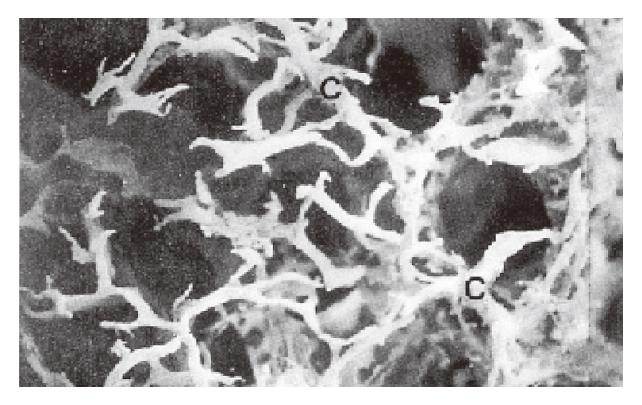 Figure 2 A scanning electron micrograph of lymphatic corrosion casts. A well-developed network of lymphatic capillaries (C) exists in the superficial layer of the appendix mucosa. (SEM, ×30) 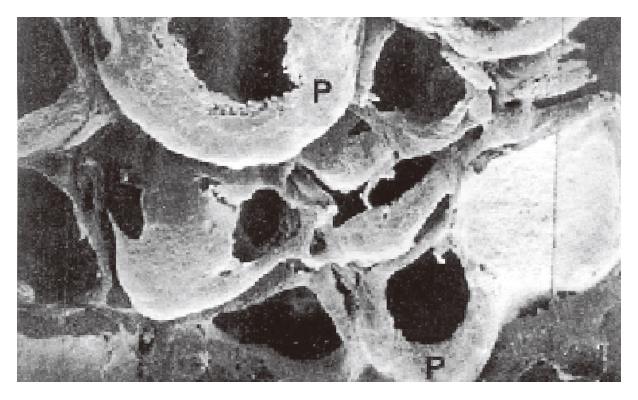 The PLS and lymphatics in rabbit appendix demonstrated by SEM of fractured appendix and the semithin section observations by light microscopy were also similar to the scanning electron microscopic images of the lymphatic corrosion cast.

As we have described, each follicle was surrounded by a well-developed PLS as reported by Ohtani in 1984. Ohtani considered that two adjacent follicles frequently shared one PLS. But we found that each follicle had one PLS; rarely did two adjacent PLS fuse to form a large sinus.

According to our observation, we consider that PLS may have extensive drainage. They communicate with (1) the adjacent one by anastomotic channels; (2) the network of lymphatic capillaries in the mucosa by straight channels; (3) the plexuses of the lymphatic capillaries in TDA by short anastomotic channels; and (4) submucosal lymph channels by short lymphatics. It is suggested that the PLS may transport immune substances and lymphocytes to the network of the superficial layer in the mucosa by straight lymphatics. The immune substances may be supplied by TDA, transferred to the local lymph nodes, then to the lymph circulation. In general, the sinuses may act as a reservoir.

Baba[9] has reported that few lymphatics go to the lymphatic follicle. We have not observed intrafollicle lymphatics in the rabbit appendix.