METHODS: P-glycoprotein (P-GP) was detected by immunocytochemical staining. Expression and amplification of mdr1 gene were detected by nucleic acid hybridization. Cytotoxicity was measured by MTT method.

RESULTS: HCTV2000 cells showed a positive response to monoclonal antibodies against P-GP encoded by the mdr1 gene. Overexpression of mdr1 mRNA was found, but no evidence of mdr1 gene amplification or rearrangement was suggested. Verapamil increased the accumulation of 3H-VCR inside the cells and partially reversed drug resistance to VCR.

CONCLUSION: Overexpression of mdr1 mRNA is one of the important mechanisms of drug resistance in HCTV2000 cell line; however, there may be some other mechanisms which are also involved in this.

Investigating the mechanisms of multidrug resistance (MDR) is one of the methods of raising chemotherapy effects in cancer. Drug-resistant cell lines are an important model system for the analysis of mdr1 gene in human cancer cells. The protein product of mdr1 gene, P-glycoprotein (P-GP), is an energy-dependent drug efflux pump, which decreases intracellular drug accumulation. MDR cell lines have wide cross-resistance to hydrophobic compounds[1]. Verapamil (VRM) may reverse MDR in these cells by competing with antitumor drugs for binding to P-GP[2]. HCTV2000, an MDR cell line of human colon cancer HCT-8 cells, was developed by stepwise selection on exposure to increasing doses of vincristine (VCR). In this report we aimed to study expression and amplification of mdr1 gene, and the effect of reversal of VCR resistance with verapamil, as well as to analyse the mechanisms of drug resistance in HCTV2000 and its parent line.

The HCT-8 line of human colon cancer cells was obtained from the American Type Culture Collection. HCTV2000 cells were 147-fold more resistant to VCR than HCT-8 cells. Cells were grew in monolayer in RPMI-1640 with 10% newborn calf serum, penicillin (100 U/mL) and streptomycin (100 μg/mL). The cultures were incubated at 37 °C in a humidified atmosphere of 5% CO2.

Cells were seeded onto 96-well plates at a density of 2000 cells per well. Drugs were added 24 h later. After incubation at 37 °C for 96 h, 100 μL of 0.5 mg/mL MTT reagent (FLUKA) was added to each well. The plates were then incubated for 4 h, and DMSO was added before absorption at 540 nm was measured with a Dynatech MR700 ELISA plate reader.

Total cellular RNA was prepared by acid-phenol extraction method[5]. Genomic DNA was isolated from cells by the method of Maniatis et al[6].

DNA (10 μg) was digested with the restriction endonuclease EcoR I, electrophoresed on a 0.7% agarose gel, and transferred to nylon filters for Southern blot analysis. Slot blotting filters were prepared with DNA using a BRL blot apparatus. RNA (10 μg) was separated on 1.2% agarose gels containing formaldehyde, and then transferred to a nylon filter. DNA and RNA were cross-linked to the filter by baking for 1 h at 80 °C in an oven. A 32P-labeled DNA probe, a 1.383-kb EcoR I fragment containing the mdr1 coding regions from PHDR5A, was labeled by the random priming method. PHDR5A was provided by Dr. Gottesman (NCI, Bethesda, MD, United States).

Cells were plated at a density of 5 × 105 cells/mL and incubated overnight at 37 °C. Then the medium was replaced with serum-free RPMI1640, and the cells were incubated for 1 h with 3H-VCR (4.6 × 1010 Bq) in the absence or presence of VRM. The cells were washed three times with cold PBS. NaOH solution (1 mol/L) was added to dissolve the cells, and the solution was neutralized with acetic acid. The radioactivities were determined by liquid scintillation counting.

Immunocytochemical staining showed that P-GP could be detected in plasma membrane and cytoplasm of HCTV2000 cells with both JSB-1 and MRK-16. However, in HCT-8 cell line, a low level of P-GP expression was detected with MRK-16, but not with JSB-1 (Figure 1).

Figure 1 Demonstration of P-glycoprotein in HCT-8 (A and C) and HCTV2000 cells (B and D) by immunocytochemical staining with JSB-1 (A and B) and MRK-16 (C and D).
Expression of mdr1 mRNAt

Northern blot analysis was conducted with RNA isolated from the two cell lines. The mdr1 specific probe was hybridized to a 4.5 kb RNA species, which showed high expression in HCTV2000, but no mdr1 mRNA was detected in HCT-8 (Figure 2). 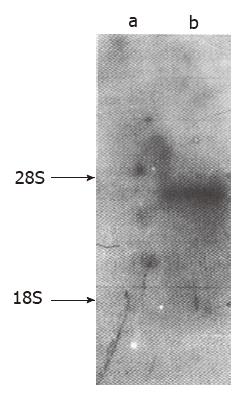 To determine the possibility that overexpression of mdr1 mRNA in HCTV2000 cell line might result from mdr1 gene amplification or rearrangement, genomic DNA from HCTV2000 and HCT-8 was analyzed. DNA slot blot analysis showed that the signal intensity from HCTV2000 was the same as that from HCT-8 cells, and there was no apparent amplification of mdr1 gene in HCTV2000 cells (Figure 3). Hybridization of the Southern blot revealed that mdr1 probe, pHDR5A, was hybridized to five EcoR I fragments in both cell lines and the size and the signal intensity of the five bands from the two cell lines were similar (Figure 4). It is therefore suggested that neither amplification nor rearrangement exists in the HCTV2000 cell line and that overexpression of the mdr1 mRNA in HCTV2000 cells may be correlated with activated transcription of mdr1 gene.

Figure 4 Southern hybridization of mdr1 gene. Ten micrograms of DNA extracted from HCT-8 cell line (a) and HCTV2000 cell line (b) were digested with EcoR I and separated on a 0.7% agarose gel. The arrows indicate the position of hybridization.
Effect of VRM

Reversal of multidrug resistance. Nontoxic or slightly toxic (growth inhibition did not exceed 10%) concentrations of VRM were used in these experiments. The IC50 values of HCTV2000 and HCT-8 cells to VCR were 3651.8 and 24.9 nmol/L respectively, and the index of resistance was approximately 167 when compared with each other. VRM enhanced the cytotoxicity of VCR in both cell lines. A 84- and 4-fold increase in cytotoxicity was produced by 10 μg/mL VRM in HCTV2000 and HCT-8 cells, respectively. Reversal of MDR by VRM in the HCTV2000 cell line was more effective than that in the HCT-8 cell line (Figures 5 and 6). 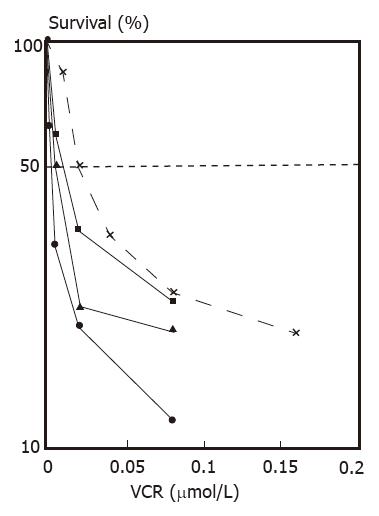 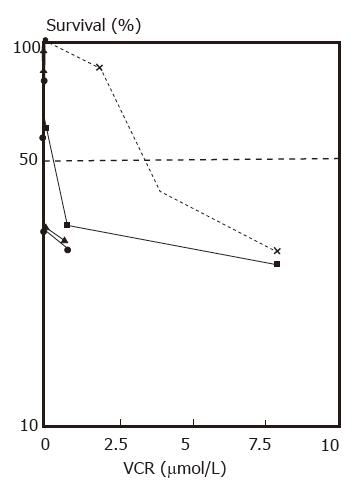 Human colon cancer is intrinsically resistant to chemotherapeutic agents and the exact mechanism of drug resistance is not clear yet. There existed different results in studying the mechanisms of multidrug resistance in the human colon cancer cell line HCT-8. Klohs′s study on HCT-8 cells showed that although verapamil increased adriamycin accumulation and cytotoxicity, surface labelling failed to detect a glycoprotein with appropriate molecular size due to the insensitivity of the technique used[7]. Hunter et al[8], however, detected the expression of P-GP in HCT-8 cells by immunoprecipitation with MAb JSB-1. In this report overexpression of P-GP in both cell lines was observed, and the intensity of the protein staining in HCTV2000 cells was much stronger than that in HCT-8 cells. Drug resistance in both cell lines can be overcome by VRM, which inhibits the function of P-GP. These results can be used to explain the P-GP mechanism of intrinsic drug resistance and acquired drug resistance in this kind of colon cancer cells. JSB-1 and MRK-16 recognize different epitopes in plasma membrane or within cytoplasm and the results would be different under different experimental conditions[4]. Our results suggest that combination of different monoclonal antibodies could reduce false negative rate.