Phlegmonous gastritis is an unusual infection of the gastric wall, which is extremely rare and associated with a poor prognosis. Here, we report the case of a 65-year-old male patient with a history of splenectomy, who had phlegmonous gastritis after esophagectomy. Computed tomography revealed a remarkably distended thoracic stomach, and the gastric wall was locally thickened. Gastric mucosa was red and white in color and significantly edematous on gastroscopy. He was successfully treated with a combination of antibiotics and povidone-iodide intraluminal lavage. In addition to this case, the clinical presentations, imaging examinations as well as treatments of phlegmonous gastritis are discussed.

Phlegmonous gastritis (PG) is an unusual infection of the gastric wall caused by suppurative bacteria. Mortality due to PG approached 92% before the advent of antibiotics and was as high as 64% even after antibiotics became available[1]. Clinical presentations of PG are generally nonspecific and include epigastric pain, vomiting and infection. Therefore, it is extremely difficult to make a correct diagnosis at the early onset, and many patients undergo gastrectomy due to the severity of the disease in the acute phase. Herein, we report a rare PG after esophagectomy which was successfully treated with conservative treatment.

A 65-year-old male patient was admitted with the complaint of epigastric discomfort for 1 wk. He had a history of splenectomy 18 mo previously due to a splenic rupture after a traffic accident. Esophageal erosions located 34 cm below the incisor teeth were revealed by preoperative gastroscopy. Pathological examination of the esophageal lesion indicated adenocarcinoma. Therefore, an exploratory thoracotomy was performed. During surgery, a 3 cm solid mass without well-defined borders was found in the lower esophagus. An esophagus resection followed by supra-arch esophagogastric anastomosis was performed.

However, on the first postoperative night, the patient became febrile with a fever of 39 °C. The next morning, the high temperature continued and the patient suddenly developed dyspnea with SaO2 continuously below 90% after oxygen via a face mask (5 L/min). Physical examination revealed weakened breath sounds in the left lower lobe and laboratory examinations showed decreased PO2 (63.8 mmHg) and elevated leukocytes (21.3 × 104) and neutrophils (90.4%). Chest X-ray showed a large consolidation shadow of the left lung, and both costophrenic angles were obscure (Figure 1). Therefore, tracheal intubation was performed based on the intended diagnosis of respiratory failure. 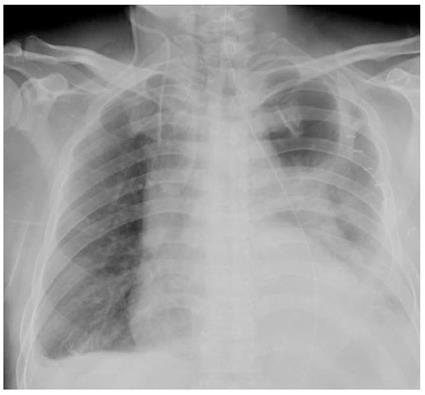 Over the next 5 d, the patient’s body temperature remained at 39 °C. Chest computed tomography (CT) revealed a remarkably distended thoracic stomach, and the gastric wall was locally thickened, pleural and pericardial effusions were also suggested (Figure 2). Gastrointestinal endoscopy revealed congestion and edema of the gastroesophageal anastomosis, the gastric mucosa was red and white in color and significantly edematous, a large number of scattered erosions covered by a layer of purulent exudates were also observed (Figure 3). Thus, the diagnosis of PG, which was suspected on CT, was confirmed. The sputum culture revealed Staphylococcus aureus, whereas the bacterial culture was negative for the gastric aspirate. 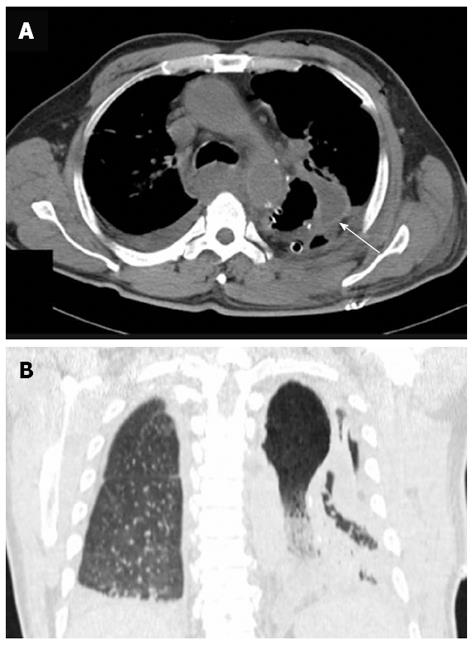 Figure 2 Computed tomography scan. A: Axial computed tomography (CT) imaging of the chest: The CT scan showed a remarkably distended thoracic stomach and a locally thickened gastric wall (arrow); B: Coronal CT scan of the chest: Imaging revealed a thoracic stomach with a large consolidation shadow and in air bronchograms of the left lung, pleural and pericardial effusions were also suggested. 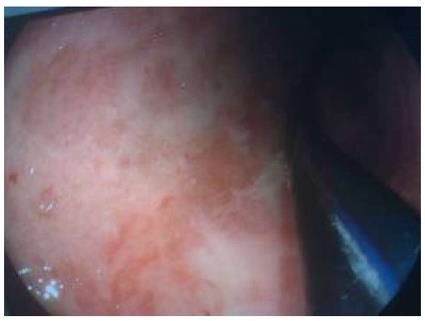 Figure 3 Endoscopic examination of the postoperative stomach. The gastric mucosa was red and white in color, significantly edematous, and scattered erosions covered by purulent exudate were observed. No anastomotic leak was noted.

Following the results of the sputum culture, the patient was treated with a combination of teicoplanin and linezolid (Zyvox), as well as intraluminal lavage with 2.5% povidone-iodine. After 3 d, his temperature decreased, PO2, and PCO2 levels returned to normal, and the patient was successfully extubated. Antibiotics were continued for two weeks and no evidence of gastric mucosa inflammation was detected by gastroscopy. The patient was discharged on the 30th day after surgery.

PG is a rare condition caused by various organisms, affects both sexes and occurs mainly in individuals aged 30-70 years[2]. The etiology of PG is still unknown, alcohol consumption, chronic gastritis, mucosal injury, drugs, immunosuppression and malignancy have been suggested to cause PG[3]. In the current case, PG occurred after esophagectomy, which has been rarely reported in the published literature. It was noted that this patient had a history of splenectomy 18 mo before esophagectomy, although there is no known relationship between PG and splenectomy, decreased immunity due to splenectomy combined with the post-surgical stress response may have facilitated the entry of bacteria into the gastric submucosa and the induction of PG.

The typical clinical presentation of PG is the acute onset of a triad of symptoms consisting of: epigastric pain, vomiting and fever. Other symptoms such as nausea, chills, hematemesis have also been reported[1,4]. The pain is sometimes relieved by sitting in an upright position (Deininger’s sign), and purulent emesis is said to be pathognomonic for PG regardless of its rarity[5]. High leukocytosis, accelerated erythrocyte sedimentation rate, and dysproteinemia are usually seen in peripheral blood analysis.

Imaging examinations are helpful in PG diagnosis. On CT scanning, marked gastric wall thickening and intramural hypodense areas can be seen[6]; while endosonography (EUS) can reveal thickened gastric wall and anechoic areas[4]. On endoscopy, PG gastric mucosa is usually edematous and appears purple in color with dirty necrotic materials covering the surface[7], which indicate serosa penetration or peri-serosa effusion which is rarely seen and is mostly restricted to the gastric wall. In the present case, the patient had severe left lower lobe pneumonia with pleural and pericardial effusions, which suggested bacterial colonization of the gastric mucosa through sputum swallowing due to pulmonary infection.

The culture of gastric pus or a sample taken during the endoscopic procedure may help to identify the bacteria involved and provides a reference for antibiotic selection. Nevertheless, many cases of PG fail to document the presence of bacteria in the gastric wall, but the correct diagnosis can be made without histological documentation or bacterial culture from the gastric aspirate[6], suggesting that a positive culture of gastric secretions is not necessary for the diagnosis of PG. Our patient showed many of the manifestations mentioned above, although no organism was isolated from gastric contents. Laboratory findings of Staphylococcus aureus in sputum, CT imaging and endoscopic findings of pus justified the diagnosis of PG.

The standard of treatment for PG is still not well established. Treatment mainly involves conservative management with antibiotics and surgical gastrectomy. As in our case, which was diagnosed in the early phase, PG can be treated with the correct antibiotics and supportive treatment. Otherwise, gastrectomy should be considered. Surgery can be partial or total dissection depending on the extent of inflammation. However, a review by Kim et al[4] revealed that surgical interventions are superior to antibiotic therapies with mortality of 20% and 50%, respectively. Other treatments such as endoscopic mucosal resection and simple aspiration under endoscopic ultrasonography have also been reported[7].

In conclusion, PG is a rare and fatal condition that needs early diagnosis and appropriate management. Endoscopy, CT, EUS, and pathogen culture can be helpful in the diagnosis. In this article, we present an unusual case of PG after esophagectomy, through early diagnosis and effective antibiotic treatment, the patient recovered successfully. Surgeons should be aware of the possibility of PG when dealing with complex acute abdominal diseases.