The intestinal mucosa is characterized by a high complexity in terms of structure and functions and allows for a controlled demarcation towards the gut lumen. On the one hand it is responsible for pulping and selective absorption of alimentary substances ensuring the immunological tolerance, on the other hand it prevents the penetration of micro-organisms as well as bacterial outgrowth. The continuous regeneration of surface epithelia along the crypt-villus-axis in the small intestine is crucial to assuring these various functions. The core phenomena of intestinal epithelia regeneration comprise cell proliferation, migration, differentiation, and apoptosis. These partly contrarily oriented processes are molecularly balanced through numerous interacting signaling pathways like Wnt/β-catenin, Notch and Hedgehog, and regulated by various modifying factors. One of these modifiers is acyl-CoA synthetase 5 (ACSL5). It plays a key role in de novo lipid synthesis, fatty acid degradation and membrane modifications, and regulates several intestinal processes, primarily through different variants of protein lipidation, e.g., palmitoylation. ACSL5 was shown to interact with proapoptotic molecules, and besides seems to inhibit proliferation along the crypt-villus-axis. Because of its proapoptotic and antiproliferative characteristics it could be of significant relevance for intestinal homeostasis, cellular disorder and tumor development.

Core tip: Acyl-CoA synthetase 5 (ACSL5) activates long-chain fatty acids by coenzyme A linkage and plays a key role in fatty acid metabolism. On the basis of its mitochondrial localization, ACSL5 forms an exceptional member among the acyl-CoA synthetase family. Although its various functions are not yet fully understood, ACSL5 seems to represent a modifier of cellular vitality along the crypt-villus-axis.

Acyl-CoA synthetase 5 (ACSL5) is part of the acyl-CoA synthetase family who plays a key role in de novo lipid synthesis, fatty acid degradation and subsequently membrane modifications. Their main function is the activation of long-chain fatty acids by coenzyme A linkage, these conjugates are primarily utilized for triglyceride synthesis, packed into chylomicrons and secreted through the basolateral membrane[1-3]. Along the intestinal crypt-villus-axis (CVA) they either cause cell proliferation or cell apoptosis[4]. The fatty acid activation requires a two-step reaction, catalysed through these enzymes. The first step results in an acyl-AMP intermediate of ATP. AMP is then replaced with CoA and the activated acyl-CoA is generated. Except for the resulting acyl-CoA, free fatty acids (the substrates of these enzymes) are able to pass through membranes. The ACSL-derived esterification prevents it from leaving the cell. The length of the carbon chain (12-20 C atoms) of the fatty acids defines the substrate specifics of the different acyl-CoA synthetases. On this basis, five different subfamilies were identified[5]. Their sequences differ at N-terminus, which is presumably the reason for their diversity in sub-cellular localisation. ACSL1 and 6 are associated with the plasma membrane. They might play a role in the cellular fatty acid assimilation[6,7]. ACSL4 was mainly found in ER and peroxisomes[8]. The gene ACSL5 lies on chromosome 10q25.1-q25.2[9,10]. The functional protein is localized on the inner mitochondrial membrane[11,12] and has a significant regulatory function in the mitochondrial energy metabolism. The pH-dependence of this molecule is especially important. It shows a high functional activity under alkaline conditions. This observation is of special interest in the case of mitochondria: In contrast to the enclosing cytoplasm their pH is more basic by one point and they show a more alkaline pH with beginning apoptosis[13]. In this context the pH conditions of tumor genesis and a differing functionality of ACSL5 should be considered as well[14].

Analysing the role of ACSL5 in differentiation and senescence of enterocytes, a sensitization to TRAIL-dependent apoptosis was found[4], whilst the Triacsin C-induced apoptosis induction in glioma cells was inhibited. Mashima et al[9] postulated an ACSL5-dependent survival of tumor cells. There is evidence to suggest a cell regulatory involvement of ACSL5 in addition to its lipid modifying function[15].

Triacsin C [1-hydroxy-3-(E,E,E-2’,4’,7’-undecatrienylidine) triazene] was identified as a potent competitive inhibitor of acyl-CoA synthetase activity[16]. Its inhibitory effects depend on the N-hydroxytriazene moiety of the molecule, resulting in a dramatic reduction in cholesterol as well as triglyceride synthesis with non-transition of macrophages to foam cells or enhanced eicosanoid release in leucocytes[17,18]. Kaemmerer et al[18] showed that human ACSL5 is, unlike rat ACSL5, sensitive to the competitive inhibition by triacsin C and does not compensate for other triacsin C sensitive ACSL isoforms.

This mini review outlines the modifying role of ACSL5 in different cellular processes at the interface between proliferation and apoptosis.

The CVA in adult human small intestine is important for maintaining intestinal homeostasis and this process is controlled by regulatory signaling pathways such as Wnt/β-catenin, Notch, Hedgehog, and apoptosis. Canonical Wnt signaling plays a key role in regulating intestinal cell proliferation[19]. A mutation-derived activation of the cascade initiates the adenocarcinoma sequence. Blocking canonical Wnt signals leads to a proliferative arrest of epithelial cells in the crypts of Lieberkuhn. The cell sorting receptors EphB2 and B3 are also target molecules of the pathway, as they control the positioning of Paneth cells towards the crypt bottom, whereas all other differentiated epithelial cells migrate along the CVA[20].

The highest amount of Notch activity is found in intestinal stem cells[21,22]. The transcription factors Hes-1 and Math-1 conduct the differentiation of progenitor cells into enteroendocrine, goblet and Paneth cells[23,24]. Blocking of Notch signaling with the γ-secretase inhibitor dibenzazepine results in a rapid conversion of proliferative crypt cells into post-mitotic goblet cells[25,26].

The Hedgehog pathway with its main epithelial proteins Sonic (Shh) and Indian (Ihh) Hedgehog is of central relevance in villus formation and stem cell homeostasis[27,28].

ACSL5 is expressed in an ascending gradient along the CVA with the highest expression level in enterocytes at the villus tip (Figure 1). It is assumed that ACSL5 sensitizes these enterocytes towards TRAIL-derived apoptosis susceptibility by down-regulation of the anti-apoptotic FLIP and up-regulation of TRAIL-R1 on the cell surface. TRAIL shows a corresponding gradient expression pattern[4]. Gassler et al[4] suggested an ACSL5-dependent link to TRAIL-induced apoptosis by the ceramide neosynthesis, which is known to play a key role in TRAIL-induced apoptosis[29], occurring mainly at mitochondrial membranes[30]. 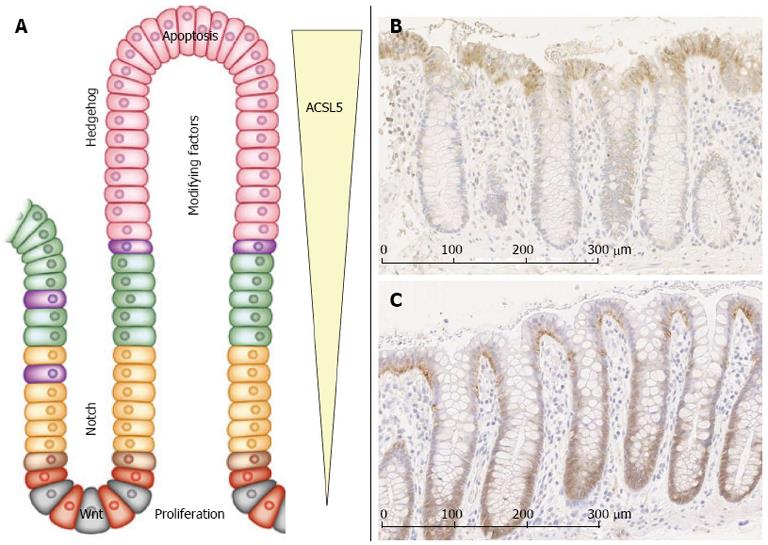 Adenocarcinomas with an invasive phenotype and enhanced proliferation showed decreased levels of ACSL5[4]. A functional correlation between ACSL5-derived apoptosis susceptibility of enterocytes and increased tumor development is assumed[31].

Long-chain polyunsaturated fatty acids show significant modifying functions in the cell cycle, resulting in inflammation and cancer development[32,33]. They enter into cells by means of concentration gradients or transport proteins. The retention in the cell depends on its further metabolic function and intracellular modification. The different ACSL isoforms activate a broad range of long-chain fatty acids and channel them into specific downstream pathways that can vary in a tissue-specific manner[34]. An over-expression of ACSL5 increases the fatty acid incorporation into diacylglycerol and triacylglycerol but does not affect FA used for β-oxidation[35].

A lipid modification of central relevance in several intestinal pathways is palmitoylation. Palmitate, a 16-carbon saturated fatty acid, is covalently bound to more than 100 cellular and viral proteins. In most cases, the fatty acid is thioester (S-acyl) posttranslationally linked to cysteine. The reaction is catalysed by palmitoyl-acyltransferases, where palmitoyl-CoA serves as the donor. The palmitoylation is a dynamic process by means of its reversible linkage[36-38]. Palmitoylation has several effects on molecule functionality and is especially relevant for signaling cascades[39,40]. Protein hydrophobicity and membrane association are increased and protein/protein or protein/lipid interactions are augmented[41]. Modifications derived from fatty acids are described for the proteins associated with Wnt signaling, which are very important for secretion and activity. A fatty acid modification at serine promotes cysteine palmitoylation[42,43]. Without this fatty acid attachment at the Wnt ligand, N-glycosylation and secretion were still possible. In contrast, the absence of N-glycosylation resulted in a decreased secretion rate.

One example for an apoptosis-associated ligand that is regulated by palmitoylation is the human Fas ligand (FasL), responsible for correct signal transduction finally resulting in cell death. Palmitoylation regulates its transmembrane domain and is critical for efficient FasL-mediated killing and FasL processing[44,45].

Palmitoylation of Hedgehog proteins is important for effective signaling. Protein fatty acylation is not only found to be a regulator for membrane association of intracellular proteins, but also for the signaling activity and efficacy of secreted proteins[48,49]. Palmitoylation thus controls mechanisms leading to an altered reaction of the cells towards external signaling.

ACSL5 may play a role in channelling fatty acids towards palmitoylation and other lipid functions with high relevance for cellular behaviour[18]. An over-expression of ACSL5 in HepG2 showed an increased palmitate oxidation[50]. An ACSL5-mediated lipid modification of proliferation- and apoptosis-associated molecules might be an interface in the intestinal CVA.

The intestinal epithelium is subject to continuous self-renewal along the CVA, and progress has been made towards understanding the task of the various signal transduction pathways in proliferation, differentiation, migration and apoptosis of epithelial enterocytes. ACSL5 is a protein localized in mitochondria that plays a key role in fatty acid metabolism and apoptosis. Although its various functions are not yet fully understood, ACSL5 seems to represent a modifier of cellular vitality along the CVA, providing fatty acids for several molecular events.