Patients with Stage IV cholangiocarcinoma are currently not considered to be surgical candidates and are typically offered systemic chemotherapy. Recently, several novel systemic chemotherapy regimens have allowed an initially unresectable cholangiocarcinoma to be resectable. The aim of this article is to present the usefulness of adjuvant surgery in a case of advanced cholangiocarcinoma that was successfully treated with gemcitabine. A 72-year-old man was diagnosed with distal cholangiocarcinoma with liver metastases (cT2N0M1, Stage IV). He underwent metal stent placement in the duodenum to alleviate jaundice. After 18 courses of chemotherapy using gemcitabine without severe drug toxicities, a computed tomography scan showed that the liver metastases in S6 and S7 had disappeared. The patient underwent subtotal stomach-preserving pancreaticoduodenectomy and lymph node dissection. The pathological stage was pT2N0M0, Stage IB. The patient underwent 6 cycles of adjuvant chemotherapy using gemcitabine. The patient is alive and well 6 years and 9 mo after the diagnosis.

Figure 1 Abdominal computed tomography angiography image of the common bile duct. Thickening of the wall of the distal common bile duct, which enhances with contrast, was observed (arrowhead). 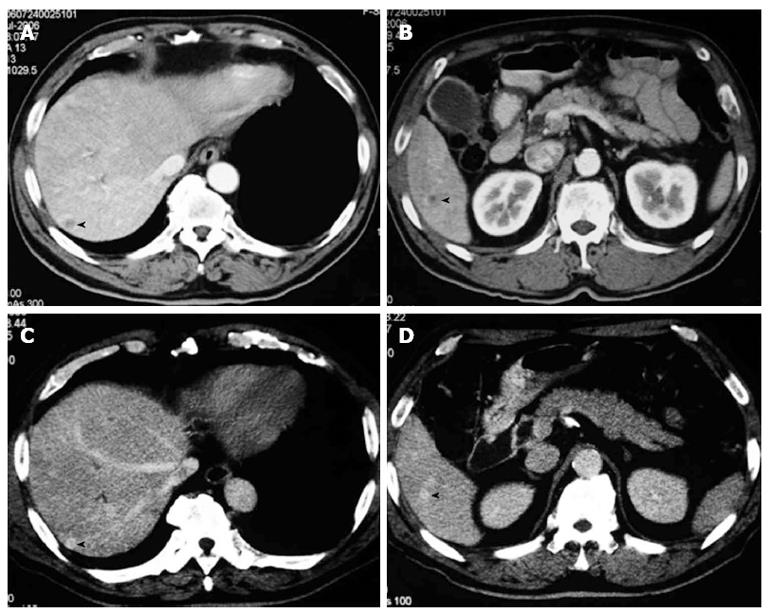 The patient underwent successful placement of a self-expandable metal duodenal stent to relieve jaundice. The patient received a total of 18 cycles of GEM. GEM was administered intravenously at a dose of 800 mg/m2 per day on days 1, 8, and 15 in a 28-d cycle. Adverse events were graded according to the National Cancer Institute Common Toxicity Criteria Grading System (Version 2.0, April 1999)[9]. Severe drug toxicities (grade 3 or 4) were not observed.

After 18 cycles of chemotherapy, CT showed that the two liver metastases in S6 and S7 disappeared. The tumor was clinically downstaged to Stage IB (cT2N0M0).

Four weeks after the completion of chemotherapy, the operation was successfully performed. Peritoneal lavage cytology demonstrated no cancer cells in the abdominal cavity. No microscopic invasion of the resected bile duct stump was observed in an intraoperative frozen specimen. The patient underwent curative resection consisting of SSPPD with D2 lymphadenectomy without resecting any other organs.

Tumor cells were detected in the distal bile duct upon microscopic examination (Figure 3). According to the UICC guidelines, the pathological classification of the tumor was cT2N0M0 Stage IB. The patient was discharged on postoperative day 61 in good condition. The patient subsequently received six cycles of adjuvant GEM chemotherapy similar to the preoperative regimen. The patient is alive at 6 years and 9 mo after the diagnosis and 5 years after the surgery. 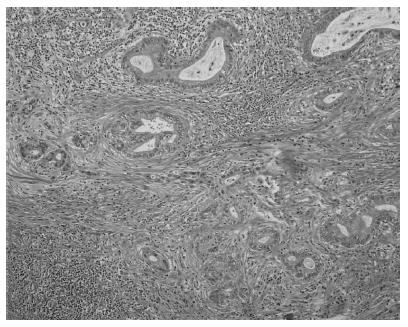 Figure 3 Histopathologic appearance of the cholangiocarcinoma (hematoxylin and eosin, × 200). Tumor cells were detected in the distal bile duct on microscopic examination.
DISCUSSION

The feasibility of adjuvant surgery for cholangiocarcinoma has not been determined. Recently, in colorectal, gastric, and pancreatic cancer, several authors have reported “conversion surgery” or “adjuvant surgery”[14-16]. Suzuki et al[14] demonstrated that adjuvant surgery was effective in 20 advanced gastric cancer patients (Stage IV) based on liver or distant lymph node metastasis. The overall survival of patients in the partial response and curative resection groups was prolonged. The survival of patients with H or N factor was also prolonged when they received curative surgery. However, the survival of patients with P factor was not prolonged. Locally advanced pancreatic cancer may be a good indication for adjuvant surgery after sustained favorable responses to chemotherapy, even in patients with initially unresectable disease[16]. In 2013, Kato et al[17] reported that eight patients with initially unresectable advanced biliary tract cancer who underwent adjuvant surgery had significantly longer survival than 14 patients who were unable to undergo surgery. Of the eight patients in the surgery group, four patients had gallbladder carcinoma and four patients had intrahepatic cholangiocarcinoma. To our knowledge, from 1983 to 2013, in the field of bile duct cancer, only 16 cases in nine reports underwent adjuvant surgery, including the cases in the report[17-25] (Table 1). Of the 16 patients, 10 patients received GEM, 3 received S-1, 2 received GEM and S-1, 1 received GEM combined with cisplatin and fluorouracil, and 1 received cisplatin/interferon α-2b/doxorubicin/fluorouracil-combination chemotherapy. None of the 16 cases involved extrahepatic cholangiocarcinoma. To the best of our knowledge, this is the first report of adjuvant surgery for extrahepatic cholangiocarcinoma.

Medical oncologists and surgeons have identified surgical candidates among patients with initially unresectable colorectal and gastric cancer who responded favorably to multimodal treatment[14,15]. In some cases, the addition of surgery resulted in increased long-term survival. Surgical resection coupled with multimodal treatment is called “adjuvant surgery.” Surgical resection can be classified as curative (no evidence of remaining disease after surgery) or palliative (remaining disease after surgery). Therefore, adjuvant surgery aims to be curative and not palliative after the response to chemotherapy[14].

In a strategy involving adjuvant surgery, adjuvant chemotherapy is considered necessary after the operation. In our patient, the liver metastases showed a surprising complete response without severe toxicity after GEM chemotherapy. Additionally, the patient received adjuvant chemotherapy using GEM as an outpatient and developed no adverse reactions. In previous phase II studies using single-agent GEM, major adverse reactions included neutropenia, leukopenia, and anemia were observed with little severe toxicity[5-7]. The results suggests that GEM is suitable for outpatients because of its mild toxicity.

The UK ABC-02 study defined the standard of care for unresectable advanced biliary tract cancer[26]. Valle et al[26] reported that cisplatin with GEM (GEMC) was associated with a significant survival advantage compared with GEM alone. The median OS was 11.7 mo for GEMC and 8.1 mo for GEM alone[26]. A Japanese trial of 83 patients using the same treatment regimens as UK ABC-02 showed the median survival and overall response rate of GEMC vs GEM alone were 11.2 mo vs 7.7 mo and 19.5% vs 11.9%, respectively. These results were consistent with the results of the UK ABC-02 study. GEMC was found to be effective and well tolerated, which indicates that it could also be a standard regimen for Japanese patients[27].