METHODS: From July 2001 to January 2009, our liver transplant centers carried out 197 LDLTs. The clinical data from 151 cases of adult right lobe living donors (not including the middle hepatic vein) were analyzed. The conditions of the three groups of donors were well matched in terms of the studied parameters. The donors’ preoperative data, intraoperative and postoperative data were calculated for the three groups: Group 1 remnant liver volume (RLV) < 35%, group 2 RLV 36%-40%, and group 3 RLV > 40%. Comparisons included the different remnant liver volumes on postoperative liver function recovery and the impact of systemic conditions. Correlations between remnant liver volume and post-operative complications were also analyzed.

To solve the shortage of liver grafts in adult liver transplantation, an increasing number of transplant centers have used right graft living donor liver transplantation. This surgical method can provide a greater proportion of liver grafts to meet the metabolic demands of recipients. However, right lobe graft donors take more risks and have more complications than left graft donors. This has created considerable controversy with respect to donor safety. At the present time, there have been 17 donor deaths reported, and the morbidity was reported to be in the range of 20% to 30%[1-3].

It has been reported in the literature that donor complications are closely related to remnant liver volume (RLV)[4,5]. Initial experiences from previous studies have suggested leaving a remnant of not less than 30%[6]. Other articles have reported that remnant liver volumes less than 35% do not appear to be a contraindication for right liver procurement in living donors[7].

Written informed consent was obtained from all patients to include their data in this study, which was approved by the HuaXi Ethics Committee and conformed to the ethical guidelines of the 1975 Declaration of Helsinki.

An LDLT was completed through a right subcostal incision with an upward midline extension. Intraoperative cholangiography via cystic duct cannulation was required to evaluate the anatomy of the bile duct. A right hilar dissection was then performed to isolate the right hepatic artery, right portal vein, and right hepatic duct[11]. The right lobe of the liver was then rotated towards the left side for division of the ligaments on the right side of the liver, the minute venous branches between the anterior surface of the inferior vena cava and the posterior surface of the paracaval portion of the caudate lobe. To prevent impeding the circulation, the right hepatic vein and the right inferior hepatic veins that were larger than 5 mm were preserved until the time of harvesting.

The mean ± SD of the data are presented. The SPSS program (version 15.0, SPSS Inc., United States) was used for the statistical analysis. After testing for normal distribution using Kurtosis and Skewness tests, descriptive variables including pre-operative, intra-operative, post-operative and prognostic parameters, were calculated. Fisher’s exact test was used to detect the differences among the groups for categorical variables, including gender. Independent-sample t tests were calculated to detect differences among the groups for continuous random variables including HGB, ALT, AST, TBIL, volumetric data, postoperative INR, ICU time, hospital stay, and reasonable and customary (R and C). A correlation analysis using the χ2 test was conducted to determine the incidence of complications. The difference was considered significant if P < 0.05.

The donors’ anthroposomatology data, operation time, and preoperative blood test indicators were calculated for the three groups: Group 1 RLV < 35%, group 2 RLV 36%-40%, and group 3 RLV > 40%. These data are shown in Table 1. No significant differences were observed between the donors’ gender, age, height, weight, and operation time. Preoperative data on ALT, AST, TBIL and HGB were also collected among the three groups of donors. These results suggested that the conditions of the three groups of donors were well matched in terms of the studied parameters. 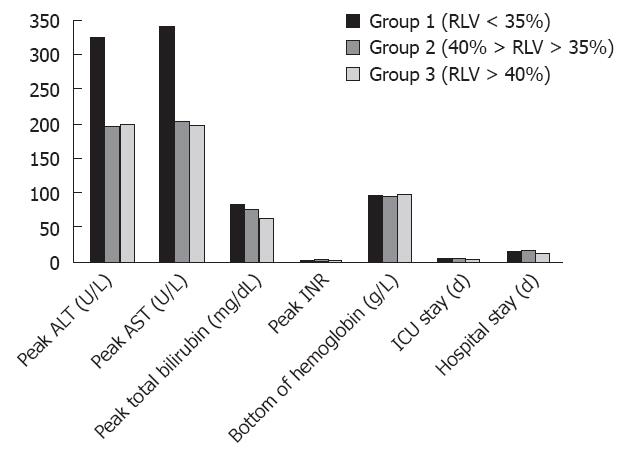 The evaluation of suitable donors is related to both donor and recipient safety. The volume of the graft liver should ensure the absolute safety of the donor, but also meet the needs of the recipient. For example, if the remnant liver volume is too small for the body, it can lead to acute liver failure in the donor. If the graft is too small, it can result in small-for-size graft syndrome[22,23]. In general, the younger the donor, the better is the liver’s regenerative capacity[24], thus donors aged between 18 and 60 years are required.

In this study, donors age ranged from 18 to 60 years. During the preoperative examination, there were no obvious abnormal liver functions, obvious blood vessels, biliary anatomical abnormalities, or intraoperative liver biopsies with serious fatty degeneration. According to the remnant liver volume, the study group was divided into three groups. Data for each group of donors was recorded, and included preoperative parameters, operative time, and intraoperative blood loss. No statistical differences between the groups were found. The three groups also had homogeneity of the body, excluding other factors of donor recovery.

Postoperative data revealed that the ALT and AST peaks in group 1 donors were significantly higher than those in the other two groups. There were no significant differences (P = 0.915 and 0.893, respectively) for the ALT peak or AST peak between groups 2 and 3. The ICU time in group 1 donors was significantly longer than that in group 2 and 3 donors. No statistical differences in ICU time between groups 2 and 3 were observed.

In LDLT, there are three possible types of short-term complications. One type of complication includes bleeding, biliary leakage, embolization, liver failure, metabolic abnormalities caused by cholinesterase, and hypophosphatemia. The second are open surgery-related complications and include intra-abdominal infections, incisional hernias, adhesions, and intestinal obstruction. There are also complications associated with anesthesia.

In summary, when the volume of a remnant liver was less than 35% of the standard liver volume, the volume of the remnant had a significant effect on the recovery of liver function and ICU time. In addition, the occurrence of complications was closely related to remnant liver volume. Recipients were only available if good results were expected. Therefore, the interests of the donor should be accounted for to minimize their risks during surgery.

We thank the specialists affiliated with the Chinese Liver Transplantation Registry for their assistance in data collection and analysis.

An increasing number of transplant centers have used right graft living donor liver transplantations. This surgical method could provide a greater number of liver grafts to meet the metabolic demands of recipients. However, right lobe graft donors take more risks and have more complications than left graft donors. This has created considerable controversy with respect to donor safety. At the present time, 26 donor deaths have been reported, and morbidity was reported to be in the range of 20% to 30%.

The literature has reported that donor complications are closely related to remnant liver volume (RLV). The authors retrospectively examined the RLV in right graft donors and compared those donors with other different RLVs.

This has created considerable controversy with respect to RLV and donor safety. The aim of the present study was to assess the relationship between donor recovery, complications and the volume of remnant liver.

This study is an analysis of 151 cases of adult right lobe living related donor to determine the effect of volume of the remant liver on post operative complications. The conclusions reached was that volumes less than 35% of total liver volumes were associated with increased complications and length of recovery. This is a significant study adding further to the knowledge in this area of liver transplanation.