Here we present the case of a 79-year-old woman who complained of acute abdominal pain, vomiting and diarrhoea. Laboratory exams demonstrated a severe metabolic imbalance. Abdominal X-rays showed bowel overdistension and pneumatosis of the stomach wall. Abdominal tomography revealed infarction of the stomach, duodenum and small bowel due to thrombosis of the celiacomesenteric trunk. Exploratory laparotomy revealed ischemia of the liver, spleen infarction and necrosis of the gastro-intestinal tube (from the stomach up to the first third of the transverse colon). No further surgical procedures were performed. The patient died the following day. To our knowledge, this is the first reported case about severe gastro-intestinal ischemia due to thrombosis of the celiacomesenteric trunk, a rare anatomic variation of the gastrointestinal vascularisation.

The majority of the blood supply of the gastrointestinal tract is provided by the anterior branches of the abdominal aorta: celiac trunk and superior mesenteric artery. Usually, the aforementioned branches arise independently from the abdominal aorta, the first one at the level of the twelfth thoracic vertebra, the second one at the level of the first lumbar vertebra. Anomalies of vascularisation of the gastro-intestinal tract are frequent, but the presence of the celiacomesenteric trunk (derived by common origin of celiac trunk and superior mesenteric artery) is rare. The injury of the trunk can have lethal effects on the organism. Here we describe the first reported case of severe ischemia of the gastrointestinal tract due to thrombosis of the celiacomesenteric trunk.

In September 2011, a 79-year-old woman arrived at the emergency department of San Biagio hospital with severe and diffuse abdominal pain and tenderness, more marked in the lower abdominal quadrants, with signs of peritoneal irritation. The area of hepatic dullness was present at percussion and intestinal peristalsis was diminished. The patient was apyretic and eupnoic at rest. Laboratory analyses demonstrated increased inflammatory markers (neutrophilic leukocytes, polymerase chain reaction), acute renal failure (creatinine: 5.85 mg/dL) and severe metabolic acidosis. No pathological signs were found at chest X-rays, whereas abdominal X-rays revealed gaseous overdistension of the small bowel and pneumatosis of the stomach wall (Figure 1). 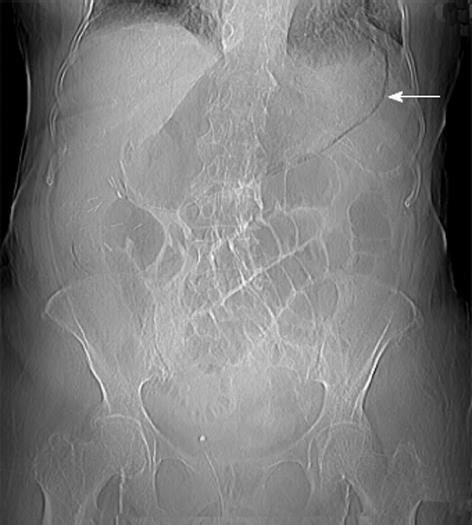 Figure 1 Abdominal X-rays. Gaseous overdistension of the small bowel. The arrow points the pneumatosis of the stomach wall.

The radiological findings were subsequently confirmed by computed tomography of the abdomen performed without iodinated contrast due to renal failure of the patient. Tomography demonstrated pneumatosis of the wall of the stomach, duodenum and small bowel. Air was also present within the superior mesenteric and portal veins with intraparenchymal distribution to ventral portions of the left liver and fourth segment (Figure 2A), because of the advanced stage of arterial infarction. 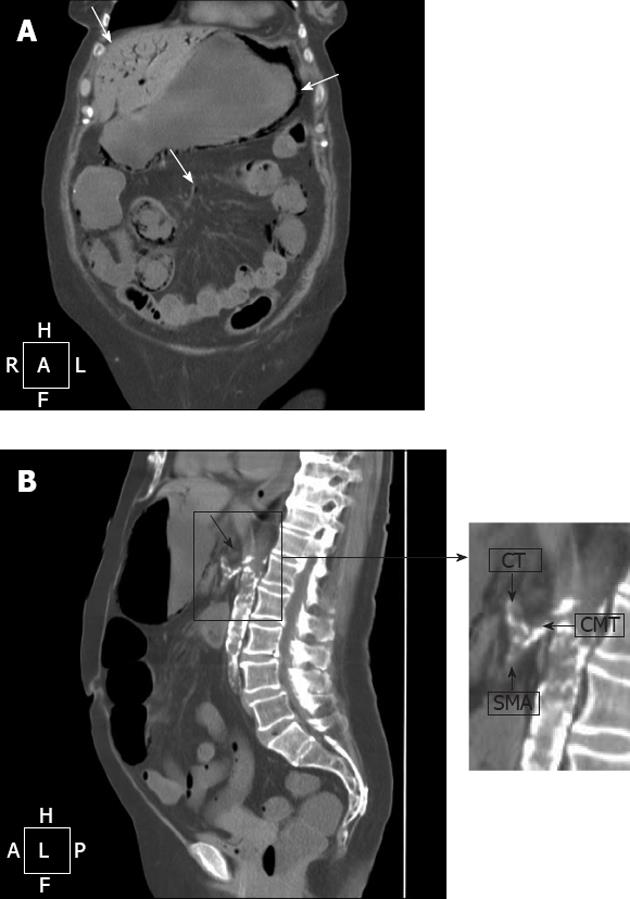 Figure 2 Computed tomography of the abdomen. A: Pneumatosis of the wall of stomach and small bowel (arrow in the right). Intraparenchimal air in ventral portions of the left liver and fourth segment (arrow in the left); air within the branches of the mesenteric vein (arrow in the centre); B:Thrombosis of the celiacomesenteric trunk (CMT) (arrow). In the detail: common origin of celiac trunk (CT) and superior mesenteric artery (SMA) from the CMT.

The axial scan evidenced the thrombosis of the celiacomesenteric trunk, which justified the radiological findings (Figure 2B); no further arterial vessel directed to the gastro-intestinal tract was identified by tomography.

Exploratory laparotomy showed ischemia of the liver, spleen infarction and necrosis of the stomach, duodenum, small bowel and large intestine (from the caecum to the first third of transverse colon). No further surgical procedures were performed. The patient died the following day.

The celiac trunk and superior mesenteric artery supply the majority of the blood to the gastrointestinal tract. Usually, the celiac trunk is a short artery that arises from the anterior wall of the abdominal aorta at the level of the twelfth thoracic vertebra; it divides almost immediately into three branches: left gastric, splenic and common hepatic artery.

The celiac trunk supplies the liver, stomach, pancreas and superior part of the duodenum[1,2].

The superior mesenteric artery arises from the anterior wall of the abdominal aorta at the level of the first lumbar vertebra. It runs down behind the head of the pancreas and ahead of the uncinate process of the pancreas and the third part of the duodenum. It descends anteriorly into the mesentery of the small intestine. Its right branches are inferior pancreatico-duodenal (this vessel forms an anastomosis with the superior pancreatico-duodenal artery, branch of the gastroduodenal artery), right colic, middle colic and ileo-colic; its left branches are 4-6 jejunal and 9-13 ileal arteries.

The superior mesenteric artery supplies the pancreas, duodenum (from the second to the fourth part), small bowel and colon from the caecum to the right half of the transverse colon[1,2].

Variations of the normal vascularisation described above may be caused by the retention or disappearance of the roots of the primitive arterial plexus, as indicated by Tandler[3] in 1908. The fetal digestive tube is supplied by four primitive splanchnic roots which arise from the abdominal aorta. There is a ventral longitudinal anastomosis (Lang’s anastomosis) between these branches (Figure 3): the closure of the longitudinal anastomosis between the third and the fourth root and the disappearance of the central two roots lead to normal anatomy. Retention of the ventral longitudinal anastomosis higher than the fourth root keeps one or more celiac trunk branches with the superior mesenteric artery; disappearance of the first or fourth root causes a common celiacomesenteric trunk[2,4,5]. Moreover, the simple arboriform scheme of the gastroduodenal and hepatobiliary vasculature is profoundly altered by the growth of the liver and pancreas, and by the assumption of a curved form in the stomach and duodenum. These factors operate to complicate the branching of the coeliac axis and the superior mesenteric artery[6]. 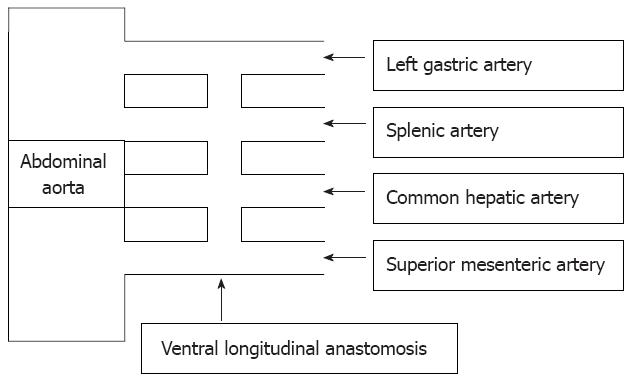 In our case, the celiacomesenteric trunk was formed by an anomalous separation of the ventral longitudinal anastomosis, with the common hepatic, left gastric and splenic arteries joining with the fourth root, as shown in Figure 4. 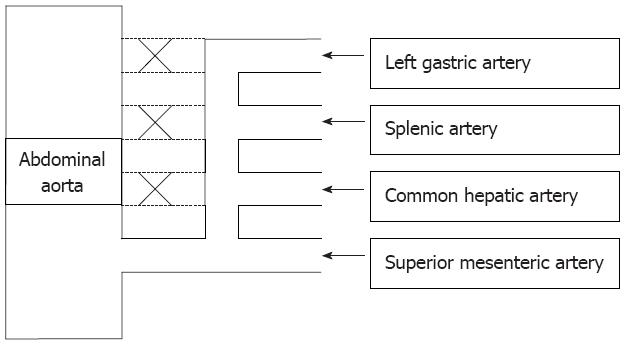 The celiacomesenteric trunk is one of the most striking among the different variations of the normal vascularisation of the gastro-intestinal tract[1,2,4-7]: it is found in 1%-2% of all anomalies involving the celiac axis[1,8-10]. Full comprehension of the topics as knowledge of the different anatomical variations of the arterial supply of the gallbladder, liver, stomach and colon is crucial in cholecystectomy, hepatobiliary and gastro-intestinal surgical procedures[6]. Without knowledge of the arterial architecture of the patient in this critical region, surgery may lead to a considerable risk of errors occasionally leading also to lethal complications[11].

Different classifications of these anatomical variations are present in the literature; however the most widely used are those indicated by Morita[12], Michels[13] and Olry et al[14]. The present case belongs to type I’b of Morita’s classification and to type 6 of the Michels’s classification.

The discovery of a celiacomesenteric trunk is often fortuitous during autoptic dissections[15-17] or can be accidentally detected by angiography or abdominal computed tomography scanning[5,8,10]. It can accompany different clinical situations, such as aneurysm[7,10,18], chronic occlusive disease [9,18], compression by abdominal aorta aneurysm or aortic dissection[18], celiac compression syndrome[9,19], but the large gastrointestinal infarction caused by thrombosis of the celiacomesenteric trunk, to our knowledge, has never been previously reported.

In the current case, the celiacomesenteric trunk arose at the level of the first lumbar vertebra and then, after a stretch of about one centimetre, it divided in two branches, superior (hepato-gastro-splenic trunk or celiac trunk) and inferior (superior mesenteric artery). The thrombosis of the origin of the celiacomesenteric trunk had a lethal effect on the patient because it caused the full stoppage of the splanchnic arterial supply and consequent ischemia. In fact, in this rare situation a single artery is the sole source of vascularisation of the supramesocolic organs and collateral flow is only possible from the inferior mesenteric, phrenic, oesophageal and retroperitoneal arteries[1]. Evidently, the condition of generalized atherosclerosis has prevented any collateral flow.

In conclusion, the present clinical report describes a rare anomaly involving the celiac axis and, especially, the dramatic consequences related to the complete thrombosis of the celiacomesenteric trunk. This condition has important wide-ranging clinical implications because it compromises the blood supply of a large portion of the gastrointestinal tract and it may put at severe risk most of the abdominal viscera.

The authors thank Mrs. Milena Ruggeri and Professor Laura Zonta for their precious and irreplaceable help.