AIM: To establish if the juice of Moro, an anthocyanin-rich orange, may improve liver damage in mice with diet-induced obesity.

CONCLUSION: Moro juice counteracts liver steatogenesis in mice with diet-induced obesity and thus may represent a promising dietary option for the prevention of fatty liver.

Nonalcoholic fatty liver disease (NAFLD) is a chronic metabolic disorder with significant impact on cardiovascular and liver-related mortality[1,2]. NAFLD is closely associated with obesity, dyslipidemia, diabetes and the full spectrum of the metabolic syndrome[3,4], with insulin resistance as a common pathophysiological determinant[5]. Lifestyle, that is, dietary habits and physical activity, plays a pivot role in the pathogenesis of the metabolic syndrome[6]. Likewise, dietary factors have been shown to exert a major role in the development of fatty liver[7]. Recently, the consumption of foods and beverages containing fructose has been identified as a risk factor for NAFLD[8]. Nonetheless, despite their fructose content, fruits are also rich in different polyphenolic compounds that exert several beneficial effects on health, mainly by modulating expression of key enzymes involved in glucose sensitivity and lipid homeostasis[9].

Anthocyanins (ACNs) are water-soluble plant polyphenolic pigments that confer a typical blue, red or purple color, and are contained especially in berries, blood oranges and pigmented corn and potato[10]. ACNs have been attributed several putative therapeutic roles, including beneficial effects on obesity and related metabolic complications[11]. In this respect, Tsuda et al[12] firstly showed that ACN from purple corn prevented obesity, dyslipidemia and visceral fat inflammation in mice fed a high-fat diet (HFD). Recently, a further demonstration of the putative hepatoprotective properties of ACN has been provided by Liu et al[13], who observed that administration of protocatechuic acid, the major in vivo metabolite of the main ACN cyanidin-3-O-β-glucoside, reduced gene expression of lipogenic enzymes in the liver, thus leading to a decreased hepatic lipid accumulation. In vitro and in vivo experiments suggest that ACNs can modulate gene expression of several adipocytokines and regulate the pathways involved in lipogenesis and fat accumulation[12,14]. ACNs are contained also in blood oranges, a variety of sweet orange (Citrus sinensis) with an intense red pigmentation[15]. A recent study has demonstrated that blood orange consumption inhibits fat accumulation in mice[16] and may represent a promising dietary tool for the treatment of obesity.

In the current study, we aimed at clarifying whether consumption of the juice of Moro, a blood orange cultivated in Sicily, Italy, improved liver steatosis in mice fed HFD; a physiological model of NAFLD and metabolic syndrome.

MATERIALS AND METHODS
Animals and treatments

All procedures fulfilled the Italian Guidelines for the Use and Care of Laboratory Animals. Eight-week-old male C57BL6/J mice were purchased from Charles River Laboratories (Calco, Italy). Animals were maintained in a temperature- and light-controlled facility for 12 wk. Diets were obtained by Harlan Teklad (Madison, WI, United States). The standard diet (SD) provided 3.3 kcal/g with 60% carbohydrates, 23% proteins and 17% fat. The HFD provided 5.2 kcal/g with 60% fat, 20% proteins and 20% carbohydrates. Mice were distributed in three groups: group I included six mice fed SD and permitted ad libitum consumption of water (SD + water); group II comprised six mice fed HFD and permitted ad libitum consumption of water (HFD + water); group III comprised six mice fed HFD and permitted ad libitum consumption of Moro orange juice instead of water (HFD + Moro). Moro fruits were collected in the experimental farm of the Research Center for Citric Culture and Mediterranean Crops (Acireale, Italy). Fruits were immediately stored at 4 °C and squeezed a few days later; the juice obtained was pre-filtered and stored at -20 °C in aliquots of 0.5 L. Every 2 d, frozen juice aliquots were thawed, filtered and put in the bottle of each cage. Fruit juice analysis was performed as previously described[16]. Food and beverage consumption was recorded twice weekly; body weight was recorded weekly. After sacrifice by CO2 asphyxiation, blood and liver samples were obtained, processed and stored for further analysis.

Reactions were performed in a 20 μL mixture containing cDNA, specific primers of each gene, and the SYBRR GreenER™ qPCR SuperMix. The specific PCR products were detected by the fluorescence of SYBR Green, the double-stranded DNA binding dye. The relative mRNA expression level was calculated by the threshold cycle (Ct) value of each PCR product and normalized with that of glyceraldehyde-3-phosphate dehydrogenase by using comparative 2ΔΔCt method. Primer sequences are shown in Table 1.

Moro juice had an ACN content of 85 mg/L. Food intake was identical among the three experimental groups (SD + water, 3.1 ± 0.5 g/d vs HFD + water, 3.0 ± 0.8 g/d vs HFD + Moro, 3.1 ± 0.7 g/d). The amount of Moro juice intake (4.1 ± 0.75 mL/d) did not differ from the amount of water intake in the control groups (4.0 ± 1.2 mL/d). All mice had similar body weight at the start of the experiment, and after 12 wk, mice fed HFD + water had higher body weight compared with SD mice (Figure 1A). Strikingly, mice fed HFD + Moro had the same body weight gain as mice fed SD. This effect on body weight gain occurred despite the fact that mice fed HFD + Moro received a 10% higher energy intake, due to the sugar content of the juice, as compared to mice fed HFD + water (Figure 1A). Obese mice had increased serum total cholesterol, triglycerides and ALT as compared to the SD group (Figure 1B-1D). Moro juice decreased serum total cholesterol and triglycerides, and reduced serum ALT to the levels of lean controls (Figure 1B-D). Furthermore, orange juice consumption significantly enhanced insulin sensitivity, as demonstrated by the area under curve derived from ITT, which was 8685 ± 516 in mice fed HFD + water and was reduced to 7225 ± 718 in the HFD + Moro group (Figure 2). 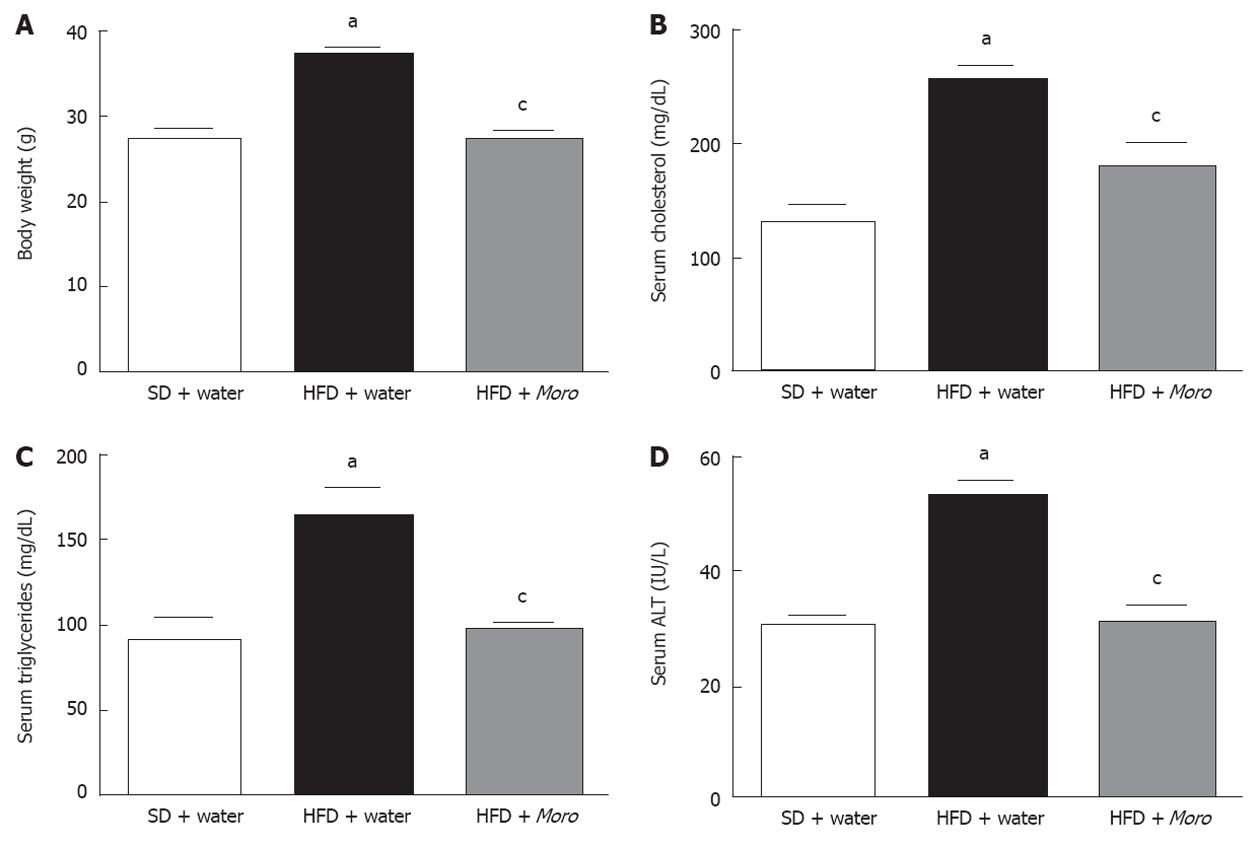 Figure 1 Effects of Moro juice on body weight and serum parameters. A: Body weight was markedly increased in mice fed high-fat diet (HFD) and was decreased to the levels of lean mice by Moro juice; B: Serum total cholesterol was significantly reduced in mice drinking Moro; C and D: Serum triglycerides (C) and alanine aminotransferase (ALT) (D) were restored to the levels of lean mice. aP < 0.05 vs standard diet (SD) + water; cP < 0.05 vs HFD + water. 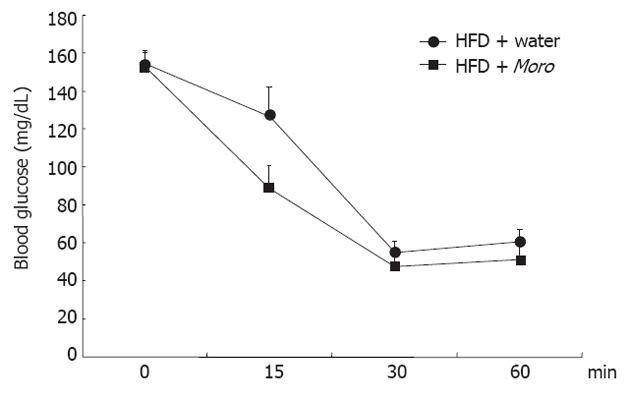 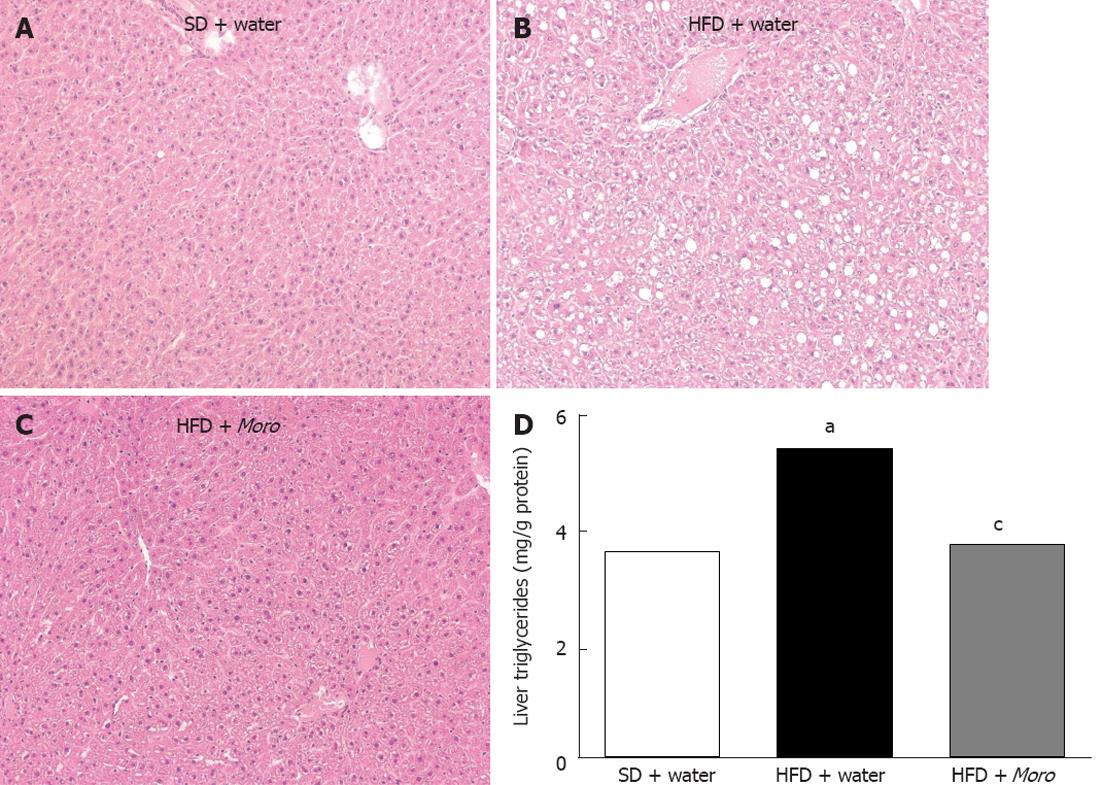 In this study, we explored the effect of the consumption of the juice of Moro, an ACN-rich orange cultivated in the Mediterranean region, on liver steatosis in mice with diet-induced obesity. In previous experiments in mice fed SD, we observed that C57BL6 mice and other strains tolerated the substitution of drinking water with orange juice as the only drinking source, had similar food intake, and did not show any behavioral abnormality. Here, we demonstrated that Moro juice drinking reversed most of the metabolic abnormalities exhibited by obese mice, including fatty liver.

Our results are in agreement with previous experimental data suggesting that ACNs from different fruits and vegetables are able to exert beneficial effects on several metabolic aspects related to obesity[11]. One common effect of ACN administration both in diet-induced and genetic models of obesity is the reduction of body weight and of visceral fat. In this respect, Kwon et al[18] showed that ACN extracted from black soybean led to improvement in dyslipidemia and a decrease in visceral adiposity in rats fed HFD. Similarly, extracts from tart cherries ameliorate dyslipidemia and decrease liver fat content in genetically insulin-resistant rats[19], as does cyanidin 3-glucoside in db/db mice[20].

As regards the molecular events underlying the effects of Moro on liver lipid metabolism, we demonstrated that a major mechanism is induction of PPAR-α. PPAR-α is a key transcription factor promoting lipolysis and lipid oxidation in different tissues[21]. Mice lacking PPAR-α develop obesity and liver steatosis[22]; similarly, the hepatic levels of PPAR-α are decreased in patients with NAFLD[23], and pharmacological agonists are able to improve liver steatosis[24]. Previous studies have suggested that PPAR-α induction is involved in the antisteatotic effect of extracts containing ACNs in different models of obesity[19,20]. Along with the promotion of lipid oxidation, Moro juice consumption induced the inhibition of lipogenesis. In this respect, a major mechanism for the antisteatotic effect is the reversion of LXR-α expression. LXR-α is a nuclear hormone receptor that promotes lipogenesis[25], which is increased in the liver of patients with NAFLD[26]. LXR-α stimulates lipogenesis through upregulation of enzymes of de novo lipogenesis such as FAS[25]. Suppression of LXR-α expression and activity exerts potent antisteatotic effects in the liver[27]; some flavonoids have been shown to inhibit LXR-α[28].

Besides the effects on lipid homeostasis, the beneficial impact of Moro on insulin sensitivity is also noteworthy. Insulin resistance is the metabolic hallmark of patients with NAFLD[29]. Studies using the hyperinsulinemic-euglycemic clamp coupled with infusion tracers have demonstrated that hepatic fat content is directly related to insulin resistance in the liver, skeletal muscle, and adipose tissue of obese subjects[5]. In contrast, recent findings have demonstrated that liver triglyceride content, not visceral adipose tissue volume, predicts the impairment of insulin sensitivity and of very low density lipoprotein secretion in patients with obesity[30,31]. Although mice drinking Moro juice remained hyperglycemic, probably because of the sugar content, the ITT unequivocally revealed that Moro juice exerted insulin-sensitizing activity. An insulin-sensitizing effect has been demonstrated for ACN-rich extracts from bilberry in genetically obese mice[32], and for dietary blueberry in mice fed HFD[33].

In conclusion, in this study, we demonstrated that the juice of Moro exerts metabolic hepatoprotective effects due to changes in the expression of several enzymes involved in lipid homeostasis. Thus, the dietary administration of this food may be effective in preventing liver steatosis, and may be considered as a nutritional approach for the prevention of NAFLD. Clinical trials are now warranted.

Nonalcoholic fatty liver disease (NAFLD) is a chronic metabolic disorder with significant impact on cardiovascular and liver-related mortality. Lifestyle, that is, dietary habits and physical activity, plays a pivot role in the pathogenesis of NAFLD.

Anthocyanins (ACNs) are water-soluble plant polyphenolic pigments that confer a typical blue, red or purple color, and are contained especially in berries, blood oranges, and pigmented corn and potato. ACNs have been attributed several putative therapeutic roles, including beneficial effects on obesity and related metabolic complications. Diet enriched with ACNs may provide a useful tool to counteract liver steatogenesis.

ACNs are contained in blood oranges, a variety of sweet orange (Citrus sinensis) with an intense red pigmentation. A recent study has demonstrated that blood orange consumption inhibits fat accumulation in mice. Furthermore, the administration of protocatechuic acid, the major in vivo metabolite of ACN, reduces the activity of lipogenic enzymes in the liver, thus leading to decreased hepatic lipid accumulation. The data in this article demonstrated for the first time that Moro juice counteracted liver steatogenesis in mice with diet-induced obesity, through modulation of enzymes involved in lipogenesis and lipid oxidation. Thus, Moro juice consumption may represent a promising dietary option for prevention of fatty liver.

ACNs are water-soluble pigments that belong to the family of flavonoids. They are contained in berries, blood oranges, and pigmented corn and potato. They are able to modulate lipid and glucose metabolic pathways in humans.

It is interesting to readers and may be effective dietary supplements for NAFLD. The manuscript described an interesting finding about the protective effect of this orange juice on the development of fatty liver induced by a high-fat diet in mice.