AIM: To establish a rat ethanol gastritis model, we evaluated the effects of ethanol on gastric mucosa and studied the preventive effects of geranylgeranylacetone on ethanol-induced chronic gastritis.

METHODS: One hundred male Sprague-Dawley rats were randomly divided into 4 equal groups: normal control group, undergoing gastric perfusion of normal saline (NS) by gastrogavage; model control group and 2 model therapy groups that underwent gastric perfusion with ethanol (distillate spirits with 56% ethanol content) by gastrogavage for 4 wk. Low or high doses of geranylgeranylacetone were added 1 h before ethanol perfusion in the 2 model therapy groups, while the same amount of NS, instead of geranylgeranylacetone was used in that model control group. The rats were then sacrificed and stomachs were removed. The injury level of the gastric mucosa was observed by light and electron microscopy, and the levels of prostaglandin 2 (PGE2), endothelin-1 (ET-1) and nitric oxide (NO) were measured by radioimmunoassay and the Griess method.

CONCLUSION: Administration of geranylgeranylacetone was correlated with a more favorable pattern of gastric mucosa damage after ethanol perfusion. The mechanism could be related to regulation of ET-1, NO and PGE2.

The liver is a main organ for ethanol metabolism. The gastrointestinal tract is also involved in the ethanol metabolic process. Research[1] has reported that binge drinking or long-term drinking can cause acute or chronic gastric mucosal injury. Ethanol can be converted into acetaldehyde in first-pass metabolism in the gastrointestinal tract, which may have a carcinogenic affect on the gastrointestinal tract through local toxic effects. Geranylgeranylacetone is a derivative of terpenes. Studies have shown that geranylgeranylacetone has a therapeutic effect on chronic gastritis, digestive ulcers and portal hypertensive gastropathy[2-5]. There have been few studies on the repair mechanisms of gastric mucosal damage caused by ethanol. By using a rat ethanol gastritis model, we aimed to study the effect and mechanisms of geranylgeranylacetone on repairing gastric mucosa by observing the histological and ultrastructure changes and detecting the expression levels of plasma endothelin-1 (ET-1), serum nitric oxide (NO) and gastric mucosal prostaglandin 2 (PGE2) in this research.

Adult male Sprague-Dawley (SD) rats, 8 wk old, weighing 200 ± 50 g, were purchased from the Animal Center of Zhejiang University of Traditional Chinese Medicine. They were fed in a specific pathogen free environment with 12 h of light a day with unlimited drinking water. Geranylgeranylacetone was manufactured by Japan Eisai Co., Ltd., and packed by the Suzhou Eisai Pharmaceutical Co. A kind of liquor (Trade name: Red Star Erguotou, with 56% ethanol, manufactured by a general Beijing brewing factory) was used for gastrogavage to establish an ethanol-induced gastritis model in rats. The ET-1 radioimmunoassay determination kit was purchased from Beijing North Institute of Biotechnology Technology. The PGE2 radioimmunoassay kit was purchased from the Beijing Huaying Biotechnology Research Institute.

Groups: One hundred adult male SD rats were randomly divided into four groups, including the normal control group, the model control group, the low-dose model therapy group (50 mg/kg) and the high-dose model therapy group (200 mg/kg). The ethanol gastritis model was built by following an established procedure[6]. Red Star Erguotou liquor with 56% ethanol content was used for feeding the laboratory rats by gastrogavage. On every Tuesday and Friday, the rats were fed with ethanol after fasting for 12 h (food was removed on every Monday and Thursday at 9 pm, and gastrogavage was performed on the next day at 9 am). The dose of ethanol was 8 g/kg body weight. The conversion formula was: weight of ethanol (A) = liquor volume (mL) × ethanol content (vol/vol) × ethanol density (8 g/kg). The normal control group received the same amount of normal saline instead of ethanol. All laboratory rats were administered treatment for 4 wk. In the model therapy group, geranylgeranylacetone was dissolved in pure water and was administered by gastrogavage 1 h before ethanol feeding each time. In the normal control and model control groups, only normal saline, instead of geranylgeranylacetone was administered.

Specimen collection: Observations were made of the reactivity, activity and death of rats in each group during the experiment. The animals were killed by cervical dislocation after administration of an overdose of sodium pentobarbital on the 4th weekend of the experiment. The abdomen was opeded immediately. The whole stomach was cut and removed 1.5 cm away from the cardia and the pylorus. Dissection was done along the greater curvature for general specimen observation. The obviously damaged gastric mucosa specimen was rinsed in cold saline solution. Then, the specimen was placed in formaldehyde and glutaraldehyde, and stored in liquid nitrogen solution for later observation. All operations of all specimens were assigned to the same experienced professional laboratory personnel. All animal studies were approved by the Animal Care and Use Committee of Zhejiang University in accordance with the Chinese guidelines for the care and use of laboratory animals.

Detection of the levels of serum nitric oxide, plasma endothelin-1, and gastric mucosal prostaglandin 2: We drawed 2 mL of blood from the abdominal aortic vein and injected it into the anticoagulant tube containing 30 μL 10% ethylenediaminetetraacetic acid disodium and 800 U aprotinin and mixed it well. We carried out centrifugal separation of the plasma at 4 °C at 3000 r/min for 30 min. Detection of plasma ET-1 levels and gastric mucosal PGE2 content was carried out by a radioimmunoassay method with strict attention to the instructions. Detection of serum NO levels was carried out by a chemiluminescence method (according to the Griess method).

All values are expressed as mean ± SE. The Tukey test or the Student’s t-test for unpaired results was used to evaluate differences between more than three groups or between two groups, respectively. Differences were considered to be significant for values of P < 0.05.

RESULTS
Observation of the general situation of rats 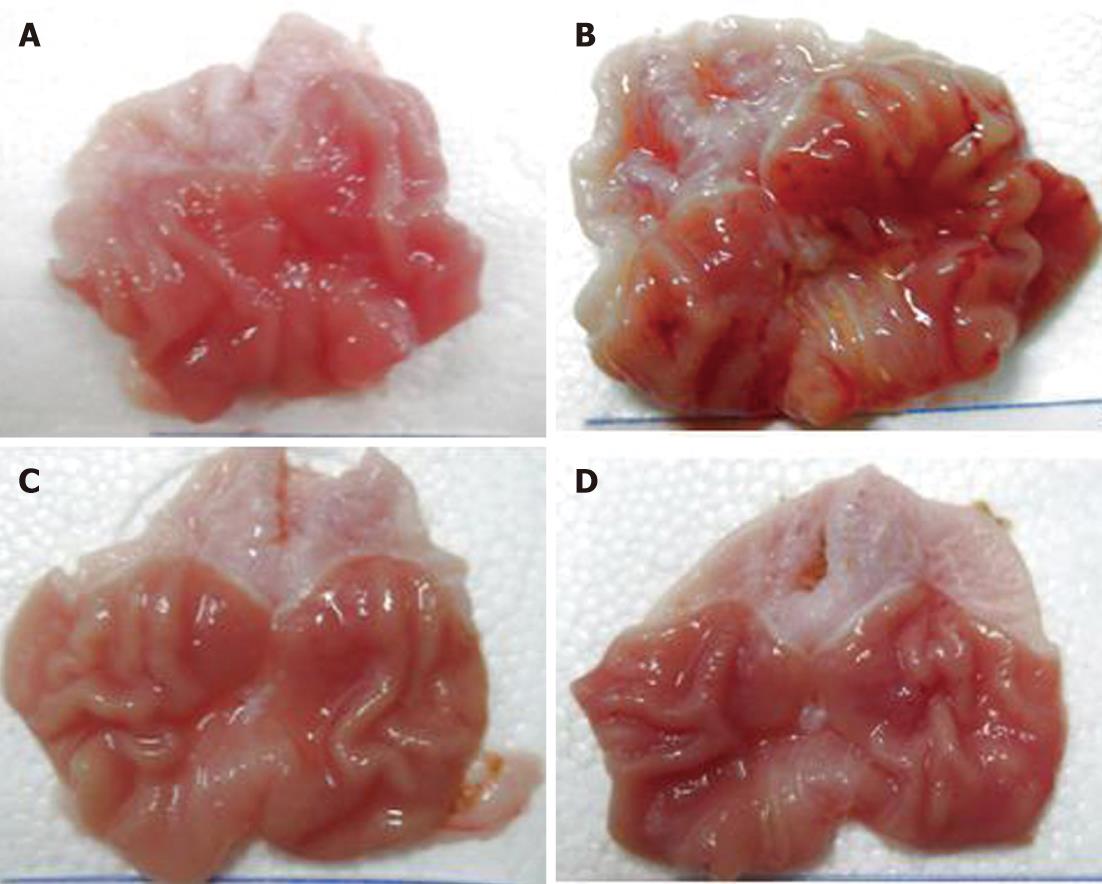 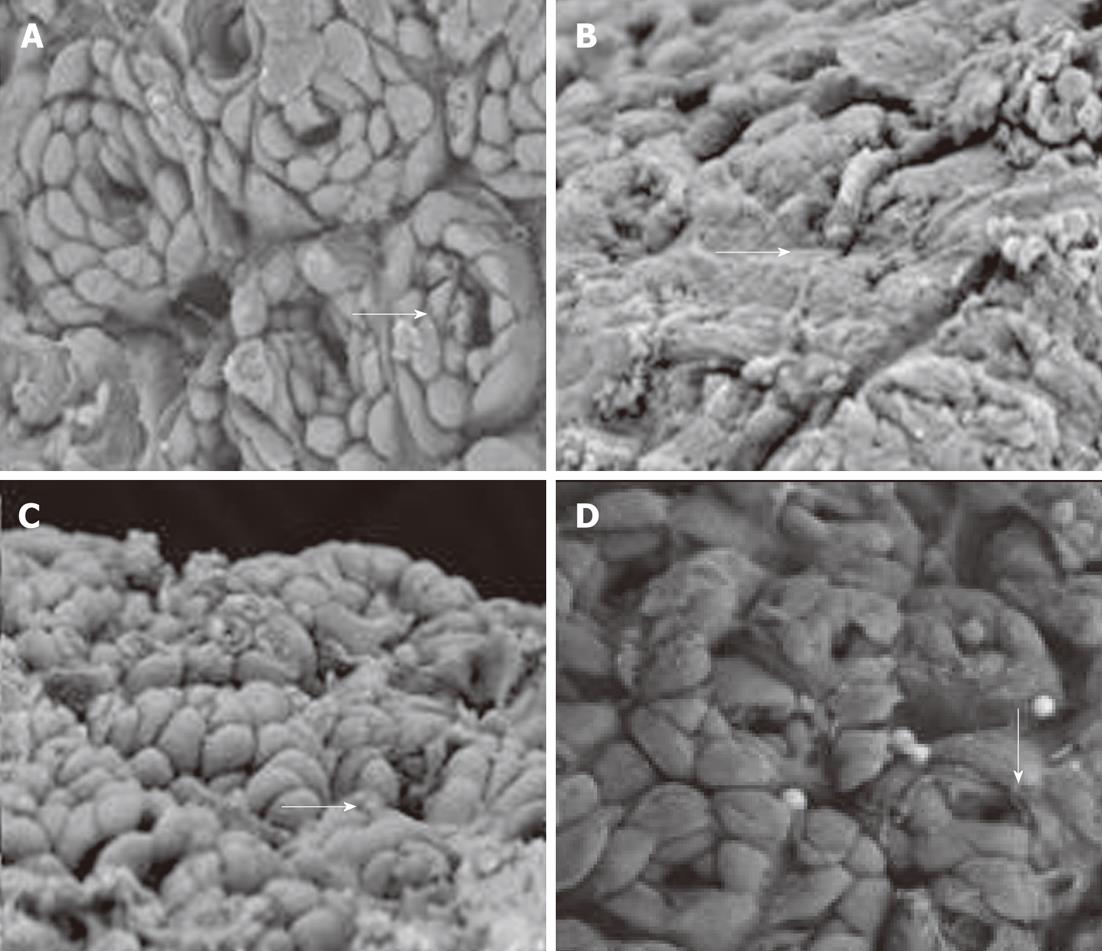 Ultrastructural changes under transmission electron microscopy: In the normal control group, the gastric mucosal organelles had integrated structures with no degeneration, and the microvillis were arranged in neat rows with no loss. The model control group showed widened cell gaps, vague intercellular junctions, sparse and deciduous microvillis, and swollen mitochondria and endoplasmic reticulum. In the model therapy groups, the cells were arranged in neat rows and the intercellular junctions were clear. The structures of the mitochondria and endoplasmic reticulum were clear with mild swelling (Figure 4). 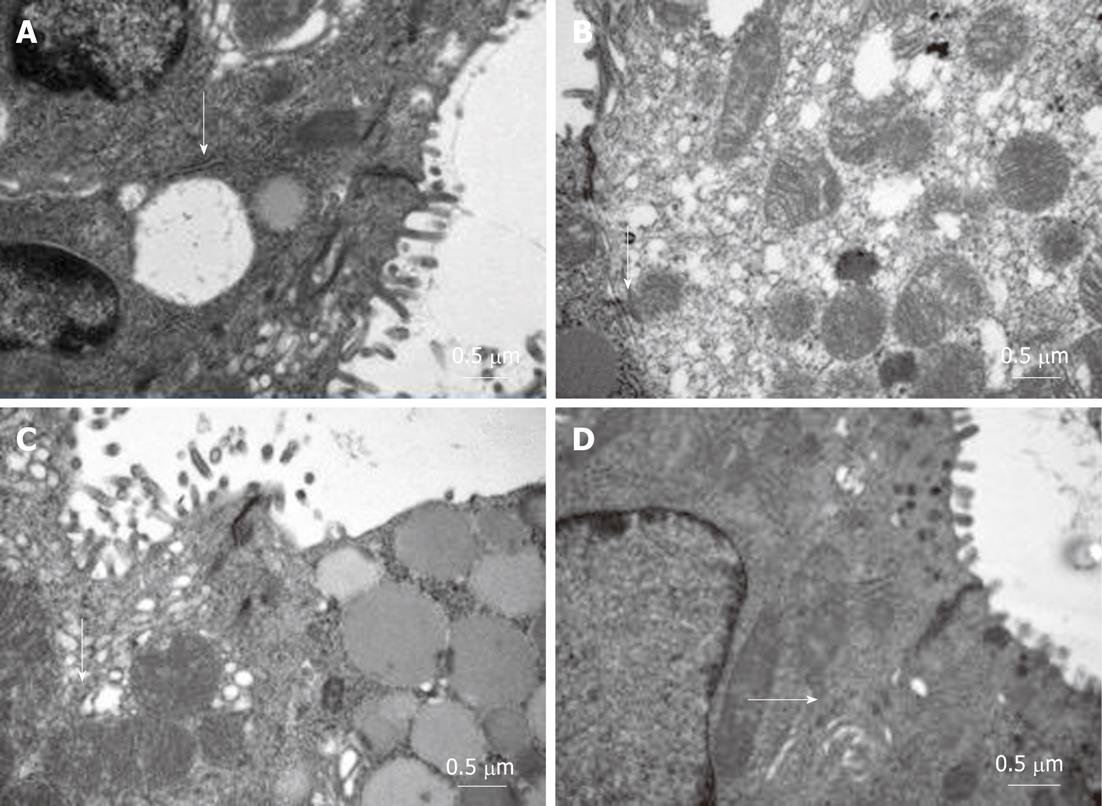 The integrity of the gastric mucosa depends on the protection of the gastric mucosal barrier (including, for example, the mucus-bicarbonate barrier and mucosal microcirculation) and can be damaged by a variety of factors (internal or external) with the production of a number of inflammatory mediators and cytokines, resulting in secondary mucosal damage[8-10]. Of the damaging factors, ethanol is an important external factor. With both hydrophobic alkyl and hydrophilic hydroxyl in its molecular stucture, ethanol can damage the gastric mucosal barrier defense system, diminish the capacity of the gastric mucosa to defend the invasion of gastric acid, bile and many digestive enzymes, causing mucosal edema, erosion, hemorrhage and necrosis. In this study, excessive ethanol intake can cause laboratory rats to become apathetic, lose appetites, have slow responses, and have increased mortality. In our study, damage of the gastric mucosa in the model control group, including the general view, microscopic structures and ultrastructure changes, was significantly serious compared to the normal control group.

Binge drinking or long-term drinking can cause acute or chronic gastric mucosal injury. Ethanol can be converted into acetaldehyde in the first-pass metabolism in the gastrointestinal tract, which may have a carcinogenic affect on the gastrointestinal tract through local toxic effects. Studies have shown that geranylgeranylacetone has a therapeutic effect on chronic gastritis, digestive ulcers and portal hypertensive gastropathy.

By establishing rat ethanol gastritis model, the authors evaluated the effects of ethanol on the gastric mucosa and studied the preventive effects of geranylgeranylacetone on ethanol-induced chronic gastritis.

There have been few studies on repair mechanisms for gastric mucosal damage caused by ethanol. Moreover, the effect and mechanisms of geranylgeranylacetone on repairing ethanol-induced gastritis have seldom been evaluated. This study demonstrated the administration of geranylgeranylacetone was correlated with a more favorable pattern of gastric mucosa damage after ethanol perfusion. The mechanism could be related to regulation of prostaglandin 2 (PGE2), endothelin-1 (ET-1) and nitric oxide (NO).

The study results suggest that geranylgeranylacetone can protect the rat gastric mucosa from ethanol-induced injury by changing the mobility of the cell membrane phospholipid bilayer, which further promotes the synthesis of endogenous PGE2 and NO, and inhibits the secretion of ET-1.

Geranylgeranylacetone is a derivative of terpenes, which has a therapeutic effect on chronic gastritis, digestive ulcers and portal hypertensive gastropathy. NO and PGE2 are recognized vasodilator factors in vivo, which can inhibit platelet aggregation and thrombosis, accelerate the flow of the gastric mucosal microcirculation, promote the secretion of bicarbonate, mediate the adaptive immune protective function and increase protein synthesis and cell renewal. ET-1 is the strongest vasoconstrictor in vivo.