Neoadjuvant platinum-based chemotherapy followed by surgery is the standard of care for patients with gastro-oesophageal adenocarcinoma[1,2]. However, there is an urgent need to develop predictive markers to individualize patient therapy[3]. We have recently shown that tumour regression grade (TRG) is a marker of histopathological response and tumour down-staging in tumours receiving neoadjuvant chemotherapy[4]. TRG was defined as per Mandard’s criteria[5]. TRG1 (complete regression) showed absence of residual cancer and fibrosis extending through the different layers of the oesophageal wall; TRG2 was characterised by the presence of rare residual cancer cells scattered through the fibrosis; TRG3 was characterised by an increase in the number of residual cancer cells but fibrosis predominated; TRG4 showed residual cancer outgrowing fibrosis; and TRG5 was characterised by the absence of regressive changes[5]. In patients who received neoadjuvant chemotherapy (CS group), 46.7% of gastric/gastro-oesophageal junction adenocarcinomas and 45.5% of lower third oesophageal adenocarcinomas had TRG 1, 2 or 3 compared to 13.7% in patients who did not receive neoadjuvant chemotherapy but proceeded to primary surgery. In the CS group, responders (TRG 1, 2 or 3) showed significant tumour down-staging [early ypT-stage disease (P = 0.002)]. In gastric cancers specifically, additional associations were seen with negative nodal disease (P = 0.044) and absence of vascular invasion (P = 0.027)[4]. More recently, we have also demonstrated that favourable tumour regression predicts better clinical outcomes in patients receiving neoadjuvant chemotherapy in gastro-oesophageal adenocarcinomas[6].

The anticancer activity of chemotherapeutic agents is directly related to the induction of apoptosis in tumours. Whilst the apoptotic pathway is complex, the intrinsic mitochondrial pathway is the predominant apoptotic pathway in cancer cells. In the intrinsic pathway, the mitochondrial release of cytochrome c activates caspase-9, which in turn activates caspase-3 and caspase-7[7,8]. Among the several cellular substrates of the capsases, members of the cytokeratin family, including cytokeratin-18 (CK-18), contribute to cellular collapse and apoptosis. Caspase-cleaved CK-18 is a specific marker of epithelial cell death and correlates with apoptosis in gastrointestinal epithelial cancers[9-11].

We identified patients referred to our centre with resectable gastric, gastro-oesophageal junction (GOJ) and lower third oesophageal adenocarcinomas between January 2001 and May 2008. GOJ tumours were defined as per Siewert’s classification[12]. The Union for International Cancer Control TNM staging system for oesophageal and gastric cancer was used in this study. The study was approved by the Ethics Committee of Nottingham University Hospitals.

A standard streptavidin-biotin complex technique was used. In brief, 5 μm TMA sections were deparaffinised with xylene and rehydrated through graded alcohol. Endogenous peroxidase was blocked with 0.3% hydrogen peroxide in methanol for 20 min. Antigen retrieval was carried out by microwave treatment of the slides in sodium citrate buffer (pH 6) for 10 min at 750 W followed by 10 min at 300 W. The slides were rinsed in phosphate buffer saline (PBS) and incubated with Vectastain blocking serum diluted in PBS to block non-specific absorption. The slides were incubated for 30 min with the primary antibody M30 to detect caspase-cleaved CK-18 (Peviva, Bromma, Sweden) at a dilution of 1:75 and primary antibody M6 to detect full length CK-18 (Peviva, Bromma, Sweden) at a dilution of 1:150 at room temperature. After washing with PBS, sections were incubated with secondary antibody (Vectastain) for 30 min followed by avidin-biotin complex for a further 30 min. 3-3’ Diaminobenzidine tetrahydochloride was used as a chromogen. All sections were counterstained with Gill’s haematoxylin, dehydrated and mounted using DPX (a mixture of disterene, plasticizer, and xylene; Sigma).

Evaluation of staining was performed with the observer blinded to the corresponding clinicopathological data. For full length CK-18 expression, cytoplasmic expression in cancer cells was considered positive. For caspase-cleaved CK-18 expression, TMA cores from tumour showing any positively stained apoptotic cells were considered positive. Caspase-cleaved CK-18 positive apoptotic cells were counted in TMA cores and the total number of positive cells from each tumour was taken as the number of positive cells.

All statistical analyses were carried out using SPSS package (version 15 for Windows, SPSS, Inc.). Associations between categorical variables were examined using cross-tabulation and the Pearson χ2 test. Kaplan Meier curves were derived to assess disease-specific survival, and the significance of differences in disease-specific survival between groups was calculated using the log-rank test. Patients whose death related to their oesophago-gastric cancer were considered in the disease-specific survival calculations. This was determined by death certification entries. Deaths resulting from non-oesophago-gastric cancer-related causes were censored. Survival rates were calculated from the date of diagnosis until the 13th January 2009, when any remaining survivors were censored and Kaplan Meier curves were plotted. In all cases, P < 0.05 was considered statistically significant.

All 122 tumours in the primary surgery group were available for CK-18 analyses. One hundred and thirteen tumours stained positive for CK-18 (92.6%) (Figure 1A) and 9 cores were negative for CK-18 expression. There was no statistically significant correlation between tumour differentiation, T stage, N stage, vascular/perineural invasion, resection margin involvement and full length CK-18 expression in tumours.

All tumours were suitable for caspase-cleaved CK-18 expression analyses (Figure 1B). In tumours previously exposed to neoadjuvant chemotherapy (neoadjuvant TMA, n = 97), 56.7% of tumours (55/97) were positive compared to 24.6% (30/122) of tumours not previously exposed to neoadjuvant chemotherapy (primary TMA). This was statistically significant (P = 0.009). The mean total number of caspase-cleaved CK-18 positive cancer cells per tumour was 4.16 in the neoadjuvant group (range: 1-92) compared to 2.7 in the primary surgery group (range: 1-51).

We have previously demonstrated that TRG as assessed using Mandard’s criteria is a useful tool to assess response to neoadjuvant chemotherapy in gastro-oesophageal adenocarcinomas; favourable TRG correlated with tumour down-staging in that study[4]. In the current study we evaluated whether caspase-cleaved CK-18 expression correlated with TRG. We found that 43.6% of tumours that were positive for caspase-cleaved CK18 also had a favourable tumour response (TRG 1-3) compared to 23.8% that were negative for caspase-cleaved CK-18 expression (Table 2). This was statistically significant (P = 0.043). There was no statistically significant correlation between tumour differentiation, T stage, N stage, vascular/perineural invasion, resection margin involvement and caspase-cleaved CK-18 positivity.

Clinicopathological correlations were also observed in tumours not exposed to neoadjuvant chemotherapy. Well-differentiated tumours were more likely to be caspase-cleaved CK-18 positive (62.5%) compared to poor- and moderately-differentiated tumours which were only positive in 23.6% and 19% of tumours respectively (P = 0.031). However, no differences between T, N stage, vascular/perineural invasion, resection margin involvement and caspase-cleaved CK-18 positivity were observed. Regarding patients who had not received neoadjuvant chemotherapy, Kaplan Meier plot showed that in patients whose tumours stained positive for caspase-cleaved CK-18, a longer disease-specific survival was observed compared to patients whose tumours were negative (mean 84 mo vs 51 mo, P = 0.003) (Figure 2). However, in patients who had received neoadjuvant chemotherapy, no statistically significant differences were observed (mean 37.3 mo vs 41.6 mo, P = 0.975) (Figure 2). 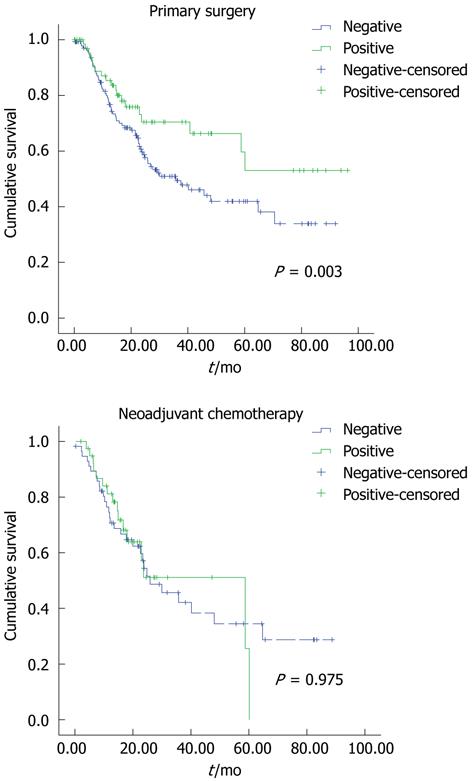 Those factors found to be significant in univariate analyses were also included in a multivariate logistic regression analysis to estimate the independent effect of each factor after adjusting for the contributions of other factors. There was no one factor in the cohort of patients studied that showed significance on multivariate analysis (Table 3).

The ability to predict response to chemotherapy and individualize patient treatment is a high priority in gastro-oesophageal adenocarcinomas. Whilst the role of multimodality therapy in improving patient outcomes is well established, these treatments are toxic and have a considerable impact on patient morbidity. In the United Kingdom, neoadjuvant chemotherapy followed by surgery is routinely offered to patients who are fit with no significant co-morbidities. Accordingly, these patients generally tend to be young and can tolerate toxic chemotherapy. Patients considered not suitable for chemotherapy are usually elderly with significant co-morbidities. Moreover, until 2006 in the United Kingdom, the standard treatment for patients with early stage gastro-oesophageal adenocarcinoma was surgery only and patients were not routinely offered adjuvant chemotherapy. With the publication of results from a large United Kingdom trial of perioperative chemotherapy[1], neoadjuvant chemotherapy was established as a standard treatment option for patients. This is reflected in the differences in mean age between the two groups in our study.

In the current study we have evaluated the potential role of full length CK-18 and caspase-cleaved CK-18 as biomarkers in gastro-oesophageal adenocarcinomas. To evaluate the prognostic significance of full length CK-18 in gastro-oesophageal adenocarcinomas, we first evaluated CK-18 expression in tumours not exposed to neoadjuvant chemotherapy (n = 122). We found that CK-18 was commonly expressed in tumours. This is consistent with a previously reported study[13]. Although Xu et al[13] demonstrated that CK18 mRNA expression correlated with lymph node metastasis and tumour differentiation in gastric cancer, we were unable to demonstrate any positive clinicopathological correlations in our study.

We also made interesting clinicopathological observations in tumours not exposed to chemotherapy. Caspase-cleaved CK18 expression correlated with better differentiation and improved survival in this group. Although the reason for this unexpected finding is not clear, whether host immune factors such as lymphocytic infiltration could contribute to cancer cell death is currently unknown and is an area of ongoing investigation.

Neoadjuvant chemotherapy followed by surgery is a standard treatment option in patients with early stage gastro-oesophageal adenocarcinomas. However, only 40% of patients respond to chemotherapy. There is an urgent need to develop predictive biomarkers.

Development of a serum biomarker test that can predict response to chemotherapy is highly desirable in gastro-oesophageal adenocarcinomas.

A prospective study of serial serum testing of caspase-cleaved CK-18 elevation and correlation with tumour response to chemotherapy is required to evaluate CK-18 as a promising predictive biomarker in early stage gastro-oesophageal adenocarcinomas.