AIM: To investigate the clinical significance of hepatic blood inflow occlusion without hemihepatic artery control (BIOwHAC) in the treatment of hepatocellular carcinoma (HCC).

RESULTS: There were no statistically significant differences (P > 0.05) in age, sex, pathological diagnosis, preoperative Child’s disease grade, hepatic function, and tumor size among the three groups. No intraoperative complications or deaths occurrred, and there were no significant intergroup differences (P > 0.05) in intraoperative bleeding, hepatic function change 3 and 7 d after operation, the incidence of complications, and length of hospital stay. BIOwHAC and Pringle maneuver required a significantly shorter operation time than HVO; the difference in the serum alanine aminotransferase or aspartate aminotransferase levels before and 1 d after operation was more significant in the BIOwHAC and HVO groups than in the Pringle maneuver group (P < 0.05).

Intraoperative bleeding occurs most frequently during hepatic resection. Bleeding-associated blood transfusions increase the postoperative complications and mortality rate[1], especially in cases complicated with hepatocirrhosis[2]. Therefore, control of intraoperative bleeding is a prerequisite for reducing the number of cases requiring blood transfusions during liver resection. The common approaches to reduce blood transfusion include lowering the intraoperative central venous pressure[3-5], and using cut-ultrasound aspiration and microwave thermocoagulation in liver surgery[6,7], and hepatic inflow occlusion with or without outflow control. Hepatic inflow control (with or without outflow control) plays an important role in constructing a bloodless surgical field. However, hepatic ischemia-reperfusion injury (HIRI) occurs in all hepatic vascular occlusions to some extent. The normal liver receives 70%-75% of its blood supply from the portal vein and 40%-60% of its oxygen supply from arterial blood. Considering the differences between the distribution and oxygen content of the blood in the portal vein and that in the hepatic artery, we performed hepatic blood inflow occlusion without hemihepatic artery control (BIOwHAC)[8] to minimize HIRI by a modified surgical procedure. During BIOwHAC, the proper hepatic artery was surgically exposed, after which its left and right branches were separated. For the right and left hemihepatic occlusions, catheters were advanced and bypassed the portal vein, bile duct, and the respective branches of the hepatic artery before being tightened.

We designed a retrospective case-control study to compare BIOwHAC, Pringle maneuver and hemihepatic vascular occlusion (HVO) in terms of operation time, intraoperative bleeding, and postoperative liver function, and postoperative complications. We also assessed the merits and demerits of these three approaches.

Between March 2005 and January 2009, 162 patients were treated at our hospital for liver neoplasms. Of these, 59 patients who met with the following criteria were included in this trial: availability of complete data, presence of pathologically diagnosed hepatocellular carcinoma (HCC), cancers confined to half of the liver and being suitable for hepatic portal anatomical vascular occlusion, and resectable tumors. Patients who underwent pericardial devascularization, splenectomy, gastroenterostomy and biliointestinal anastomosis were excluded.

Of the 59 patients, 20 underwent Pringle maneuver, 20 underwent HVO, and 19 underwent BIOwHAC. The patients in the Pringle maneuver group underwent the Pringle’s occlusion by the conventional method at the hepatoduodenal ligament using urethral catheters. Patients in the HVO group underwent vascular occlusions via two approaches. (1) The catheters were introduced into the confluence of the left and right hepatic ducts along the common hepatic duct without dissecting the hepatoduodenal ligament; the tangential clamp was placed at the superior hepatic capsule or inferior transverse fissura ligamenti teretis and then the internal liver parenchyma and the external Glisson sheath were bluntly separated with care; if no resistance occurred at that time, the urethral catheter was exited at the portal vein bifurcation-caudate lobe junction towards the posterior hepatoduodenal ligament and then insufflated to achieve right hemihepatic occlusion; one end of the catheter was inserted through the lesser omentum foramen to the hepatogastric ligament and insufflated to achieve left hemihepatic occlusion; and (2) The affected side of the hepatic artery and the portal vein were separated to occlude them simultaneously or individually. Patients in the BIOwHAC group underwent BIOwHAC as follows: the proper hepatic artery was surgically exposed and the left and right branches of the proper hepatic artery were separated; for right hemihepatic occlusion, the catheter bypassed the portal vein, bile duct, and the right hepatic artery and was tightened; for left hemihepatic occlusion, the catheter bypassed the portal vein, bile duct, and the left hepatic artery and was tightened (Figure 1). 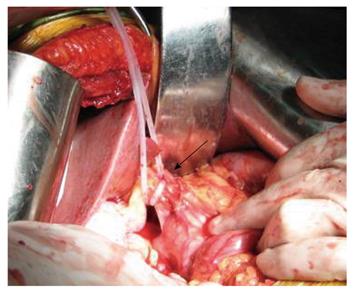 Complete background information, including age, sex, liver function, Child’s disease grade, level of serum markers of hepatitis, and α-fetoprotein levels was collected from all the patients.

Patients’ information on age, sex, preoperative Child’s disease grade, pathologic diagnosis, and preoperative hepatic function are listed in Table 1; and the information about tumor size and type of liver resection is shown in Table 2.

In all the patients, the procedures were performed without intraoperative complications and deaths. Each group underwent vascular occlusion only once, and there were no statistically significant intergroup differences (P > 0.05) in occlusion time, type of liver resection, bleeding and blood transfusions (Table 2). BIOwHAC and Pringle maneuver required significantly shorter operation time than HVO (151.84 ± 41.77 min and 158.50 ± 43.77 min, respectively vs 219.25 ± 58.09 min, P < 0.05), but the time required for BIOwHAC was almost equivalent to that for Pringle maneuver (P > 0.05). 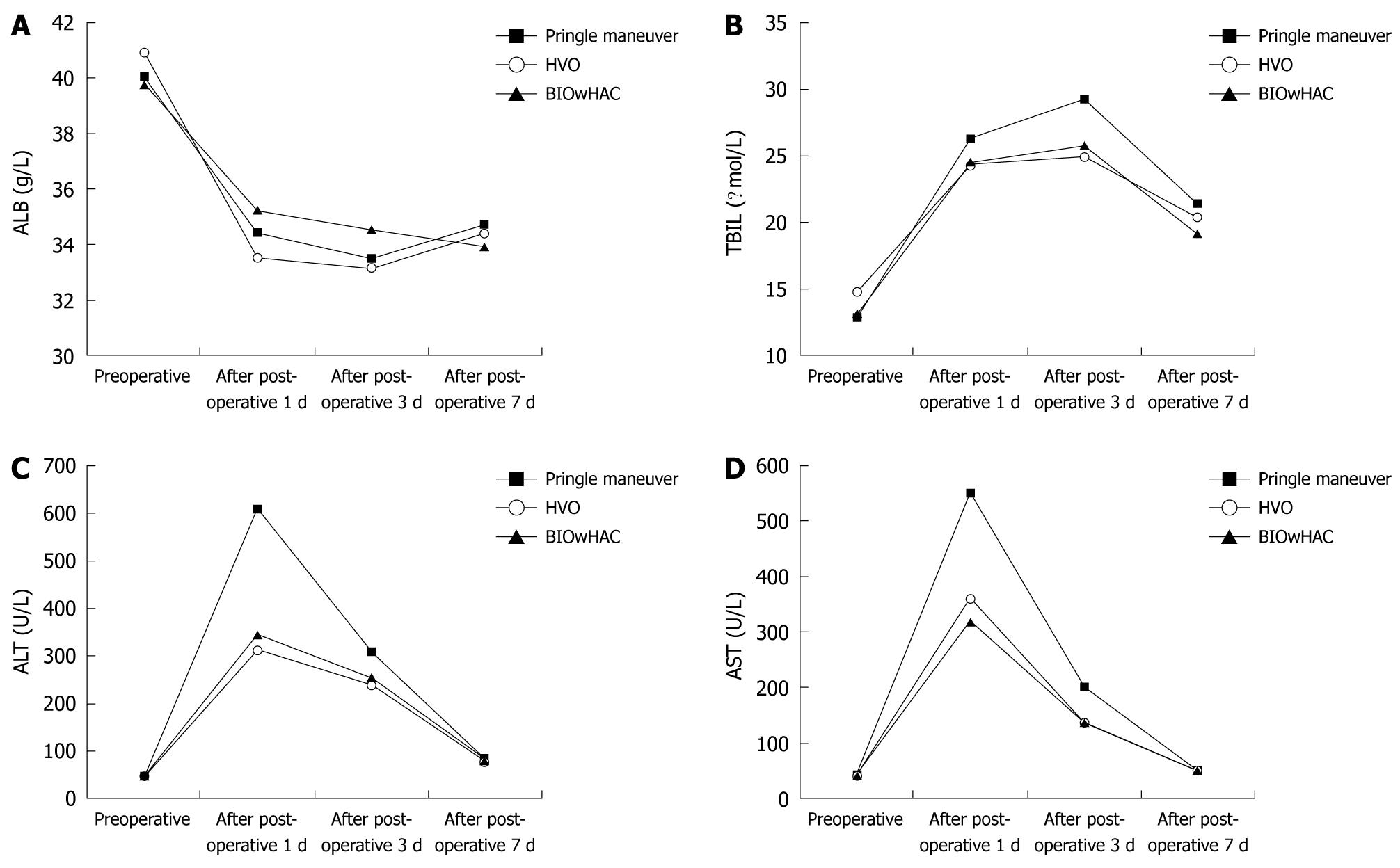 The most common postoperative complication in this study was pleural effusion with pulmonary infection, occurring in 4 cases (20%) of the Pringle maneuver group, 5 cases (25%) of the HVO group, and 4 cases (21.1%) of the BIOwHAC group. No significant intergroup differences were noted in length of hospital stay among the three groups (Table 3).

Owing to the recent improvement in the liver resection technique intraoperative hepatic vascular occlusion and perioperative management, surgical complications and mortality rate have been considerably reduced[8-10]. Pringle maneuver is the commonly used method for hepatic vascular occlusion, which enables effective control of bleeding. Multiple approaches for hepatic vascular occlusions have been developed; however the Pringle maneuver is more popular because it can be used in various types of liver resection[11,12]. Man et al[13] reported that the Pringle maneuver is superior to non-vascular occlusion, but can lead to obvious HIRI and is time consuming, especially in cases complicated with liver cirrhosis[14]. In 1987, Makuuchi performed HVOs through portal venous branch occlusion and hepatic arterial branch occlusion[15]. HVO helps conserve the contralateral hepatic vascular inflow and facilitates the hepatic operation and mildly affects postoperative liver function in favor of patients with liver cancer and hepatocirrhosis[15]. However, HVO must be performed by surgeons who are proficient in portal vein surgery so as to avoid incident damage to the interior conduit of the Glisson sheath, hemorrhage, and biliary fistula. If there are communicating branches between the non-occluded and the occluded hemilivers, hepatic bleeding may be quite severe[16].

Although no significant intergroup differences were observed in the changes of the serum AST and ALT levels 3 and 7 d after operation, patients in the HVO and BIOwHAC groups had significantly lower AST and ALT levels than those in the Pringle maneuver group 1 d after operation. This implies that HVO and BIOwHAC are superior to Pringle maneuver in minimizing the HIRI. In HVO, the vascular occlusion is continuous; but in the Pringle maneuver the circulation is maintained with occlusion for 15-20 min and reperfusion for 5 min, this interrupted occlusion gives rise to several problems[3]. In our study, the patients underwent only a single vascular occlusion, which is the reason why no significant intergroup differences were seen in intraoperative bleeding and in the number of cases requiring blood transfusions.

In humans, the confluence of the left and right hepatic ducts lies superiorly, the portal bifurcation is inferior to this bifurcation, and below is the proper hepatic arterial bifurcation. Therefore, it is convenient and safe to intraoperatively expose the proper hepatic artery and separate its left and right branches. Thus, surgeons can occlude the portal vein, bile duct, and occlusive-side artery branch in a single operation. BIOwHAC is convenient and safe as compared to Pringle maneuver. Our results showed that HVO required significantly longer operation time than BIOwHAC and Pringle maneuver (219.25 ± 58.09 min vs 151.84 ± 41.77 min and 158.50 ± 43.77 min) due to the net operation of vascular occlusion for 20-30 min. In addition, resection of the cholecyst is required in the right HVO, but not in BIOwHAC, which can satisfy the wish of the patients who want to conserve the cholecyst.

In the normal liver, 70%-75% of blood supply comes from the portal vein and 40%-60% of oxygen supply from arterial blood. Portal vein can not supply all parts of the liver with oxygen, and when the portal vein is completely occluded, the level of oxygen consumption in the liver remains the same as that before occlusion. This indicates that the hepatic artery alone is sufficient to meet the oxygen demand of the liver[17]. Our results showed that the patients in the BIOwHAC group had significantly lower serum AST and ALT levels than those in the Pringle maneuver group 1 d after operation, but no significant differences from that in the HVO group. This finding shows that hemihepatic artery conservation can provide enough oxygen to meet the demand of the intact hemiliver. In addition, no significant intergroup difference was noted in the postoperative serum albumin levels, which may be attributed to postoperative exogenous supplements.

Our results indicated no significant intergroup differences in the intraoperative bleeding and blood transfusion, liver function 3 and 7 d after operation, incidence of postoperative complications, and length of hospital stay. We recommend BIOwHAC because it is a convenient and safe technique similar to the Pringle maneuver and can protect the liver function injury as effectively as HVO.

In conclusion, among the various kinds of approaches for hepatic vascular occlusion available currently, the most suitable one should be selected on the basis of comprehensive preoperative examinations (CT or MRI imaging and liver function tests), intraoperative examinations (pathological examination and lesion location), examinations for invasion in the hepatic vein and inferior vena cava, cardiovascular status, as well as the experience and skill of surgeons and anesthesiologists.

Based on the differences between the distribution and oxygen content of the blood in the portal vein and that in the hepatic artery, hepatic blood inflow occlusion without hemihepatic artery control (BIOwHAC) was performed in this study.

BIOwHAC is convenient and safe similar to Pringle maneuver; this technique causes as slight hepatic ischemia reperfusion injury as HVO.

BIOwHAC: the proper hepatic artery was surgically exposed, after which its left and right branches were separated. For the right and left hemihepatic occlusions, catheters were advanced and bypassed the portal vein, bile duct, and the respective branches of the hepatic artery before being tightened.

This is a retrospective analysis on a single center series of different methods of inflow hepatic occlusion during liver resection for liver cancer. The study is well written and the methodology is correct.