AIM: To analyze the impact of the GNAS1 T393C polymorphism on prognosis and histopathology of gastric cancer.

METHODS: Genomic DNA was extracted from paraffin-embedded tissues of 122 patients with primary gastric carcinoma and from the blood of 820 healthy white individuals. Allelic discrimination was performed by quantitative real-time polymerase chain reaction. Genotyping was correlated with histopathologic parameters and with overall survival according to the Kaplan-Meier approach and with multivariate analysis by multiple stepwise regression.

Gastric cancer has substantially decreased in incidence over the past decades, but it still remains one of the most common cancers in the world and the second most frequent cause of cancer-related death after lung cancer[1]. Most patients are diagnosed with advanced gastric cancer, and overall survival remains poor[2,3]. The 5-year survival rate for gastric cancer is still only at 40%[4,5].

Of particular interest are prognostic factors, as they give the basis to identify gastric cancer patients with high-risk and poor prognosis. The identification of patients with poor outcome can help to set up novel treatment strategies at the beginning of treatment and may lead to better and more individualized therapy strategies with better survival[2]. Current efforts in research are therefore focused on the detection and validation of biomarkers and genetic markers that give additional information about prognosis to classical prognostic factors such as the TNM classification. The majority of new detected markers are related to properties of the tumor itself, e.g. somatic mutations or differential expression of genes or proteins. However, difficulties in standardization of such markers often prevent their routine application in clinical practice[6].

In recent years, studies have focused on the detection of single nucleotide polymorphisms (SNPs) that have a prognostic impact in cancer. One major advantage of SNPs as prognostic markers is that they can be determined independently from the availability and quality of tumor material as they can be easily evaluated from a blood sample from individual patients.

The T393C polymorphism of the gene GNAS1 is one such polymorphism. This SNP is located in exon 5 of the gene GNAS1, which encodes the ubiquitously expressed Gαs subunit of heterotrimeric G proteins. Previous studies indicate that increased expression of Gαs enhances apoptosis[7,8] and that Gαs mRNA expression is different between T393C genotypes[9]. For various solid tumors, previous studies demonstrated that patient survival and tumor progression depended on T393C genotype[10-17].

Of 159 patients, who were treated surgically between May 1996 and January 2005 for primary gastric carcinoma at the Department of General, Visceral and Cancer Surgery of the University of Cologne, 13 (8.2%) patients with a second tumor, a previous operation of the upper digestive tract or missing paraffin-embedded tissue from normal cells, and 24 (15.1%) patients with neoadjuvant treatment received before surgery were excluded. Excluded patients did not differ in age and gender from the remaining patients.

All of the included 122 patients [median age 67.6 years, range 33-87 years; 78 (63.9%) male, 44 (36.1%) female] were initially treated by operation with curative intention. Gastroscopic examination, endoscopic ultrasound and computed tomography (CT) of the chest and abdomen were performed before surgery on all patients for clinical staging.

The present study was performed according to the guidelines of the local Research Ethics Commission. 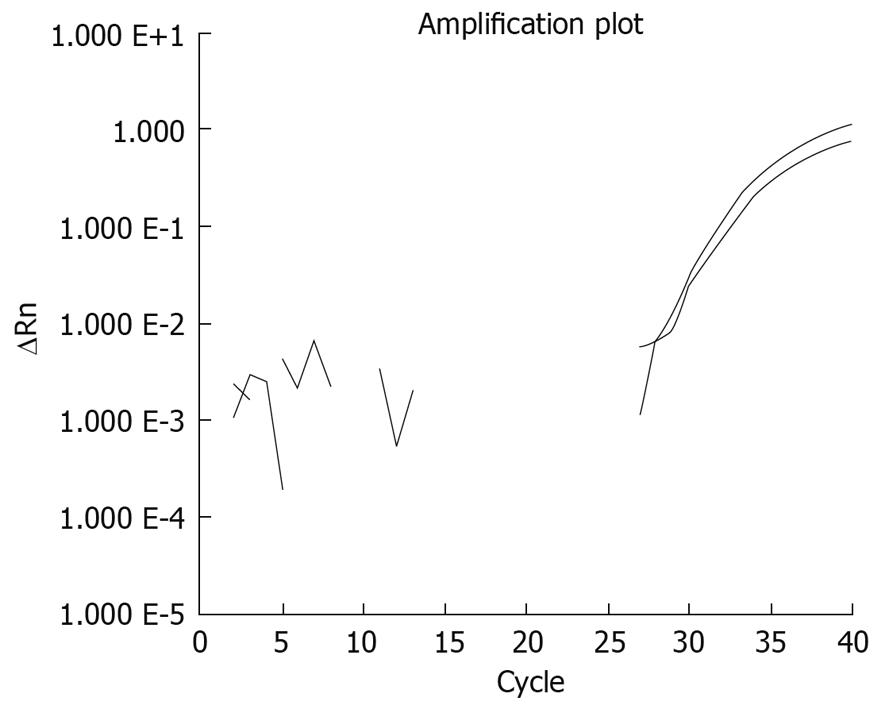 The Caucasian control sample consisted of 820 healthy white individuals who were recruited at the local Department for Transfusion Medicine, University Hospital, Essen. All samples were collected at random from subjects donating blood. The details of this sample have been published previously[12].

Associations between T393C genotype and clinicopathological parameters were evaluated using the χ2 test. Pearson’s χ2 was used for Hardy-Weinberg analysis and to examine differences in allele frequencies between our patient group and the reference group. Relations to overall survival were evaluated with univariate analysis according to the Kaplan-Meier approach using the log-rank test to assess statistical differences between groups. Prognostic factors were determined by multiple stepwise regression analysis using the Cox model. Only potential prognostic factors were included in the multivariate analysis. The level of significance was set at P < 0.05 and P values were for 2-sided testing. All statistical tests were performed using the Software Package SPSS for Windows, Version 17.0 (Chicago, IL, USA).

Thirty-nine (32.0%) patients displayed a CC genotype, 57 (46.7%) a CT genotype and 26 (21.3%) a TT genotype. The frequency of the C allele (fC) in the entire patient group was 0.55, which is not significantly different from that of healthy blood donors (Table 1). The distribution was compatible with the Hardy-Weinberg equilibrium. 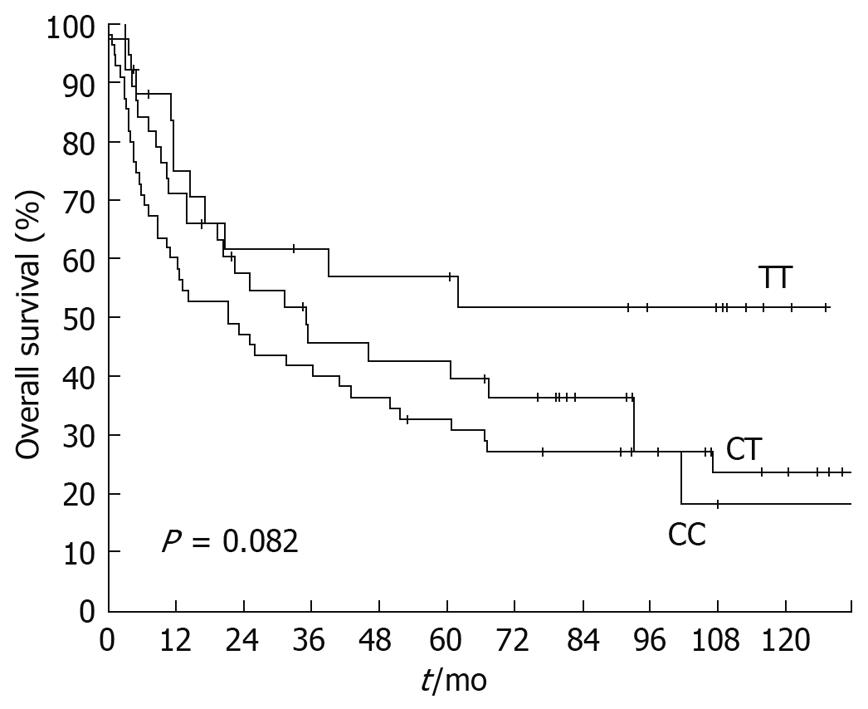 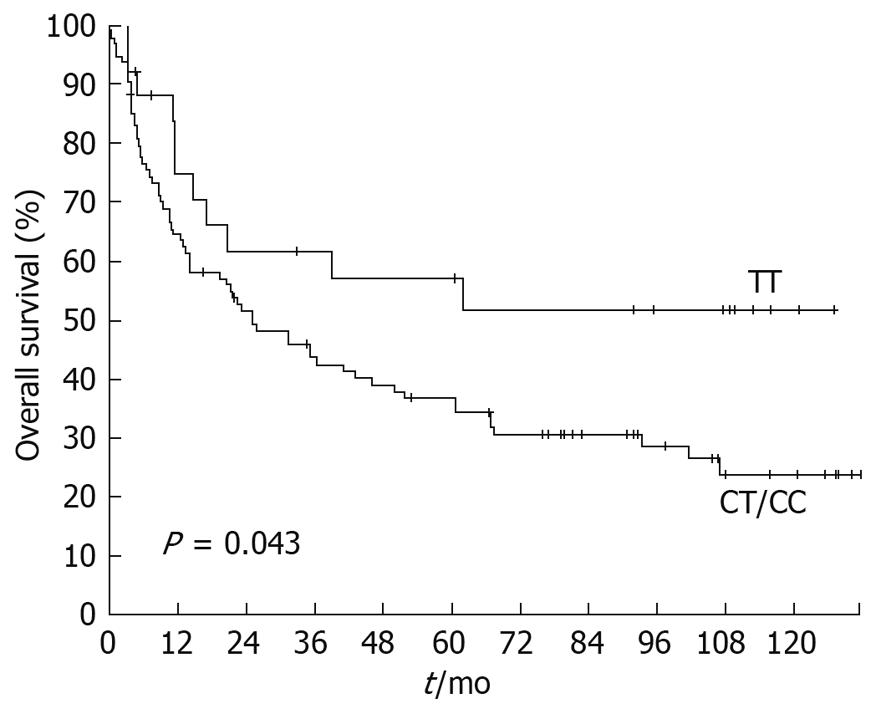 Gastric cancer is the fourth most common cancer with approximately 800 000 new cases per year and the second leading cause of cancer-related death worldwide[20]. Many patients have advanced disease at the time of diagnosis, resulting in poor prognosis and high mortality[2,21,22]. Pretreatment staging of the disease is of high importance as it provides the basis for selecting the most appropriate therapeutic strategy[23]. Based on the preoperative staging, patients with early stage tumors are treated by endoscopic mucosal resection, while patients with advanced tumors are treated by partial or total gastrectomy[5]. Accurate staging is also the basis for selecting patients for neoadjuvant, adjuvant or palliative treatment[24]. By identifying patients with poor outcome, novel treatment strategies could be set up at the beginning of treatment which can lead to better and more individualized therapy strategies with superior survival[2].

The present study demonstrated that besides the known prognostic factors pT, pM, pN and R-category, the T393C polymorphism was also a significant prognostic factor in the univariate analysis with a survival benefit for homozygous TT patients. In addition, it demonstrated that compared to C allele carriers, homozygous TT patients were diagnosed with significantly less advanced tumor stages according to UICC, which is possibly the main reason why the T393C genotype lost its independence in the multivariate analysis.

The gene GNAS1 is mapped to chromosome 20q13 and consists of 13 exons. Somatic activating mutations of GNAS1 have been implicated in the etiology of McCune Albright Syndrome[25] and sporadic, isolated endocrine tumors[26,27] which supports a role of GNAS1 in tumor initiation and progression.

In contrast to our findings in gastric cancer and previous findings in the above-mentioned tumor types, an unfavourable clinical course for T allele carriers has been described in studies of invasive breast cancer and intrahepatic cholangiocarcinoma, suggesting that the biological effect of the T393C polymorphism may be different in different tumor types. In a recent study, we demonstrated that this polymorphism is a predictive molecular marker for tumor response to cisplatin/5-FU-based radiochemotherapy in esophageal cancer, with CC genotypes mostly showing a major response[28].

In vitro experiments suggest that expression of Gαs is associated with enhanced apoptosis[7,8]. The second messenger, cyclic AMP, which is generated by activated Gαs, seems to play a major role in this proapoptotic process. An increased concentration of the intracellular second messenger, cyclic AMP promotes apoptosis in several cell types including leukemic cells[29], ovarian cancer cells[30], and lymphoma cells[25]. Increased Gαs expression in tissues of patients with TT genotypes may therefore confer enhanced apoptosis in 393T allele carriers. Hypothetically, this mechanism may contribute to the described more favorable clinical course and the less advanced tumor stages of homozygous TT patients. This hypothesis remains to be supported by additional functional studies which were beyond the scope of the present study. The T393C polymorphism as a risk factor for gastric cancer could not be established in the present study.

In conclusion, this study demonstrated for the first time that in primary gastric cancer, homozygous GNAS1 393T patients have less advanced tumor stages and higher survival rates than C allele carriers. These findings further support the concept of a general role for the GNAS1 T393C polymorphism in tumor progression.

Identification of gastric cancer patients with poor outcome can help to set up novel treatment strategies at the beginning of treatment and may lead to better and more individualized therapy strategies with better survival. In recent years, studies have focused on the detection of single nucleotide polymorphisms (SNPs) as prognostic molecular markers in cancer.

For various solid tumors, previous studies have demonstrated that patient survival and tumor progression depend on the GNAS1 T393C genotype. In the present study, the authors have described for the first time that the GNAS1 T393C polymorphism affects tumor stage and prognosis in gastric cancer.

The GNAS1 T393C polymorphism will contribute to identifying high-risk patients with gastric cancer and might help to establish a more individualized treatment strategy for gastric cancer.

A single-nucleotide polymorphism (SNP) is a DNA sequence variation occurring when a single nucleotide - A, T, C, or G - in the genome differs between members of a species. The GNAS1 T393C is located in exon 5 of the gene GNAS1. For several cancer types, studies have demonstrated that patient survival is affected by this SNP.