AIM: To evaluate the anti-viral effect of emodin plus Astragalus polysaccharide (APS) in hepatitis B virus (HBV) transgenic mice.

CONCLUSION: Emodin and APS have a weak but persistent inhibitory effect on HBV replication in vivo, which may function as a supplementary modality in the treatment of hepatitis B infection.

Hepatitis B is a global health problem, and affects about 400 million people worldwide, particularly in Asian and Western Pacific countries[1]. It is the leading cause of cirrhosis and liver cancer in China[2]. The current treatment strategy for hepatitis B is to eradicate replication and infection of hepatitis B virus (HBV) in vivo using anti-virus drugs such as interferon and nucleoside analogs such as lamivudine[3]. However, because of their side effects, low antiviral potency, and long treatment period, the actual effects of these treatments are neither ideal nor adequate[4].

Chinese herbal medicine has been used for chronic liver diseases for thousands of years in China, and their efficacy has been confirmed by modern biological technology in recent years[5,6]. Emodin (1,3,8-tri-hydroxy-6-methylanthraquinone) is an active component of herbal medicine derived from the genera Rheum, Polygonum, Rhamnus and Senna[7]. Our previous study showed that emodin could inhibit the replication of HBV in human hepatoma cells in vitro[8], suggesting its potential antiviral effect in hepatitis B treatment. Astragalus polysaccharide (APS) is a bioactive chemical in Astragalus membranaceus (AM) which has been used in medicine for centuries in China and is believed to exhibit immune-stimulatory, anti-viral, anti-oxidation and anti-tumor effects[9-12]. A previous study performed in vivo has shown that Astragalus-Polygonum Anti-Fibrosis Decoction, in which APS is one of the main components, significantly inhibited liver fibrosis induced by hepatitis B and suppressed hepatic inflammation[13], illustrating that APS may be helpful in eradicating HBV replication in vivo.

In this study, we investigated the antiviral effects of emodin and APS in HBV transgenic mice and found that the combination of emodin and ASP suppressed HBV replication in HBV transgenic mice. Although lamivudine had a stronger direct inhibitory effect on HBV replication, emodin and APS showed no HBV recurrence 7 d after the last treatment, suggesting a long-lasting effect and may prove to be a potential therapeutic modality for hepatitis B infections.

The weight of each animal was measured just before the first drug administration and after sacrifice. The alteration in animal weight was calculated from these two values.

Hepatic tissues were fixed using 4% paraformaldehyde phosphate-buffered saline (PBS, pH 7.4) and embedded in paraffin wax. After deparaffinization, 5 μm sections were stained with hematoxylin and eosin (HE), and liver condition was classified according to the standard formulae published by the China Medical Association in 1995.

Blood was collected via the abdominal aorta after the mice were sacrificed. After centrifugation at 8000 r/min for 5 min, the serum was separated and stored at -20°C. HBV DNA content in serum was determined using real-time PCR (PG Biotech Co, Shenzhen, China) according to the manufacturer’s instructions.

Data are presented as mean ± SE. Data was checked for normal distribution and equal variance. One-way ANOVA test analysis was carried out by SPSS 11.0 software. Differences were considered significant at P values of less than 0.05.

One mouse in group A died due to improper blood collection during the experiment at the third week. The other mice in all three groups were healthy during the experiments and their behaviour was normal. There was no significant weight alteration in the mice before or after the experiments. However, an increase in weight was observed in group C when compared with group B after 28 d of experimentation (Figure 1).

Figure 1 Animal weight alteration before and after the experiment. The weight of each mouse was determined before drug administration and before sacrifice after 28 d of experimentation, respectively. One-way ANOVA analysis indicated that there was no significant weight change between day 0 and day 28 in all three groups. However, increased weight was observed in group C compared with group B after 28 d of experimentation. Group A: Normal control; Group B: Lamivudine; Group C: Emodin and Astragalus polysaccharides.
Histological examination

At the end of the experiment, there was no significant difference in the macro-appearance of the livers from mice in the three groups. The livers were pink, soft and their borders were even. Morphologically, the liver structure was intact, with few necrotic hepatocytes, limited inflammatory cell infiltration and fibrous tissue formation (Figure 2).

Figure 2 HE staining of liver tissue from different groups (Original magnification, × 200). A: Normal control; B: Lamivudine; C: Emodin and Astragalus polysaccharides.
HBV DNA content in serum was reduced by lamivudine, emodin and APS 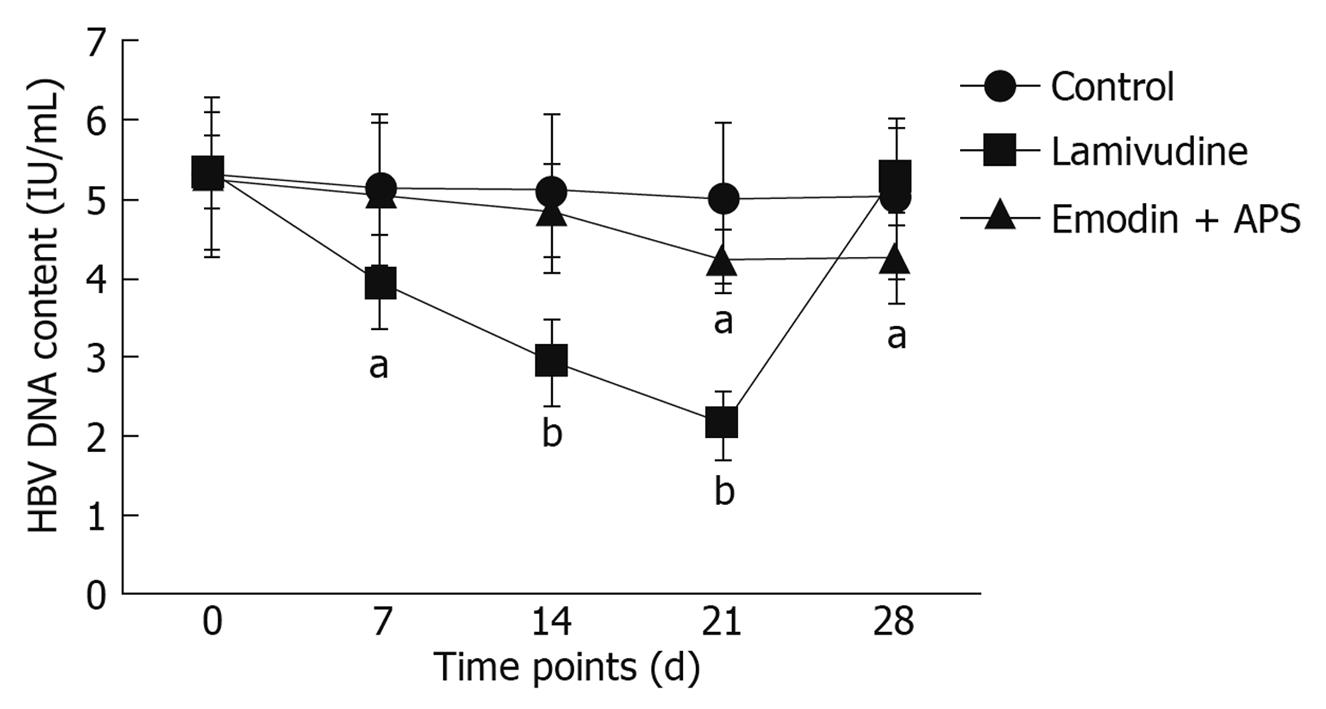 Figure 3 Hepatitis B virus (HBV) DNA levels in serum. Mice were sacrificed at day 28 of the experiment. Blood was collected, serum was separated, and HBV DNA content was investigated using real-time PCR. Lower HBV DNA contents were observed in the lamivudine group except on day 28 of the experiment. Emodin + APS decreased serum HBV DNA content at day 21 and 28. Data was presented as mean ± SE (n = 19). aP < 0.05, bP < 0.01 vs the control group at the same time point.
Lamivudine and emodin + APS reduced HBsAg and HBeAg levels in serum 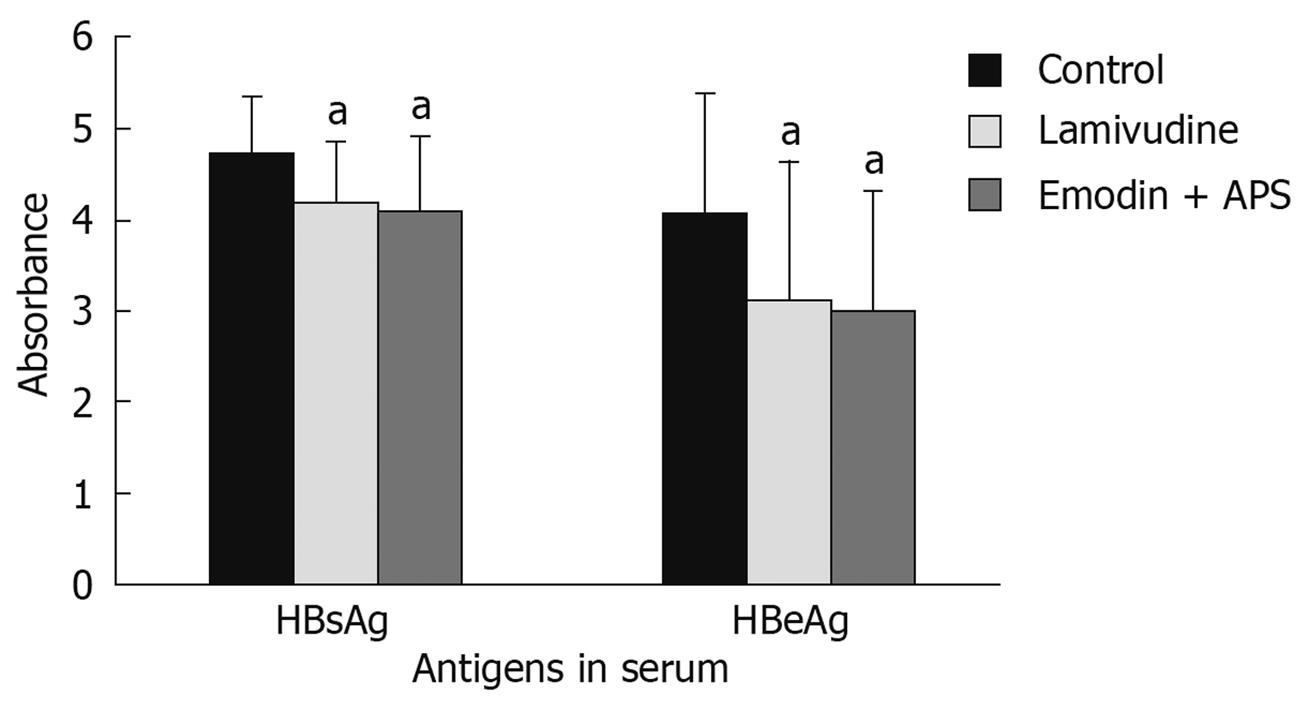 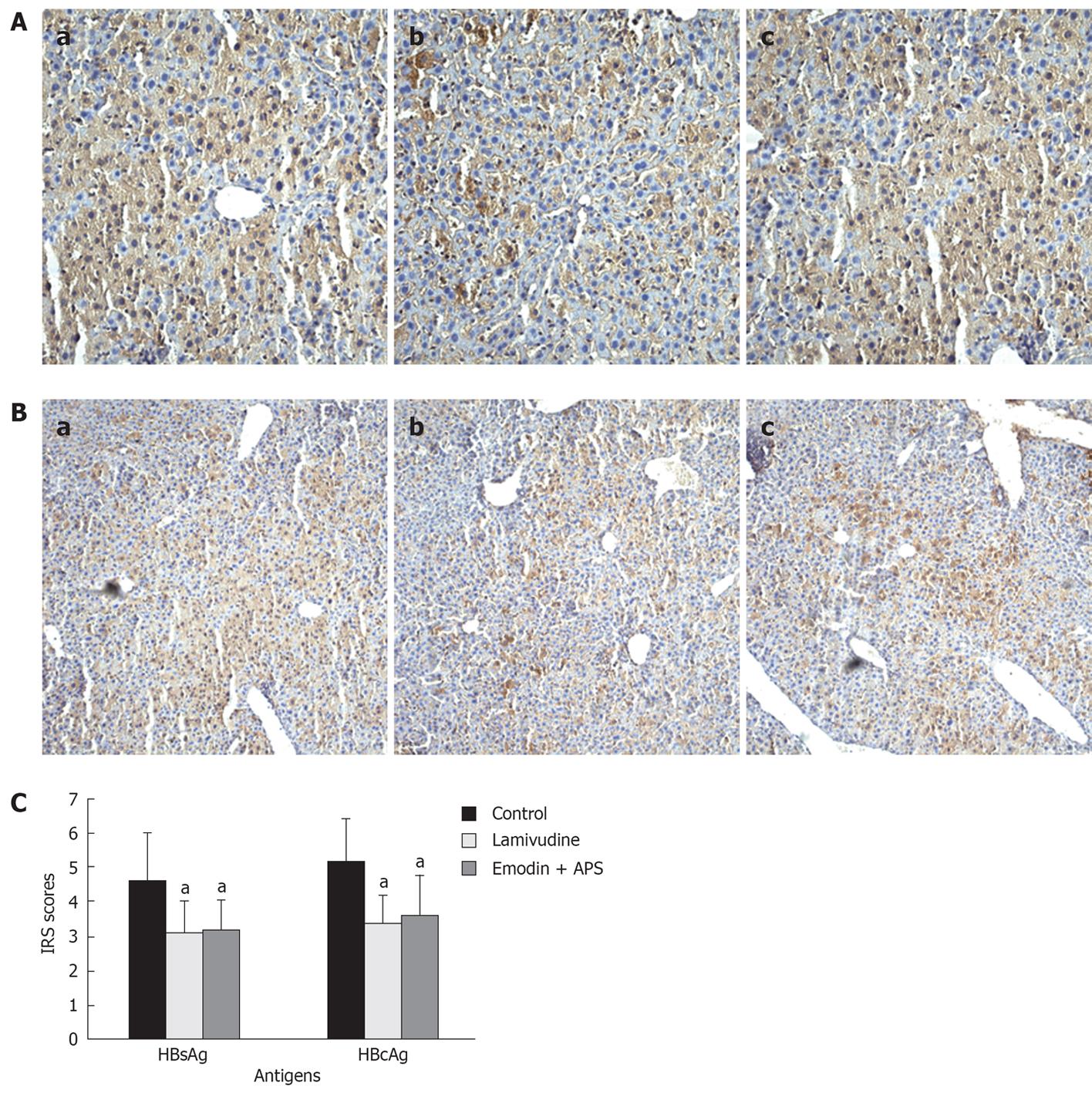 Figure 5 HBsAg and HBcAg expression in hepatocytes (original magnification, × 200). Positive staining of HBsAg and HBcAg was brown or dark brown, and mainly localised in the cytoplasm. A: HBsAg; B: HBcAg; a: Control group; b: Lamivudine group; c: Emodin and Astragalus polysaccharides group; C: The immunohistochemical reaction score (IRS) was calculated according to the formula IRS = positive staining scores × intensity scores. Lower HBsAg and HBcAg expression were observed in the lamivudine and emodin + APS groups. Data was presented as mean ± SE. aP < 0.05 vs the control group.
DISCUSSION

The transgenic mouse model used in this study was established by integration of HBV genome into mouse genome using a microinjection method, and it has been confirmed that HBV genes can be stably expressed, replicated and packaged in the mouse[15]. The present study showed that administration of lamivudine for 3 wk significantly reduced serum HBV DNA content. However, after ceasing administration for 1 wk, HBV DNA returned to the original level. Similar results were obtained following administration of lamivudine to hepatitis B patients, suggesting that this transgenic mouse model can mimic HBV infection in man.

HBV antigens including HBsAg, HBcAg and HBeAg are important markers for hepatitis B development in patients[16]. Our results indicate that emodin + APS significantly decreased the expression of these antigens in both serum and liver tissue and lamivudine had a stronger inhibitory effect. The mechanism of this inhibition is still largely unknown. Previous studies have shown that emodin can inhibit several different viruses such as herpes simplex virus (type I and II), parainfluenza virus and Coxsackie virus[17-20]. More importantly, our previous study demonstrated that emodin can inhibit HBV replication in vitro[8]. Therefore it is not surprising that emodin can inhibit HBV in vivo. APS has been used for chronic liver disease in China for thousands of years, and is known to increase CD3+ and CD4+ T-cells and the ratio of CD4+/CD8+ T-cells in mice, suggesting an immunoregulative effect[10]. Therefore, the combination of emodin and APS not only resulted in inhibition of HBV replication, but also regulation of the immunologic system to eradicate HBV in vivo. This may explain the weaker and long-lasting effects of emodin + APS.

In conclusion, for the first time, we demonstrated that emodin and APS had a weak but long-lasting inhibitory effect on HBV replication in vivo, which may provide a new therapeutic option for hepatitis B infection.

The current treatment strategy for hepatitis B is to eradicate the replication and infection of hepatitis B virus (HBV) using anti-virus drugs such as interferon and nucleoside analogs such as lamivudine. However, the actual effects of these treatments are neither ideal nor adequate. The aim of this study was to evaluate the anti-viral effect of emodin plus Astragalus polysaccharide (APS) in HBV transgenic mice.

In this study, the authors found that the combination of emodin and ASP suppressed HBV replication in HBV transgenic mice, which might be a potential alternative treatment method for HBV patients.

This is the first time that the combination of emodin and ASP was found to suppress HBV replication in vivo, which is valuable for anti-HBV drug screening in the future.

This study provides valuable experimental evidence for future anti-HBV drug studies. It may provide an alternative strategy for therapeutic intervention in the treatment of patients with HBV.

Emodin (1,3,8-tri-hydroxy-6-methylanthraquinone) is an active component of herbal medicine derived from the genera Rheum, Polygonum, Rhamnus and Senna. APS is a bioactive chemical in Astragalus membranaceus (AM) which has been used in medicine for centuries in China.

This is a well performed experimental study showing for the first time a moderate effect on in-vivo HBV replication of two molecules derived from Chinese Traditional Medicine drugs.