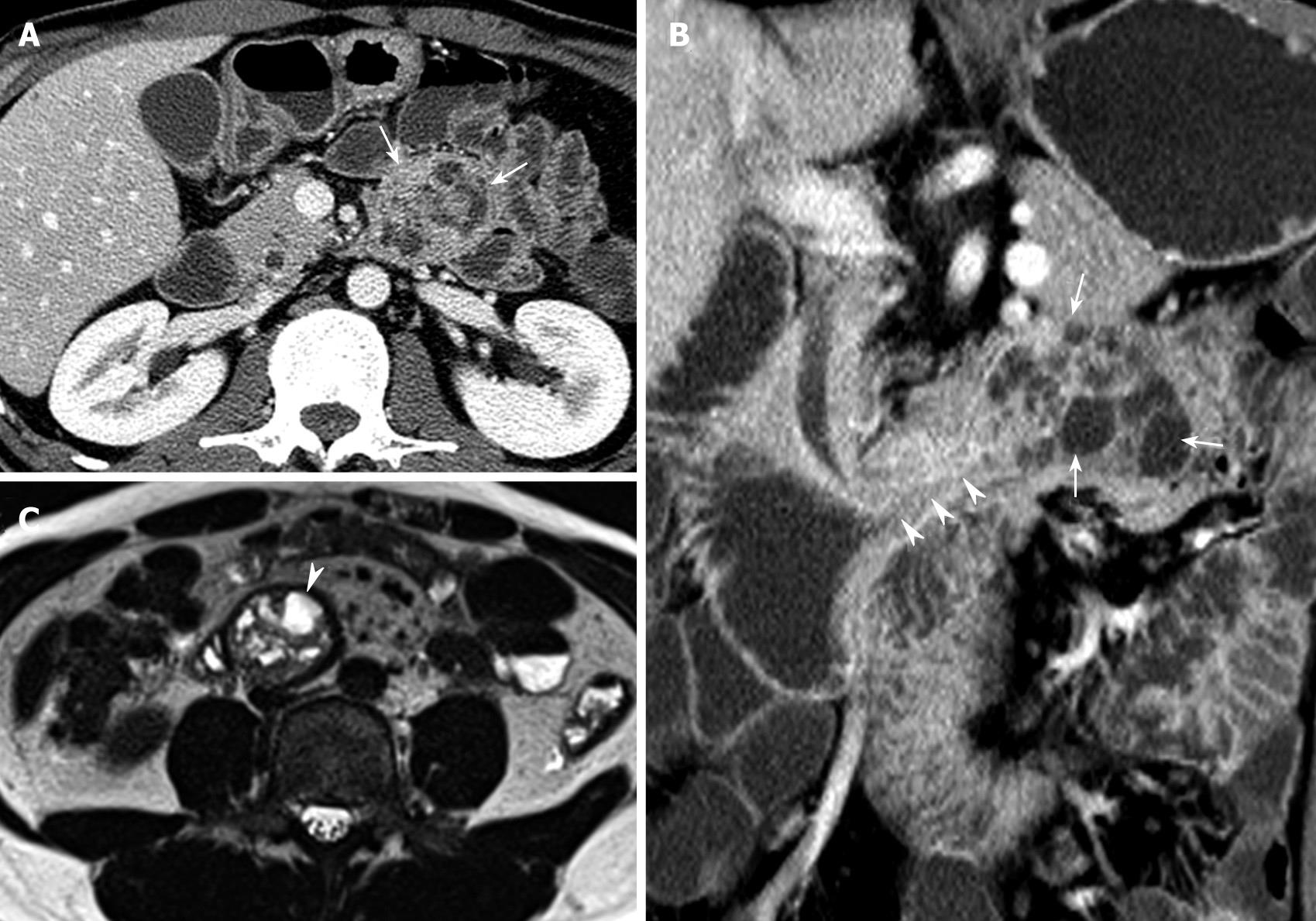 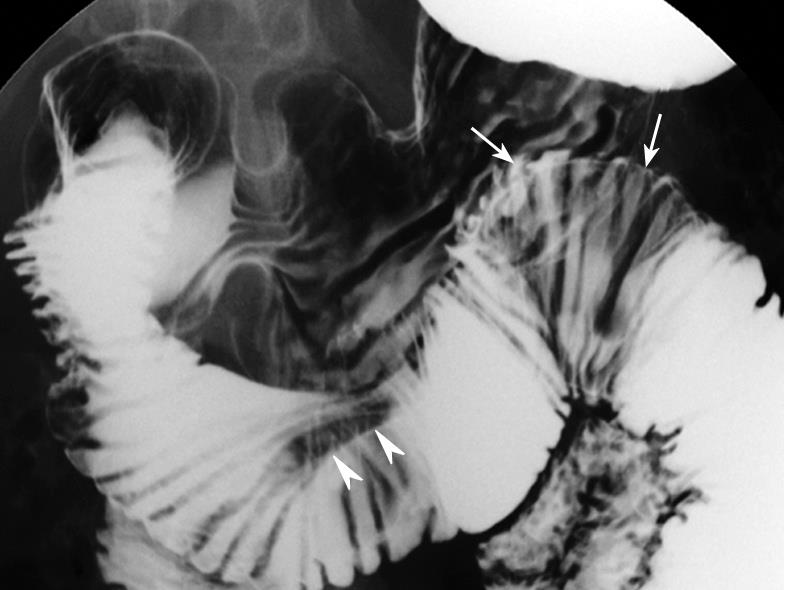 Figure 2 Modified small bowel series findings. A well-demarcated round filling defect (arrows) at the proximal jejunum just below the Treitz ligament and a tubular filling defect with a long stalk (arrowheads) originating from the proximal third portion of the duodenum. 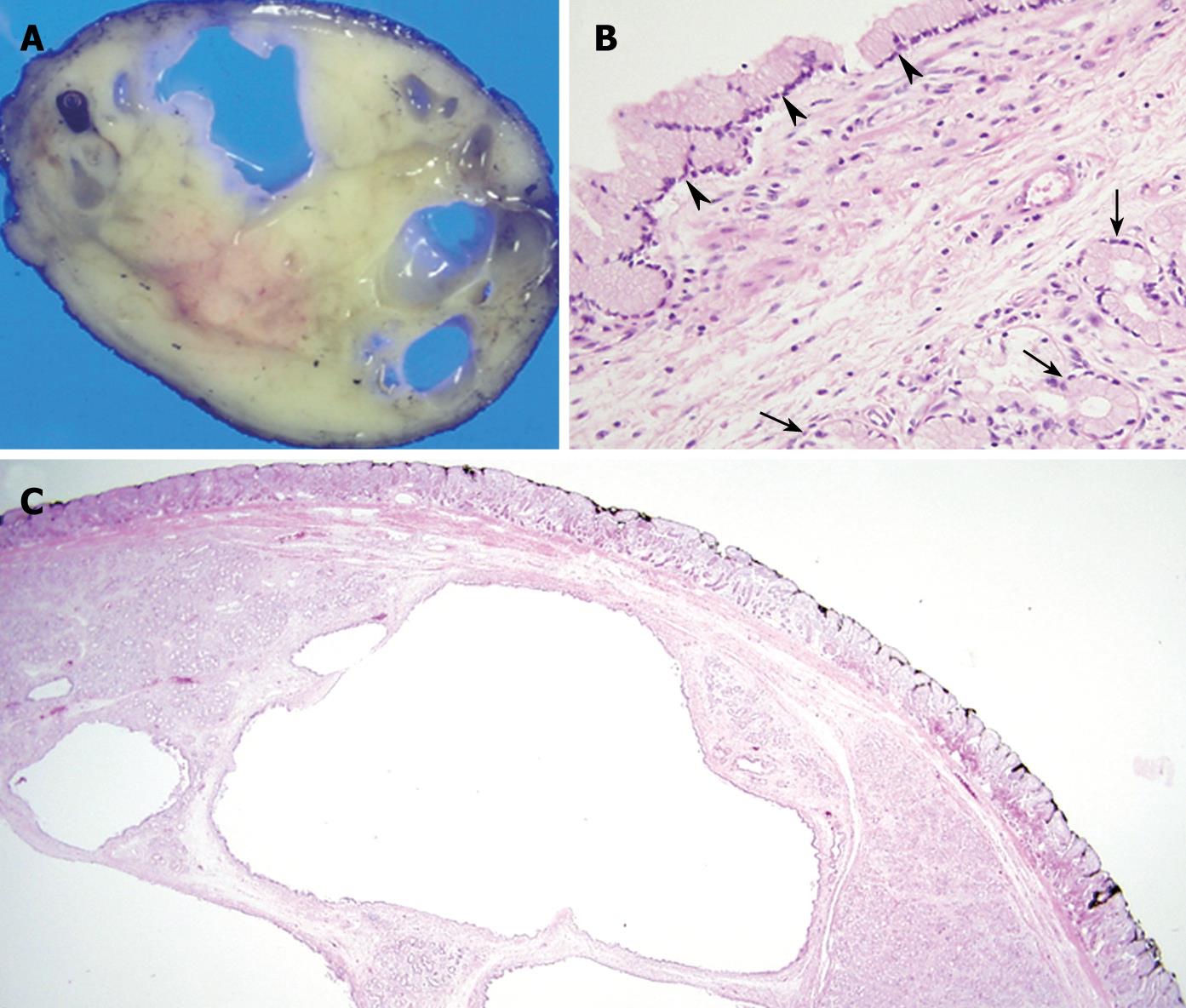 Figure 3 Histologic findings of the specimen. A: Cut surface of the gross specimen showing a multiloculated cystic appearance filled with mucin-like material; B: Aggregated glands (arrows) are lined with cuboidal to columnar cells with abundant pale cytoplasm and a basally-located oval nucleus, resembling a normal Brunner’s gland in histopathologic findings of cystic Brunner’s gland hamartoma (HE, × 200) while the large cystic dilated gland showing the same lining (arrowheads) as a normal Brunner’s gland; C: Cystic Brunner’s gland hamartoma showing a well-demarcated nodular lesion, composed of a lobular collection of tubuloalveolar glands separated by fibrous septa, beneath the muscularis mucosa, in the low power field (× 12.5), while some glands showing cystic dilatation.

Brunner’s gland hamartoma is an infrequently encountered benign tumor in the proximal duodenum, accounting for approximately 5% of all duodenal masses[1,2]. Fifty-seven percent of the tumors originate from the duodenal bulb and the incidence of the tumor decreases as the distance from the pyloric ring grows[3].

A 30-year-old man with a 3-d history of aggravated episodes of nausea, vomiting, and epigastric pain was referred by a private clinic. He was healthy with no specific family or past medical history. Physical examination and laboratory evaluation revealed no abnormalities.

Upper tract endoscopy was not performed because endoscopic results reported by the private clinic were within the normal limits. MDCT showed a 4 cm × 4 cm polypoid mass with multifocal internal low densities in the proximal jejunum just below the Treitz ligament (Figure 1A), and the lesion’s long stalk arising from the third portion of the duodenum (Figure 1B). Multifocal high-signal intensities on T2-weighted MRI reflected cystic components (Figure 1C), which were identical to the low densities on MDCT (Figure 1A and B). The lesion’s location moved to the third portion of the duodenum on MRI (Figure 1C). On the modified small bowel series, a mobile smooth lobular filling defect with a long stalk was visible in the proximal jejunum (Figure 2).

A pedunculated, well circumscribed mass was removed at laparoscopic enterotomy of the proximal jejunum, and the residual long remnant stalk was removed by post-operative endoscopy. The cut surface of the resected specimen revealed an approximately 4 cm × 3 cm whitish ovoid mass with multiple internal cystic spaces (Figure 3A). Histological examination of the specimen found that the main body of the polyp contained a lobular collection of mature Brunner’s glands with large multifocal areas of glandular cystic dilation (Figure 3B and C). There was no evidence of malignancy, and the lesion was diagnosed as a pedunculated cystic Brunner’s gland hamartoma.

Patel et al[14] have reported seven cases of Brunner’s gland hamartoma on CT. In that report, two lesions with homogenous enhancement correlated with histologic findings of solid glandular proliferation, and the remainder were found with heterogeneous enhancement and hypoattenuation. The latter cases revealed smooth muscle proliferation and small cystic dilatation of the Brunner’s glands. Up to now, to our knowledge, no study has described predominant cystic lesions of Brunner’s gland hamartoma found on imaging modalities such as MDCT and MRI, except for two cases that were found on endoscopic ultrasonography[5,6]. Endoscopic ultrasonography provides additional information about the internal components of the duodenal mass. Imaging modalities such as MDCT, MRI, and modified small bowel series were useful for tissue characterization and localization of the mass in our case, because the large pedunculated mass of the jejunum was difficult to approach by endoscopic ultrasonography.

In the present case, large cyst lesions in a pedunculated mass were revealed by characteristic multifocal high-signal intensities on T2-weighted MRI images, and large hypoattenuating areas on enhanced MDCT correlated with large cystic dilatation of the glands. Mobility due to its long stalk was confirmed by a modified small bowel series and positional change during serial imaging studies.

In conclusion, cystic configuration of a solitary duodenal mass should be generally considered the clue to the diagnosis of Brunner’s gland hamartoma.