We present the case of an elderly woman who developed a bowel perforation related to pneumatosis intestinalis, 33 years after a jejuno-ileal bypass for severe obesity. Final histological examination revealed the presence of dysplasia in the resected specimen. On the basis of our case and a review of the literature, we discuss the etiopathogenesis, the clinical aspects and the treatment of this rare condition. 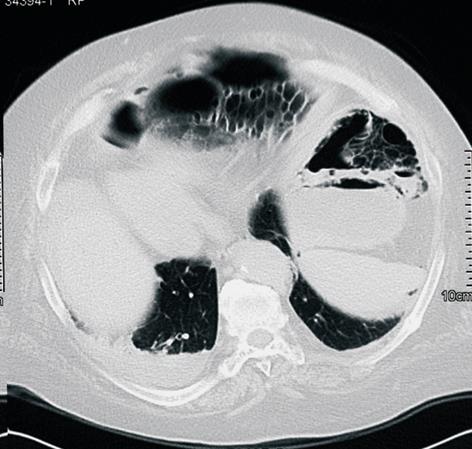 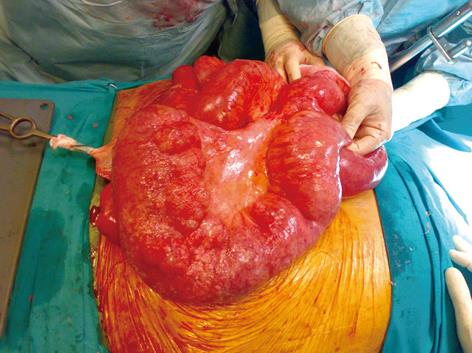 Figure 2 Intraoperative view of dilated and inflamed defunctionalized jejunal loop, with fibrous peritonitis. No clear evidence of enteric or biliary contamination was present.

Figure 3 Pathological findings. A and B: Macroscopic appearance of surgical specimen with the typical cysts at different magnifications; C and D: Submucosal cysts (C, HE, × 20) lined by giant cells (D, HE, × 100). 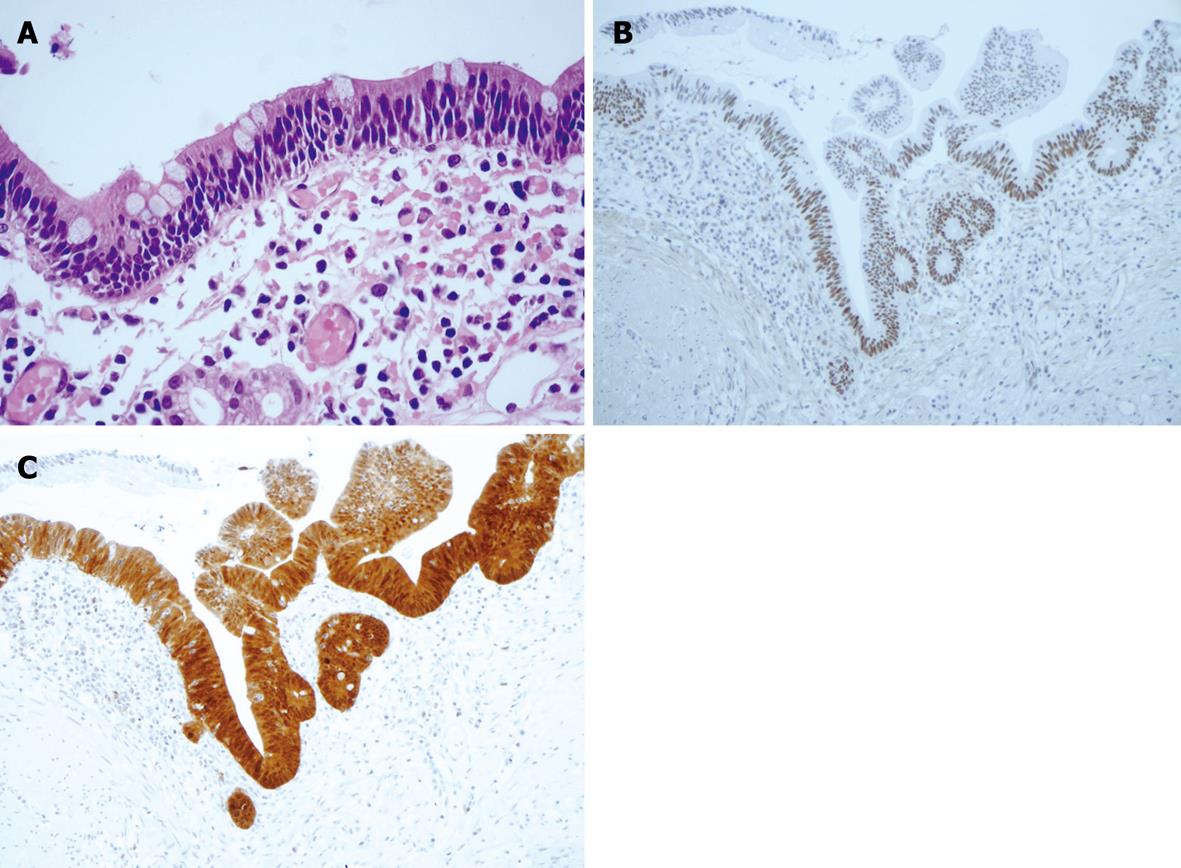 Figure 4 Histological appearance and immunohistochemical staining. A: Focal area of mild dysplasia (HE, × 60); B: Positivity for P53; C: P16.

Pneumatosis intestinalis (PI) is an unusual intestinal pathology characterized by a collection of multiple gas-filled cysts within the wall of the gastrointestinal tract. According to this general definition, PI may be seen in some critical events, including necrotizing enterocolitis in the newborn and ischemic bowel disease in the adult, but also in innocuous conditions which are associated with a wide spectrum of diseases and situations which do not require surgery[1-7]. Benign causes are statistically more prevalent; PI may resolve spontaneously, although recurrent episodes are reported and the long term outcome of patients is often unclear because of the absence of an exhaustive imaging follow up[1]. The lack of reliable data regarding the outcome predictors for patients with PI complicates management decisions.

A pneumoperitoneum and a pneumoretroperitoneum can be present regardless of causes and are generally considered a complication of PI. Peritonitis may be consequent, but this is not the rule and a lack of perforation is reported in the presence of mild clinical symptoms[3]. These conditions are difficult to manage, taking into account that some clinical conditions, such as immunodepression or obesity (not infrequent in these patients) may mask the clinical relevance of pneumoperitoneum so delaying treatment. On the other hand, an automatic referral to surgery may result in an unnecessary laparotomy.

Herein we present a case of PI associated with jejuno-ileal bypass performed many years previously and complicated by a pneumoperitoneum in an obese patient. The histological data, showing a dysplasia of the mucosa, are subsequently discussed.

C.D., a 73-year old woman, having undergone an end-to-side jejuno-ileal bypass for severe obesity 33 years previously, was admitted to the Medical Division of our hospital complaining of abdominal pain, constipation and mild dyspnea lasting 2 d. Relevant history included chronic obstructive pulmonary disease without dyspnea at rest, postsurgical hypothyroidism and atrial fibrillation with necessity of continuous warfarin administration recorded; no significant signs of digestive impairment were present. Weight was 105 kg and BMI was 41. At admission, the patient was oliguric, hypotensive (85/55 mmHg) and hypoxemic (PCO2 65 mmHg, SpO2 90%). On physical examination the abdomen appeared distended, with diffuse pain and a mild rebound tenderness; no peristalsis at auscultation. Laboratory investigations revealed mild metabolic acidosis (pH 7.3, bicarbonate 15.4 mmol/L) with normal lactate value, leukocytosis (14 000/mL) and acute renal failure (creatinine 2.6 mg/dL); PCR was 459, albuminemia 2.7 g/dL. A marked reduction of prothrombin value (< 10%, INR > 8) was noted, requiring plasma transfusion. Thorax radiography was negative for pneumothorax or pneumomediastinum. Computed tomography (CT) without intravenous contrast medium showed some gas-filled cysts within the wall of the jejunum, ileum and mesentery, associated with massive free intraperitoneal air (Figure 1). A rapid worsening of the patient’s general condition was observed, leading to urgent surgical intervention; the patient was classed as ASA four according to the American Society of Anesthesiology. At laparotomy, pneumatosis affected only the defunctionalized jejunal loop (Figure 2), which was abnormally dilated and distally anastomized end-to-side to the sigmoid loop. The first and the last segment of the bypassed bowel, including the ileocolic anastomosis, were relatively healthy. A transmural perforation was present in the antimesenteric border of the bowel along the tract with pneumatosis, in a context of fibrinous peritonitis, without evidence of free biliary or enteric fluid. A segmental 90 cm-long ileal resection with end-to-end anastomosis was performed, including the entire unhealthy bowel. The bacteriologic study on the peritoneal fluid showed the presence of Difteroides.

The macroscopic pathological analysis of the resected specimen showed a thickened bowel wall in the presence of multiple cysts without fluid, with a thin distended mucosa and absence of folded structure (Figure 3A and B). At the histological evaluation, the cysts were located in the submucosa and subserosa, with giant cells lining the cyst walls (Figure 3C and D). The mucosa was severely thinned, in some areas with a single cellular layer, and pseudo-atrophy of villi alternated with inflammation and ulceration. In some areas the epithelium was characterized by mild cytological atypia indicating low dysplasia (Figure 4A). Immunohistochemical staining with p53 (Thermo Fisher Scientific, Fremont, CA, USA, dilution 1:100) and p16 (Kit CINtec® Histology, MTM Laboratory, Germany) confirmed the diffuse positivity of epithelial cells in the focal mild dysplasia (Figure 4B and C). Marked flogistic reaction of the peritoneal serosa was reactive at the intestinal perforation.

The patient consequently became severely compromised during the whole surgical operation with prolonged hypotension and needed care in the intensive recovery room for 2 d. A progressive normalization of the septic signs and of renal function was then observed. Subsequently the patient’s recovery was uneventful and she was discharged on post-operative day 14.

Pneumatosis intestinalis may occur in many different situations. The etiology actually favours iatrogenic conditions (surgery, endoscopy, enteric tube placement, positive pressure ventilation), immunodepression, collagen vascular disease and infectious agents[2,4,5,7,8]. The jejuno-ileal bypass has accounted for some cases of PI; this condition is generally considered benign with a favourable outcome, supporting the concept that “surgical indication is not indicated under the usual circumstances”[9]. The published experiences on this topic, generally in the form of single cases or small series of patients, refer to reports from the 1970s[9-15], when this type of bariatric surgery was adopted in many centres. PI occurred any time during the first postoperative phase (mean delay 5 mo, range 1-20 mo)[7] and patients recovered spontaneously in the majority of cases[9,11].

Although responsible for a small number of cases, the “model” of jejuno-ileal bypass is well within the supposed pathogenetic mechanisms of PI, because these patients really present several predisposing factors. The first is ascribed to surgery alone with the consequent modification in bowel pressure[16]. Another factor may be related to the marked obesity, as PI has been described in obese patients without a history of abdominal surgery[9]. The type of reconstruction of bowel continuity also seems to play a central role; increased colonic gas secondary to fermentation of undigested lactose may reflux into the excluded segment of the small bowel. This occurs in particular when an ileum-sigmoid anastomosis has been performed, so favoring, because of abnormal pressure, the dissolution of gas into the bowel wall. This mechanism may be augmented by the concomitant bacteria overgrowth, most likely anaerobic, in the bypassed small bowel segment, so assigning the etiology of PI a mechanical - infectious process[12]. Our case tends to support this hypothesis. PI involved only the bypassed small bowel where the two mechanisms, high pressure and bacterial overgrowth, were more significant. An anastomosis had been built between the defunctionalized ileum and the sigmoid, the excluded small bowel was significantly dilated, with a clear discrepancy of size compared with that of the functioning bowel, and it was edematous. Histology showed a severe mucosal injury with marked inflammation and signs of a remodeling reactive process.

Pneumoperitoneum is a complication of PI, but not an automatic indication for surgery. An increasing list of conditions relating to pneumoperitoneum without peritonitis are now recognized[17,18], PI being the most common. These cases have a benign progression without laparotomy[17-22]. They are the prevalent situations where no transmural perforation exists: as a consequence, no peritoneal contamination results from the rupture of the intramural sterile blebs. According to these considerations, the demonstration of PI in a patient with pneumoperitoneum may allow us to avoid the need for a laparotomy[19]. This assumption must be accepted with caution in our opinion. The presence of PI is not enough to consider pneumoperitoneum as a benign condition in every case, with a good spontaneous outcome. Surgical indication must rely above all on the clinical data; neither CT nor the amount of free air are reliable guides for therapy[20]. A negative abdominal examination could exclude signs of peritonitis, but clinical signs may be minimal or absent, for example in immunodepressed patients, or difficult to discover, as in obese patients. These two situations clearly define an increased risk of a delayed diagnosis of peritonitis, which can present with an ominous course in these frail patients. In our patient, peritonitis was not clear at the time of admission owing to the marked obesity of the patient, but the general signs of septic compromise (hypotension, oliguria, leukocytosis, high PCR value) suggested the clinical relevance of the radiological images. Laparotomy became urgent within a few hours. A complete perforation was discovered in the defunctionalized bowel without extravasation of enteric content, but the presence of gram-positive bacteria in the peritoneal fluid together with the histological demonstration of inflamed peritoneal serosa confirmed the contamination from the intestinal lumen. In the context of a fibrinous peritonitis a simple suture of the perforation might be advised, but this was not our choice because the bowel appeared very dilated and inflamed. The possibility of saving the proximal and distal segments, which were macroscopically normal, directed us towards performing the resection of the pathological bowel.

The histological examination of the resected bowel showed obvious pathological aspects of the PI with typical submucosal cysts surrounded by granulomatous reaction; the peculiarity of the case is the discovery of focal areas of mild dysplasia confirmed by the immunohistochemical evaluation with p53 and p16. These findings have never been reported before. Owing to the rare indication for surgery in these patients, an exhaustive histological evaluation of the pathologic bowel is rare but generally marked by an intact, pale and sometimes transparent mucosa[7]. These changes, together with the unusually long time between the intestinal bypass and the discovery of PI in our patient, support the hypothesis of a long standing remodeling process, promoting the concept of a preneoplastic condition. This possibility, together with the rare occurrence of malignant lymphomas developing in the excluded intestine[23], leads us to advise a long term follow up. When surgery is indicated for this complication, complete resection of the tract with pneumatosis, if technically possible in symptomatic patients, appears to us to be advisable.