RESULTS: Immunohistochemical results showed overexpression of PLK1 was mainly found in tumor tissues compared with tumor-free tissue. A similar mRNA result was obtained by semi-quantitative RT-PCR. A total of 111 samples were positive for PLK1 mRNA expression. The positive expression was correlated with venous invasion, tumor nodules and Edmondson grade. Furthermore, 1, 3, 5-year survival rates in the positive expression group were significantly lower than the negative control group. Multivariate analysis showed that positive PLK1 expression was an independent risk factor for HCC.

CONCLUSION: PLK1 could be a potential biomarker for diagnosis and therapy for HCC. 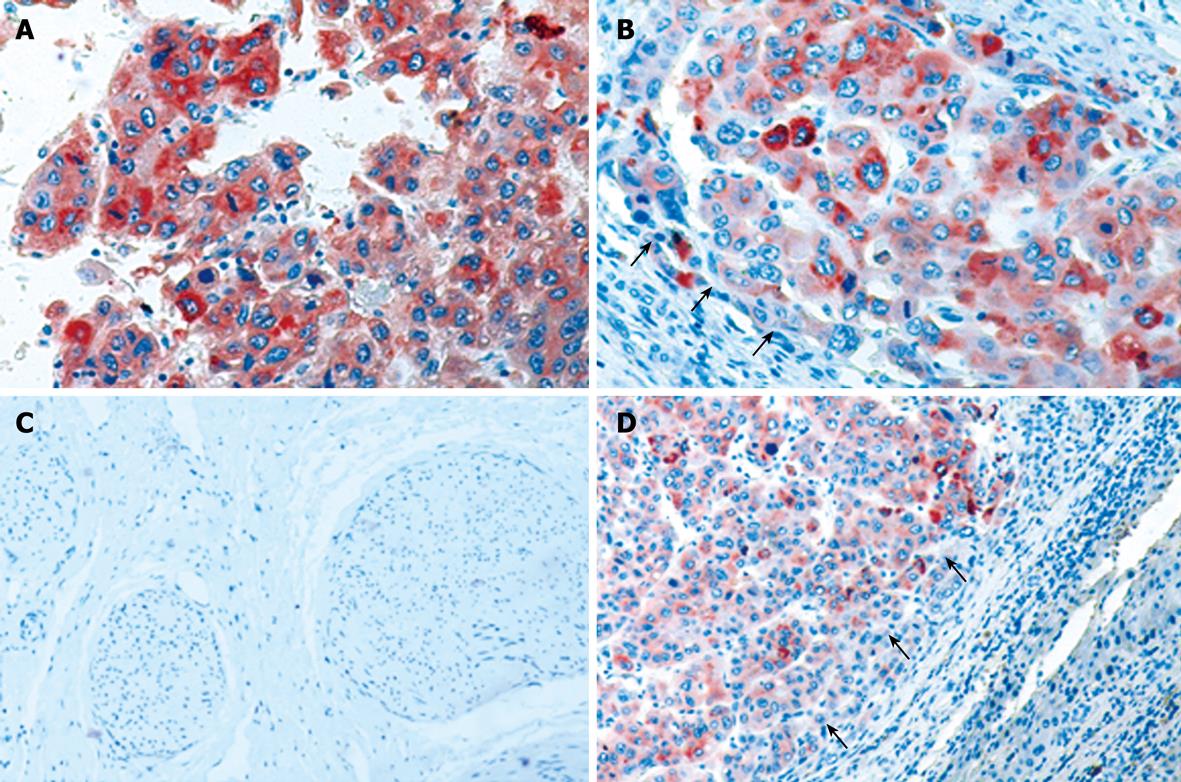 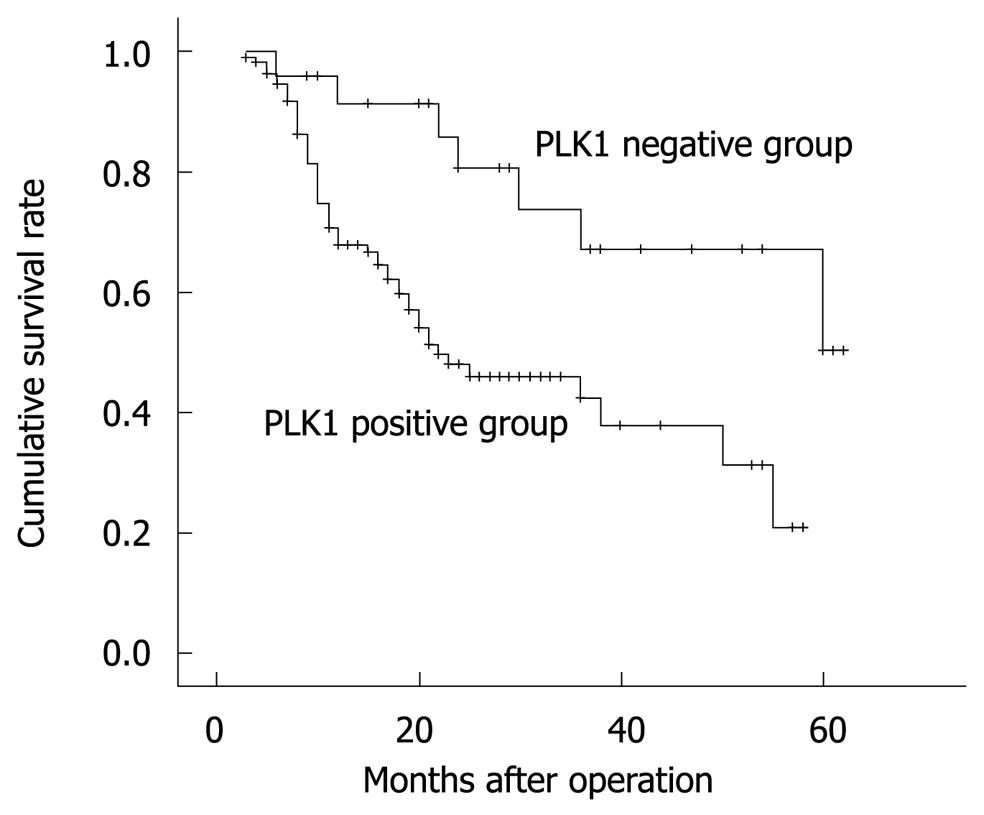 Figure 3 Log-rank test shows that HCC patients in the positive PLK1 mRNA expression group had a lower survival than those in the negative group.

Hepatocellular carcinoma (HCC) is one of the deadliest of all cancers, ranking third among all cancer-related mortalities[1]. Surgical resection plays a major role in the treatment of HCC. However, less than 30% of HCC patients are surgical candidates[2] due to limiting factors such as severe impairment of hepatic functional reserve, bilobar tumor distribution and extra-hepatic metastasis. No single-agent or combination chemotherapy regimen has been found to be particularly effective in HCC[3]. Locoregional treatment is not the first choice for HCC[4] and is reserved for non-surgical candidates.

The study of carcinogenesis mechanisms may provide new treatment regimens for cancer. Many key carcinogenetic pathways, such as increased angiogenesis, aberrant signal transduction and dysregulated cell cycle control, appear to be involved in tumor development.[5]. As a cell cycle control kinase, polo-like kinase1 (PLK1) and its overexpression are highly associated with many human cancers, including bladder[6], breast[7-10], colorectal[11,12], endometrial[13,14], esophageal[15-17], gastric[18-21], glioma[22], hepatoblastoma[23], hepatocellular carcinoma[24], head and neck[25], leukemia and lymphoma[26,27], melanoma[28,29], non-small-cell lung[30], ovarian[31], papillary[32], pancreatic[33,34], prostate[35] and thyroid cancer[36]. However, up to now, as far as we know, there are few studies available on the overexpression of PLK in HCC. The objective of our study was to understand the relevance of PLK1 expression in HCC.

There were 135 successful hepatectomy procedures for HCC performed from January 2003 to September 2008 in our department. None of these patients were given preoperative transarterial chemoembolization as a neoadjuvant treatment, but they all regularly received postoperative chemoembolization by hepatic artery infusion. All specimens from 135 cases were collected, immediately frozen in liquid nitrogen and subsequently stored at -70°C for reverse transcription-polymerase chain reaction (RT-PCR). Five cases of liver regenerating nodule samples were obtained from patients with liver cirrhosis as controls. The clinicopathologic variables were recorded in detail including gender, age, liver cirrhosis, hepatitis B surface antigen, α-fetoprotein (AFP), venous invasion, Edmondson stage, tumor size (cm) and number of tumor nodules. Two expert pathologists who were blinded to the other results of the study, scored the HCC samples. The study protocol was approved by the Ethics Committee of Central South University, and written informed consent was provided by all participants prior to initiation of the study.

All patients were involved in our follow-up system, and were reviewed at 1-2 mo intervals. Routine post-operative medical examinations were carried out every 2 mo, including liver function, serum AFP level, B-ultrasound and CT. Follow-up ranged from 3-62 mo and ended on December 31, 2008. The median follow-up time was 18 mo.

Total RNA was extracted from tumor and tumor-free tissues using the TRIzol reagent (Gibco BRL) according to the manufacturer’s instructions (Gibco BRL). cDNA synthesis performed using the reverse transcription system. The primers were as follows: PLK1, 5'-GATTCCACGGCTTTTTCGAG-3', 5'-CCCACACAGGGTCTTCTTCC-3' (product size, 296 bp); β-actin: 5'-CGCGAGAAGATGACCCAGAT-3', 5'-GCACTGTGTTGGCGTACAGG-3' (product size, 550 bp). The following PCR cycling parameters were employed: at 95°C for 5 min, followed by 35 cycles at 95°C for 45 s, 56°C for 1 min, at 72°C for 1 min and then 72°C for 7 min. The PCR products were resolved on a 1.5% agarose gel. All experiments were carried out in triplicate.

Immunohistochemical reaction against PLK1 (BD Transduction, a monoclonal mouse antibody) was performed in 5 μm paraffin sections. Negative controls were processed without primary antibody. For antigen retrieval, deparaffinized slides were placed in 0.01 mol/L sodium citrate buffer, pH 6.0 and boiled for 5 min in a pressure cooker. Then, slides were allowed to cool down for an additional 5 min in the same buffer. After several rinses in TBS and pre-treatment with blocking reagent (Dako, Glostrup, Denmark) for 5 min, slides were incubated with primary antibody diluted 1:500 (PLK1) and 1:50 (Ki-67) in antibody diluent solution (Zymed, San Francisco, CA, USA) for 20 min at room temperature and then at 4°C overnight. After slides were washed in TBS,. The slides were visualized using Aquatex (Merck, Gernsheim, Germany).

Quantitative values were presented as mean ± SD or median (range). Independent Student’s t-test was used to compare PLK1 mRNA expression in HCC and non-cancer samples. The Mann-Whitney U test was used for correlations between PLK1 mRNA expression and clinicopathologic variables. The Kaplan-Meier method was employed to calculate survival and the log-rank test to compare survival among two patient groups. Cox regression was adopted for multivariate analysis of prognostic predictors. The statistical software package SPSS16.0 (SPSS Inc, Chicago, IL) was applied for all analyses. A statistically significant P value was defined as < 0.05.

The pattern of PLK1 protein expression was examined by means of immunohistochemical analysis. Overexpression was detected in tumor tissues, especially in cytoplasm, compared with the tumor-free tissue. A more varied morphology of the cells was reflected by high expression in the cytoplasm. (Figure 1A and B). Tumor tissues had sharp margins under the microscope (Figure 1B and D). No or sporadic expression was observed in adjacent normal tissue or regenerating nodules (Figure 1C and D).

Expression of PLK1 mRNA in HCC

As mentioned above, 135 cases of HCCs were divided into positive and negative expression groups. The Kaplan-Meier method was employed to analyze the correlation of PLK1 expression level and the prognosis of HCC patients. Our results indicated that the positive expression group correlated with a shorter survival time than the negative group. The median survival time was 22.53 mo vs 60.88 mo. In addition, the 1, 3 and 5 year survival rates for the patients with positive and negative expression in HCC were 91.3%, 67.1% and 50.3% and 67.8%, 42.3% and 20.9%, respectively. The overall survival rates in the two groups was significantly different (P = 0.003, log-rank test) (Figure 3). At the same time, all the clinicopathologic variables were also analyzed with the Kaplan-Meier method. The results showed that a high Edmondson grade, venous invasion and multiple tumor nodules were correlated with a poor prognosis in HCC while the other clinicopathologic variables did not provide any independent prognostic information (Table 2).

Polo-like kinase 1 (PLK1) belongs to a family of conserved serine/threonine kinases involved in multiple mitotic processes[37], including functional maturation of centrosomes, establishment of the bipolar spindle[38], chromosome segregation[39] and response to DNA damage[40]. PLK1 is essential in the G2/M-phase transition. The enzyme is able to activate CDC25c which in turn activates the CDC2/cyclin B1 complex leading to the import of cyclin B1 into the nucleus[41], and it is also able to phosphorylate cyclin B1 directly[42]. Moreover, PLK1 has been implicated in the regulation of anaphase-promoting complex/cyclosome[43]. Interestingly, overexpression of PLK1 has been associated with tumor development and can serve as a prognostic marker for some cancers[12,20,31]. However, few previous reports have examined the possible role of PLK1 in HCC.

In our study, overexpression of PLK1 by immunohistochemical analysis was detected in tumor tissues,while no or sporadic expression were observed in adjacent normal tissue or regenerating nodules. Further investigation showed that the degree of PLK1 mRNA expression was also higher in HCC tissues than in adjacent normal tissues and regenerating nodules; elevated mRNA levels of PLK1 were detected in 82.22% of tumor samples. These data indicate that overexpression of PLK1 was a frequent event in hepatocellular carcinoma.

In investigating the association between PLK1 expression and clinicopathological data, PLK1 positive expression was correlated with multiple tumor nodules, high Edmondson-Steiner grade (III, IV) and venous invasion; 1, 3 and 5 year survival rates of the positive expression group were 67.8%, 42.3% and 20.9%, respectively, lower than the negative group (P < 0.01); multivariate analysis showed that PLK1 was an independent prognostic factor. Thus, overexpression of PLK1 predicts a poor prognosis in HCC patients.

PLK1 is well known to be involved in cell proliferation. Was the PLK1 overexpression the cause of tumor formation or the consequence of high mitotic index during tumor cell proliferation? Others studies have shown that the overexpression of PLK1 in NIH3T3 leads to tumor formation[44], and knockdown of PLK1 causes inhibition of growth and induction of apoptosis in human esophageal cancer cells[17]. Furthermore, PLK1 was inhibited by DNA damage in the G2 phase of mitosis. When the conserved threonine residue in the T-loop was changed to aspartic acid, expression of these mutants was found to override the G2 arrest induced by DNA damage[45]. In our studies, the level of PLK1 mRNA expression in HCC was obviously higher than in regenerating nodules, which also indicted that PLK1 might be a “proto-oncogene” for HCC.

In summary, this is the first attempt to clarify the relation of PLK1 expression and HCC. Our results indicate that high PLK1 expression predicts a poor prognosis in HCC patients. The data further suggest that PLK1 may serve as a potential biomarker for HCC. However, this is only a preliminary step. Further studies are warranted to understand the overexpression mechanism of PLK1 and to develop effective targeted interventions as a therapy for HCC.

Hepatocellular carcinoma (HCC) is one of the deadliest of all cancers with as yet incompletely elucidated causes. As a cell cycle control kinase, polo-like kinase1 (PLK1) and its overexpression are highly associated with many human cancers. However, few studies are available on the overexpression of PLK1 in HCC.

As a preliminary study of the relation between overexpression of PLK1 and HCC, it was found that overexpression of PLK1 was mainly found in tumor tissues compared with tumor-free tissue by immunohistochemical tissue slides and semi-quantitative reverse transcription-polymerase chain reaction analysis. In all HCC patients involved in the follow-up system, the survival rates in the PLK1 positive expression group were significantly lower than the negative control group. Theses results indicate that PLK1 could be a potential biomarker for diagnosis and therapy for HCC.

PLK1: PLK1 is an important regulator of cell cycle progression during M-phase, involved in the assembly and dynamics of the mitotic spindle apparatus and in the activation and inactivation of CDK/cyclin complexes.

This is a good descriptive study in which authors correlated polo-like kinase 1 expression in human HCC with clinicopathological findings. The data are very informative and deserve publication in the journal. The results are interesting and suggest that PLK1 could be a potential biomarker for diagnosis and therapy for HCC.