Citation of this article
Yamashita K, Yatabe T. Intraoperative glycemic control procedures and the use of an artificial pancreas. World J Gastroenterol 2009; 15(33): 4126-4131

Strict intraoperative glycemic control can significantly decrease the incidence of postoperative infection; however, anesthesiologists must carefully control blood glucose levels as well as properly manage the respiratory and cardiovascular systems. However, standard blood glucose measurement systems and insulin dosing algorithms, which are necessary for achieving strict glycemic control, have not yet been developed. An artificial pancreas (STG-22TM; Nikkiso Co., Tokyo, Japan) is considered a highly accurate blood glucose monitoring system capable of closed-loop control of blood glucose. The device has, however, many problems to be addressed since it is a large and expensive system with little versatility, and it requires a large amount of blood to be collected. Therefore, the development of less invasive and inexpensive systems with future technological progress is greatly anticipated. 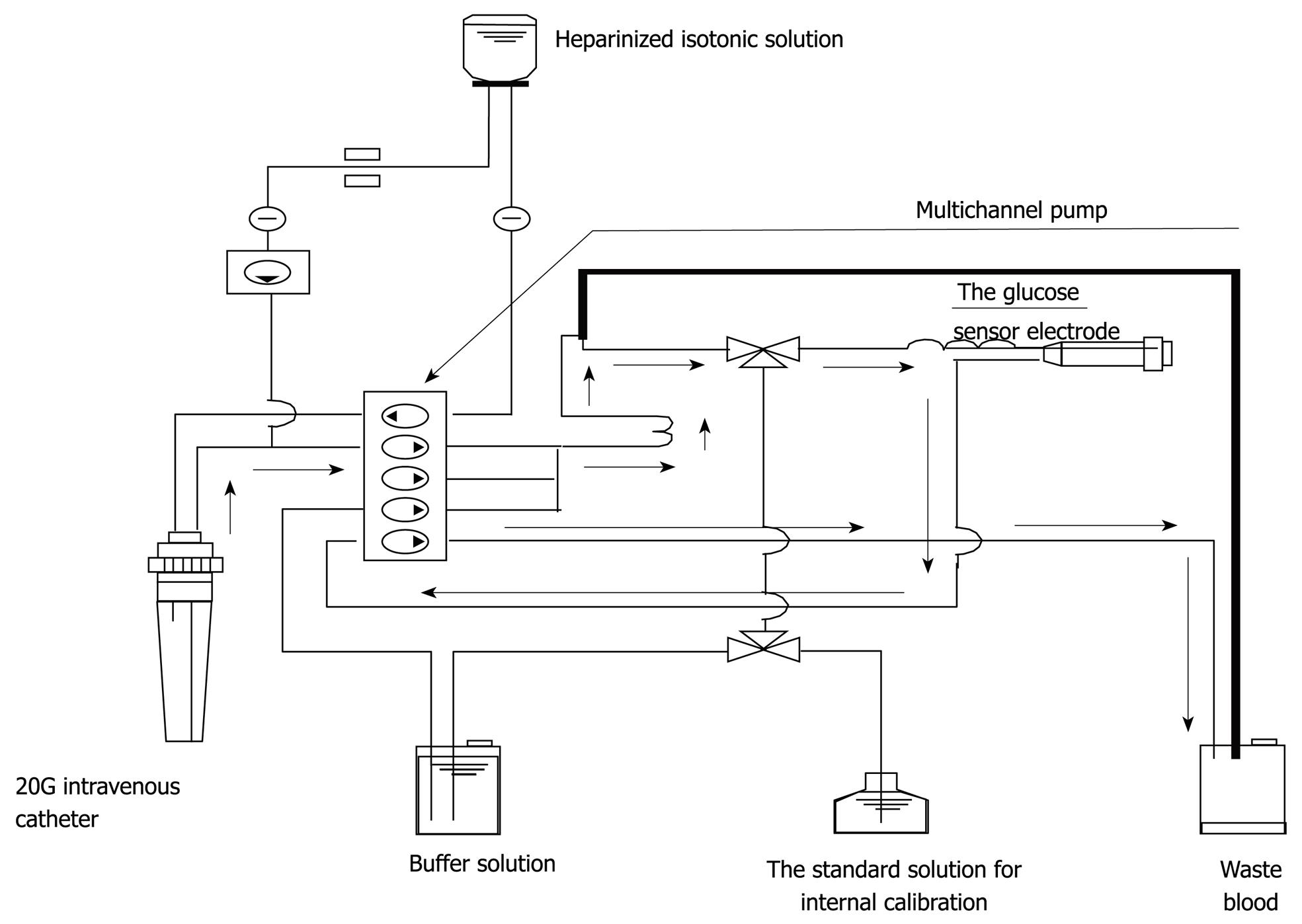 Figure 1 The whole circuit of the STG-22TM. Arrows indicate the direction of blood sampling. 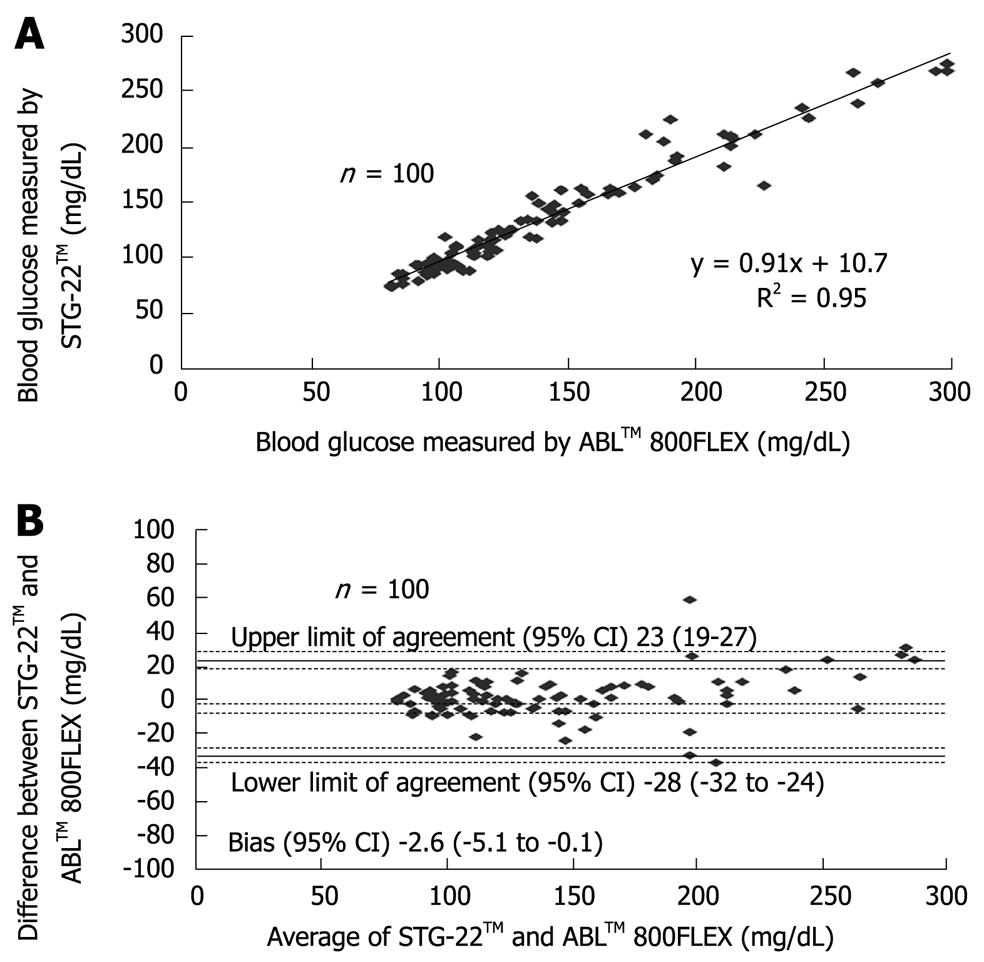 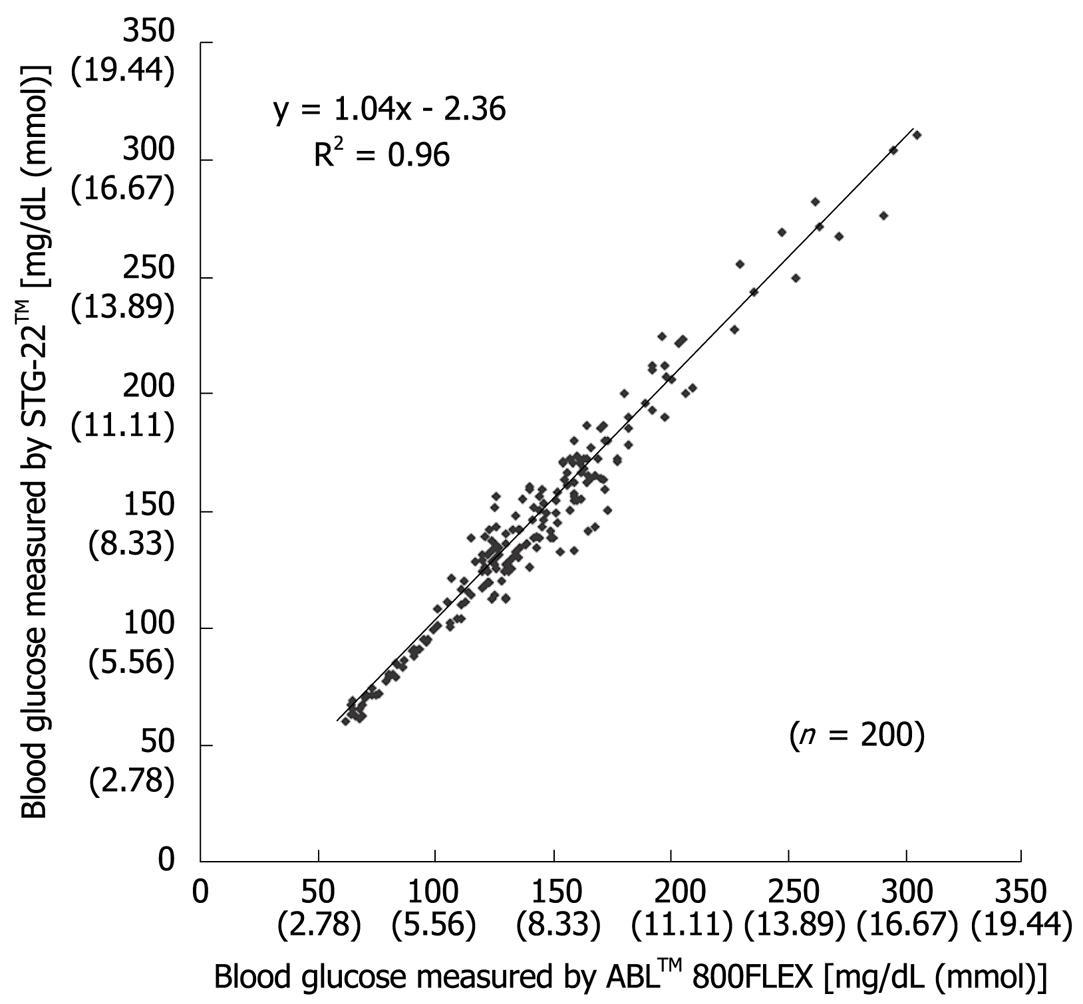 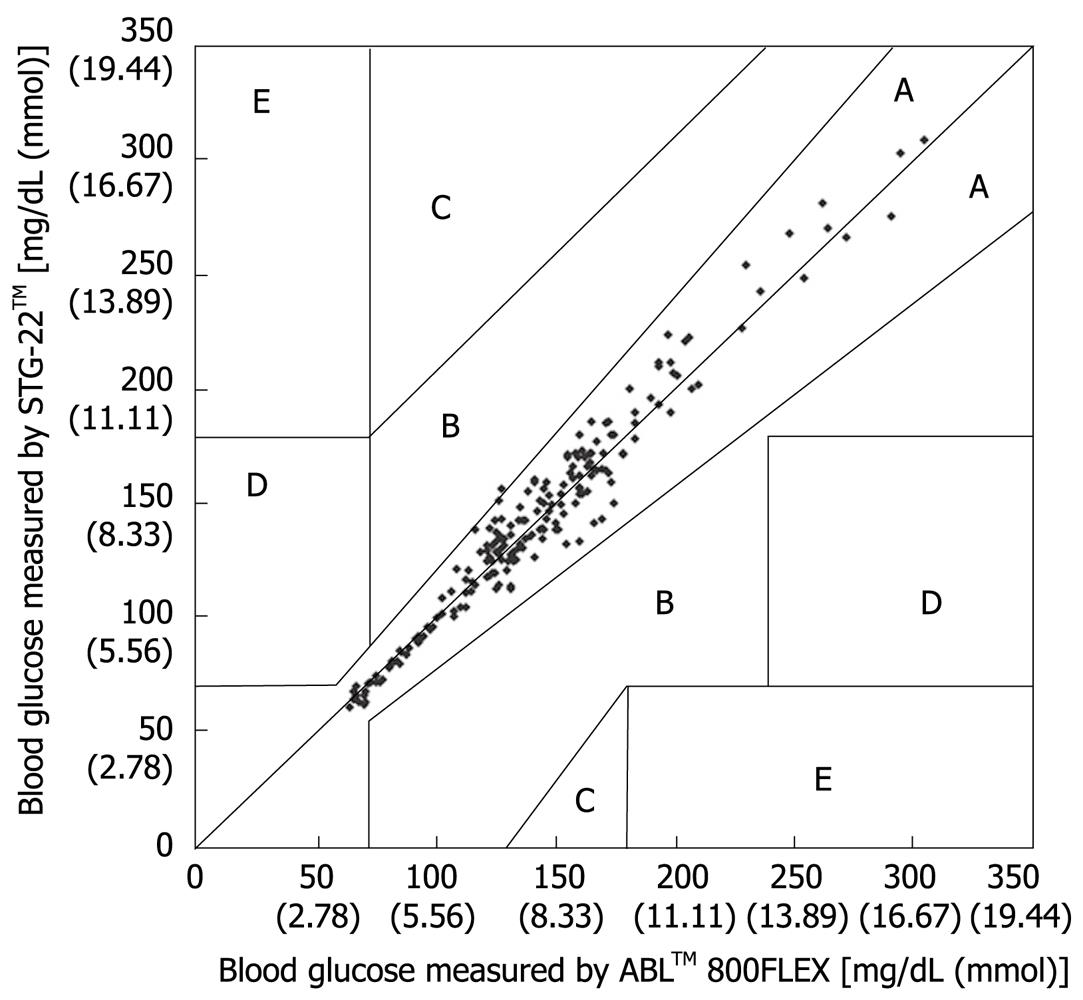 Figure 5 Error grid analysis for evaluation of blood glucose measured by STG-22TM compared with those measured by ABLTM 800FLEX. Zone A, B: Accurate or acceptable; Zone C: Unnecessary corrections that could lead to a poor outcome; Zone D: Dangerous failure to detect and treat; Zone E: ‘Erroneous treatment’[21]. 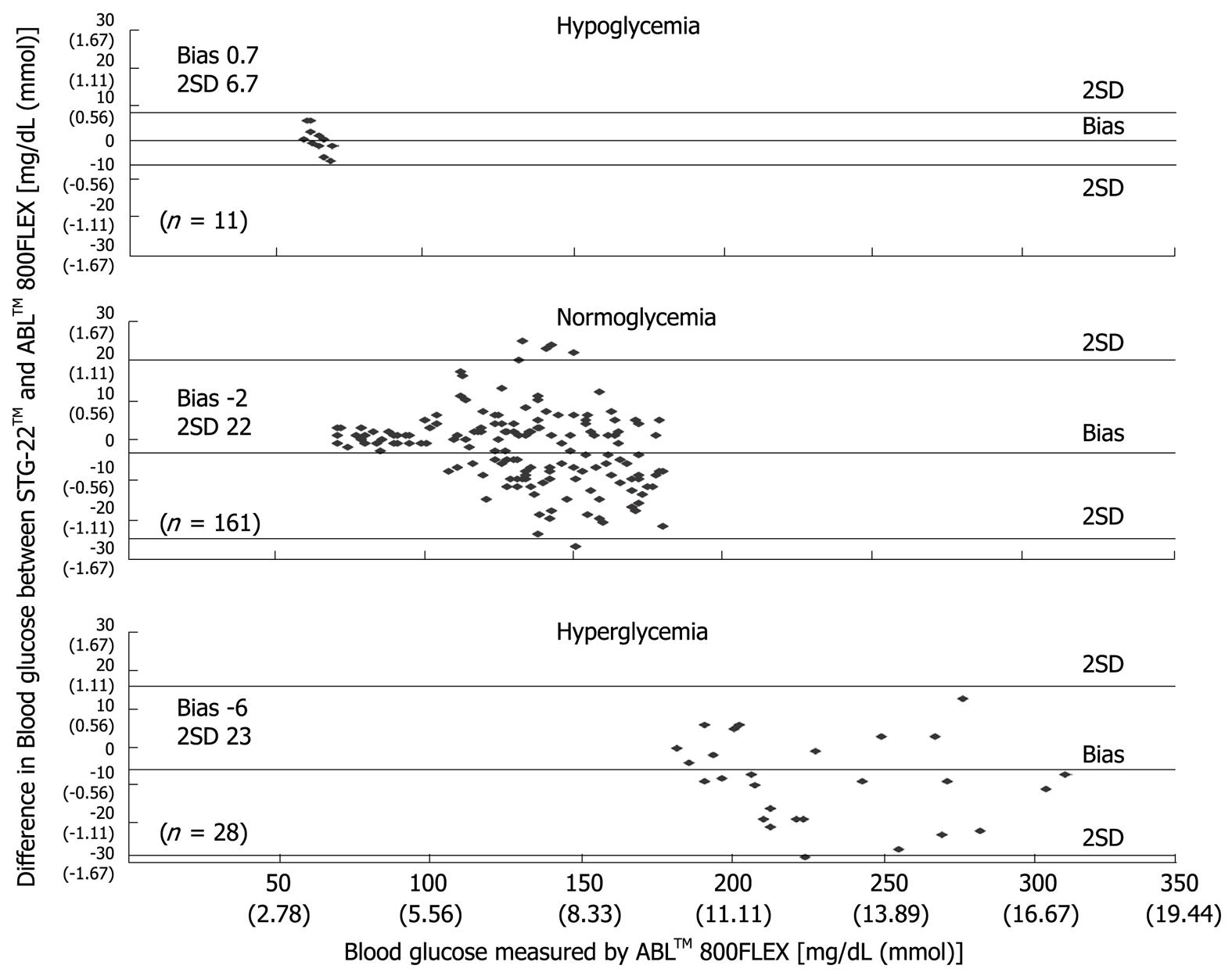 PROBLEMS ENCOUNTERED REGARDING THE VOLUME OF BLOOD COLLECTED

Measurement errors become an issue during strict glycemic control for maintaining blood glucose at a level between 80 and 110 mg/dL. According to the standards established by the International Organization for Standardization, the errors defined for glucose concentrations of 4.1 mmol (74 mg/dL) or above must not be greater than 20%, and those for glucose concentrations of 4.1 mmol (74 mg/dL) or below must not be greater than ± 0.8 mmol (14 mg/dL), and these values are not guaranteed by the accuracy of portable blood glucose measurement systems. STG-22TM, which is currently being used for a clinical study by our group, is a highly accurate and reliable system. Its measurement errors are below 21% during intraoperative measurement[20] (Figure 3) and not more than 15% during postoperative measurements[21] (Figures 4, 5 and 6). These findings suggest that STG-22TM can sufficiently perform closed loop control of blood glucose based on measurement results.

Sliding scale dosing of insulin, described previously as a special feature, is not described here. A program that calculates insulin dosage based on the blood glucose level, rate of its change and target blood glucose level is expected to be used widely in clinical applications, since such a program has been reported to decrease the incidence of hypoglycemia by approximately 0.3%[22]. On the other hand, STG-22TM is the only system equipped with a closed-loop algorithm that enables continuous measurement of blood glucose levels and provides updated results. This system utilizes Shichiri’s algorithm, which calculates insulin dosage on the basis of the fact that glucose-stimulated insulin secretion is based on the proportional-derivative action[23]. The results of our previous studies have proven that use of STG-22TM achieves good postoperative glycemic control among patients who received surgical treatments[24,25]. Here, we aim to further evaluate the applicability of this system to intraoperative glycemic control.

A continuous noninvasive blood glucose monitoring system is an ideal instrument for strict glycemic control. Pasic et al[26] previously developed a blood glucose measurement system by combining microdialysis and an optic fiber, and they succeeded in performing continuous in vitro measurement for 3 d. Maruo et al[27] have also developed a near-infrared based blood glucose monitoring system, and its application to patients in the intensive care unit showed a good outcome. However, these systems present disadvantages in terms of convenience and accuracy, making strict glycemic control difficult. Further improvements to these systems are needed.

Recently, an insulin inhalant has been approved in the US and Europe. In terms of drug assimilation, the lung possesses a large surface area for drug absorption. Moreover, the rate of solute absorption is fast in the alveolar epithelium, and mucosal clearance in the alveoli is slower than that in the bronchi. Therefore, the lung is a very suitable route for administering high-molecular-weight insulin. Because of the reasons mentioned above, the lung can therefore possibly be used as a new route for administering drugs when peripheral circulation is impaired. In support of this, Barnett et al[28] have reported that long-term inhaled insulin therapy has no adverse effects on pulmonary function and thus its wide application is expected in the future.