AIM: To assess the reliability and validity of the translated version of Nepean Dyspepsia Index (NDI) in Chinese patients with documented functional dyspepsia (FD).

METHODS: The translation process included forward translation, back translation, pretest and cross-cultural adaptation. Reliability and validity of the translated version were examined by asking 300 subjects to complete the Chinese version of the NDI. The mean age of subjects was 39.24 years and 68.7% of the subjects were women. Internal consistency analysis with Cronbach’s α was performed to test the reliability. Correlation analysis was used to assess the content validity. Factor analysis and structural equation models were used to assess the construct validity.

CONCLUSION: The Chinese version of the NDI is a reliable and valid scale for measuring health-related quality of life and disease severity in Chinese patients with FD.

Functional dyspepsia (FD) is a common clinical condition characterized by chronic or recurrent upper abdominal pain associated with a variety of gastrointestinal symptoms in the absence of organic disease[1]. An epidemiological survey in Western countries showed that 19%-41% of the population have symptoms of FD[2]. The report on the incidence of FD in citizens of Tianjin, China, revealed that the number of patients with FD accounts for 23.29% of the total population[3]. Since FD greatly affects the quality of life (QOL) of patients[4–6], and contributes to a higher medical cost[78], it represents an important healthcare problem in modern society. However, treatment of FD is still controversial and no single therapy is uniformly effective, partially due to lack of a reliable evaluation instrument[9]. Many difficulties exist in the single treatment approach to FD[10]. A combined approach, which includes herbal medicine, acupuncture and massage therapy, may be more effective than any single treatment[11].

In addition to symptom evaluation, assessment of QOL has been recognized as a major factor for overall health outcome assessment in FD clinical studies. Nepean Dyspepsia Index (NDI) was designed to measure both symptom scores and impairment of the dyspepsia-specific health-related QOL (H-QOL). Since the development of NDI in 1998[12], it has been used as an outcome assessment in many FD clinical researches[1314] and translated into several languages including French, Dutch, Italian, German, Spanish, and American English[1516]. NDI has proven vital in the diagnosis of FD[12], and its utility has been validated[417]. A number of studies about the effect of FD on QOL in Western patients are available[71819]. However, the effect of FD on the QOL in Asian patients has not received great attention.

Since no validated disease-specific questionnaire is currently available for assessing the impact of FD on the QOL, we translated the original version of NDI (25 items) into Chinese. We also assessed the reliability and validity of this translated version in Chinese patients with documented FD in order to provide researchers, clinicians, and patients with a suitable questionnaire to assess FD.

This study was approved by the Ethics Committee of Chengdu University of Traditional Chinese Medicine. All subjects provided their written consent before participation in this study.

The study was performed at Chengdu, Wuhan and Changsha medical centers, which comprise five hospitals in total. Before inclusion in the trial, all patients underwent physical examination, abdominal ultrasonography and upper gastrointestinal endoscopy to exclude organic gastrointestinal cause for their symptoms. Patients at the age of 18 years and older were considered eligible in the study. If their endoscopy was either normal or showed only chronic superficial gastritis, they were diagnosed with FD according to Rome-III criteria[20] with no cholecystitis or cholelithiasis on their sonogram. Patients with a history of upper gastrointestinal surgery, or who were pregnant or lactating, were excluded. Mental deficiency, psychiatric, cardiovascular, hepatic, and renal diseases were the additional exclusion criteria. The investigation was carried out in a quiet environment. Specialists explained each item to the patients so that the patients could understand and complete the questionnaire correctly.

The original 25-item NDI[17] consists of three parts: a symptom checklist that measures the frequency, intensity and level of discomfort of 15 upper gastrointestinal symptoms over the prior 14 d, 25 items designed to assess QOL, and an 11-item questionnaire designed to measure the relevance or importance of the above items.

The QOL includes four domains, namely interference (13 items), know/control (seven items), eat/drink (three items), and sleep/disturb (two items). The scores were determined with a five-point Likert scale which ranges “not at all”-“extremely”. The NDI for QOL score ranges 0-99, higher scores indicate poorer QOL. Symptoms were scored separately from questions representing the QOL. The higher the score of each individual symptom is, the severer the symptom is.

After permission, the original version of NDI was translated into Chinese according to the WHO-QOL methodology of cross-culture adaptation for QOL[21]. Forward translation from the original English version was performed independently by two gastroenterologists with good English. Both forward versions were then reconciled and incorporated into the Chinese version. Back translation was carried out by an English teacher understanding the Chinese language with no knowledge of NDI. The semifinal version was derived from reconciliation of the original, back and forward translations. A pretest, NDI for five patients with FD was performed. The final version was obtained after cross-cultural adaptation.

All data were analyzed with SPSS 13.0 version. Data derived from descriptive statistical analysis were presented in the form of percentages including categorical variables and calculation of the mean. P < 0.05 was considered statistically significant.

The total score for each symptom on the checklist was calculated by adding its corresponding frequency, severity and level of discomfort. As stated above, higher scores were elicited for symptoms of discomfort, bloating, and pain or ache in upper abdomen, and fullness after eating or slow digestion. 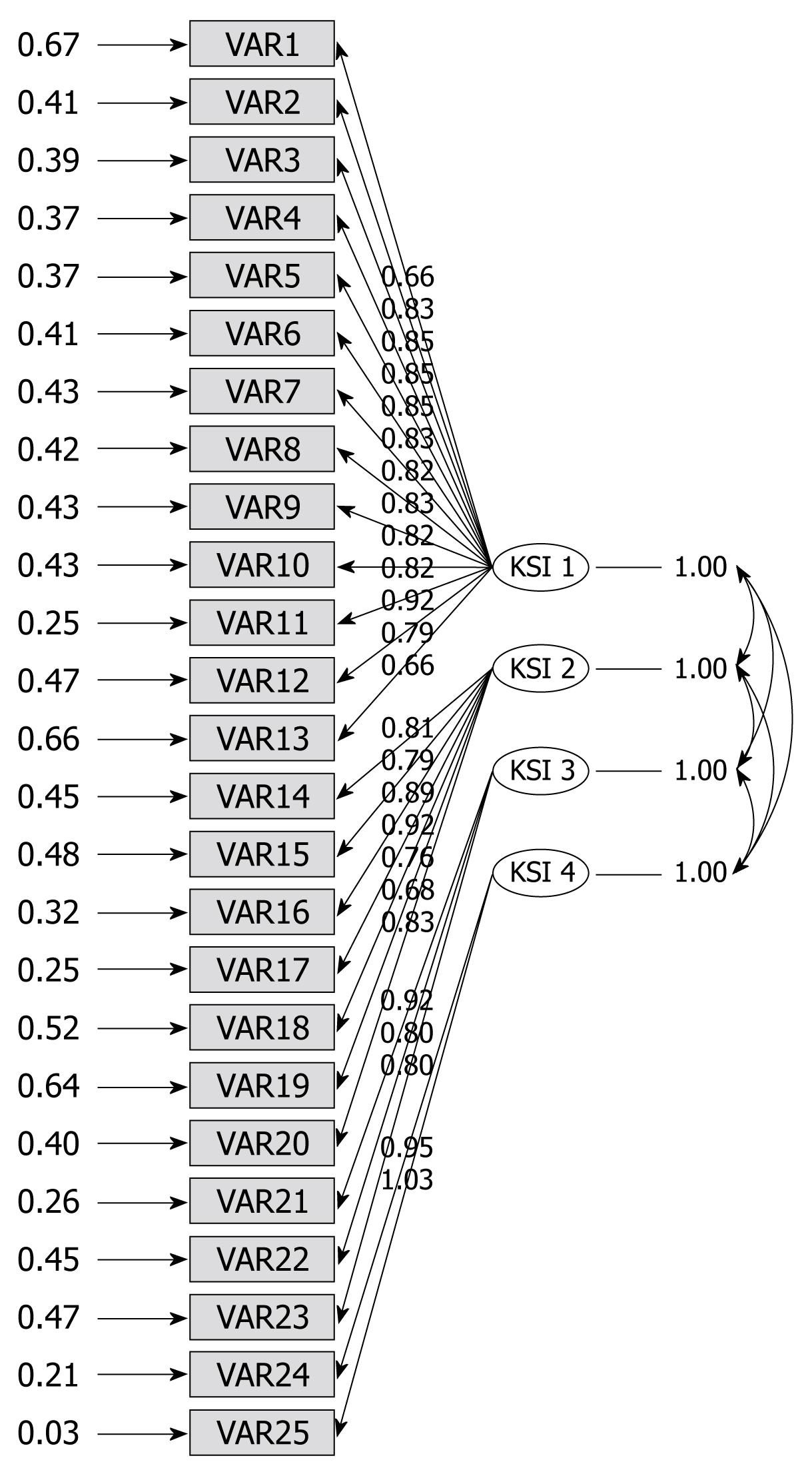 QOL has received increasing attention as more foci are placed on individual satisfaction as an important health outcome in clinical studies. In addition, QOL is particularly significant in diseases lacking of obvious biological or clinical markers, such as FD[2324]. FD greatly affects the QOL of patients. However, treatment of FD is still controversial and no single therapy is uniformly effective, in part, due to the absence of a reliable evaluation instrument.

From our symptom checklist scores, symptoms with the highest scores were discomfort, bloating, and pain or ache in upper abdomen and fullness after eating or slow digestion, all of which are congruent with the main symptoms of FD according to Rome-III criteria[25]. However, heartburn, a major symptom in the Rome-III criteria, had a lower score in our study, possibly due to lack of patient comprehension or lack of adequate explanation by the investigator.

In clinical trials, Leeds dyspepsia questionnaire (LDQ) and MOS 36-item short-form health survey (SF-36) have been applied as an evaluation instrument for FD[26–28]. LDQ is a valid, reliable and responsive instrument for measuring the presence and severity of dyspepsia, but it lacks of QOL assessment[29]. As it is known that, in addition to symptoms, QOL assessment represents a major part of health outcome assessment in clinical studies of FD. However, as different diseases cause different symptoms which necessitate disease-specific H-QOL instruments. SF-36, a generic QOL measurement, contains a large number of questions, the majority of which are often irrelevant to a particular disease. As a result, it may be insensitive to changes in the relevant items due to interference from the irrelevant items. Thus, the evaluation of FD should contain two aspects, namely symptom measure and disease-specific H-QOL assessment. The NDI addresses both aspects.

The original NDI consists of 42 questions, and is shortened to 25 items, excluding those items with a negative response rate of over 60%. The remaining 25 items represent the clinically relevant QOL concepts in subjects with FD[17]. Our study was based on the revised version of 25 items.

In order to maintain the sensitivity of the original version, our questionnaire considered differences in language, cultural diversities, and life style. After our version of the NDI was established, its reliability and validity were evaluated using Cronbach’s α. We found that all domains were above 0.80, demonstrating that our scale has an excellent reliability. Correlation analysis demonstrated that each item had a strong correlation with the corresponding domain, but a weak correlation with other domains, supporting that our questionnaire is valid. In addition, our results are in accordance with the original NDI design, representing superior construct validity. Confirmatory factor analysis also indicated that the CFI was higher than the acceptable level of 0.90[2530], demonstrating that our scale has a good construct validity.

In the past, FD research in China was limited by the absence of a valid assessment instrument for the disease. Our results suggest that the Chinese version of NDI with excellent psychometrics would promote the clinical study of FD and align its medical course in China with international practice in future.

Our study has some limitations, including lack of extensive demographic characteristics, analysis of multi-dimensional factors (such as education, career, financial and social status), “test-retest” in reliability assessment, and discriminating validity in validity assessment, all of which need to be further studied.

Functional dyspepsia (FD) is a common non-organic disease in the world. However, treatment of FD is still controversial, partially due to lack of a reliable evaluation instrument. Since 1998, the Nepean Dyspepsia Index (NDI) has been designed to diagnose FD and proven to be valid in measuring both symptom scores and impairment of dyspepsia-specific health-related quality of life (H-QOL) in FD patients.

In addition to symptom evaluation, assessment of QOL has been recognized to be more and more important in overall health outcome assessment in FD clinical studies. In this study, the reliability and validity of the Chinese NDI translated from it English version which reflects the dyspepsia-specific H-QOL in Chinese FD patients, were assessed.

Studies on validation of NDI for FD in Western countries are widely available. However, NDI has not been translated and validated in China, since much attention is not paid to the effect of FD on the QOL of patients. This is the first study to translate the original version of NDI (25 items) into Chinese and to assess its reliability and validity in Chinese FD patients.

By validating the translated version of NDI, this study may provide researchers, clinicians, and patients with a suitable questionnaire for the assessment of FD.

Reliability is the extent to which the measurements of a test remain consistent over repeated tests of the same subject under identical conditions. Validity, containing construct, content and convergent validity, refers to the degree to which evidence and theory support the interpretations of test scores entailed by proposed tests. Assessment of the validity of a scale involves evaluation of the scale in relation to the desired conclusion on the basis of prevailing standards.