AIM: To estimate the prevalence of the lactase non-persistent genotype (C/C-13910) in a northern Russian population in accordance with ethnicity, and to evaluate self-reported milk consumption depending on lactase activity.

METHODS: Blood samples for genotyping lactase activity, defining the C/T-13910 variant by polymerase chain reaction, and direct sequencing were taken from 231 medical students of Russian origin aged 17-26 years. We analyzed milk product consumption by questionnaire which was specially designed for the estimation of milk consumption and abdominal complaints.

RESULTS: We found that the prevalence of the C/C-13190 genotype in the northern Russian population was 35.6%. The other genotypes nearby C/T-13910 and associated with lactase activity were not present in the study population. The consumption of milk among people with the non-persistent genotype tended to be lower than among the lactose tolerant subjects, but was not statistically significant.

Simoons[4] and McCracken[5] suggested the cultural historical hypothesis to explain the differences in prevalence of hypolactasia. Hence, people with lactase persistence could survive better because they could use all nutrients in milk without having diarrhea. It is possible that they had more children than subjects with hypolactasia. The idea of the calcium absorption hypothesis was proposed by Flatz[6], who suggested that as lactose is a stimulant of calcium absorption, people who consume milk have less rickets, pelvic deformities and more children. This was genetic selection to the benefit of lactase persistence.

Several laboratory methods are used in the diagnosis of hypolactasia. Previously the prevalence of hypolactasia was detected by a lactose tolerance test (LTT) or a lactose tolerance test with ethanol (LTTE)[78]. The “gold standard” which can be used as a reference method is the direct determination of lactase activity in the small intestinal mucosa, taken by biopsy; however, the invasiveness of the test does not allow its use in everyday practice and screening[7]. In 2002 the genetic variant associated with adult-type hypolactasia, a one base polymorphism C/T-13910 (rs 4988234) upstream of the lactase coding gene on chromosome 2 was identified. The C/T-13910 variant is located in the OCT-1 binding site and acts as an enhancer[9]. The variant is inherited recessively so that the C-13910 allele in a homozygous form (the C/C-13910 genotype) is always associated with adult-type hypolactasia and the T-13910 allele (C/T and T/T-13910 genotypes) with persistent lactase activity[10]. The specificity of the genetic test is 100% with a sensitivity of 93% in subjects older than 12 years[11]. In addition, several other suggested variants (C/G-13907, T/C-13913, T/G-13915 and G/C-14010) nearby the C/T-13910 variant were identified in African and Middle Eastern populations[12–14]. Of these variants, 13915 T/G and 14010 G/C are associated with lactase persistence[1214].

Genotyping has been used in only two Russian studies[2122] which showed that the prevalence of hypolactasia among Russians living in the central part ranged from 36% to 50% and depended on the area of residence[22].

The main hypothesis of the current study was that people with the C/C-13910 genotype will avoid using milk or their milk consumption will be less compared to those with the lactase persistent genotype.

The objective was to estimate the prevalence of the lactase non-persistent genotype in a northern Russian population of students from the Medical University of Archangelsk. We determined the frequency of the C/T-13910 variants in accordance with ethnicity and estimated self-reported milk consumption and its relationship to the C/T-13910 genotypes.

The study was performed in collaboration with the Department of Family Medicine, Northern State Medical University (NSMU), Archangelsk, Russia, the Department of Medical Genetics, University of Helsinki and the Department of General Practice, University of Tampere. The study was approved by the Ethics Committee of NSMU (No. 08/06 from 29.11.2006). Medical students from different faculties aged 17 to 26 years were enrolled into the investigation. All subjects gave written informed consent and completed a questionnaire on their personal data, self-reported health status, milk consumption habits, ethnicity and their place of birth as well as their parents’ and grandparents’ place of birth. Blood samples were taken from 241 students. Of these, 231 reported their origin as Russian; but, according to the origins of grandparents (at least three out of four grandparents) only 149 were considered to have Russian ethnicity. Of the others, 61 did not report the data on grandparents and these subjects were classified as “missing information” on ethnicity. Twenty one students who reported their origin as Russian had at least 2 grandparents with another origin mostly Ukranian, but also Byelorussians, Komi, Mordvinian and others. Final analysis of the prevalence of the C/C-13910 genotype was based on one of three subgroups: Russians, the group with missing data on grandparents and the mixed origin group (Table 1). We included students who were chosen by random methods from four main faculties of the university in the investigation. Randomization in our study was done according to standard rules. The NSMU has 16 faculties and each of them has 10 to 12 groups of students. We took every third group of students according to an official list from every fourth faculty. As a result we received 176 students chosen by a random method. The remaining 65 were taken at an annual medical review. Although that sample was not random, there was no selection because every student who attended medical review during a certain time (while we were collecting the material) was taken. Age and sex do not affect gene frequency.

The number of students and the selection process are presented in Figure 1. The majority of students (155 of 231) who participated in the study were born in the Archangelsk region, the others were born in different regions of north-west Russia (Figure 2). 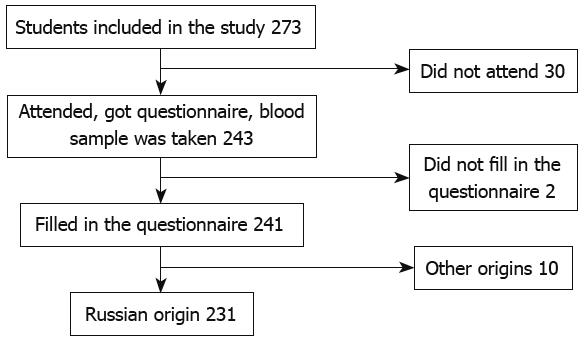 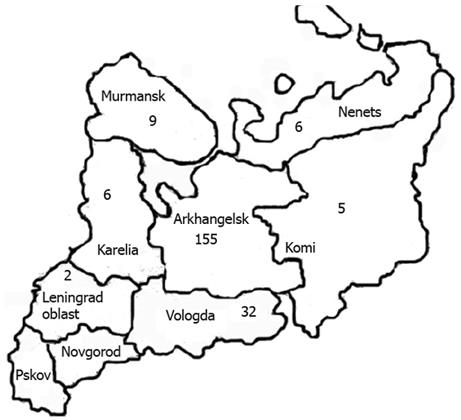 We used the questionnaire designed by Sahi[3] with some modifications in the present study. Milk consumption was estimated using questions about milk and sour milk consumption. For comparison, we divided all subjects into two groups (Table 2). The first group consisted of students who were consumers of milk regardless of amount (answer “Yes” in Table 2) and the second group consisted of those who never consumed milk (answer “No” in Table 2).

DNA was amplified by polymerase chain reaction (PCR). We used Taq polymerase (Dynazyme, Finnzymes, Espoo, Finland) with the conditions described elsewhere. The used forward primer was 5'-CCTCGTTAATACCCACTGACCTA-3' and the reverse primer was 5'-GTCACTTTGATATGATGAGAGCA-3' which covered about 400 bp regions on both sides of the C/T-13910 variant. The PCR product was verified by 1.5% agarose gel electrophoresis (with ethidium bromide). The PCR products were purified using shrimp alkaline phosphatase (USB) and exonuclease I (New England Biolabs) at 37°C for 60 min and at 80°C for 15 min.

The Chi-square test was used to test the difference between groups of genotype in milk consumption. P < 0.05 was considered statistically significant.

Among subjects with lactase non-persistence (C/C-13910 genotype) more than half (63.1%) did not consume milk at all compared with those with the C/T-13910 variant (49.6%). The differences in milk consumption between lactose persistent subjects (C/T and T/T variants together) and those with hypolactasia (C/C-13910 genotype) was not statistically significant (P = 0.094).

The consumption of sour milk did not have a significant effect within the group of “non-consumers”; but, subjects with the C/T- and the T/T -variants consumed sour milk relatively more often than subjects with the C/C-13910 genotype (59.3%, 64.7% and 48.8%, respectively). The sour milk consumption among lactose non-persistent subjects (C/C-variant) and lactase persistent subjects (C/T- and T/T- variant together) was not statistically significant (P = 0.084).

All 5 persons who consumed milk products in relatively greater amounts (3 and more glasses per week) had the lactase persistent genotype.

We estimated the gastrointestinal symptoms among subjects with lactase persistent and non-persistent genotypes. However, differences in the frequencies of symptoms were not statistically significant.

The prevalence of adult-type hypolactasia among Russians is in accordance with previous investigations and varies from 13% to at least 50%[15–172122]. The majority of previous studies were performed using the lactose tolerance test, and only two of the recent studies performed in Russia[2122], used the same direct genotyping we used in the present investigation. However, these researchers studied the frequency of the lactase persistent/non-persistent genotype among other populations living in the territories of Russia, but did not estimate the milk consumption.

Genetic testing is a direct method of diagnosing adult-type hypolactasia, and is not confounded by environmental factors which may affect the results of the other tests. Therefore the results of this study specify the actual prevalence of adult-type hypolactasia in Russia. An investigation into the lactose persistent genotype among a northern Russian population has not been performed before.

Since the variants (C/G-13907, T/C-13913, T/G-13915 and G/C-14010) nearby C/T-13910 were previously associated with lactase activity in southern parts of the world and were not present in this study, it is possible that these variants are not responsible for the regulation of lactase activity in north-west Russia. This is in agreement with results obtained from other countries in northern Europe[2324].

More than half of the study subjects did not drink milk and almost 45% did not drink sour milk at all. The great majority of “milk-consumers” drank very small quantities of milk, 1-2 glasses or less per week. Apparently, this is a habitual feature of the subjects in the study population and it did not depend on genotype. However, those five persons who drank the most milk had the lactase persistent genotype. Our data on the consumption of sour milk confirmed the results of previous studies which showed that people with lactose intolerance are more able to tolerate fermented milk because lactose in these products is reduced by 30%-40%[25].

The prevalence of adult-type hypolactasia (primary lactose malabsorption, lactase non-persistence) varies considerably between different races and populations. Data on the prevalence of hypolactasia from previous studies performed in the territories of Russia are limited especially for northern Russian populations. Moreover, the majority of these studies were performed using other methods. The inheritance of primary lactose malabsorption is controlled by a single recessive autosomal gene and genotyping allows us to determine the true prevalence of the lactase persistent/non-persistent gene. Thus, the prevalence of adult-type hypolactasia among the current population becomes obvious. The hypothesis that the lactase non-persistent genotype can affect milk and sour milk consumption has not been tested before in a northern Russian population.

This was the first time that genotyping of the lactase persistent gene was performed in a population from north-west Russia and an estimation of milk products consumption according to genotype was performed.

In previous studies, the prevalence of lactase malabsorption among Russians has been found to vary between 13% and 57% according to different authors and the different methods used. Many studies were carried out in other populations living in the territories of Russia where there was great variation in the prevalence of lactose malabsorption, from 11% to 94%. Genotyping has a specificity of 100% and a sensitivity of 93%. Genetic methods have been used before in only two Russian studies which showed the prevalence of hypolactasia among Russians living in the central part to range from 36% to 50% depending on the area of residence. An estimation of the lactase non-persistent genotype affecting milk and dairy milk product consumption in a northern Russian population has not been done before.

The study results suggest that the prevalence of the lactase non-persistent genotype in a northern Russian population is 35.6% which is more than that in northern Europe and less than that in southern Europe. This prevalence confirms the historical hypothesis of lactase malabsorption. However, the genotype does not affect milk and sour milk consumption among northern Russians which could be a result of relatively low milk product consumption among the entire study population.

This manuscript has potential for contribution regarding genetic subtypes and milk intolerance.