AIM: To investigate the protective effect of melatonin on liver after intestinal ischemia-reperfusion injury in rats.

CONCLUSION: Exotic melatonin can inhibit the activity of ALT, AST and TNF-α, decrease the accumulation of MDA, and depress the expression of ICAM-1 in liver after intestinal IR injury, thus improving the liver function. 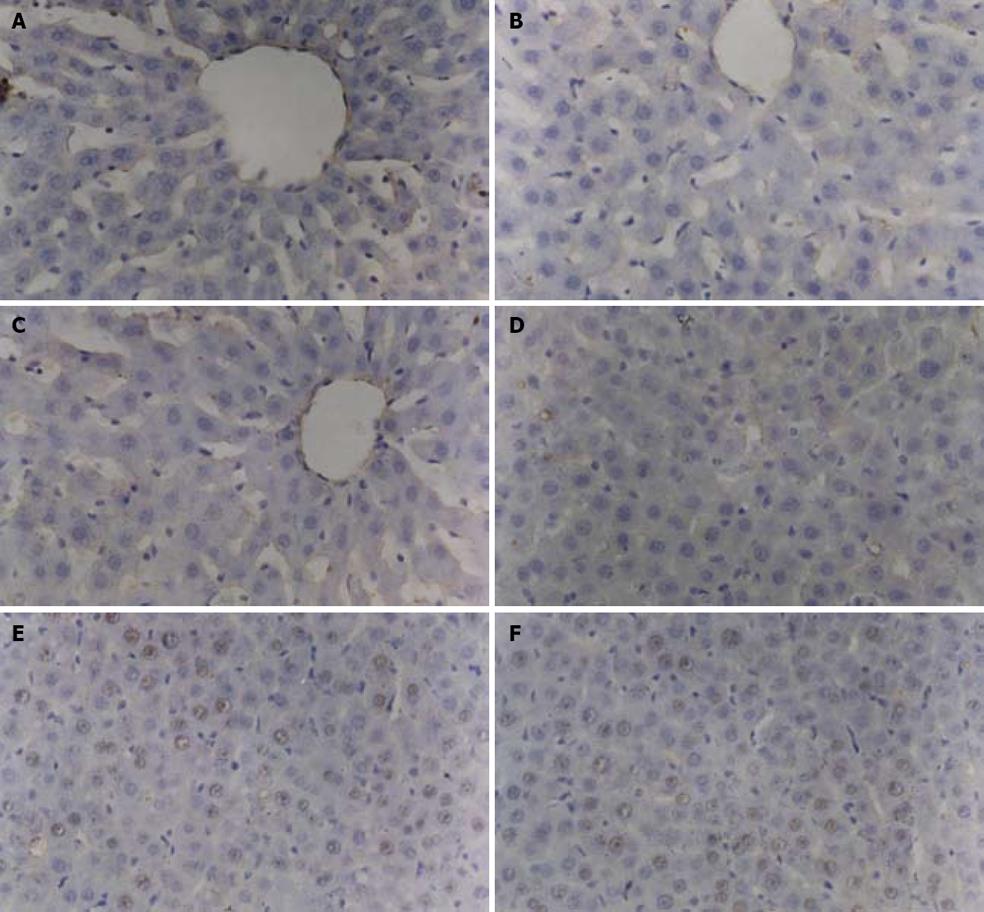 One hundred and fifty healthy male Wistar rats, weighing 190 to 210 g, aged 6-7 wk, were randomly allocated into melatonin disposure group, alcohol solvent control group and normal saline (NS) control group. All rats were raised for at least 1 wk before operation in a 12 h dark and 12 h light cycle, with free access to food and water. One gram of melatonin (Sigma Company, USA) was dissolved in alcohol solvent (40%) and kept at a sub-ambient temperature. Rats in the melatonin exposure group received 20 mg/kg intra-peritoneal melatonin diluted by NS to 1/10 of the incipient concentration 30 min before intestinal IR. Rats in the alcohol solvent control group received the same concentration of alcohol and NS. Thiopental sodium (40 mg/kg) was injected into biceps femoris of rats 45 min before the intestinal IR model was established. A model of pan-small intestinal IR injury was established by occlusion of the superior mesenteric artery (SMA) for 30 min. Serum samples were collected from rats in each group after reperfusion for 0.5, 1, 6, 12 and 24 h. A paraformaldehyde (PFA, 40 g/L) phosphate buffer (0.1 mol/L, pH = 7.3) was provided by Laboratory of Shengjing Hospital, China Medical University (Shenyang, China). Correlated biochemical agents were bought from Boehringer Mannheim Company in Germany. MDA kits were purchased from Nanjing Jiancheng Biological Engineering Research Center. TNF-α kit was bought from Shenzhen Jingmei Biological Engineering Limited Company (China). ICAM-1 kit was purchased from Serotech Company in UK. OLYMPUS-BX60 optical microscope and photograph system, HITACHI-7600A automatic biochemistry analyzer and SAKURA paraffin section cutter, were provided by Laboratory of China Medical University (Shenyang, China).

Blood was obtained by trans-diaphragmatic cardiac puncture, each sample was centrifuged for 5 min at 3000 r/min with the clear supernatant remained. ALT and AST were detected with an automatic biochemistry analyzer. Serum TNF-α was determined by ELISA. MDA in liver tissue homogenate obtained from the central part of medial lobes was assayed by colorimetry. ICAM-1 in liver cells was tested by immunohistochemistry and observed under an optical microscope. Cells (including endotheliocytes in liver sinusoid and hepatocytes) with fine yellow particles in cytoplasm were defined as positive. The number of ICAM-1 positive cells per one high power field was calculated, the mean value was expressed as mean ± SD. All parameters were analyzed by variance analysis and SNK test using SPSS 13.0.

Serum ALT and AST levels are generally accepted as the most sensitive indexes of acute hepatic injury and AST appears at the later phase[7]. After reperfusion, the ALT levels in the three groups gradually decreased with the time and were lower in the melatonin exposure group than in the other two control groups (P < 0.05), while AST level gradually increased with the time and maintained at its original level in the melatonin exposure group (P < 0.05, Table 1). Hepatic injury occurred at the early stage of pan-intestinal IR SMA was blocked for 30 min. The possible reason is that indirect clipping SMA reduced the portal blood flow. The accrescence of ALT indicates the hepatic injury, but the ischemic time is too short to lead to prominent AST changes. After the block of SMA was released, the hepatic injury due to reduced blood flow was ameliorated, but a great amount of active substances, such as free radicals, TNF-α, ICAM-1, etc, entered hepatic tissues via superior mesenteric and portal veins leading to secondary hepatic injuries, which can explain the variable curves of ALT and AST in the other two control groups. Compared with the other two control groups, exogenous melatonin could ameliorate the hepatic function after intestinal IR injury at the early or late phase. Recent studies about the protective effect of melatonin on IR injury in various organs showed that melatonin can eliminate free radicals, inhibit release of inflammatory media and apoptosis[8-10]. On the other hand, many factors can result in IR injury, such as free radicals[11], overload of calcium[12], inflammation of white blood cells and vascular endothelial cells[13] and apoptosis, etc[14]. Therefore, we detected serum TNF-α, MDA and ICAM-1-stained cells in liver tissues in this study. TNF-α gradually increased during the first 12 h after reperfusion and then decreased when it reached its peak between 12 and 24 h in the three groups. However, the TNF-α level was lower in the melatonin exposure group than in the other two control groups 12 and 24 h after reperfusion (P < 0.05), suggesting that TNF-α increases in systemic circulation after pan-intestinal IR, which can be effectively inhibited by exogenous melatonin[15-17]. Furthermore, TNF-α is generally accepted as an important inflammatory medium which has the same position as the interleukin family, and participates in almost all inflammatory reactions[18,19]. According to the curves of TNF-α and AST in the first 12 h systemic circulation after reperfusion, the secondary hepatic injury after pan-intestinal reperfusion is related to the concentration of TNF-α in systemic circulation. MDA is a final product of lipid peroxide, and its concentration in tissues can directly reflect the extent of lipid peroxide injury[20]. The concentration of MDA in each group gradually increased after reperfusion, which is generally considered the result of generous release of free radicals and accumulation of lipid peroxide products after pan-intestinal IR[21]. However, the concentration of MDA was obviously lower in the melatonin exposure group than in the other two control groups 6, 12 and 24 h after reperfusion, indicating that melatonin can relieve the IR injury by eliminating free radicals[22]. It was reported that ICAM-1 is directly correlated with the inflammation of white blood cells and vascular endothelial cells[23]. In this study, ICAM-1 gradually increased after reperfusion and decreased after reaching its peak between 12 and 24 h, which was in accordance with the concentration of TNF-α in systemic circulation. However, ICAM-1 was obviously lower in the melatonin exposure group than in the other two control groups. Analysis of the data showed that after clipping SMA for 30 min, (1) the first hepatic injury was relatively mild and reversible while the secondary injury was permanent and severe; (2) a large number of free radicals induced the expression of inflammatory factors such as TNF-α and ICAM-1 leading to hepatic injury through the portal vein, and free radicals directly caused peroxide injury after reperfusion; (3) exogenous melatonin protected liver from intestinal IR injury by inhibiting the production of free radicals, reducing the concentration of TNF-α in systemic circulation, and suppressing the expression of ICAM-1 in liver, etc. It has been recently shown that liver is the final metabolic place of melatonin and melatonin protects liver from intestinal IR injury[24-26]. Studies have shown that melatonin has no side effect when a large dose is used[27,28]. Intestine can absorb nutrients and has immune functions, and its vascular anatomy is specifically related with liver, the biggest digestive gland in human body. Since the blood in intestinal vein goes through the portal vein to the liver, intestinal IR inevitably affects the normal physical function of liver. During IR, a great amount of xanthic dehydrogenase in intestinal mucosa would change into xanthic oxydase, and xanthic oxydase can induce the production of free radicals which enhance the expression of adherence factors such as ICAM-1. These adherence factors are the main etiological agents of the secondary hepatic injury[29]. Up to now, rejecting reaction, graft-versus-host disease (GVHD) and infection are the restrained factors for intestine transplantation[30].

In conclusion, IR is the key mechanism underlying liver injuries at the early stage of organ transplantation.

Melatonin is an effective free radical scavenger in liver, kidney, pancreas, digestive tract, etc. It is generally accepted that melatonin plays a role in protecting liver from intestinal IR injury by eliminating free radicals in cytoplasm. Thus, melatonin secreted by conarium is an endocrine hormone and has a very complicated mechanism of action and its receptors are distributed in almost all human organs. At present, researchers are paying their attention to the modulating function of melatonin in various inflammatory media.

Melatonin interferes with hepatic injury after intestinal reperfusion. The possible protective mechanism of melatonin by producing and releasing inflammatory agents was discussed. Melatonin was found to be able to reduce the concentration of serum TNF-α and inhibit the expression of ICAM-1.

Exogenous melatonin can protect liver from intestinal IR injury after intestinal ischemic-reperfusion by eliminating free radicals, reducing the production and release of inflammatory media, etc. As an effective and safe clinical medicine, it can be extensively used in surgery.

Melatonin is an endocrine hormone secreted by conarium. Endogenous melatonin plays an important role in organic biorhythm, developing cycle, internal environmental stabilization and anti-caducity. TNF-α is an important inflammatory medium and participates in almost all inflammatory reactions. ICAM-1 is a member of the adhesive molecule family and is closely related to adhesion of neutrophile granulocytes and vascular endothelial cells in inflammatory reaction.

This is a well written and interesting manuscript. The authors demonstrated that melatonin can protect liver from intestinal IR injury by abating the concentration of serum TNF-α and inhibiting the expression of ICAM-1 in liver cells.