METHODS: Retrospective chart review of 5639 patients followed at St. Luke’s-Roosevelt Hospital HIV Clinic (Center for Comprehensive Care) in New York City, USA from January 1999 to May 2007. The following demographic characteristics were analyzed: age, sex, race and HIV risk factors. A multiple logistic regression analysis was performed to evaluate the influence of demographic factors on acquisition of these viruses.

CONCLUSION: Our study demonstrates that co-infection with HBV/HCV/HIV is significantly associated with IDU. These results highlight the need to intensify education and optimal models of integrated care, particularly for populations with IDU, to reduce the risk of viral transmission. 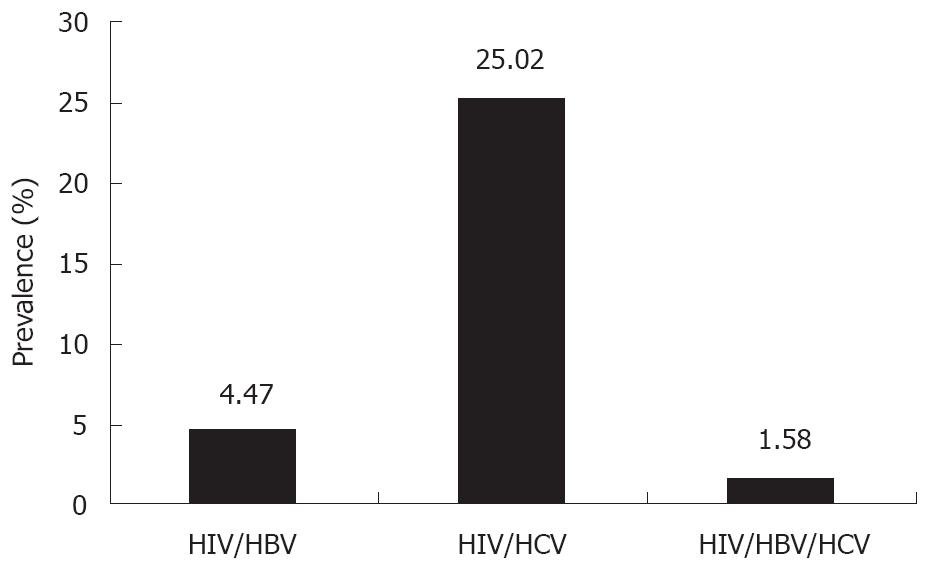 Figure 1 Prevalence of HIV and HBV and/or HCV co-infections (%). 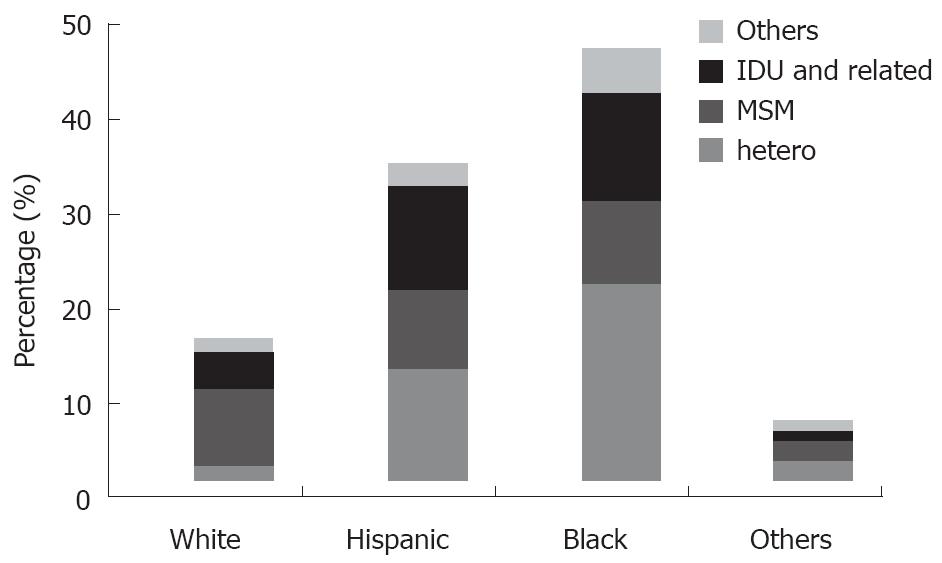 Co-infection with hepatitis B virus (HBV) or hepatitis C virus (HCV) in patients infected with human immunodeficiency virus (HIV) is common and well-recognized worldwide, as they are blood-borne pathogens that share similar routes of transmission, such as intravenous drug use (IDU), sexual contact, percutaneous exposure, or from mother to child during pregnancy or birth[1]. The Joint United Nations Programme on HIV/AIDS (UNAIDS) and the World Health Organization estimate that 1.2 million people live with HIV in the United States of America (US)[2]. Among HIV-infected patients studied from Western Europe and the US, chronic HBV infection has been found in 6%-14%, while chronic HCV has been found in approximately 33%[3,4]. Co-infections of HBV or HCV with HIV have been associated with increased risk of antiretroviral-therapy-related hepatotoxicity and increased risk of progression to liver disease, which is a major cause of morbidity and mortality in HIV-infected patients[5-8]. It is well known that in the US and Europe, HIV/HBV co-infection is linked most often to sexual intercourse [both heterosexual and men who have sex with men (MSM)], followed by IDU, while HIV/HCV co-infection has predominantly been associated with a non-sexual parenteral route of transmission of blood or blood products, particularly IDU[9-13]. Although the rate of HBV and/or HCV co-infection in HIV patients varies according to geographic region and various risk groups, there is limited data on the prevalence and risk factors associated with triple infections with HIV/HBV/HCV in an urban clinic population. Therefore, we investigated the co-infection patterns of HBV and HCV among HIV-infected patients coming to a HIV clinic located in New York City, to determine the prevalence and risk factors associated with triple infections with HIV/HBV/HCV.

We conducted a retrospective chart review of 5639 patients followed in two HIV/AIDS clinics that comprise the Center for Comprehensive Care at St. Luke’s–Roosevelt Hospital in New York City. The study period was from January 1999 to May 2007. All patients were HIV-infected and were analyzed for hepatitis B surface antigen (HBsAg) and HCV antibody, along with demographic characteristics and risk factors for HIV acquisition.

The tables describe the distribution of co-infections among HIV-infected patients according to several characteristics. The χ2 test was performed in order to investigate the association between the presence of HIV/HBV/HCV co-infections and demographic variables. The Fisher exact test was used where applicable. In order to identify factors associated with HIV/HBV, HIV/HCV and HIV/HBV/HCV co-infections, three multiple logistic regression analyses were performed to determine odd ratio (OR) and 95% confidence interval (CI). The level of statistical significance was fixed at P = 0.05. The statistical analysis was performed using the statistical software SPSS 15.0 for Windows (SPSS, Chicago, IL, USA).

Our clinics serve a large number of diverse HIV-infected populations in New York City. Most of our patients are men, black and Hispanic, which reflects the national epidemic of HIV infection[2]. In our study period of 8.5 years and the review of 5639 HIV-infected patients, as Figure 1 shows, the prevalence of HIV/HCV co-infection was remarkably high, at 25.02%. Co-infection with HBV was not uncommon, at 4.47%, and triple co-infected patients with HIV/HBV/HCV were not rare either, at 1.58%.

The results of the present study are consistent with previous studies conducted in urban HIV/HBV or HCV co-infected populations in the US and Western Europe[14,15].

In our study, HIV/HBV co-infection was more likely associated with male gender, black race and MSM, but less likely associated with IDU, and IDU plus heterosexual activity, than with heterosexual reference. These results are consistent with previous studies, demonstrating that HIV/HBV co-infection is highly linked to sexual intercourse, including MSM.

In our study, HIV/HCV co-infection was significantly associated with male gender, IDU, IDU plus heterosexual activity, IDU plus MSM, and transfusion, but less likely associated with black race and MSM than heterosexual reference. These results are in agreement with previous reports that HCV is not efficiently transmitted by perinatal or sexual exposure, which are major modes of transmission for HBV and HIV. HCV is predominantly found in persons who have had percutaneous exposure to blood products and IDU in particular[16]. Even though we did not analyze patients for unsafe sexual practices, recent evidence shows increased incidence of HCV infection in MSM population who do not use condoms, especially young individuals, and in the heterosexual population who report multiple sexual partners[17]. 10.5% and 20.2% of our HIV/HCV co-infected patients are MSM and heterosexual, respectively. Not counting for other possible risk factors, sexual acquisition of HCV is likely very important in HIV-infected MSM and heterosexual individuals with multiple partners.

The prevalence of triple infection with HIV/HBV/HCV in our cohort was 1.58% and significantly associated with male gender, IDU, IDU plus heterosexual activity, and IDU plus MSM. Our results demonstrate that IDU is the most important factor associated with triple infections with HIV/HBV/HCV in urban HIV-infected populations. Therefore, the study results highlight the need for special attention to populations with IDU for screening viral co-infections with HIV and HBV/HCV.

Interestingly, among intravenous drug users, we found that the prevalence of IDU in heterosexuals was significantly higher than that of MSM with a history of IDU in HIV/HBV/HCV and HIV/HCV co-infected patients (14.6% vs 5.6% P < 0.001, 11.7% vs 4% P < 0.001), which is consistent with previous studies conducted in the US[18,19]. This could be explained by fewer high-risk IDU practices, such as needle sharing, among MSM in our cohort, although IDU behavior was not assessed in our study. As Figure 2 illustrates, overall IDU-related prevalence in our cohort was 26.49%, 32.14%, 24.31% in white, Hispanic and black ethnic groups, respectively. Our findings contrast with recent data, in which blacks were more likely to inject than whites, while Hispanics and whites had similar injecting rates[20]. This indicates another example of considerable variations in disparities of IDU in ethnic groups in large urban US cities.

The HIV/AIDS epidemic in the US affects ethnic and racial groups disproportionally. This was clearly depicted in our study. Co-infection with hepatotropic viruses shows similar trends. Physicians who care for patients with HIV/AIDS should be vigilant to frequently screen for these infections and vaccinate for hepatitis A and B when appropriate. Also, our study demonstrates that co-infection with all three viruses, HIV/HBV/HCV, is significantly associated with IDU. These results highlight the need to intensify risk reduction education, such as needle exchange programs, safe sex programs, and optimal models of integrated care, particularly for populations with IDU, to reduce the risk of viral transmission of HIV and hepatotropic viruses.

To investigate epidemiological characteristics of triple co-infected patients with HIV/HBV/HCV.

This study demonstrates that triple co-infections with HIV/HBV/HCV are significantly associated with IDU. Therefore, education and integrated care, particularly for populations with IDU, would help reduce the risk of viral infections.

This is an interesting paper. The authors demonstrated that co-infection with all three viruses, HBV/HCV/HIV, is significantly associated with IDU. These results highlight the need to intensify education and optimal models of integrated care, particularly for populations with IDU, to reduce the risk of viral transmission.