AIM: To study the relationship between quantitative structure and pharmacokinetics (QSPkR) of fluoroquinolone antibacterials.

METHODS: The pharmacokinetic (PK) parameters of oral fluoroquinolones were collected from the litera-ture. These pharmacokinetic data were averaged, 19 compounds were used as the training set, and 3 served as the test set. Genetic function approximation (GFA) module of Cerius2 software was used in QSPkR analysis.

CONCLUSION: QSPkR models can contribute to some fluoroquinolones antibacterials with excellent pharmacokinetic properties.

H pylori is generally considered to be the most important cause of peptic ulcer diseases, gastric adenocarcinoma and mucosa-associated lymphoid tissue (MALT) lymphoma of the stomach[1]. The widespread use of antibacterial therapy is suggested to be the cause for the decline in the prevalence of H pylori infection[2]. Among the different types of antibacterial agents, the effects of fluoroquinolones are better and have attracted much attention. Unfortunately, complete eradication of H pylori is still in the initial stage, especially in South East Asia and Southern Europe, where resistance to antibiotics has become more prevalent[3]. It is therefore important to search for better antibacterial agents against resistant H pylori strains[4].

Successful drugs must have suitable properties in toxicity, bioavailability and pharmacokinetic parameters. Screening of a large number of compounds with excellent absorption, distribution, metabolism, and excretion (ADME) properties is time-consuming and expensive[5]. So the extension of the idea of quantitative structure-activity relationship to the pharmacokinetics has led to the emergence of a new tool called the quantitative structure pharmacokinetic relationship (QSPkR) studies. QSPkR studies can be utilized at early stages of drug design. Both one- and two-dimensional topological indices have been used extensively to numerically relate molecular structure with activity[6]. These descriptors rely only on the molecular graph for their calculation. In contrast, three-dimensional descriptors require the absolute conformation of a molecule, and have been successfully used to develop QSPkR analysis[7].

After examining the structures of all marketed fluoro-quinolones, we found that their diversities in structures were mainly within R1 and R7 (Figure 1). Considering the connections between the groups (R1 and R7) and matrix were single bonds, the conjugations between groups and matrix were limited, and the groups had relatively independent properties. To simplify the design for high efficiency in practice, the properties of fragments were applied as the descriptors of calculation. In this study, a two-step process was used to develop QSPkR models clinically using fluoroquinolone antibacterials. The first step was to calculate properties related to chemical structures and their conformation, especially constituent structures. These properties include 2D descriptors representing physical properties (logP), 3D descriptors (volume), and quantum chemical parameters (polarizability). After calculating these properties, the QSPkR models were developed by multivariate linear regression based on genetic algorithms. 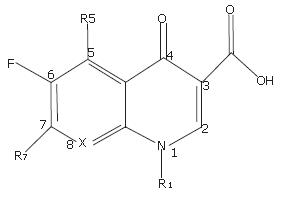 Figure 1 The matrix of all fluoroquinolone antibacterials.

All 22 compounds used in this study are analogues of the fluoroquinolone antibacterials which are widely used clinically except DW116 (No.5). The matrix of the compounds is shown in Figure 1, and their detailed substituents are listed in Figure 2. 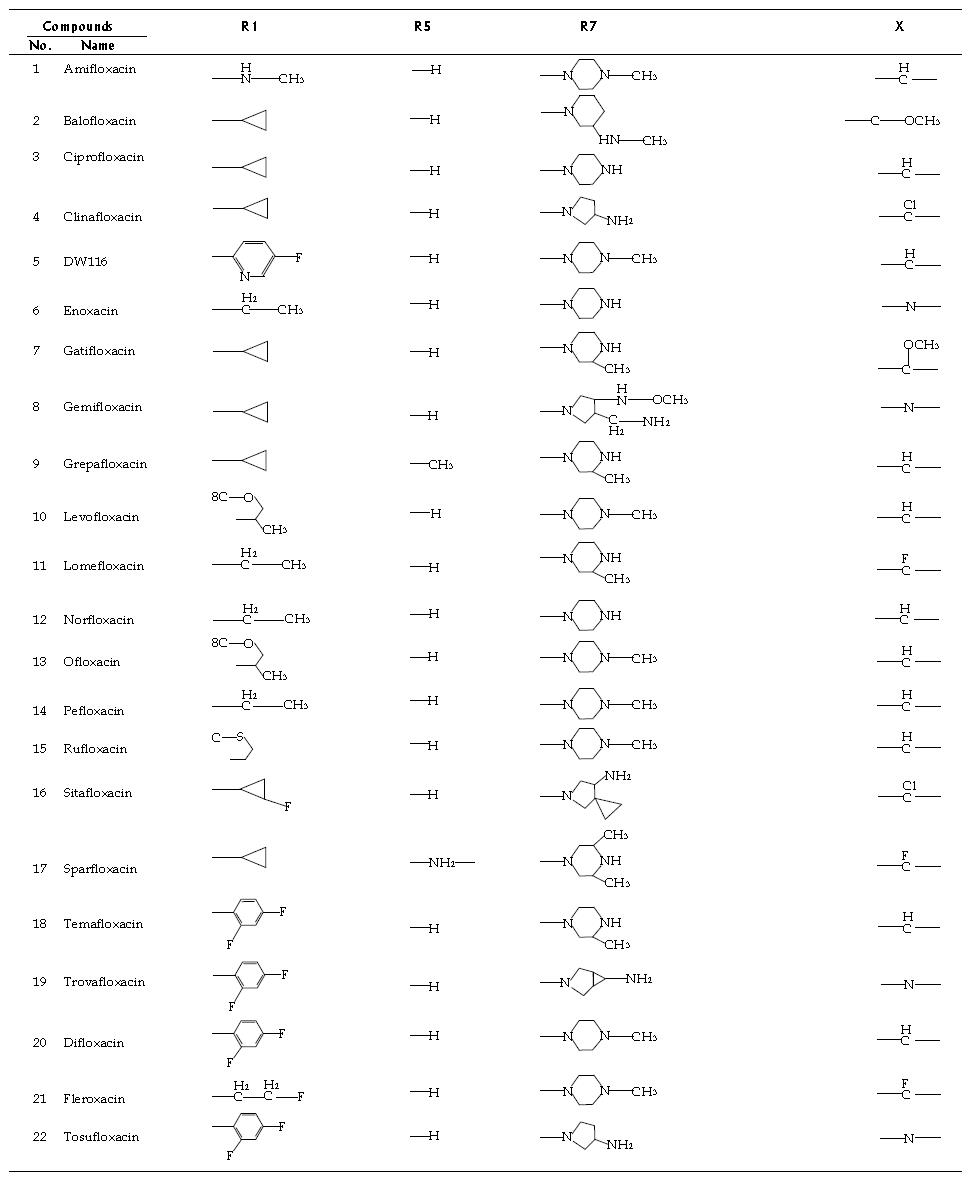 The PK parameters of these fluoroquinolones were collected from literature[9-68]. Data were taken from the studies of oral fluoroquinolones. These pharmacokinetic data were averaged after AUC and Cmax data were normalized by 100 mg of drugs (Table 1). t1/2 in this paper is elimination half life, it is also known as t1/2(®). Nineteen compounds were used as the training set, and the others served as test set.

The 3D structure of each compound was constructed by HyperChem 7.0 (Hypercube Inc., USA) and then optimized with MM+ force field. All molecules were aligned by minimizing the rms distance of their matrix by SYBYL 7.0 (Tripos Inc., 2004). The alignment of molecules is displayed in Figure 3. The descriptors were calculated for substituents R1 and R7 by HyperChem 7.0. The definitions of all descriptors are shown in Table 2. 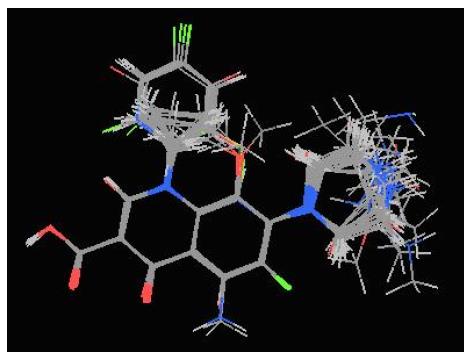 The logarithmic values of the PK parameters were used as the dependent variables. All the descriptors were scaled by the mean values of data from the training set .

The models related to three dependent variables [ln(AUC), ln(t1/2) and ln(Cmax)] and 14 independent variables were built respectively according to the data of the training set. To obtain a high quality of QSPkR models, genetic algorithms (GA) and partial least squares analysis (PLS) were used in calculation. The calculation was conducted with the QSAR module of Cerius2 (Accelrys Software Inc.) molecular modeling software.

We selected three and four independent variables to search their best models. QSPkR analysis based on GA began with a population of random models. These models were generated by randomly selecting three or four features from the data file. Product of multiple linear regression coefficient and leave-one-out cross-validation coefficient was used as a fitness function to generate the fitness scores of these models. For this data set 200 populations were used, and the number of elite populations was 100. The genetic operator was applied until the total fitness score of the elite populations could not be improved over a period of 30 crossover operations. The convergence criteria was met after 430 operations for four features and 280 operations for three features.

The data of the left test set were then predicted by these models.

The descriptors were calculated for substituents R1 and R7 by HyperChem 7.0. And their values are displayed in Tables 3 and 4. 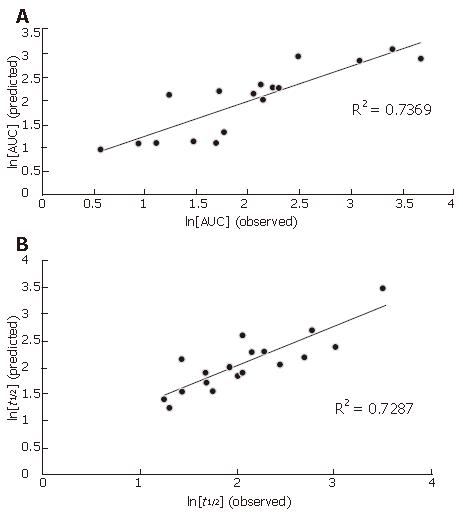 Figure 4 The comparison of the predicted and observed ln(AUC) (A) and ln(t1/2) (B).
Fitted models

The GA calculation gave 100 models for each pharmacokinetic parameter. The models with the best fitness are listed in Table 5. Results showed that GA was a powerful tool to find the best models. Maximum R2 of models based on ln(Cmax) was only 0.327. Therefore, these models might not be significant. That is to say these 14 descriptors were not correlated with Cmax.

All the predicted and observed data of ln(AUC) and ln(t1/2) from the training set are displayed in Figure 4.

We normalized the data of all the descriptors before model construction, making the coefficient of all the descriptors comparable in the same model. In the model based on AUC, coefficient of V7 was the largest and negative, and that of HE7 was quite small, suggesting that the substituents at position 7 are very significant to AUC, and small volume, large polarizability and large surface area substituents at C-7 are preferred, while hydration energy has little influence on AUC.

In the t1/2-based model, coefficient of V1 was the largest and negative, but that of P7 and HE7 was quite small, suggesting that the substituents at position 1 are significant to t1/2, large polarizability and small volume of substituents at N-1 are therefore preferred.

The AUC and t1/2 data of test set (Table 6) were predicted by models displayed in Table 5.

The ln(AUC) values predicted by the model correlated well with the observed ln(AUC) values for the training data set with correlation coefficient (R2) equal to 0.7369 (Figure 4A). In addition, application of the model to an external test data set consisting of 3 compounds demonstrated that the model-predicted AUC values were approximate to the observed AUC values (Table 6), indicating that the constructed model is valid for AUC.

The ln(t1/2) values predicted by the model also correlated well with the observed ln(t1/2) values for the training data set with correlation coefficient (R2) equal to 0.7287 (Figure 4B). In addition, the model-predicted t1/2 values were approximate to the observed t1/2 values (Table 6), indicating that the constructed model is also valid for t1/2.

These models may be used to predict the pharmacokinetic parameters (AUC and t1/2) of untried fluoroquinolones. But residual values between predicted and observed data of the test set are slightly larger especially for AUC. It is mainly due to non-precise pharmacokinetic data. Although all the pharmacokinetic data obtained from the literature were averaged, they were not precise enough to get excellent models. The other reason is that we only considered diversities within R1 and R7 to simplify the models. These models however, are very useful as in-silicon prefilters of fluoroquinolone compounds in virtual high throughput screening. And qualitative analysis of substituents at N-1 and C-7 may contribute to guide design of novel fluoroquinolones with excellent pharmacokinetic properties

In conclusion, this model can contribute to a series of fluoroquinolone antibacterial drugs with excellent pharmacokinetic properties for complete eradication of H pylori.

We thank Shandong University (Shandong, China) for allowing us to use the Cerius2 molecular modeling software (Accelrys) and Hypercube Inc. for providing us HyperChem 7.0 Evaluation for Windows (download from http://www.hyper.com/).

Successful drugs must have suitable properties in toxicity, bioavailability and pharmacokinetic parameters. Screening for a large number of compounds with excellent absorption, distribution, metabolism, and excretion (ADME) properties is time-consuming and expensive. So the extension of the idea of quantitative structure-activity relationship (QSAR) to pharmacokinetic data has led to emergence of new tool called quantitative structure pharmacokinetic relationship (QSPkR) study. QSPkR study can be utilized in drug design.

Both one- and two-dimensional topological indices have been used extensively to numerically relate molecular structure with activity and/or property. (These descriptors rely only on the molecular graph for their calculation. In contrast, three-dimensional descriptors require the absolute conformation of a molecule. They, too, have been successfully used to develop QSPkRs.

In this study the authors have developed and demonstrated novel computational approaches for the efficient and accurate prediction of AUC and t1/2 of fluoroquinolones. They constructed simple models which can directly correlate physical and chemical properties to pharmacokinetic data. These models can be used not only to predict pharmacokinetic parameters but also to guide the design of novel fluoroquinolones.

In the present study, the authors have tried to develop computational approaches for the prediction of the pharmacokinetics of fluoroquinolones. Quantitative structure-pharmacokinetics relationship analysis can be an important tool at the early stage of drug design. The authors demonstrated that small volume and large polarizability of substitutents of R-1 are beneficial to large t1/2 and small volume, large polarizability and surface area of substitutents at C-7 are of benefit to large AUC in fluoroquinolones.