AIM: To determine whether prior appendectomy modifies the phenotype and severity of Crohn’s disease.

METHODS: Appendectomy status and smoking habits were specified by direct interview in 2838 patients consecutively seen between 1995 and 2004. Occurrence of complications and therapeutic needs were reviewed retrospectively. Additionally, annual disease activity was assessed prospectively between 1995 and 2004 in patients who had not had ileocecal resection and of a matched control group.

The aim of the present study was to analyse the phenotype and clinical course of Crohn’s disease in a large cohort of patients subjected to appendectomy compared with non-appendectomized patients.

From January 1995 to December 2004, all consecutive patients with Crohn’s disease who came to our unit were included in the study. The diagnostic criteria for Crohn’s disease were those of Lennard-Jones[13]

The characteristics of Crohn’s disease were completed according to the retrospective analysis of medical charts. The time of diagnosis was defined as the date of first detection of unequivocal inflammatory abnormalities of the intestine, as assessed from radiological, or endoscopic, or peroperative observations. The initial location of Crohn’s disease lesions was determined by colonoscopy and small bowel X-ray. After diagnosis, patients were followed clinically with 3 to 4 visits per year, and only investigated again in case of flare-up or development of new symptoms. Morphological investigations included proctosigmoidoscopy, colonoscopy, and small bowel X-ray. Upper gastrointestinal endoscopy was only performed in case of gastroesophageal symptoms. Subjects were explored for ano-perineal disease at each visit.

Location and behavior of Crohn’s disease were classified according to the Vienna classification[15]. First morphological demonstration of narrowing or penetrating complication was used to date the occurrence of the complication defining behavior[16].

Our treatment policy has been exposed elsewhere[16]. Flare-up episodes were treated with mesalamine (3-4 g daily) or prednisolone (1 mg/kg per day, progressively tapered after four weeks), according to the clinical severity. When steroid therapy failed, patients seen before 1999 were given a 3-wk course of enteral or parenteral nutrition; those seen after June 1999, when Infliximab became available in France, received Infliximab 5 mg/kg.

As maintenance treatment, we used aminosalicylates (sulphasalazine, olsalazine or mesalamine, 2-3 g daily) for asymptomatic or moderately active forms of the disease, and immunosuppressive drugs for severe forms (steroid-dependent or poorly responsive to steroids). Azathioprine 2 mg/kg per day was used as first line immunosuppressive drug. In case of repeated flare-ups or chronic active disease in a patient receiving azathioprine, its dosage was increased to 2.5-3 mg/kg per day. Intramuscular methotrexate (20-25 mg weekly) was used in patients unresponsive or intolerant to azathioprine. Its dosage was tapered progressively to 10-15 mg, and re-augmented in case of clinical relapse.

Although the overall strategy remained mostly unchanged, there was a clear tendency over time to initiate immunosuppressants earlier in the disease course. Surgery was reserved for stenotic and extra-parietal complications, or intractable forms after a well-conducted medical management.

Phenotype and severity of Crohn’s disease

Phenotyping Crohn’s disease took into account disease location and the occurrence of a stricturing or penetrating complication. Overall severity of the disease was assessed in two ways: first retrospectively, taking into account the importance of the medical therapy, i.e. need for glucocorticoid, nutritional support, immunosuppressive drugs, and Infliximab, and finally incidence of excisional surgery. Second, patients who had not had ileo-cecal resection prior to inclusion were followed-up prospectively from the date of inclusion to December 2004, and activity of the disease was assessed prospectively by analyzing the occurrence of a flare-up each year. A patient-year was considered as active if a flare-up or a complication occurred during the year, and inactive otherwise.

Continuous data are expressed as mean (standard deviation), and differences between the groups were tested for significance by Student's t test. Discrete data are given as percentages, and comparisons were made with Pearson's Chi-square test.

The retrospective study analyzed the effect of prior appendectomy on the long-term course of Crohn’s disease. For this purpose, non-appendectomized patients were included in the control group until the time an ileo-cecal resection was eventually performed. To avoid biases related to the effect of ileo-cecal resection on the subsequent evolution of Crohn’s disease, appendectomized patients were also censored at the time of ileo-cecal resection. For actuarial analysis, the Kaplan-Meier model was used, with the date of diagnosis as starting point. The curves were compared by the Log-rank test. Multivariate analyses were performed with Cox proportional hazards regression to adjust for confounding. All baseline variables suspected to be possible predictors of complication or intestinal surgery [young age (< 20 years), old age (equal to or above 40 years), gender, ethnicity (Caucasian or not), socioeconomic status (high or low-moderate), diagnosis after 1987, familial history, extra-intestinal manifestations, smoking status, initial disease location (esophago-gastro-duodenal, jejunal, ileal, colonic, and anoperineal lesions)], were entered into the model. Diagnosis after 1987 was retained as a variable because the use of immunosuppressive therapy became frequent since that year. Results of analysis are presented as hazard ratios (HRs) with 95% confidence intervals. 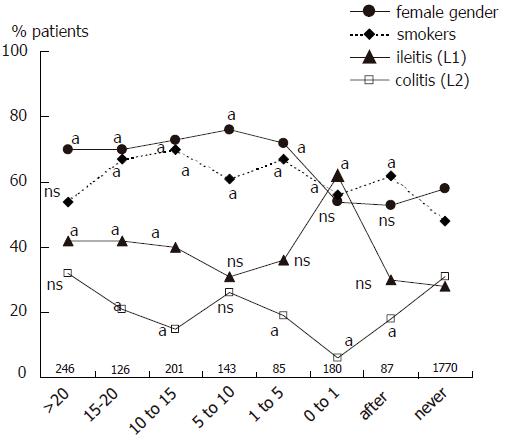 Figure 1 Characteristics of patients and Crohn’s disease (given as percentages) according to appendectomy status and the time span between appendectomy and diagnosis of Crohn’s disease. Numbers indicate the number of patients in each group. a and ns represent the P value of the comparison between the subgroup and the group of never appendectomized patients (aP < 0.05; ns: not significant). 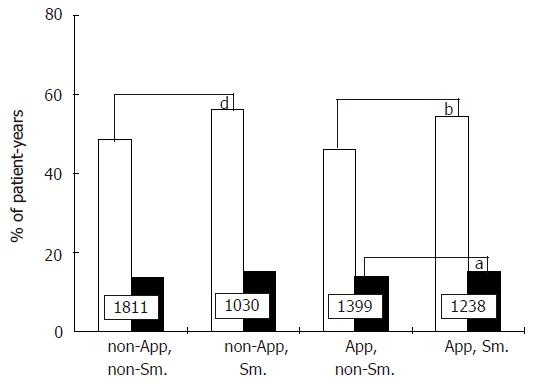 The present results show that previous appendectomy, while associated with some particularities in the location and behaviour of Crohn’s disease, has no effect upon the course of the disease. Appendectomized patients are more prone to ileal disease and to formation of strictures, and less to distal colonic involvement and penetrating perianal disease. However, previous appendectomy does not change disease severity retrospectively assessed from therapeutic needs or prospectively assessed from year-by-year activity.

Crohn’s disease patients with prior appendectomy differed from non-appendectomized Crohn’s disease patients in many aspects. There were more often females, smokers, of low-to-moderate socioeconomic status, and of Caucasian origin. In fact, these particularities might be more a consequence of appendectomy as such, than related to a particular Crohn’s disease phenotype. Indeed, an epidemiological national survey in 1978-82 in France showed that appendectomy, but not appendicitis, was more frequent in females than in males[24], and an association has been shown between appendectomy and passive or active smoking[27]. Other epidemiological studies from UK have also reported an increased rate of incidental appendectomies in women [28]. Similarily, the contrast between a higher proportion of Caucasian patients and a lower proportion of patients of high socio-economic status fits better with what is known about epidemiology of appendicitis than with IBD[29,30]. In the Western world, appendectomy is performed more often in whites than in blacks[31], whereas data from UK suggest that the incidence of IBD in immigrants is similar to that of Europeans[32]. Changes in hygiene and water supply increased the risk of appendectomy[33] which in the last four decades has preferentially concerned populations of low-to-moderate socio-economic status, whereas patients with IBD seem to be better educated[34]. We believe that the overrepresentation of ileal disease in appendectomized Crohn’s disease patients may be at least in part a consequence of the high prevalence of smokers in this group, smoking being associated with ileal Crohn’s disease and not colonic Crohn’s disease[35]. Alternative explanations of the more frequent ileal involvement in appendectomized patients would be a larger use of explorative procedures such as barium follow-through or colonoscopy because patients with previous appendectomy are more prone to small bowel obstruction[36,37] and non specific abdominal pain[38]. The occurrence of abdominal pain may give the opportunity to find out a paucisymptomatic ileitis which could have been ignored otherwise.

Comparisons of disease behaviour between appendectomized patients and controls revealed some subtle differences within each disease location group. The former patients were more exposed to stricture formation and less to penetrating anal disease. Actually, within the colon only group (L2 group), disease location tended to be more distal in non-appendectomized patients, perianal lesions were more frequent, and it could be expected that perianal perforating complications occurred more frequently. The increased prevalence of intestinal strictures in patients with prior appendectomy, although weak, seems more relevant. It may be hypothesized that the presence of intra-abdominal adherences and/or vasculature modifications secondary to prior laparotomy has a role in stricture formation.