AIM: To detect the germline mutations of hMLH1 and hMSH2 based on mRNA sequencing to identify hereditary non-polyposis colorectal cancer (HNPCC) families.

CONCLUSION: Germline mutations of hMLH1 and hMSH2 can be found based on cDNA sequencing so as to identify HNPCC family, which is highly sensitive and has the advantages of cost and time saving.

hMLH1 and hMSH2 are the two most important genes for HNPCC, which is the most common hereditary colon syndrome accounting for 10% of all colorectal cancers. It is autosomally dominant with a penetrance rate of 80-90%. HNPCC occurrence is closely associated with deficiency or loss of function of mismatch repair (MMR) genes. Affected individuals have an approximately 70% lifetime risk of colon cancer with a mean onset age of 44 years and an approximately 40% lifetime risk of endometrial cancer in females. At least 5 MMR genes, hMLH1, hMSH2, hMSH6, hPMS1, and hPMS2, have been implicated in HNPCC[1,2]. Information of genetic linkage analysis shows that germline mutations of hMLH1 and hMSH2 account for nearly 90% of all germline mutations found in HNPCC[3]. Germline mutations in MMR genes predispose to colorectal and other HNPCC associated epithelial cancers. Identification of MMR gene germline mutations has direct clinical implications in counseling and management of HNPCC.

Methods such as microsatellite instability (MSI), immunohistochemistry (IHC)[4-6], and sequencing of genes are employed to screen HNPCC. The most specific method is to detect the germline mutations of MMR. Its cost and sensitivity limitations can be overcome at least in part by RNA-based analysis[7]. It is the first time in China that we identified HNPCC families by detecting germline mutations of hMLH1 and hMSH2 genes based on cDNA sequencing with special primers and heat-resistant reverse transcriptase.

Fourteen anticipants from 12 unrelated families fulfilling Amsterdam criteria II for HNPCC were studied. Personal and family cancer history was obtained from the patients and their relatives. Pathological diagnosis and death were confirmed by review of medical records, pathological reports or death certificates.

Three microliters of peripheral blood was taken from each participant. Total RNA was extracted using TRIzol (Sigma Company) according to the manufacturer’s instructions.

cDNA was synthesized with transcriptor reverse tran-scriptase (Roche Diagnostics) using 0.5 μg of total RNA and specific primers complementary to the 3’ end of hMLH1 (2484-TATGTTAAGACACATCTATTTATTTA-2459) and to the 3’ end of hMSH2 (3145-CCACCAAACTACATGATTTTATTTATAAAATTC-3114). RT was performed at 60 °C for 60 min.

Purified PCR fragments were sequenced directly using a DNA sequencing kit according to Applied Biosystems from USA with BigDye Terminators on an ABI3700 automated DNA sequencer. 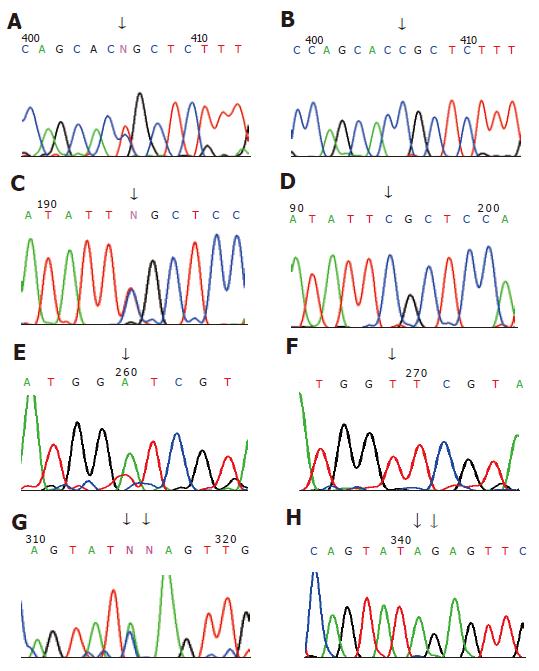 Colorectal cancer (CRC) is one of the most common malignant tumors and its incidence is increasing gradually. According to the different molecular mechanism, CRC is divided into sporadic and genetic types. The latter type HNPCC is characterized by its early onset[8-10], location in the proximal colon and an increased risk of neoplasms in extracolonic organs including endometrium, stomach, urothelium, small intestine, ovary and multiple metachronous CRCs[9,11-14]. Its prognosis is better than sporadic type of CRC[15]. HNPCC is closely associated with the deficiency or loss of MMR gene function. Iden-tification of MMR gene germline mutations has direct clinical implications in counseling and management of HNPCC.

Methods are available for the identification of HNPCC. The most specific method is to detect the ger-mline mutations of MMR genes. Up to now, the germline mutations are mainly detected by genomic DNA-based sequencing (gDNA). A lot of information shows that the germline mutations of MMR genes associated with HNPCC are mainly localized in exons[3,5,7,13]. The gDNA-based sequencing is invariably affected by introns. cDNA-based sequencing of MMR genes has been reported recently. The new technique utilizes specific primers and heat-resistant reverse trancriptase to specifically synthesize cDNA of MMR genes, then full-length cDNA is amplified in two over fragments using specific primers followed by sequencing analysis of cDNA. The technique can successfully avoid the influence of introns. Additionally, it is well known that RNA is easily decayed. If RNA samples are stored too long, reverse transcription with random primers and common reverse transcription enzyme often fails, while the new technique employs specific primers and heat-resistant reverse trancriptase, the limitations can be overcome at least in part, thus improving the specificity and efficiency. Anna et al[7] compared the two techniques and found that cDNA-based sequencing not only has the advantage of specificity and efficiency, but also a lower cost, being 2.5-3 times less expensive than gDNA-based sequencing. We used 35 pair primers to amplify the two genes in the past, and only 4 pair primers were used in the present study, the procedure is greatly simplified.

We detected 7 germline mutations in 14 anticipants with HNPCC from 12 different families employing the new technique. The 3 mutations, at sites 1151, 14, and 217 in hMLH1 reported, the first two have been verified to be pathological. Moreover, the mutation at 1151 in hMLH1 has been found only in Japan and Korea, which is likely to be a hot mutation site in East Asia. The mutation at site 217 in hMLH1 occurs at a less conserved region is in 80 healthy Japanese. Whether it is pathological or not needs further study. None of the 4 unreported mutations belongs to polymorphism[17]. The 6 pathological mutations (2 reported, 4 unreported) were distributed in 5 HNPCC families in our study.