AIM: To study the distribution pattern of transcription factors NF-κB and AP-1 and their relations with the expression of apoptosis associated-proteins Fas/FasL and ICH-1L/S in human hepatocellular carcinoma (HCC).

METHODS: We performed in situ hybridization and immunohistochemical techniques for NF-κB, AP-1, Fas/FasL and ICH-1 in 40 cases of human HCC along with corresponding nontumoral tissues and 7 cases of normal liver tissues.

RESULTS: Twenty-two (55%) and 25 (62.5%) of 40 cases for NF-κB and AP-1 were presented for nuclear or both nuclear and cytoplastic staining respectively, while less cases were presented for only cytoplastic staining for NF-κB (18%) and AP-1 (10%) in adjacent nontumoral tissues and negative staining in normal liver tissues. There was no statistically significant difference of NF-κB or AP-1 activation between well differentiated tumors and poorly differentiated tumors (P > 0.05). NF-κB activity is positively corresponded to AP-1 activation. The expression of ICH-1L/S was associated with the activation of NF-κB and AP-1 (P < 0.05), but no significant relationship was found between Fas/FasL and NF-κB or AP-1(P > 0.05).

Hepatocellular carcinoma (HCC) is one of the most common cancers and cause of mortality in China. Much advanced progresses in the mechanism of hepatocarcinogenesis have been achieved for these years. Many genes such as proto-oncogenes, tumor suppressor genes, apoptosis genes and growth factors genes have been implicated and apoptosis genes may play an important effect in the process of hepatocarcinogenesis[1-6]. Apoptosis-related genes such as bcl-2/bax, Fas/FasL and caspase are involved in the pathogenesis of HCC[3-6]. However, more steps of apoptosis genes in this process remain unknown yet.

Activated protein-1 (AP-1) and nuclear factor κB (NF-κB), two of important transcription factors, play important roles in signal transduction pathways of cell differentiation, proliferation and apoptosis in response to a variety of physiological and pathological stimuli[7-13]. AP-1 consists of homodimers and heterodimers of the Jun family (c-Jun, JunB, JunD), and the Fos family (c-Fos, FosB, Fra1, Fra2). NF-κB is a heterodimeric complex composed of two subunits of the Rel/NF-κB family, factors including NF-κB1 (p50), NF-κB2 (p52), c-Rel, RelA/p65, and RelB[14]. Some investigators have presented aberrant DNA binding activity of AP-1 and NF-κB in various types of human tumor such as HCC, gastric carcinoma, breast carcinoma and so on[15-22]. These findings suggested that AP-1 and NF-κB may be important in the control of cell proliferation and oncogenesis of these tumors.

The molecular mechanisms of NF-κB and AP-1 in the regulation of Fas/FasL mediated apoptosis may be different in T cells, Jurkat cells, hepatocyte-derived cell lines and colon carcinoma cell[23-27]. However, whether NF-κB and AP-1 play important roles in regulation of Fas/FasL and ICH-1L/S expression in human HCC is still not known. In the present study, we undertook to investigate whether AP-1 and NF-κB are constitutively activated in human HCC tissues and to evaluate the relationship between AP-1 or NF-κB activity and the expression of apoptosis associated proteins (Fas/FasL and ICH-1L/S) by in situ hybridization and immunohistochemical techniques.

Forty samples were obtained by surgical resection in our department. All samples were independently reviewed by two pathologists. The cases of HCC were classified according to the criteria described by Edmondson-Steiner and grouped as well differentiated (grade I-II; n = 25) or poorly differentiated (grade III-IV; n = 15). Seven undamaged liver tissues from surgical resection specimens of young adults with minor liver injury who underwent partial hepatectomy were used as normal control. All tissues were fixed in 40 g/L formaldehyde (pH 7.0) for 12-24 h and embedded in paraffin wax and then 4 µm serial sections were cut and mounted on poly-l-lysine coated slides.

Sections were deparaffinized and rehydrated routinely. Antigen was retrieved by heating sections in a microwave oven at 700 W in 10 mmol/L citrate buffer (pH 6.0) for 10 min. After blocking with 0.3% H2O2 and swine serum, specimens were then incubated with the primary antibodies, directed against Fas, FasL, and ICH-1L/S (Santa Cruz product, dilution 1:100) at 4°C overnight. Secondary antibodies were applied according to the manufacturer’s recommendations (Amersham). The staining was performed by streptavidin-peroxidase enzyme conjugate method using a S-P kit (Zymed product). Reaction products were visualized by DAB (diaminobenzidine). The slides were counterstained with hematoxylin before mounting in paramount. Brown-yellow granules in cytoplasm were recognized as positive staining.

Sections were deparaffinized and rehydrated routinely. Oligonucleotides containing the consensus sequence of AP-1 (5’-CGCTTGATGAGTCAGCCGGAA-3’) and NF-κB (5’-AGTTGAGGGGACTTTCCCAGGC-3’) were respectively used as probes and 3’-labeled with biotin. Preparations were incubated with the labeled probes (37°C, overnight). Non-specific antigen was blocked with 2% bovine serum and 0.3% Triton X-100, followed by incubation with anti-biotin antibody alkaline phosphates mixture for 1 h. Slides were then visualized with BCIP/ NBT. Purple-blue granules were regarded as positive staining. In general, inactivated NF-κB and AP-1 were located in cytoplasm and nuclei staining scored as activated NF-κB and AP-1.

We used the following negative controls: (a) absence of probes, (b) mutant AP-1 or NF-κB probes 5’-CGCTTGAT-AAATCAGCCGGAA-3’, and 5’-AGTTGAGGCTC-CTTTCCCAGGC-3’, respectively, labeled with biotin, (c) competition assays with a 100-fold excess of unlabeled AP-1 or NF-κB probes, followed by incubation with its respective labeled probe.

Statistical significance was calculated by χ2 test. The χ2 test was used to analyze the association between NF-κB/AP-1 and histopathological grades and Fas/FasL and ICH-1L/S. P < 0.05 was regarded as significant difference.

RESULTS
Detection of NF-κB and AP-1 in HCC 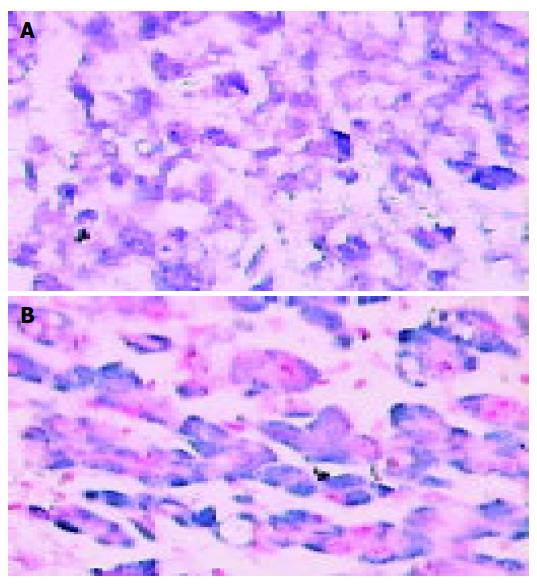 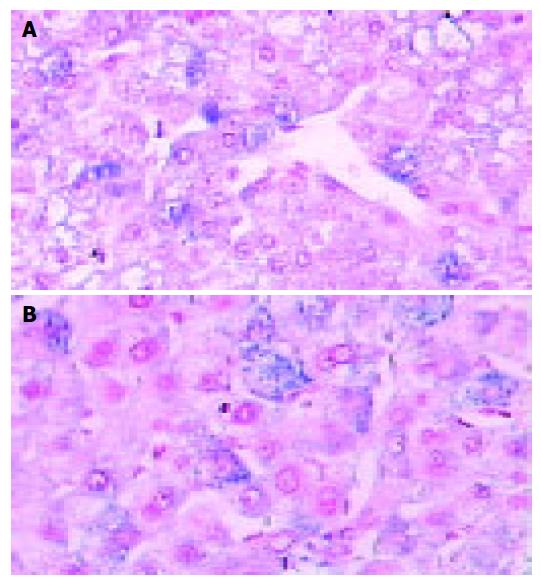 Figure 2 Nontumor liver tissue showing focal and weak cytoplasmic for NF-κB (A) and AP-1 (B). In situ hybridization (magnification ×200).
Expression of apoptosis proteins in HCC 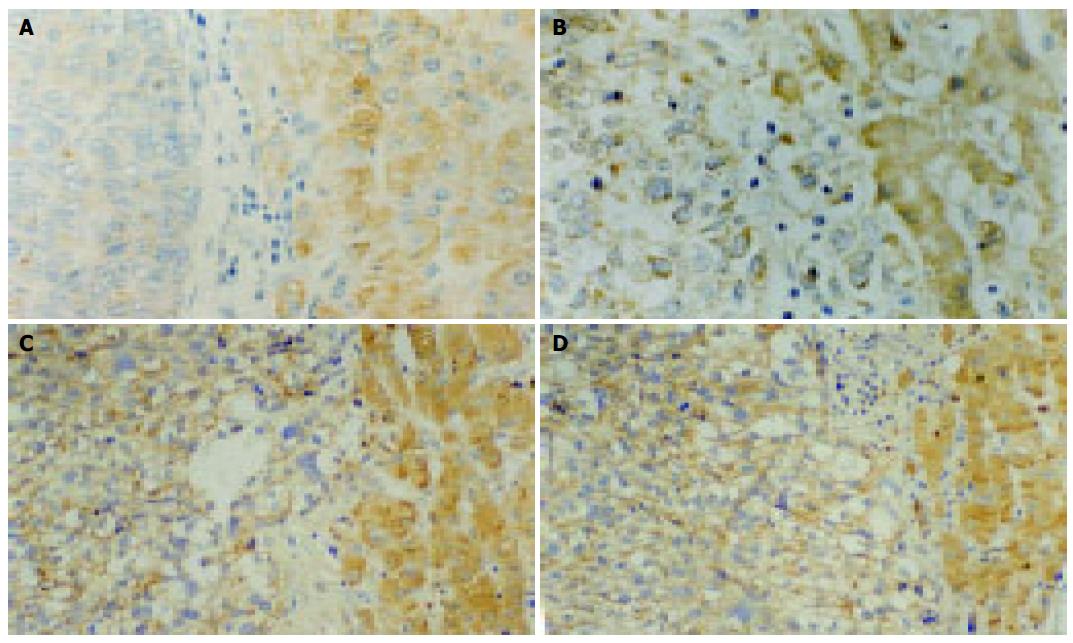 Relationship between activated AP-1 and apoptosis proteins in HCC

Electrophoretic mobility shift assays is a common and useful technique for studying transcription factors. However, the distribution of transcription factors either in nucleus or cytoplasm cannot be shown using this technique. In situ detection using nonradioactive oligonucleotides in paraffin wax-embedded tissues was successfully used for studying NF-κB and AP-1 activation in kidney and injured vessels[28]. In this study, we performed this technique to detect NF-κB and AP-1 in HCC and obtained ideal results. The distribution of NF-κB and AP-1 was presented in nuclear and cytoplasmic types. Positive signals in HCC were mainly located both in nuclei and cytoplasm while cytoplasmic staining mainly in nontumor. We concluded that in situ hybridization is a convenient and efficient tool for studying transcription factors (Table 5).

Some studies have shown that DNA binding activity of NF-κB and AP-1 was aberrant in HCC[15,16]. Liu et al[15] measured the DNA binding activity of AP-1 and NF-κB in the peritumoral and the tumoral parts of 15 primary liver cancers. AP-1 and NF-κB binding activities were in 73% and 87% of the cases in the peritumoral tissue respectively. A further activation of AP-1 and NF-κB binding in the tumoral parts was detected in 40% and 80% of the cases respectively. Early activation of AP-1 and NF-κB contributes probably to the acquisition of a transformed phenotype during hepatocarcinogenesis, whatever the etiology. Tai et al[16] studied the NF-κB-DNA binding activity and its dimmer, active nuclear RelA and nuclear IkappaB-alpha proteins expression in HCC using electrophoretic mobility shift assay and Western blot analysis. The results showed that nuclear NF-κB DNA binding activity and nuclear RelA protein expression were greater in tumor tissue compared with nontumor tissue. Constitutive activation of NF-κB was found more frequently in tumor tissue compared with nontumor tissue. In our study, the results are similar to that by electrophoretic mobility shift assay. Furthermore, our findings presented positive staining for NF-κB and AP-1 distribution in cytoplasm (inactive from) at 68% and 58% in adjacent liver tissues, 1/7 and 2/7 in normal liver, and in nuclei (active form) at 55% and 62.5% in tumor tissues. The possible activation of NF-κB has been shown in some carcinoma tissues such as human pancreatic carcinoma, gastric carcinoma and breast carcinoma. NF-κB activation was evaluated on the basis of nuclear translocation from inactive form with NF-κB-IκBs complex in cytoplasm[18,20-22]. However, the mechanism concerning AP-1 activation in carcinoma is not available. We further found that NF-κB activity positively corresponded to AP-1 activation. Taken together, these results demonstrated that NF-κB and AP-1 translocated from cytoplasm (inactive form) to nucleus (active form) during hepatocarcinogenesis and suggested that activation of both NF-κB and AP-1 may be required to produce potential biological function and play important roles in the oncogenesis of human HCC.

Fas/FasL system is involved in apoptosis in human HCC[5,6]. In this study, we further investigated whether there is a relationship between NF-κB or AP-1 activity and Fas/ FasL expression in HCC. The results showed that more expression of Fas and FasL was found in cases with activated NF-κB or AP-1 than those with inactivated NF-κB or AP-1 in HCC but the differences were not significant statistically (P > 0.05). These data indicated that NF-κB and AP-1 activation may not be required for Fas/FasL-induced apoptosis in HCC. Similar results have been reported in other different cells. Nagaki et al[23] found NF-κB blocks hepatocyte apoptosis mediated by the TNF receptor, but not by Fas. In T cells, NF-κB signaling pathway is not required for activation-induced FasL expression[24]. Lack of a requirement for AP-1 induction in Fas-mediated death was substantiated with Jurkat cell[25]. However, the results contrary to those stated above have been implicated in some studies. Marusawae et al[26] demonstrated that NF-κB activity is related to Fas signaling in hepatocyte-derived cell lines, HepG2 and Huh-7 cells. Overexpression of kinase-inactive NF-κB-inducing kinase (NIK) and IkappaB kinase (IKK) inhibited the activation of NF-κB introduced by anti-Fas treatment in these cells. Inactivation of NF-κB by the production of IkappaB-alpha protein made these cells more susceptible to apoptosis induced by Fas stimulation. NF-κB and AP-1 are also found involving in the transcriptional regulation of FasL in Fas-mediated thymineless death of colon carcinoma cell[27]. These results suggested NF-κB and AP-1 may play different roles in the regulation of Fas/ FasL-mediated apoptosis in different cells.

ICH-1, a gene related to the C. elegans cell death gene ced-3 and the mammalian homolog of ced-3, interleukin-1 beta-converting enzyme (ICE). Alternative splicing results in two distinct ICH-1 mRNA species. One mRNA species encodes a protein product of 435 amino acids (ICH-1L) that is homologous to both the P20 and P10 subunits of ICE (27% identity) and the entire CED-3 protein (28% identity). The other mRNA encodes a 312 amino acid truncated version of ICH-1L protein (ICH-1S). Overexpression of ICH-1L induces programmed cell death, while ICH-1S suppresses Rat-1 cell death induced by serum deprivation. ICH-1 plays an important role in both positive and negative regulation of programmed cell death in vertebrate animals[29]. In this study, we found that aberrant expression of ICH-1 in HCC and adjacent tissues compared to normal liver. The results also showed that there are statistical differences between expression of ICH-1L or ICH-1S and NF-κB or AP-1 activation. These findings suggested that NF-κB and AP-1 may play a role in mediating ICH-1L/S expression during pathogenesis of HCC.