METHODS: A total of 123 gastroscopic samples, including 11 cases of cancerous tissues, 63 cases of chronic atrophic gastritis tissues, 47 cases of chronic superficial gastritis tissues and 2 cases of normal tissues, were obtained from the First Hospital of Xi’an Jiaotong University, China. A modified attenuated total reflectance (ATR) accessory was linked to a WQD-500 FT-IR spectrometer for spectral measurement followed by submission of the samples for pathologic analysis. The spectral characteristics for different types of gastroscopic tissues were summarized and correlated with the corresponding pathologic results.

Fourier-transform infrared (FT-IR) spectroscopy can effectively provide chemical variation information of the structure and composition of biologic materials at molecular level[1]. Therefore, vibrational spectroscopy is becoming an increasingly powerful tool for the research on biochemistry of cancer[2-5]. Our research group has successfully used FT-IR spectroscopy to diagnose carcinomas, such as carcinoma of stomach, colon, esophagus, lung, salivary gland since 1995[6-9]. There are significant differences between the spectra of malignant and corresponding normal tissues[10-12]. In addition, FT-IR spectroscopy could detect molecular abnormalities which occur before the change in morphology seen under light microscope[13]. Therefore, FT-IR technology makes it possible to detect inflammatory and precancerous changes. Rapid, accurate and convenient detection of gast-roscopic tissues can be performed using FT-IR spectroscopy if mid-infrared fiber optics technology and stomach endoscopy technology are combined, however the flexible mid-infrared optical fiber and mini probe are not yet available[14].

Informed consent was obtained from each patient prior to the study. A total of 123 fresh surgically resected gastric tissue specimens were obtained from the First Hospital of Xi’an Jiaotong University, China. There were 47 women and 76 men, aged between 18 and 80 years (mean 50.3 years). One endoscopic pinch biopsy, 1-3 mm in diameter, was obtained from each patient. The detected samples consisted of 11 cases of cancerous tissues, 63 cases of chronic atrophic gastritis tissues, 47 cases of chronic superficial gastritis tissues and 2 cases of normal tissues.

The fresh tissue specimens were obtained in gastroscopy detection, and then immediately and non-invasively measured using the mobile FT-IR spectrometer near the operation room. The sample was put on ATR accessory to measure the spectrum. The background spectrum was collected. For the collection of each spectrum, 32 scans at a resolution of 4/cm, with a normal range from 4 000/cm to 800/cm were applied. It took about 1-2 min to non-invasively measure the spectrum. After measurement, the samples were stored in liquid nitrogen and sent for the pathologic examination of H&E staining as the reference in the spectral analysis. 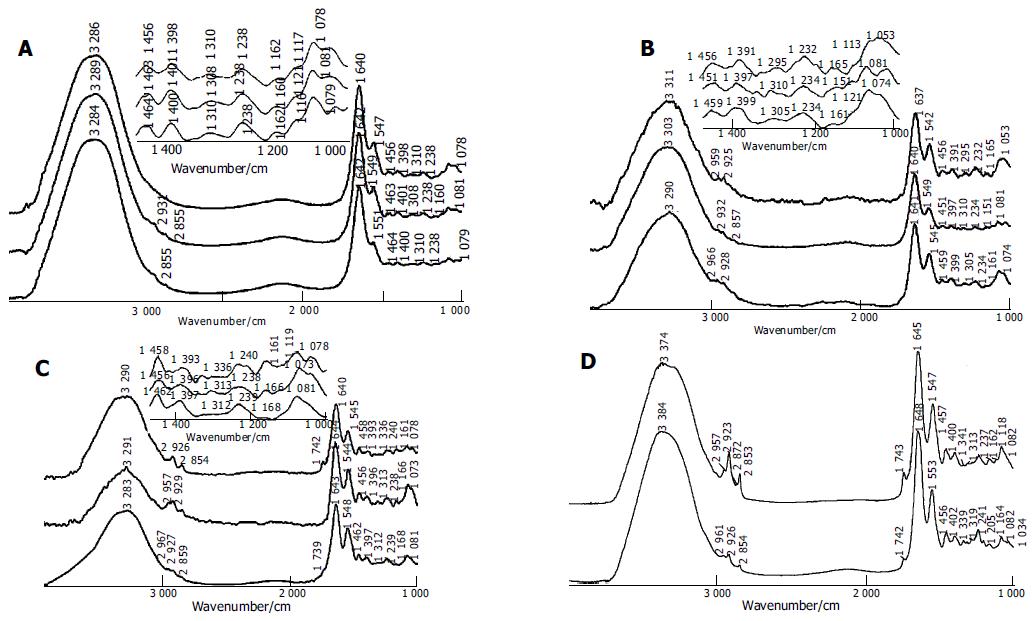 Figure 2B shows the spectral differences between normal gastric tissue and chronic superficial gastritis tissue. The positive peaks in the region of 2 800-3 000/cm and near 1740/cm were observed in the subtraction spectrum, suggesting that normal gastric tissue contains more components of long-chain C-H and C = O bonds. However, these peaks often decrease and even disappear in the spectra of gastritis and malignant tissues. Because triglyceride contains a large proportion of methyl, methylene and carbonyl, and fat in the region of malignant tissue is consumed because of the necessary nutritional and energy requirement in the development of carcinoma. At the same time, amide I and amide II bands are stronger in the spectrum of normal gastric tissue than in that of chronic superficial gastritis tissue, indicating that normal gastric tissue has more regular protein secondary structures, such as α helical structure.

In conclusion, the results in our study demonstrate that the sensitivity of FT-IR detection to gastric cancer, chronic atrophic gastritis and superficial gastritis is 90.9%, 82.5%, 91.5%, and specificity is 97.3%, 91.7%, 89.5% respectively. FT-IR spectroscopy is effective in distinguishing gastric inflammation from malignancy.