AIM: To investigate the mechanism and regulation of differentiation from bone marrow mesenchymal stem cells (MSCs) into hepatocytes and to find a new source of cell types for therapies of hepatic diseases.

METHODS: MSCs were isolated by combining gradient density centrifugation with plastic adherence. The cells were cultured in osteogenic or adipogenic differentiation medium and determined by histochemical staining. MSCs were plated in plastic culture flasks that were not coated with components of extracellular matrix (ECM). When MSCs reached 70% confluence, they were cultured in low glucose Dulbecco’s modified Eagle’s medium supplemented with 10 mL/L fetal bovine serum, 20 ng/mL hepatocyte growth factor (HGF) and 10 ng/mL fibroblast growth factor-4 (FGF-4). The medium was changed every 3 d and stored for albumin, alpha-fetoprotein (AFP) and urea assay. Glycogen store of hepatocytes was determined by periodic acid-Schiff staining.

CONCLUSION: The method combining gradient density centrifugation with plastic adherence can isolate MSCs. Rat MSCs may be differentiated into hepatocytes by FGF-4 and HGF. Cytokines may play a more important role in differentiation from rat MSCs into hepatocytes.

Liver transplant may be the only way to treat patients with a heavily damaged liver. However, enough livers are not available. Moreover, rejection is another problem to be solved. The characteristics and potentials of mesenchymal stem cells (MSCs) suggest that MSCs may be a better way to solve the problems. Bone marrow is a complex tissue containing two kinds of stems cells: hematopoietic stem cells (HSCs) and MSCs. MSCs are nonhematopoietic cells and serve as hematopoietic tissues. It was reported that MSCs could differentiate into mesoderm cells lineage such as osteoblasts[1-3], adipocytes[4-6], neuron and brain cells[7-10], and cardiomyocytes[11-13] in vivo and in vitro. Recent work has convincingly demonstrated that adult bone marrow contains cells capable of differentiating into liver epithelial cells in vivo[14-17]. As far as differentiation from MSCs into hepatocytes in vitro is concerned, Schwartz et al[18], have reported that multipotent adult progenitor cells cultured on matrigel or fibronectin could differentiate into functional hepatocyte-like cells. Fiegel et al[19], cultured HSC on collagen matrix and differentiated them into hepatocytic cells in vitro. Matrigel, fibronectin, and collagen matrix are components of extracellular matrix (ECM).

Although there are many methods to isolate MSCs from the bone marrow, no optimal method is available. In our experiment, we used a relatively simple method, combining gradient density centrifugation with adherence, to isolate rat MSCs and cultured them in plastic culture flasks not treated by ECM. By induction of acid fibroblast growth factor-4 (FGF-4) and hepatocyte growth factor (HGF), rat MSCs could differentiate into hepatocytes in vitro.

SD rats were killed by knocking at their heads, then put into 750 mL/L alcohol for 15 min. We took the femur, tibia ulna, a total of four bones from one rat. Muscles on the bones were taken out as clean as possible. Medullary cavities of bones were washed with DMEM-LG. The DMEM-LG containing cells were layered over an equal volume of Percoll solution (1.073 g/mL). Mononuclear cells (MNCs) were recovered from the gradient interface and washed with PBS after centrifugation at 900 r/min for 30 min. The MNCs were suspended in 5 mL DMEM-LG supplemented with 100 mL/L FBS, 100 U/mL penicillin, 100 U/mL streptomycin, at last plated in 25-cm2 plastic cell culture flasks at the density of 106/mL. The cells were maintained at 37 °C in 50 mL/L CO2 in fully humidified air. In the following 3 d, the medium was changed every day and then every 3 or 4 d.

The cultured cells at passage 2 were seeded in the plastic culture flasks at 5×105/bottle. When the cells grew at 70% confluence, the control group was continuously cultured in DMEM-LG supplemented with 10 mL/L FBS, 100 U/mL penicillin, 100 U/mL streptomycin. The hepatocyte differen-tiation group was cultured in DMEM-LG supplemented with 10 mL/L FBS, 20 ng/mL HGF, 10 ng/mL FGF-4, 100 U/mL penicillin and 100 U/mL streptomycin. Each flask was added with 5 mL medium, and changed every 3 d. The medium was stored at -20 °C for albumin, alpha-fetoprotein (AFP) and urea assay.

Urea concentrations were determined by colorimetric assay. The control group was used as a negative control, which was cultured in DMEM-LG supplemented with 10 mL/L FBS, 100 U/mL penicillin and 100 U/mL streptomycin. The method could detect the urea at least 10 mmol/L.

In the hepatocyte differentiation group, on days 18, 21, and 24, we took out the medium from the flasks, rinsed cells with PBS thrice, fixed them with 100 mL/L formaldehyde for 30 min. The cells were oxidized in 10 g/L periodic acid for 10 min and rinsed thrice in dH2O. Afterwards, cells were treated with Schiff’s reagent for 10 min, rinsed in dH2O for 10 min, stained with hematoxylin for 2 min, differentiated by 1% alcohol-HCl, and rinsed in dH2O again, observed under an invert microscope.

The data of AFP, albumin and urea were expressed as mean±SE. The results were analyzed by t-test. P<0.05 was considered statistically significant.

The cells isolated by gradient density centrifugation showed heterogeneity during the first 3 d. The adherent cells were observed on d 1-2. The spindle-shaped cells appeared at the bottom of culture flasks. Many round cells were suspended in the medium. By continuous changes of medium, the suspending cells became less and less. When the medium was changed thrice, the suspending cells were completely removed from the medium. The adhered cells were fibroblast-like and grew as a whirlpool. The sub-cultured cells were much pure and fibroblast-like (Figure 1A). The primary culture cells reached confluence 10-12 d later, the cells sub-cultured at a ratio of 1:3 reached confluence 8-10 d later. 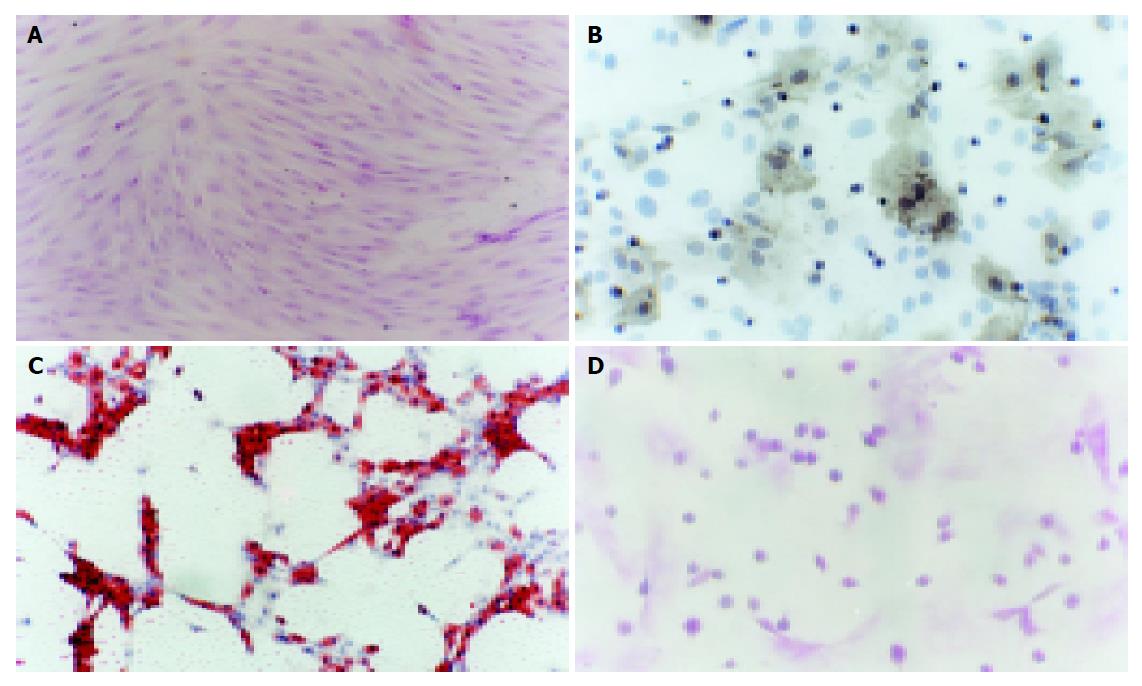 Figure 1 Different morphology and differentiation of rat MSCs. A: Morphology of rat MSCs stained with HE. The cells were fibroblast-like and grew as a whirlpool (×100); B: Appearance of osteocytes 21 d after induction. The positive cells were observed by stain for alkaline phosphatase. The gray parts were cytoplasm stained for alkaline phosphatase. The cells differentiated MSCs into osteocytes. The blue ones were nuclei stained with hematoxylin (×400); C: Oil red-O positive cells 6 d after adipogenic differentiation of rat MSCs. The red parts were lipid-rich vacuoles, the blue ones were nuclei stained with hematoxylin (×100); D: Cells stained by PAS. Glycogen storage was seen as accumulated magenta staining. The small round cells and epithelioid cells had magenta staining in the region (×200).
Induction of multilineage differentiation

The cells at passage 2 were cultured in DMEM-LG supplemented with 10 mL/L FBS. When the cells grew at 70% confluence, they were treated with or without (control) 50 µg/mL of ascorbate-2 phosphate, 10-8 mol/L of dexamethasone, and 10 mmol/L of β-glycerophosphate. Osteogenic differentiation was attained on d 21 following the treatment. Under the influence of these reagents, approximately 37.5% of the cells formed alkaline phosphatase-positive aggregates (Figure 1B) or von Kossa stain-positive nodules, while the controls did not, suggesting that rat MSCs differentiated into osteocytes. Under the influence of 1 µmol/L dexamethasone, 10 µg/mL bovine insulin, and 0.25 mmol/L 1-methyl-3-isobutylxamthine, the isolated mesenchymal cells formed oil red-O-positive cells on the 3rd d after treatment, while the controls did not. If the lipid droplet appeared in cytoplasm of adipocytes, oil red O would specifically stain them. Six days after treatment, approximately 90.33% of the cells induced adipocytes and reached confluence (Figure 1C).

When the cultured cells reached 70% confluence, they were treated with hepatocyte differentiation medium. The medium contained DMEM-LG supplemented with 10 mL/L FBS, 20 ng/mL HGF, and 10 ng/mL FGF-4, 100 U/mL penicillin and 100 U/mL streptomycin. Before the 6-d treatment they did not show any changes compared with the controls. After treatment, the small round cells appeared in the treatment group, epithelioid cells were also observed. The diameter of the cells was 10-16 µm. On d 24, approximately 56.6% of cells were small round and epithelioid. The control cells were still fibroblast-like, the density of cells was increased. The cells were overlapped in some regions.

By radioimmunoassay, albumin and AFP production was measured at various time points throughout the differentiation. On undifferentiated rat MSCs we could detect low levels of AFP, but not albumin. However, there was a small amount of albumin in the medium. It was hardly detected by albumin RIA assay. Compared with controls, the levels of AFP increased significantly from d 12 with a concentration of 15.5±1.4 µg/L (P<0.05) in MSCs cultured with FGF-4, and HGF continued to increase and was higher on d 21 (P<0.01) with a concentration of 46.2±1.5 µg/L, then decreased to 24.8±2.2 µg/L on d 24 (P<0.01). The level of albumin could not be detected by radioimmunoassay before d 12, albumin increased significantly on d 21 with a concentration of 1.4±0.2 µg/mL (P<0.01), and 2.1±0.7 µg/mL on day 24 (P<0.01). According to the data, increasing time points were different between AFP and albumin (Table 1).

Urea production and secretion by hepatocytes were detected at various time points throughout differentiation. Following treatment with FGF-4 and HGF, urea produced by MSCs was detected with a concentration of 2.3±0.4 mmol/L on d 21, and 2.6±0.9 mmol/L on d 24 (Table 1).

We analyzed the levels of glycogen storage by periodic acid-Schiff (PAS) staining of FGF-4 and HGF induced MSCs on d 18, 21, and 24. Glycogen storage was first seen on d 21, positively stained for PAS (Figure 1D).

In our present study, we used the method combining gradient density centrifugation with plastic adherence to isolate MSCs from rat bone marrow. By the primary induction of multilineage differentiation, the isolated cells satisfied the characteristics of MSCs. Moreover, we cultured rat MSCs in culture flasks not treated by ECM and differentiated them into hepatocytes by induction of HGF and FGF-4, suggesting that cytokines played a most important role in differentiation from rat MSCs into hepatocytes.

MSCs have many differentiating potentials in vivo and in vitro. In order to prove what we have isolated from bone marrow was MSCs, we made the isolated cells differentiate into osteoblasts and adioblasts by induction of reagents. The isolated cells had the characteristics of MSCs, suggesting that the method combining gradient density centrifugation with plastic adherence is an ideal way to isolate rat MSCs.

During the 24 d of differentiation, FGF-4 and HGF induced MSCs into cells with morphological and functional characteristics of hepatocytes. In our study, the cells that were differentiated into hepatocyte-like cells could produce urea, secrete albumin and AFP, and store glycogens. Urea production was characterized by hepatocyte activity, although kidney tubular epithelium also produced urea. In contrast, albumin and AFP production is a specific test for the presence and metabolic activity of hepatocytes. Only hepatocytes can generate and store glycogens. In our research, we found that AFP could be detected throughout the differentiation, because the medium contained a low level of AFP. From d 12, the level of AFP increased significantly compared with controls, suggesting that MSCs began to secrete AFP. It was reported that AFP was produced by immature hepatocytes. That is to say, the hepatocytes were immature on d 12 and 15. Before d 12, the concentration of albumin could not be measured by radioimmunoassay because there was a much small amount of albumin in the medium. When MSCs differentiated, albumin was significantly secreted by MSCs from d 21, and urea was also significantly secreted from d 21. By PAS staining, the differentiated cells could store glycogens. The data suggest that rat MSCs can be differentiated into hepatocytes by induction of FGF-4 and HGF.

MSCs could be isolated, expanded, and maintained in vitro in an undifferentiated state for more than 100 population doublings[30], and differentiate into hepatocytes. The finding may make MSCs as ideal cells for in vivo therapy of genetic or acquired disorders of the liver and for use in bioartificial liver devices. Moreover, MSCs might be used as a new potential therapeutic modality for severe acute pancreatitis. We hope that marrow MSCs will play a more important role in therapy of liver diseases in the future.