AIM: To compare the gene expression between La (NO3) 3-exposed and control rats in vivo.

METHODS: Rats were fed La (NO3) 3 once daily at a dose of 20 mg/kg for one month by gavage. Gene expression of hepatocytes was detected using mRNA differential display (DD) technique and cDNA microarray and compared between treated and control groups.

CONCLUSION: La (NO3) 3 could change the expression levels of some kinds of genes. Further analysis of the differentially expressed genes would be helpful for understanding the wide biological effect spectrum of rare earth elements.

Rare earth (RE) includes 17 elements. According to the physical and chemical nature, 16 elements except for scandium (Sc) are categorized into two groups. One is called light RE, which is represented by cerium, including lanthanum (La), cerium (Ce), praseodymium (Pr), neodymium (Nd), promethium (Pm), samarium (Sm) and europium (Eu). The other is called heavy RE, which is represented by yttrium, including gadolinium (Gd), terbium (Tb), dysprosium (Dy), holmium (Ho), erbium (Er), thulium (Tm), ytterbium (Yb), lutetium (Lu) and yttrium (Y). Recently, RE has become one of the common xenobiotics in our surroundings as it is widely used in industry, stockbreeding and medicine, especially as trace fertilizers in agriculture, and they can be concentrated by food chain. Therefore, understanding the effects of RE on health has become more and more important.

Studies on RE toxicology have lasted for a long time. However, deeper exploration of its mechanism is highly needed. It is well known the biological effect spectrum of RE is wide and the dose-response relationship is complicated. For example, RE elements could induce chromosome damage of blood lymphocytes[1] and liver damage[2-4], depress learning and memory[5], increase or suppress cell-mediated immunity of the spleen[6], inhibit gap junctional intercellular communication[7], etc. However, safety evaluation of RE is not easy, and the research of biomarkers by molecular biology is in its infancy. It is necessary to find more sensitive biomarkers by new techniques and methods, and to acquire a deeper understanding of the mechanism.

In this paper, the molecular mechanism of RE toxicity was explored by DD and cDNA microarray. La (NO3) 3, which is the major component in RE trace fertilizers, was selected as the study material.

MATERIALS AND METHODS
La (NO3) 3 treatment of rats

In the study of DD, 86-week-old Wistar rats were chosen. One half of them were male, and the others were female. To guarantee the treated rats and control had similar heredity backgrounds, the rule of same-breeding and same-sex control was applied. A La (NO3) 3-treated rat and its control were called a pair of test animals. There were two pairs of male rats and female rats, respectively. Treated rats were fed La (NO3) 3 once daily at a dose of 20 mg/kg for one month by gavage. Control rats were fed distilled water. One pair of female rats was chosen in the study of cDNA microarray. Parts of isolated rat livers were used to observe morphology of hepatocytes by light microscopy and electron microscopy. Others were snap frozen in liquid nitrogen and then stored at -80 °C until RNA extraction.

A 7 μL PCR mixture was redissolved in 4 μL loading dye, heated at 95 °C for 2 min, then run on 80 g/L polyacrylamide-urea gels at 9 mA. DNA fragments on gels were displayed by silver stain method. Bands representing cDNA, which appeared to be differentially expressed, were excised and reamplified under the same conditions as above except the primers. In this procedure, T7 promoter and M13 reverse (-48) were used.

DNA sequence analysis was carried out with dye-terminator method in ABI DNA sequencer. DNA sequences were identified by comparison to those in GenBank BLASTn on Internet.

cDNA probes were prepared through reverse transcription and then purified. The probes from normal rats were labeled with Cy3-dUTP, and the probes from La (NO3) 3-treated rats were labeled with Cy5-dUTP. The chips were scanned using ScanArray3000 laser scanner (General Scanning, Inc) at two wavelengths to detect emissions from both Cy3 and Cy5. The acquired images were analysed using ImaGene3.0 software (BioDiscovery, Inc.). The intensity of each spot at the two wavelengths represented the quantity of Cy3-dUTP and Cy5-dUTP, respectively. Each ratio of Cy3 and Cy5 was computed. Overall intensities were normalized by a coefficient according to the ratios of the located 40 housekeeping genes. To minimize artifacts arising from low expression values, only the genes with raw intensity values larger than 800 counts for one or both of Cy3 and Cy5 were chosen for differential analysis.

RESULTS
Effects of La (NO3) 3 on morphology of rat hepatocytes

La (NO3) 3 had no significant effects on histopathology by light microscopy. Swollen or cavitated mitochondria were observed in hepatocytes by electron microscopy (Figure 1). 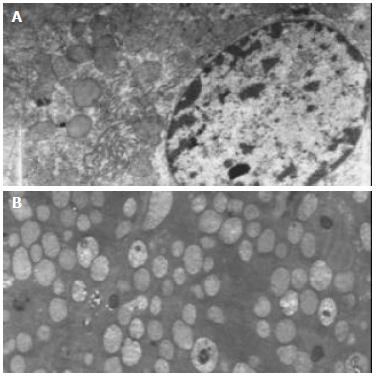 Figure 2 Polyacrylamide-urea gel of DNA fragments. Six dif-ferentially expressed bands in two pairs of rats were obtained. “T” above the bands and in name represents treated group, while “C” represents control group, “M” represents male, and “F” represents female. Among the bands, the expression levels of LaFT1-1-2, LaFT1-3-1, LaFT1-3-2, LaFT1-4-1 and LaMT1-4-1 were increased in treated rats. However, the level of LaFC1-4-1 was decreased. 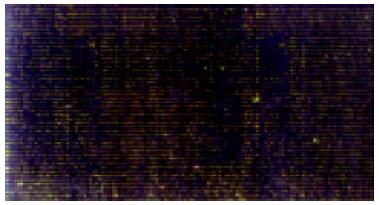 We screened out 136 differentially expressed genes according to the following rules. The ratio of Cy3 and Cy5 signal was larger than 2 or smaller than 0.5, the raw intensity value of one or both of Cy3 and Cy5 was larger than 800, the trend of up-regulation or down-regulation in parallels was the same. Of the 136 genes with altered expression, 131 genes had an elevated expression and 5 genes had a reduced expression. Most of the differentially expressed genes were cell signal and transmission genes, genes related to metabolism, protein translation and synthesis genes. Five down-regulated and 19 up-regulated genes with their differential expression levels more than 4-fold and having similar trends, are described in Table 1.

Studies on toxicities of RE elements by different intake pathways showed that the liver was the target organ of RE element toxicity[9-15], and 20 mg/kg was believed to be the effective dose in oral administration[15]. So, rats treated with La (NO3) 3 at a dose of 20 mg/kg by gavage were chosen in our study.

mRNA differential display could provide a unique and powerful experimental system to study differential gene expression. In this study, six differentially expressed tags were obtained. Of the 2 bands sequenced, one (LaFT1-4-1) was novel.

The technique of DNA microarray could allow expression monitoring of thousands of genes in parallel[16]. This technique promotes the identification of differentially expressed genes and investigation of the function of genes. In this study, human cDNA microarray was used. The genomes of human and rodent were very similar[17,18], the homology of human genes and rat genes was over 70%. So it is of significance to analyse rat samples by a HGEC-40D expression profile microarray. One hundred and thirty-six differentially expressed genes were found by DNA microarray, which included mainly cell signal and transmission genes, genes related to metabolism, protein translation and synthesis genes. These genes accounted for 15%, 14% and 13%, respectively. Analysis on capital genes was described as follows.

Some genes encoding mitochondrial proteins were up regulated. The levels of homo sapiens NADH-ubiquinone oxidoreductase B22 subunit mRNA, ND2 gene, NDUFA5 gene and NDUFS8 gene were elevated 2.543, 3.540, 3.645 and 3.767 fold respectively, which were possibly associated with the damage of mitochondria.

Twelve differentially expressed KIAA genes were found in the study. Eleven were up regulated and one was down regulated. The expression level of KIAA0931 was elevated 23.4-fold. A family of KIAA includes new genes published by Kazusa DNA Research Institute in Japan. The functions of KIAA genes were supposed to be related to cell signal transmission, cell structure and cell movement based on the sequence studies[19-21].

Phosphatidylcholine-specific phospholipase D1a (hPLD), is an important member of cell signal transducers. Active hPLD could produce biological effects by the following mechanisms. Phosphatidic acid (PA), diacyl-glycerol (DG) and lysophosphatidic acid (LPA), which are the direct and indirect products of hPLD, are important second messengers. Hydrolysis of phosphatidyl choline (PC) by hPLD could change local components of the membranes, consequently the characteristics of the membranes[22]. It has been revealed that the process of hydrolysis of PC is related to many physiological activities including metabolism, cell cleavage, secretion, immunity, inflammatory reaction[23]. In this study the expression level of hPLD gene was elevated by 10.1-fold, suggesting that activated hPLD which affects cell signal transmission is an important pathway of La (NO3) 3 toxicity.

Signal transducer and activator of transcription (STAT) proteins play an important role in cell proliferation and differentiation induced by cytokines. STAT1 protein is believed to be the transcription factor of IFN reactivity. In addition, the mice with Stat1 gene picked out were found to be lacking of congenital immunity to viruses and bacteria[24]. Protein inhibitor of activated STAT1 (PIAS1) could depress the activity of STAT1 by blocking STAT1 binding to specific DNA[25]. PIAS1 gene was up regulated 5.3-fold in the study. It was suggested that La (NO3) 3 might affect congenital immunity and the reactivity to IFN.

There were 7 differentially expressed genes related to immunity, of which 6 genes were up regulated and 1 was down regulated. In the up-regulated genes, H12.3 protein gene could regulate lymphocyte proliferation[26]. CD9 antigen gene [27], b-globulin gene, immuno-globulin light chain gene, CD24 signal transducer gene were related to humoral immunity. Calnexin protein gene played a role in cellular immunity and humoral immunity[28]. The results suggested that La (NO3) 3 had effects on both cellular immunity and humoral immunity. This was in good agreement with the results obtained by other researchers[29-31].