AIM: Signal transducers and activators of transcription (STATs) are a family of transcription factors activated in response to cytokines and growth factors. Constitutive activation of Stat3 has been observed in a growing number of tumor-derived cell lines, as well as tumor specimens from human cancers. The purpose of this study was to investigate the expression of p-Stat3, activated form of Stat3, and its downstream mediators including cyclin D1 and Bcl-xL in colorectal carcinoma (CRC), and to explore the possible mechanism of Stat3 signaling pathway in the tumorigenesis of colorectal carcinoma.

METHODS: Tissue samples from 45 patients of primary colorectal carcinoma were selected for studying Stat3 signaling pathway protein expression. Western blot analysis was used to measure the expression of p-Stat3, cyclin D1, and Bcl-xL proteins in colorectal carcinomas. Furthermore, the expression patterns of these proteins were analyzed for their distribution at the cellular level by immunohistochemical staining of the tissues.

CONCLUSION: Constitutive activation of Stat3 may play an important role in the tumorigenesis of colorectal carcinoma, and the detailed mechanism of Stat3 signaling pathway in CRC deserves further investigation.

Colorectal carcinoma (CRC) is a very common malignancy in developed countries and the incidence of CRC has been increasing rapidly in the latter part of the twentieth century in urban China[1,2]. Although there have been advances in surgical and cytotoxic treatments of colorectal carcinoma, the overall survival percentage has not changed in recent years. While significant progresses have been achieved in identifying oncogenes and tumor suppressor genes involved in the tumorigenesis of colorectal carcinoma, the molecular mechanisms in colorectal carcinoma are still poorly understood. Recently, with the delineation of important signal transduction cascades, it has become clear that the signal transducers and activators of transcription (STATs) signaling pathway may play an important role in the malignant transformation of a number of human malignancies[3].

STATs are transcription factors activated in response to cytokines and growth factors. At present, seven STATs have been identified in mammals: Stat1, Stat2, Stat3, Stat4, Stat5a, Stat5 b, and Stat6. Stat5 a and Stat5 b are encoded by distinct genes whereas Stat1 and Stat3 exhibit two isoforms, each resulting from alternative splicing[4]. These proteins have a conserved structural organization and range in size from 750 to 900 amino acids. Activated STATs rapidly translocate into nuclei, bind to recognition sequences in the promoter region of target genes, and regulate their transcription. Recent studies have demonstrated the essential roles of STATs proteins in modulating the process of cell proliferation, differentiation, and apoptosis[5-7].

In the present study, we examined the expression of p-Stat3, the activated form of Stat3, cyclin D1, and Bcl-xL in 45 primary tumor samples obtained from patients with CRC. Our results demonstrate that constitutive activation of Stat3 signaling pathway may play an important role in the tumorigenesis of colorectal carcinoma. Furthermore, activation of Stat3 is correlated with the overexpression of cyclin D1 in colorectal carcinoma.

Primary colorectal adenocarcinomas and adjacent normal mucosae distant from the tumor (5-10 cm away) were obtained from 45 patients undergoing colorectal cancer resection at the Department of Surgery, Peking University People’s Hospital from February, 1999 to February, 2000. No patient had received chemotherapy or radiation therapy before surgery. The samples were collected after informed consent was obtained from the patients at the time of surgery. Malignant tissues and adjacent normal mucosae were immediately snap-frozen in liquid nitrogen within 15-20 min after surgical removal to ensure preservation of Stat3 activities. Detailed clinicopathological parameters including gender, age, site of primary tumor, stage, and degree of differentiation are shown in Table 1. Staging of the tumors was conducted according to the American Joint Committee on Cancer (AJCC)/International Union Against Cancer (UICC) TNM Classification after brief histological studies.

Tissue samples were fixed in 40 g/L buffered formaldehyde, and embedded in paraffin. Five-micrometer sections of normal mucosa and colorectal carcinoma were cut and mounted onto poly-L-lysine-coated glass slides, air-dried, and heated for 2 h at 60 °C in an oven. The sections were dewaxed in xylene, rehydrated in descending alcohols, and endogenous peroxidase activity was blocked using 3 mL/L H2O2-methanol solution. These sections were then subjected to an antigen retrieval procedure; slides were heated in citrate buffer 10 mmol/L (pH 6.0) for 10 min. The sections were then cooled and washed in phosphate-buffered saline (pH 7.4) and nonspecific binding sites were blocked by incubating with 50 mL/L goat serum for 30 min in a humidified chamber at room temperature. The slides were incubated at 4 °C overnight with appropriate primary antibody [Stat3 (C-20), dilution 1:75; p-Stat3 (B-7), dilution 1:150; cyclin D1 (M-20), dilution 1:100; Bcl-xL (H-62), dilution 1:100]. Immunologic reaction was developed using 3-3-diaminobenzidine in TBS containing 0.2 mL/L hydrogen peroxide. The slides were counterstained with hematoxylin. Negative controls were performed by substituting the primary antibody with Tris-buffered saline.

One objective was to determine whether Stat3 was constitutively activated in human colorectal carcinoma and whether activation of Stat3 correlated with various clinicopathological parameters in patients with CRC. To determine whether Stat3 was activated in CRC, we performed Western blot analysis using antibody to p-Stat3, activated form of Stat3. Representative cases are shown in Figure 1. Of the 45 CRC samples examined, 57.8% (26 of 45) of the samples showed strong p-Stat3 expression. Quantitative evaluation of the relative expression (tumor versus normal mucosae) of these experiments demonstrated an average 2.6-fold increase in the level of p-Stat3 protein in cancers compared with adjacent normal mucosae (P = 0.002, Table 2). Both cytoplasmic and nuclear localizations of the Stat3 (p-Stat3) were detected in CRC primary tumors (Figure 2). When we examined possible correlations with various clinicopathological parameters, we found that increased levels of p-Stat3 were significantly correlated with the existence of nodal metastasis (P = 0.018). We also found that the levels of p-Stat3 were increased in stages III and IV, whereas its levels were decreased in stages I and II (P = 0.026). No statistically significant correlation was observed between p-Stat3 expression and gender, age, primary site, size, and grade of tumors (Table 3). 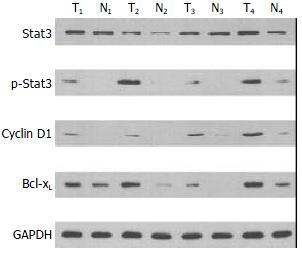 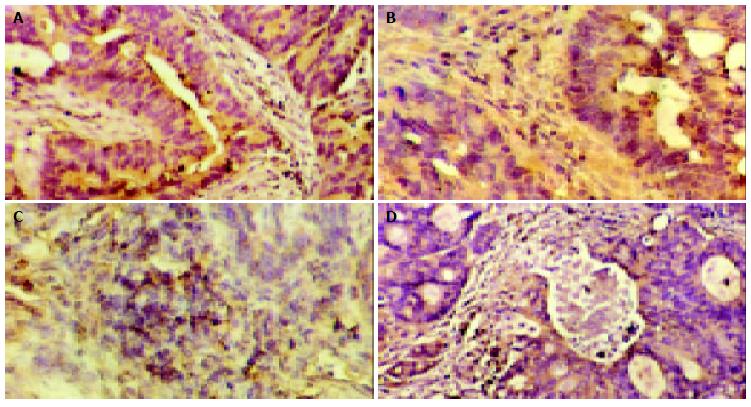 Though significant progresses have been achieved in delineating the molecular mechanisms of colorectal carcinoma tumorigenesis, specific signal transduction pathways involved in CRC have not been fully characterized[21]. Increasing reports suggested that Stat3 signaling pathway played a critical role in malignant transformation and tumor progression[3]. Constitutive activation of Stat3 has been detected in a wide variety of human primary tumors and tumor cell lines including blood malignancies, breast cancer, and other cancers[8-13]. In the current study, we provided evidences that constitutive activation of Stat3 signaling might play an important role in human colorectal carcinoma.

Western blot analysis with p-Stat3 antibody showed that the activated form of Stat3 was elevated in the majority (57.8%) of CRC samples. Both cytoplasmic and nuclear localizations of Stat3 (p-Stat3) were also detected in CRC primary tumors. Nagpal et al[22] reported in their work on head and neck carcinomas that 58.9% (53/90) of HNSCC tumors showed very high Stat3 protein accumulation, and none of the normal epithelium samples showed Stat3 absence. Campbell et al[23] found that in 51 human primary tissues from normal prostate, benign prostatic hyperplasia, and prostate cancer, p-Stat3 was observed more prominently in the nuclei of cells residing in malignant glands compared to those in nonmalignant samples. As previously discussed, there were a growing number of evidences associating constitutive or aberrant activation of Stat3 with human cancers. The presence of p-Stat3 and its up-regulation in colorectal carcinoma could have important implications in colorectal cancer biology.

Because the above results provided evidence that Stat3 was constitutively activated in colorectal carcinomas, it was of interest to determine whether activation of stat3 correlated with various clinicopathological parameters in patients with CRC. When we examined possible correlations with various parameters, we found that increased levels of p-Stat3 significantly correlated with the existence of nodal metastasis and its stage but not with other parameters. Masuda et al[19] indicated in their work on HNSCC, that elevated levels of the activated form of Stat3 had a significant association with the clinical stage of HNSCC. Ni et al[24,25] demonstrated that Stat3 DNA binding activity was correlated with malignant potential in both human prostate cancer cell lines and a large series of rat Dunning prostate cancer cell lines. The most aggressive cell lines were found to have the highest Stat3 DNA binding activities. Blockade of activated Stat3 by dominant-negative Stat3 constructs significantly suppressed their growth in vitro and tumorigenicity in vivo. This specific activation of Stat3 in the tumorigenesis of colorectal carcinoma could qualify it as a potential diagnostic marker.

Another important downstream mediator is Bcl-xL. Bcl-xL is a member of Bcl-2 family that could play a critical role in apoptosis[31]. Previous studies showed that Bcl-xL was overexpressed in colorectal carcinomas, and Bcl-xL might be a useful prognostic marker in CRC[32,33]. We also found that Bcl-xL was overexpressed in CRC tissues, but the increased protein level did not significantly correlate with the clinicopathological parameters in CRC. No statistically significant correlation was observed between p-Stat3 and Bcl-xL expressions. Bromberg et al[16] observed that Stat3 could transcriptionally up-regulate the expression of Bcl-xL in Stat3 transformed cell lines. Evidence suggested that blocking of the activated Stat3 in multiple myeloma cells and ovarian cancer cells could down-regulate the expression of Bcl-xL and enhance the apoptosis, and the cells regained the sensitivity to chemotherapy[9,20]. The precise mechanism by which activation of Stat3 enhances the transcription of Bcl-xL in CRC remains to be determined.

Our results demonstrated that in comparison with normal mucosae, p-Stat3 protein was overexpressed in human colorectal carcinomas. Expression of p-Stat3 was associated with the presence of nodal metastasis and its stage. Our clinical data also provides evidence that there is a strong association of p-Stat3 and cyclin D1 overexpression in CRC. These results suggest that constitutive activation of Stat3 signaling pathway may play an important role in the tumorigenesis of colorectal carcinoma, and the detailed mechanism of Stat3 signaling pathway in CRC deserves further investigation.