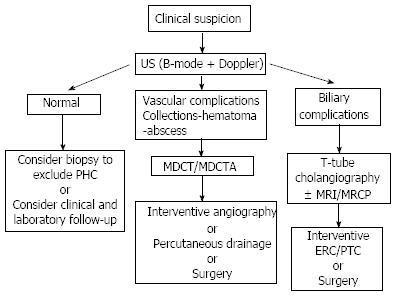 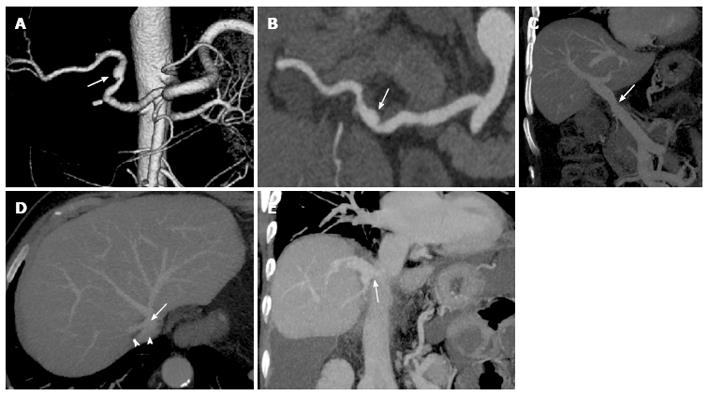 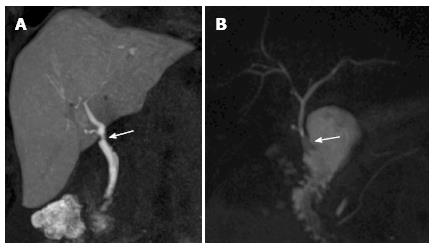 Figure 4 Biliary anatomy after liver transplant on magnetic resonance cholangiography images. A: End-to-end anastomosis (arrow) between the donor common bile duct and the recipient common hepatic duct, as shown in this coronal T1-weighted magnetic resonance cholangiography (MRC) obtained after iv administration of an hepatobiliary contrast agent (gadoxetic acid); B: In the case of technical challenge, re-transplantation or primary sclerosing cholangitis as the cause of the transplant, choledochojejunostomy using a Roux-en-Y anastomosis (arrow) is performed, as shown in this maximum intensity projection reconstruction from a T2-weighted, 3D MRC examination.

Figure 5 Normal postoperative fluid after liver transplant. Coronal (A) and axial (B, C) T2-weighted single-shot turbo-spin echo magnetic resonance images acquired in a 48 year-old male few days after the intervention show a large fluid collection in the right subhepatic space (arrowheads in A) and a small amount of free fluid in the perihepatic and perisplenic space (arrowheads in B). It is not infrequent to observe a small fluid collection in the retrohepatic space, around the cavo-caval anastomosis (arrowheads in C).

Figure 10 Pseudoaneurysm of the hepatic artery following angioplasty in a 63-year-old male transplanted patient. A: Color Doppler examination shows a cystic formation near the hepatic artery, with a complex flow waveform related to partial thrombosis: high velocity peaks (blood inflow) are followed by diastolic reversal flow (outflow); B: Pseudoaneurysm has been confirmed by digital subtraction angiography by showing contrast filling. 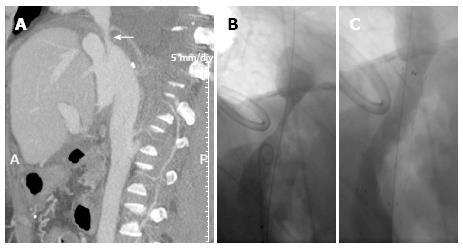 Figure 12 Caval stenosis in a 54-year-old patient. Sagittal maximum intensity projection reconstruction from multidetector computed tomography (A) shows a supranastomotic stenosis of the inferior vena cava (arrow) that is confirmed in the angiogram before (B) and after (C) stenting. A: Anterior; P: Posterior.

Figure 13 Biliary strictures on coronal maximum intensity projection reconstructions from volumetric magnetic resonance cholangiography. A: Anastomotic stricture at the middle third of the extrahepatic bile duct in a 53-year-old female patient, with biliary dilation upstream; B: Anastomotic stricture extended to the proximal hepatic duct (arrowheads) in a 62 year-old patient with patent hepatic artery.

Figure 15 Recurrence of hepatocarcinoma in a 65-year-old human B virus infected male transplanted patient. On the subtracted arterial phase magnetic resonance imaging (A) two mildly hypervascular lesions are visible in the extrahepatic region, between the stomach and left diaphragm (arrows). Lesions, that were histologically confirmed to be hepatocellular carcinoma, show absence of contrast wash-out on the venous phase (arrows in B) and hepatocellular contrast uptake in the hepatospecific phase (arrows in C). A regenerative nodule with intense contrast uptake is visible in the hepatospecific phase only (arrowhead in C).