Primary non-Hodgkin’s lymphoma of the frontal sinus is extremely rare. In addition, Epstein-Barr virus (EBV) has been reported to play a role in the development of human immunodeficiency virus (HIV)-related malignant lymphomas. To the best of our knowledge, there is no report for the HIV-associated, EBV-positive primary diffuse large B-cell lymphoma (DLBCL) in the frontal sinus.

Through this article, we suggest that EBV-positive DLBCL should be considered as possible diagnosis for patients with nonspecific space-occupying lesion of the paranasal sinuses. We also highlight an importance of clinical suspicion in diagnosing HIV infection because HIV serology is not routinely tested in patients with paranasal sinus problem.

Core Tip: Primary diffuse large B-cell lymphoma in the frontal sinus is extremely rare. It can mimic complicated sinusitis and may be easily overlooked at the initial diagnostic workflow in the clinical practice. When we meet the frontal sinus opacification with combined overlying soft tissue swelling, it is important for the radiologists and clinicians to include the following disease entity in the differential diagnosis based on imaging findings; complicated sinusitis (Pott’s puffy tumor), unilateral non-Hodgkin’s lymphoma and destructive metastasis. Awareness and clinical suspicion of this disease are necessary for making an accurate diagnosis and appropriate treatment, particularly in patients with a history of sinusitis which does not response to medical treatment, or in human immunodeficiency virus-positive patients.

A 44-year-old male presented with the right forehead pain.

His medical history was unremarkable and there was no history of fever and palpable cervical lymphadenopathy, but he described mild weight loss and fatigue.

The patient’s personal and family history was unremarkable. 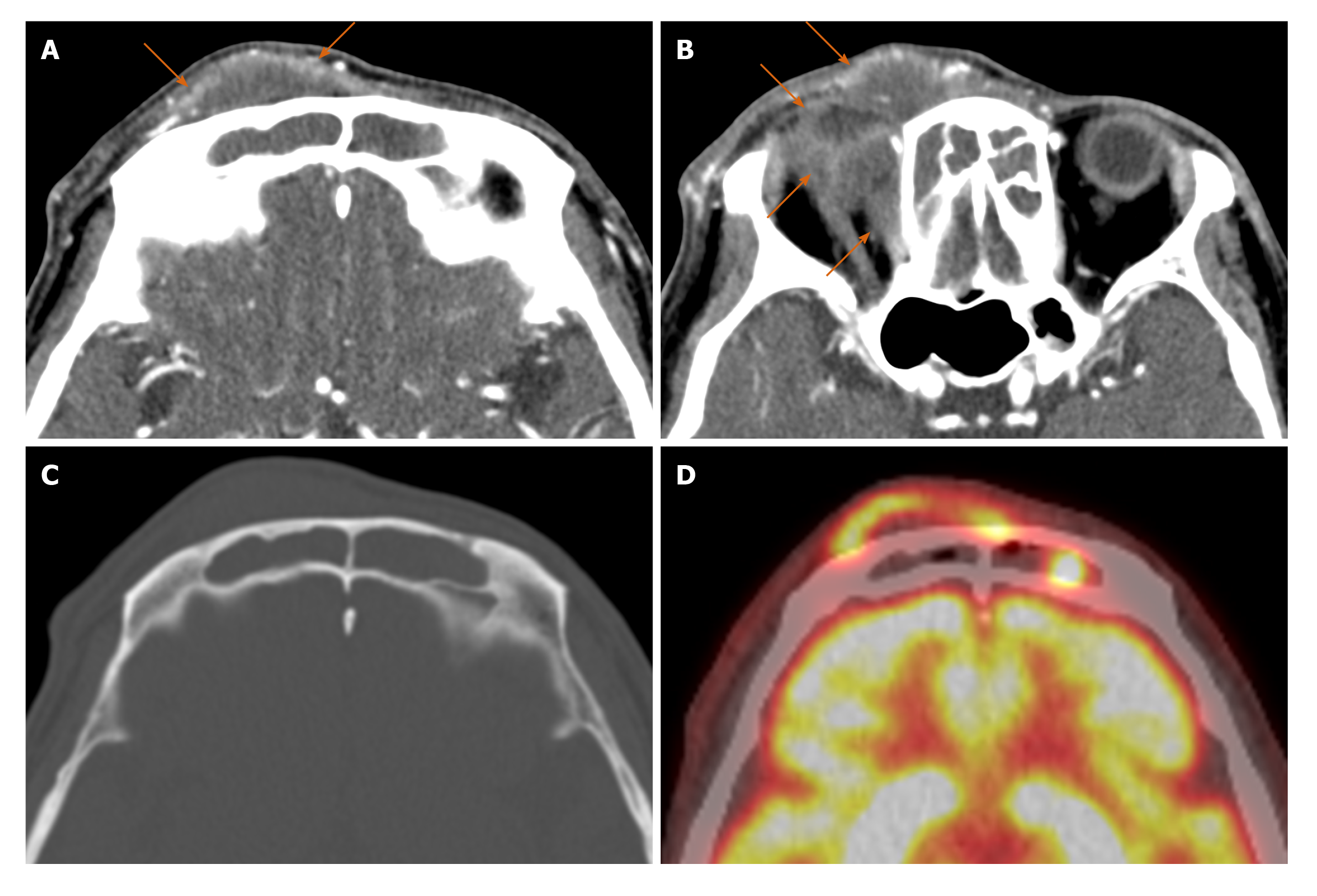 Figure 1 A 46-year-old male presented with the right forehead pain. A and B: Axial contrast enhanced paranasal sinus computed tomography (CT) shows fluid-like opacification in both frontal sinuses with combined soft tissue lesion in the right forehead and medial portion of the right orbit. There is mild marginal enhancement around the soft tissue lesion without enhancing solid component; C: There is no definite bone erosion in the anterior wall of the right frontal sinus; D: F-18 fluorodeoxyglucose (FDG) positron emission tomography/CT shows irregularly increased FDG uptake with maximum standardized uptake value of 14.4 g/mL in the marginal portion of the right forehead lesion which corresponds to marginal enhancement on paranasal CT.
Preoperative laboratory examination 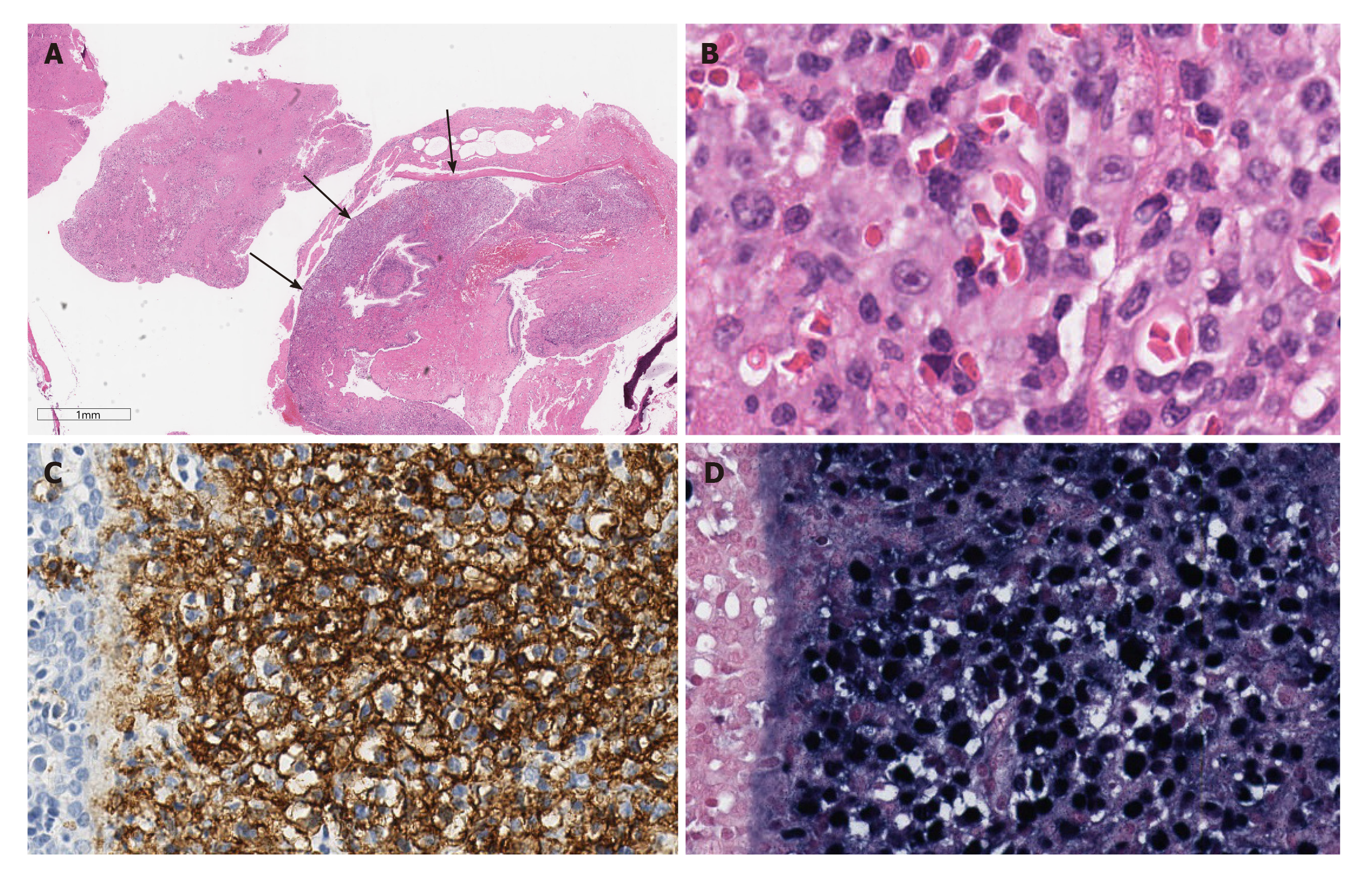 Additional F-18 fluorodeoxyglucose (FDG) positron emission tomography (PET)/CT was performed for evaluating initial stage, and the lesions showed high FDG uptake with maximum standardized uptake value of 14.4 g/mL (Figure 1D). There was no significant hypermetabolic lesion to suggest lymphoma involvement beneath the diaphragm on F-18 FDG PET/CT. He was at stage II according to the Ann Arbor staging system, and international prognostic index was 1 point.

The patient underwent chemotherapy for treatment of DLBCL.

About 4 mo after the diagnosis of EBV-positive DLBCL, the patient passed away in 2 wk of chemotherapy from pneumonia and sepsis by cytomegalovirus infection.

Primary malignancies in the frontal sinus are rare, reportedly accounting for about 1.0% of sinonasal malignancies[12]. In the previous study[12], squamous cell neoplasm was the most common histologic subtype (39.8%), followed by NHL (18.7%), epithelial neoplasm not otherwise specified (10.5%) and adenocarcinoma (9.9%). Manifestations of frontal sinus malignancies are often nonspecific, thus leading to a misdiagnosis for benign diseases such as sinusitis, mucocele, or osteomyelitis. It is known that the overall prognosis for patients with frontal sinus malignancies was poor, with a 5-year survival rate of 31%-50%[13].

Of the primary sinonasal malignancies, NHL is rare, estimated to be between 0.2% and 2.0% of all NHLs[1,2]. Most of them occur in the maxillary sinuses, followed by the ethmoid sinuses and the nasal cavity. NHL in frontal sinus is an extremely rare condition[3]. DLBCL is the most common subtype of NHL worldwide, generally representing 30%-40% of all cases in different geographic regions[8]. To date, only 18 cases of primary DLBCL in the frontal sinus have been reported in the existing English-language literature[4-7]. Therefore, knowledge of the frontal sinus DLBCL is limited.

Diagnosis of paranasal lymphoma is usually delayed in daily practice because the early stage is often asymptomatic or nonspecific, and a complete investigation is postponed until the tumor mass produces obvious symptoms[14]. The previous studies demonstrated that clinical manifestation of DLBCL in the frontal sinus were common symptoms owing to the direct effect of tumor mass such as frontal headache, facial swelling, nasal discharge or nasal obstruction[4-7]. In the previous studies, imaging findings showed nonspecific opacification of the involved sinus with or without expansion or enhancement. In the current case, CT images demonstrated dense opacification of the right frontal sinus with minimal bony erosion and combined overlying soft tissue swelling, but with no definitely enhancing component. These findings were common radiological features of complicated sinusitis, therefore, not leading to a diagnosis of malignant lymphoma. In addition to CT findings, increased ESR and CRP of serum inflammatory markers made the diagnosis more indicative of nontumorous inflammatory conditions in our case.

In addition, it is well-known that HIV-infected patients have higher rates of malignant lymphomas compared with the general population, and DLBCL is the most common subtype of lymphoma in HIV patients[9,10]. HIV contributes to lympho-magenesis by several different mechanisms as follows: genetic alterations, induction of chronic B-cell activation by immune dysfunction, and loss of immunoregulatory control of oncogenic herpesviruses like EBV and Kaposi sarcoma-associated herpes-virus[15]. In addition, EBV, also known as human herpesvirus 4, is one of the most common human viruses, with about 95% of the world’s population showing an asymptomatic life-long carrier status. EBV infects memory B cells, which are the EBV reservoir in healthy individuals, and the disruption of this regulated balance between virus and host immune system can result in EBV-associated B cell lympho-proliferation[16]. In HIV patients, EBV has been reported to play a role in the development of HIV-related malignant lymphomas which has been identified in 30%-90% of DLBCL[11,17-19]. On imaging study, most EBV-related lymphomas show atypical image features including propensity for extranodal involvement and extensive tumor necrosis[20]. Therefore, EBV-related sinonasal lymphoma is more difficult to diagnose on imaging study owing to its atypical imaging features as in this case, compared to typical lymphoma that exhibit homogeneous nature. In the present case, we found that HIV testing was positive on preoperative laboratory tests before the endoscopic sinus biopsy. In addition to clinical rarity of the primary frontal sinus DLBCL, our case suggests that clinical suspicion is the most important for diagnosing HIV-associated, EBV-positive DLBCL because HIV serology is not routinely tested in patients with paranasal sinus problem.

DLBCL is very rare but can occur in the frontal sinus. Like the present case, it can mimic complicated sinusitis and may be easily overlooked at the initial diagnostic workflow in the clinical practice. When we meet the frontal sinus opacification with combined overlying soft tissue swelling, it is important for the radiologists and clinicians to include the following disease entity in the differential diagnosis based on imaging findings; complicated sinusitis (Pott’s puffy tumor), unilateral NHL and destructive metastasis. Awareness and clinical suspicion of this disease are necessary for making an accurate diagnosis and appropriate treatment, particularly in patients with a history of sinusitis which does not respond to medical treatment, or in HIV-positive patients.