Herein, we report a 55-year-old male patient with stage IV NSCLC harboring a rare EGFR L833F-L861Q compound mutation in cis. The patient achieved a partial response to first-line treatment with afatinib and a progression-free survival of 10 mo. After afatinib failure, the patient received multiple line treatments with chemotherapy. Upon disease progression, the heavily pretreated patient was treated with osimertinib and bevacizumab, and both lung lesion and brain metastases were stable for more than 3 mo. He had an overall survival of 25 mo.

Epidermal growth factor receptor (EGFR) tyrosine kinase inhibitors (TKIs) have been adopted as the standard of care for non-small cell lung cancer (NSCLC) patients harboring EGFR sensitizing mutations. Besides the two common mutations exon 19 deletion and L858R, which together comprise approximately 85% of EGFR mutations in NSCLC[1], rare EGFR mutations also exist, including point mutations, deletions, and insertions spanning EGFR exons 18-25. However, the responsiveness of these uncommon mutations to EGFR TKIs has not been well elucidated and attracts increasing interest.

Located within EGFR exon 21, L861Q accounts for approximately 3% of EGFR mutations in NSCLC[2]. L861Q often exists as a single mutation, while under rare circumstances, it occurs concomitantly with other EGFR mutations (mostly with G719X)[3]. Post hoc analysis of LUX lung trials showed a response rate of 56% and a median progression-free survival (PFS) of 8.2 mo for afatinib treatment in L861Q mutant positive patients[4], which ultimately drove the Food and Drug Administration approval for afatinib for NSCLC harboring this mutation. L833F, a more rare EGFR mutation, has only been reported in a few cases[5]. The therapeutic relevance of L833F remains largely unknown.

In the present study, we describe a stage IV NSCLC patient harboring a rare EGFR L833F-L861Q compound mutation in cis, who benefited from osimertinib after progressing on afatinib treatment and multiple lines of chemotherapy.

A 55-year-old man with a 30-year smoking history (1 pack/d) was admitted to our hospital with the chief complaint of a hoarse voice.

The patient’s symptoms started 3 mo ago.

The patient denied any history of present illness.

No personal or family history was reported. 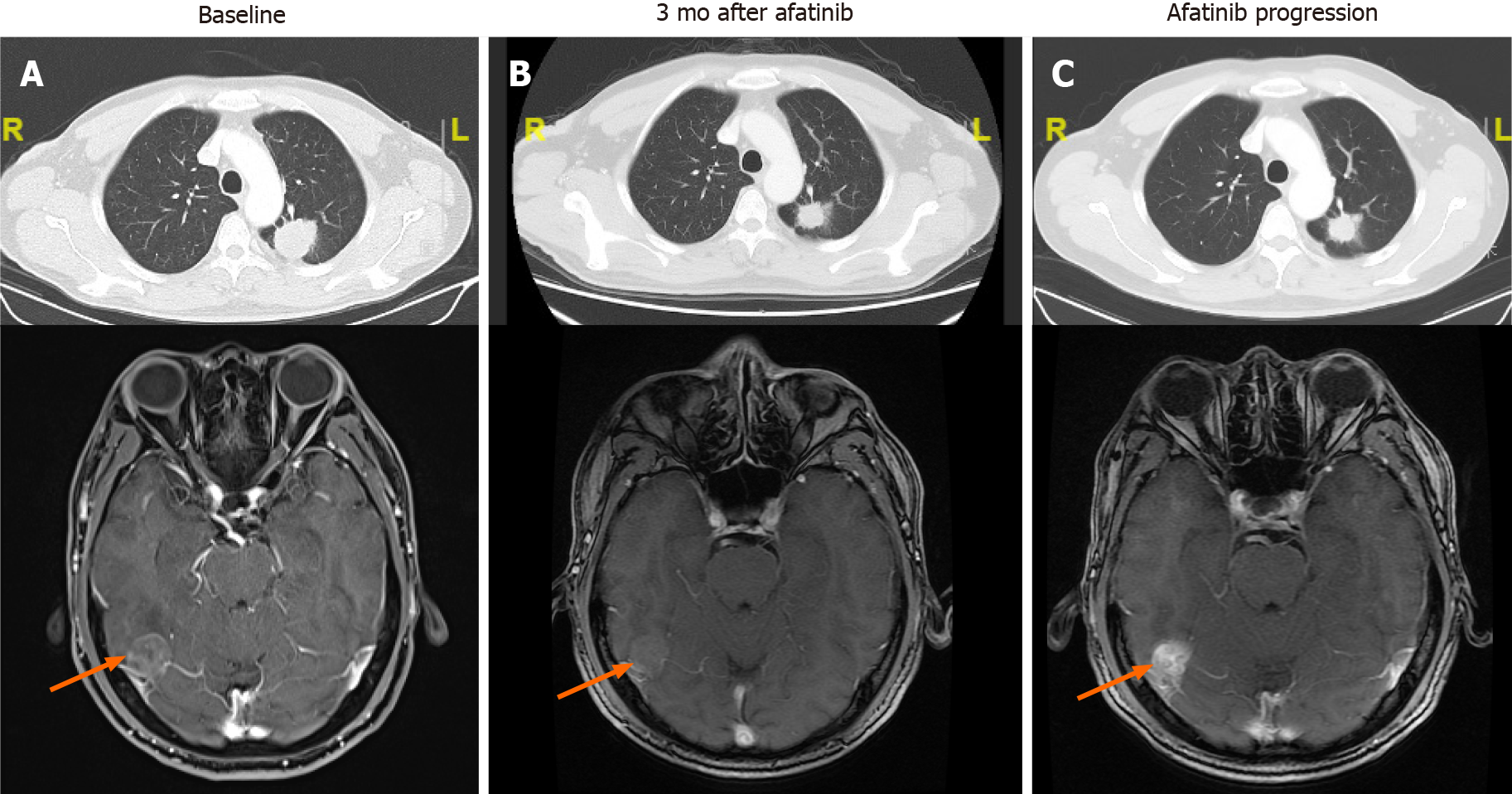 The patient’s treatment history is summarized in Figure 2A. The patient started first-line treatment with afatinib (40 mg qd) in October 2018. Three months later, a chest CT scan showed shrinkage of the lung lesion (from 4 cm to 2.8 cm in diameter, Figure 1B) and a partial response (PR) was evaluated according to the Response Evaluation Criteria in Solid Tumors 1.1 (RECIST 1.1). In August 2019, the lung lesion remained as PR but brain MRI revealed a progressive disease (PD) on the right occipital lobe lesion (Figure 1C). The patient received MRI-guided brain stereotactic radiosurgery in August and September 2019. Disease progression was observed on brain lesions in October 2019 when the lung lesion remained stable. He subsequently underwent a combined treatment of afatinib (40 mg qd) and bevacizumab (15 mg/kg) but brain metastases progressed rapidly. Next-generation sequencing (NGS) was performed with the re-biopsy of lung lesion at PD using a capture-based panel including 168-cancer related genes (Burning Rock Biotech, Guangzhou, Guangdong Province, China) and identified EGFR L833F (allele frequency: 43.02%) in cis with L861Q (allele frequency: 40.77%) (Figure 2B). TP53 L194_I195delinsV and CCNE1 amplification (copy number: 9.2) were also detected. From December 2019, the patient received six cycles of bevacizumab + pemetrexed + carboplatin (BAC) chemotherapy and achieved stable disease (SD) with a PFS of 4 mo. After PD, he was switched to docetaxel for four cycles (cycle 1: 140 mg d1; cycles 2-4: 110 mg d1 q3w) and brain lesions progressed. In May 2020, a regimen of docetaxel (110 mg d1) and bevacizumab (15 mg/kg) was administrated and a PD was observed (Figure 3A). Starting from June 2020, the patient received the combinatorial treatment of osimertinib (160 mg, qd) and bevacizumab (15 mg/kg). 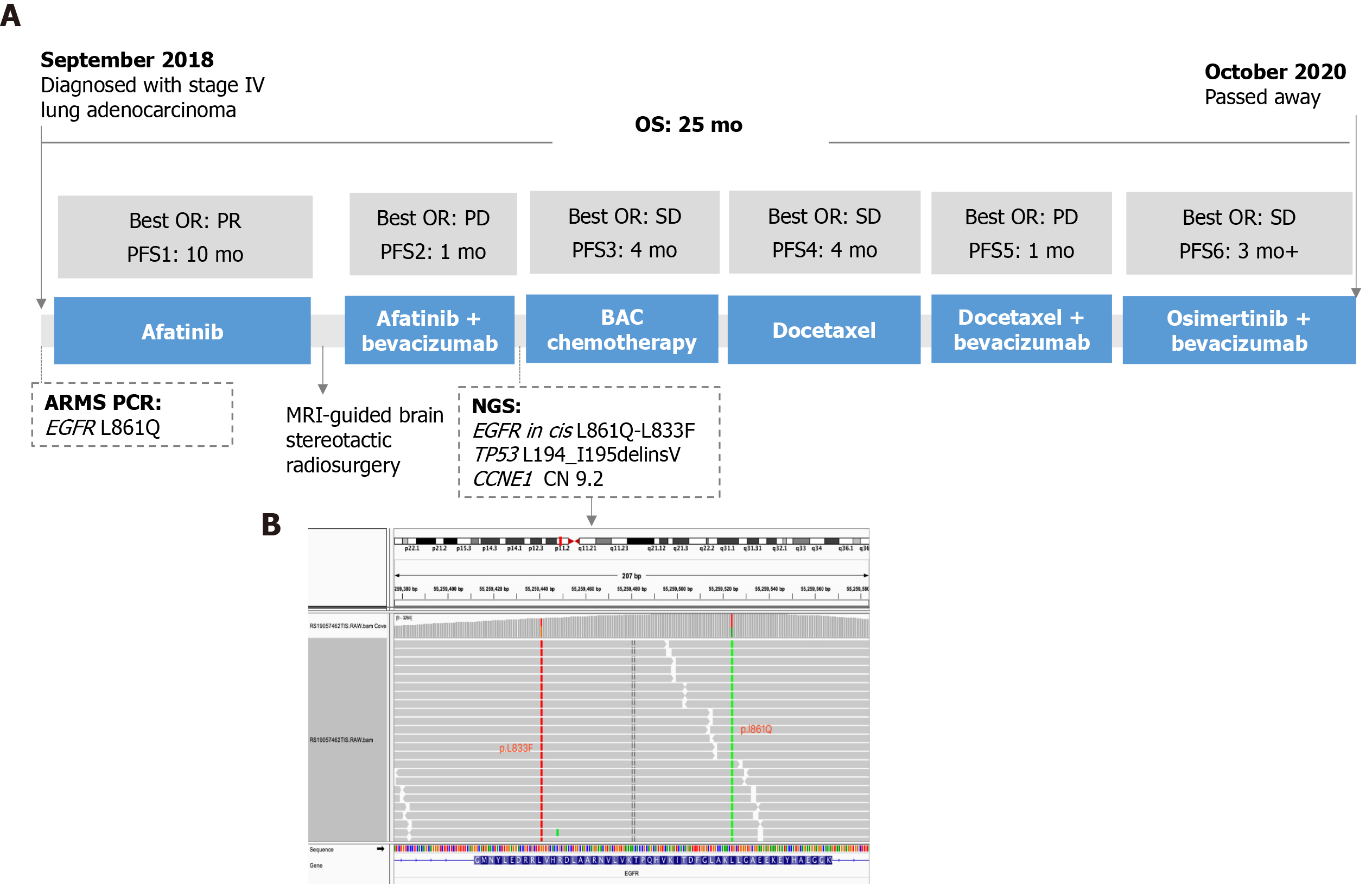 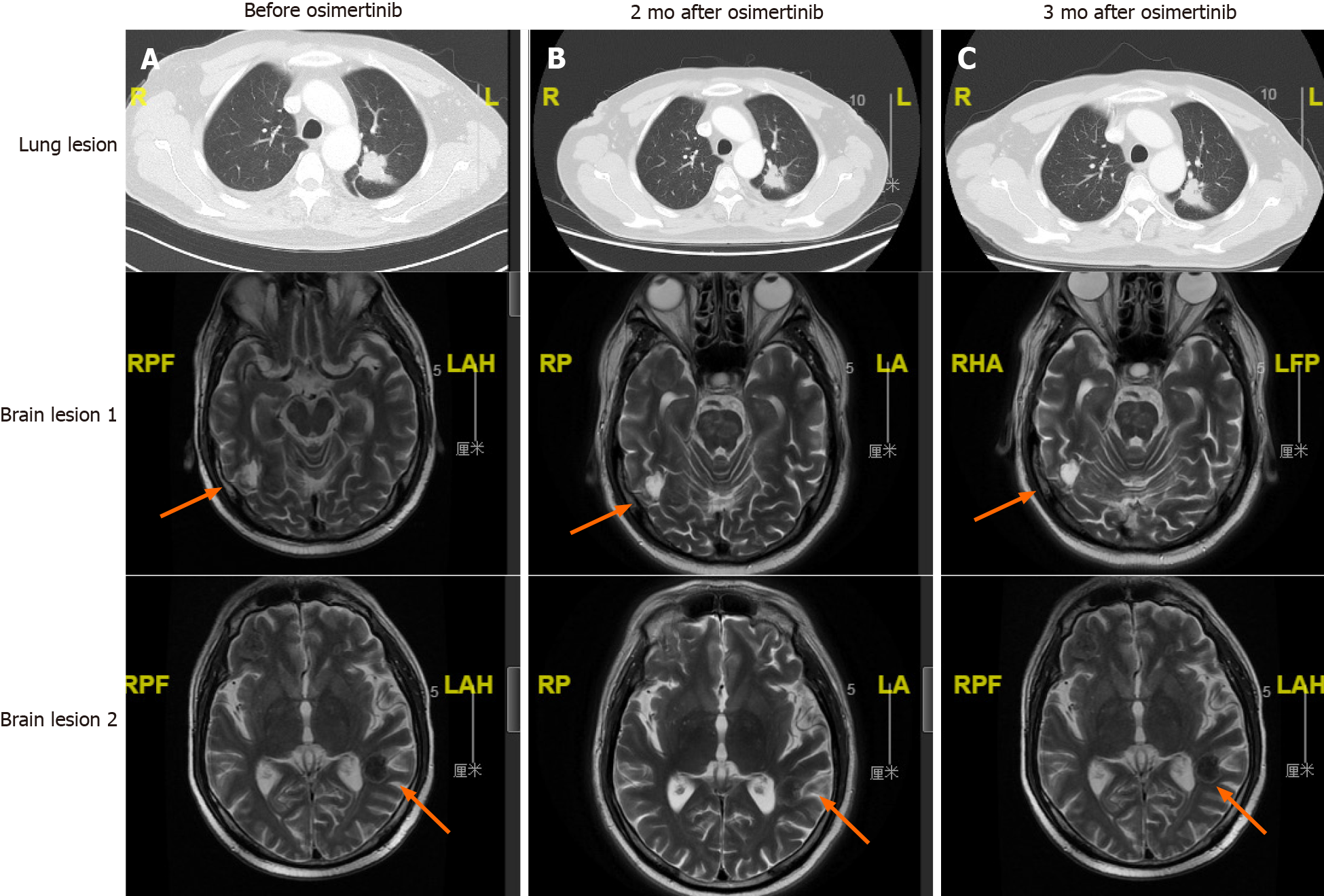 After two cycles of treatment, the patient achieved shrinkage on the lung lesion which was evaluated as SD and brain lesions were stable (Figure 3B). The disease remained stable until the last flow-up in September 2020 (Figure 3C). The patient passed away in October 2020. He achieved a PFS of more than 3 mo and an overall survival of 25 mo.

In the present case, NGS detected an L833F-L861Q compound mutation in cis after afatinib failure. However, according to the two allele frequencies (Figure 2B), it is deduced that this compound mutation actually presented at baseline before afatinib treatment, which ARMS-PCR failed to detect. The results support the advantage of NGS over PCR-based methods for detecting more complex mutations. PCR can only detect known mutations and those for which the PCR primers are designed, while NGS is able to simultaneously identify multiple mutations including unknown ones and reveal the configuration in the case that mutations are present within one sequencing read. NGS can also detect some structure rearrangements that might also serve as therapeutic targets for patients (ALK, RET fusion, etc.). Therefore, NGS is strongly recommended if conventional methods fail to detect any actionable alterations.

Our case demonstrated a durable response of 10 mo to first-line treatment with afatinib, suggesting the clinical activity of this TKI against the rare compound mutation L833F-L861Q. In line with our observation, a pooled analysis revealed that afatinib resulted in an objective response rate (ORR) of 77.1% and a median time to treatment failure (TTF) of 14.7 mo [95% confidence interval (CI): 6.8-18.5 mo] in EGFR TKI–naive patients harboring compound mutations[6]. A recent retrospective study also shows that afatinib is associated with a more favorable PFS compared with gefitinib [hazard ratio (HR) = 2.01; 95%CI: 1.11-3.62] and erlotinib [HR = 2.61; 95%CI: 1.31-5.22] in patients with EGFR compound mutations[7]. Especially in those with uncommon patterns (without 19 deletion and L858R), afatinib yielded a higher response rate (afatinib vs gefitinib vs erlotinib: 78.9% vs 38.9% vs 20.0%, P = 0.013) and significantly longer PFS (afatinib vs gefitinib vs erlotinib: 10.5 mo vs 3.0 mo vs 0.9 mo).

Li et al[5] reported a stage IV lung adenocarcinoma patient harboring EGFR L833F-L861R compound mutation, who achieved a PFS of 193 d to gefitinib treatment. In another study, icotinib resulted in a 0% response rate and a 100% disease control rate in L833F positive NSCLC patients with a median PFS of 4.2 mo[8]. An in vivo study has shown that L861Q retains sensitivity to both afatinib and osimertinib[2]. In a phase II trial (KCSG-LU15-09) to investigate osimertinib efficacy in NSCLCs with uncommon EGFR mutations, the ORR and median PFS were 78% and 15.2 mo, respectively, in the nine L861Q-positive patients (7 with L861Q single mutation and 2 with L861Q-G719X compound mutation)

A recent retrospective study recruiting 51 NSCLC patients with uncommon EGFR mutations (including 2 with L833F-L861Q) showed a median time of 7.1 mo on osimertinib treatment. However, the detailed clinical outcomes of the two L833F-L861Q positive patients were not described[9]. In our case, the L833F-L861Q mutant patient achieved SD on the osimertinib + bevacizumab regimen. Of note, our case had brain metastases and was heavily pre-treated. This might in part explain the short duration of effectiveness of the osimertinib regimen.

In conclusion, our case revealed that both afatinib and the osimertinib + bevacizumab combination demonstrated clinical efficacy in NSCLC harboring an EGFR L833F-L861Q compound mutation. The results provide more options for the clinical management of patients with rare compound mutations.