Post-transplant lymphoproliferative disease (PTLD) is the most common malignant tumor that occurs after kidney transplantation in children, and is associated with Epstein-Barr virus (EBV).

We report a case of PTLD that occurred in a 17-year-old female patient at 5 mo post-transplant. The first symptom was abdominal pain accompanied by fever, nausea, and vomiting. EBV-associated monomorphic PTLD with multiple abdominal nodules was diagnosed by pathology, clinical manifestations, imaging results, and the presence of EB-DNA. After successful treatment with rituximab, the abdominal nodules in the spleen and liver disappeared.

Early pathological biopsy to confirm the diagnosis is critical to treatment and prognosis. Reducing immunosuppression and rituximab therapy are effective methods for treating PTLD, but need to be initiated as early as possible.

Core Tip: Post-transplant lymphoproliferative disease (PTLD) is related to Epstein-Barr virus infection, but early onset and monomorphic PTLD in childhood kidney transplantation is rare. This case suggests that virological evaluation must be strengthened before and after kidney transplantation in children, and early pathological biopsy to confirm the diagnosis is critical to treatment and prognosis. Rituximab therapy combined with adjusting the immunosuppressive regimen are effective in pediatric kidney transplantation.

A 17-year-old female was hospitalized with complaining of abdominal pain, a fever of 38 °C, nausea, and vomiting for 4 d on June 2019.

Four days before admission, the patient presented with lower abdomen pain accompanied by fever, nausea and vomiting, and went to the emergency room of our hospital. Computed tomography (CT) examination showed splenic mass, diffuse thickening of the small intestine wall in the left abdominal cavity, subcutaneous nodules in the right iliac fossae, and peritoneal effusion.

The recipient was diagnosed with allergic purpura in 2012. The disease progressed to end-stage renal disease and received dialysis in 2017. In January 2019, she underwent kidney transplantation with panel-reactive antibody(-), complement-dependent cytotoxicity(-). Balineximab was used for induction therapy. The kidney donor was a 22-year-old male who suffered from a head injury in a traffic accident. Laboratory results showed that the donor was EB virus antigen IgG-negative, EB virus shell antigen IgG-positive, EB virus shell antigen IgM-negative, cytomegalovirus (CMV) DNA < 400 copies/mL, BK virus DNA < 5000 copies/mL, procalcitonin < 0.05 ng/mL, IgG test < 60 pg/mL, and blood culture negative. A sputum culture was positive for Corynebacterium and a urine culture was positive for Staphylococcus haemolyticus. The graft showed good function during the perioperative period, under the immunosuppression of FK506 + mycophenolate mofetil (MMF) + Pred. However, by 18 d post-operation, the patient’s urine volume had progressively decreased to 150 mL/24 h, and creatinine increased from 91 μmol/L to 288 μmol/L. The patient did not respond to methylprednisolone, and her high flow rate through a renal artery anastomosis was monitored by contrast-enhanced ultrasound. The graft was rescued by successful balloon dilatation of the distal end of the renal artery, after which, the patient’s urine output returned to normal, and her creatinine (Cr) level returned to 108 μmol/L at 25 d post-operation. 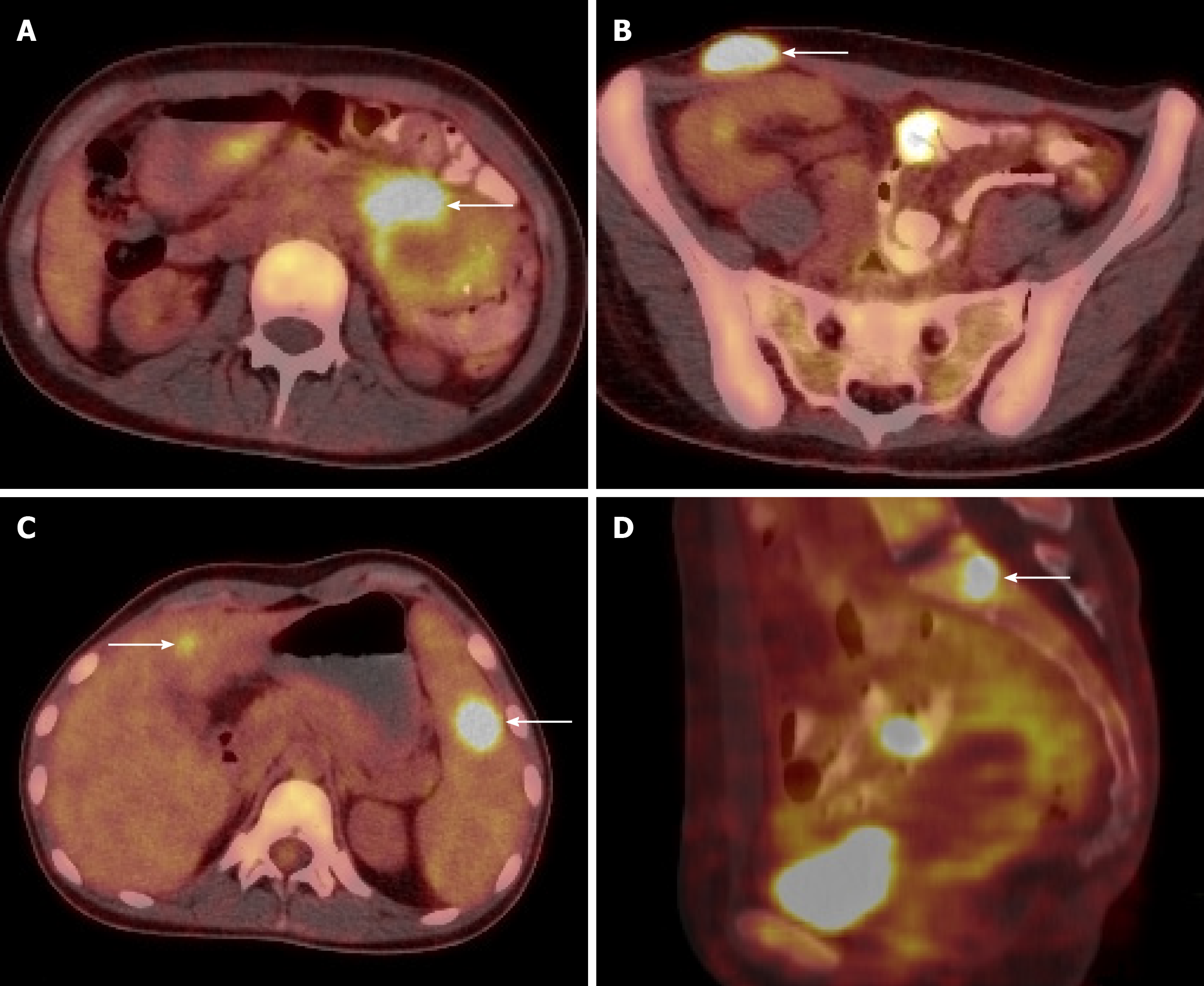 Figure 1 Positron emission tomography/computed tomography: High metabolism. A: In the intestinal wall; B: In right iliac subcutaneous nodule; C: In the spleen and liver; D: In the S1 vertebral body.
FINAL DIAGNOSIS

Based on pathological biopsy and medical history, the patient was diagnosed as monomorphic PTLD with immunohistochemical positive: EBV-encoded small RNAs(+), cluster of differentiation 38 CD38(+), CD20(+), CD3(+), and Ki67 index of 45% (Figure 2). 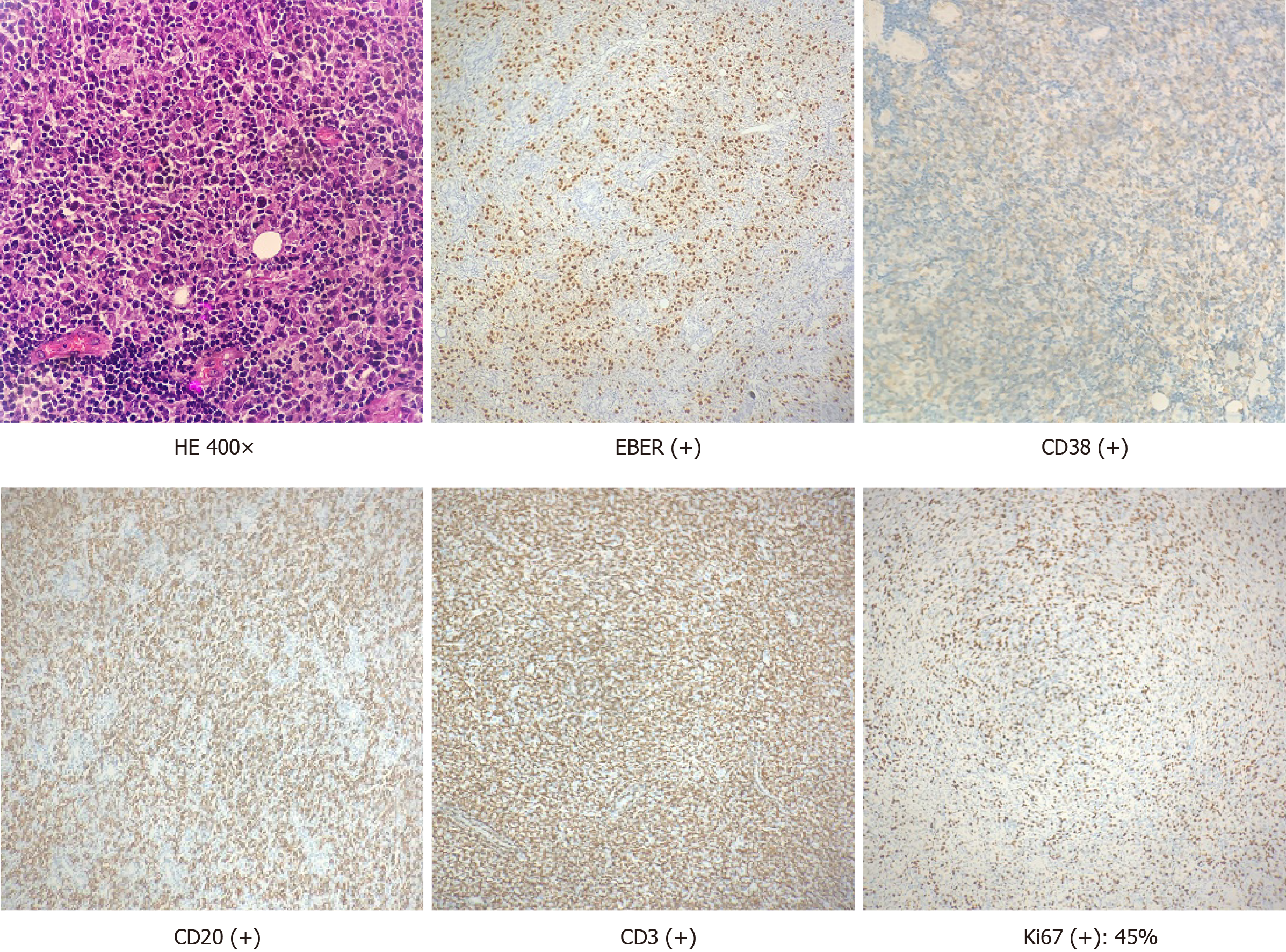 After confirmation of PTLD, we immediately changed the patient’s immunosup-pressive therapy by stopping MMF and reducing dosage of FK506. Additionally, the patient received 375 mg/m2 rituximab targeted treatment once a week for eight rounds, and EB-DNA level was monitored once a week.

After two rounds of rituximab treatment, EB-DNA turned negative (< 400 copies/mL). After four rounds of rituximab, she had no fever, and PET/CT scan showed that the area of hypermetabolism in the spleen was significantly smaller than before. Furthermore, the hypermetabolic nodules in the liver had disappeared, the numbers of small intestinal lesions were significantly reduced, and signs of S1 vertebral hypermetabolism had disappeared. Subsequently, another four rounds of rituximab treatment were administered until CT showed the spleen’s multi-dimensional position as being unclear. The patient’s kidney function remained stable (creatinine, 56-74 μmol/L) throughout the course of treatment and the concentrations of FK506 was maintained at 5 ng/mL.

PTLD is a well-known malignant complication that can occur after pediatric renal transplantation. The cumulative incidence rate of PTLD in the first 10 years after transplantation is 1%-2% in adults and 3% in children; however, new evidence suggests that the incidence rate of PTLD may be decreasing over time[4,5]. Based on the time of occurrence, PTLD can be classified as either early-onset PTLD (occurring < 1 year after transplantation) or late-onset PTLD (occurring ≥ 1 year after transplantation). Here, we report a case of early-onset PTLD with multiple abdominal nodules, and also discuss the clinical characteristics, diagnosis, and treatment of PTLD, as well as the need for virological monitoring and making adjustments in immunosup-pressive therapy. We also review the relevant literature.

It is well known that EBV infection increases the probability of developing PTLD after solid organ transplantation. A univariate analysis using the Cox proportional risk model showed that EBV was a risk factor for early onset PTLD[6]. Furthermore, the EBV positive rate among lymphoma tissue biopsies in the early-onset group was higher than that among biopsies in the late-onset group (88.9% vs 60%, respectively)[6]. A history of anti-rejection treatment was found to be a risk factor for late-onset PTLD, most likely because of decreased immunity of the recipients due to exposure to high doses of immunosuppressants[6]. The patient in this case was 17-years-old, EBV-DNA-positive, and had a history of methylprednisolone pulse therapy, all of which are risk factors for PTLD. Although co-infection with EBV and CMV is also a risk factor for PTLD, the patient described here was CMV negative, as determined by a blood serum test.

The patient displayed signs and symptoms that are typical for PTLD, including fever, sweating, and general discomfort, as well as of nausea and vomiting, because PTLD often involves the gastrointestinal tract, liver, and spleen. A physical examination revealed splenomegaly and right inguinal lymphadenopathy. According to the 2008 World Health Organization classification for lymphoid malignancies, this patient could be diagnosed as early onset (5 mo post-operation), monomorphic PTLD with a lymph node biopsy suggesting diffuse large B-cell lymphoma, which is the most frequent subtype in children. The patient’s good response to treatment with rituximab also suggested this diagnosis.

Currently, EBV virus seropositivity is an established risk factor for early-onset PTLD, and especially in children. The patient described in this report had EBV viremia (EBV-DNA: 1.66 × 104 copies/mL) when her clinical manifestations of PTLD occurred. We believe that being EBV positive might be an important factor in this patient.

Post-transplant monitoring of EBV in transplant recipients by serologic methods appears to be poorly predictive of PTLD and results in a considerable delay in detecting seroconversion. Serum quantitative EBV PCR seems to be required for early detection of primary EBV infection[7], and especially in EBV-seronegative children who receive an organ from an EBV-seropositive donor. Some studies suggest that an organ recipient’s EBV load should be monitored every 2 wk for the first 3 mo after surgery, and then every month for the second 3 mo, followed by every 3 mo for the last 6 mo[8]. However, there is no clear evidence that antiviral therapy helps to reduce a patient’s EBV load or prevent EBV infection[9].

Treatment options for PTLD vary based on the disease subtype, and may include rituximab monotherapy, and rituximab with concurrent or sequential chemoimmuno-therapy, radiation or surgery. A nearly universal initial step is a reduction of immunosuppression. Balancing the mortality risk associated with PTLD with the risk of graft rejection in a setting of reduced immunosuppression is a major challenge for clinicians[10]. Most immunosuppression reduction algorithms include a reduction of the calcineurin inhibitor (CNI) dose (25% to 50% of baseline)[10]. A previous study found that a long-term reduction of immunosuppressive therapy administered post-chemotherapy did not appear to be associated with an increased risk for chronic graft dysfunction[11]. Many patients are switched to immunosup-pressive regimens based on rapamycin inhibitors in a CNI-free regimen that includes prednisolone and/or MMF. However, a study found that a complete withdrawal of CNIs after developing PTLD was associated with poor long-term kidney graft function[10]. In children, there is evidence for a high rate of acute rejection after late CNI withdrawal[12], and CNI withdrawal also increases the risk for developing donor-specific antibodies[13]. In the case, we adopted the immunosup-pressive therapy adjustment strategy of reducing CNI drugs and stopping MMF. The patient’s renal function remained normal throughout the course of treatment, but long-term monitoring was still required.

The treatment options for patients with monomorphic PTLD include rituximab with or without CHOP chemotherapy. Other studies have also demonstrated the effectiveness of RTX therapy. Michonneau et al[14] reported that the 5-year overall survival and disease-free survival rates for patients who received rituximab with or without chemotherapy were 69% and 80%, respectively. We used rituximab without chemotherapy in this patient and obtained a very good response. After two rounds of rituximab, the patient’s EB-DNA level turned negative (< 400 copies/mL), and after eight rounds of rituximab, the foci of the lesions in the spleen, liver, and intestinal wall became unclear, and there were no adverse reactions to the treatment. Although the use of rituximab has significantly improved the prognosis of patients with PTLD, with a treatment response rate of 52%, the long-term survival rate of patients with PTLD remains low, and the 1- and 3-year survival rates are 48% and 30%, respectively[15]. The patient described in this case report still requires long-term monitoring for signs of EB virus infection, as well as assessments of renal function and quality of life.

Based on this case and review of the relevant literature, we conclude that children who undergo renal transplantation remain at risk for developing PTLD. Early-onset PTLD is related to EBV infection and EBV-PCR should be performed on a regular basis after a kidney transplantation. Early pathological biopsy to confirm the diagnosis is critical to treatment and prognosis. Reducing immunosuppression and rituximab therapy are effective methods for treating PTLD, but need to be initiated as early as possible. Finally, there remains a need for further follow-up studies to determine PTLD patient survival times, graft function, and detect any adverse reactions to specific treatments.