Chronic neck pain is a common clinical problem. It has long been considered that degenerative cervical disc is an important source of chronic neck pain. In the clinic, cervical discography is thought to be a useful and safe method to distinguish aging discs from pathological discs, and the probability of complications caused by it is really rare. However, once complication occurs, it is likely to cause fatal consequences to patients. Therefore, accurate judgment and effective treatment are crucial.

A 45-year-old female was admitted to the department with a 5-year history of severe neck pain, dizziness, and tinnitus. In order to find the diseased disc, analgesic discography was performed on C4/5 and 6/7 discs successively. Unfortunately, Discitis with an epidural abscess was caused during the procedures. With the help of magnetic resonance imaging, an accurate diagnosis was made and an urgent anterior cervical operation was given subsequently. The patient ultimately recovered well.

Discitis with epidural abscess is a rare complication after cervical discography, which needs accurate diagnosis and effective antibiotic treatment.

Core tip: Discitis with epidural abscess is an infrequent complication after cervical discography, which may cause incalculable damage to patients. Therefore, rapid diagnosis and effective treatment are extremely significant.

A cervical discitis combined with epidural pyogenic infection is an uncommon complication after intradiscal injection. The usual clinical symptoms include fever, neck pain and stiffness, and neurologic deficits[1]. Magnetic resonance imaging (MRI) is a useful diagnostic tool to identify discitis and epidural abscess. Once confirmed, adequate broad-spectrum antibiotics should be administered intravenously. If necessary, surgical debridement and decompression may be helpful to the recovery of impaired neurologic function[2]. In this article, we presented a rare case of a patient, who developed a discitis and epidural abscess after cervical analgesic discography.

A 45-year-old woman had a 5-year history of severe neck pain, dizziness, and tinnitus, which seriously affected her quality of life.

Prior to our department, the patient had been taking non-steroidal anti-inflammatory drugs for more than 6 mo. However, the symptoms did not improve but instead continued to worsen.

No past illnesses were documented and the patient had no relevant traumatic history. 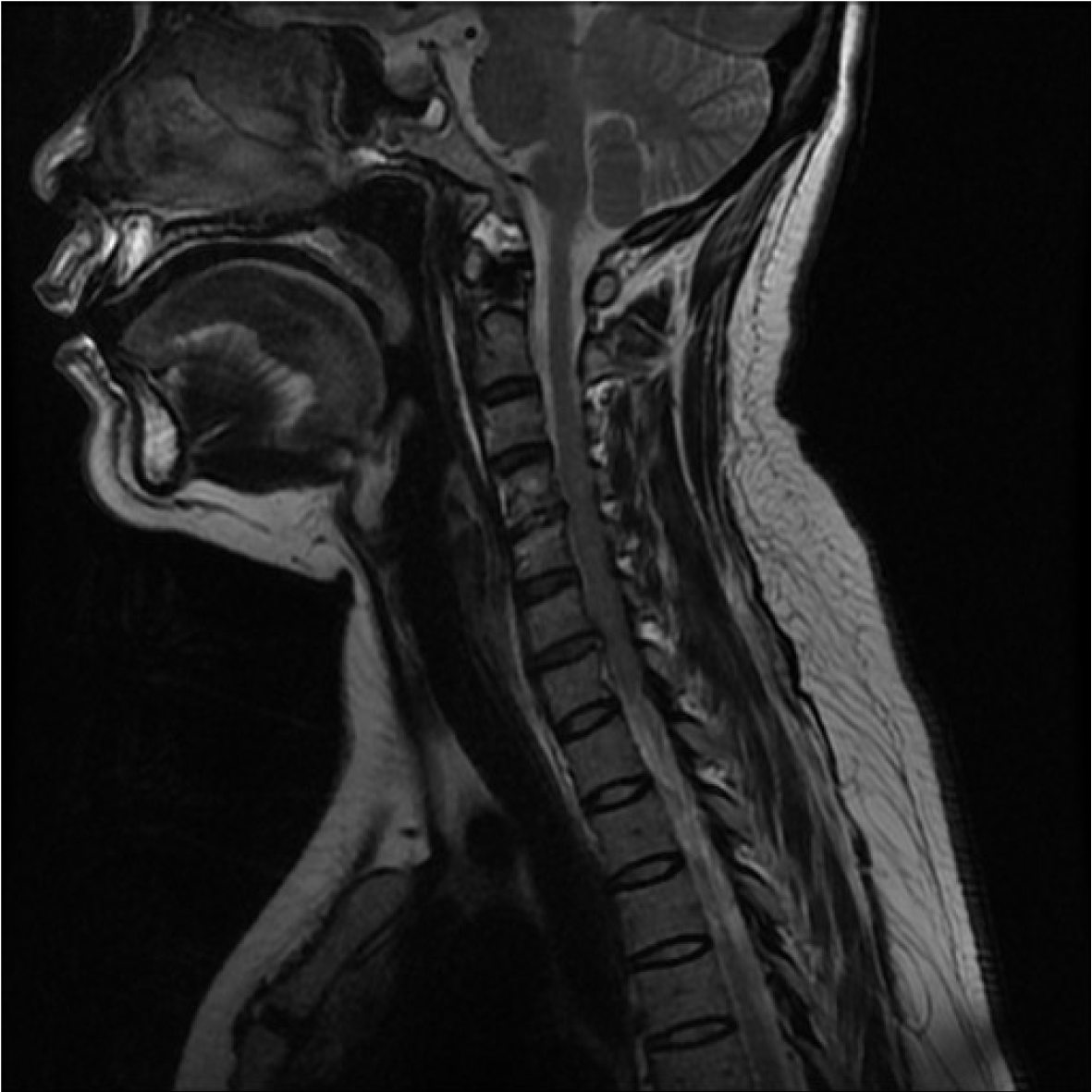 The initial diagnosis for the patient was cervical disc degenerative disease with cervicogenic dizziness. However, we could not confirm which cervical disc finally caused above symptoms according to the radiological data and physical examination. Therefore, analgesic discography on C4/5 and 6/7 discs was then performed successively.

Under the guidance of fluoroscopy, a 22 G discographic needle was inserted into the center of C4/5 disc through anterolateral approach and judged from anteroposterial and lateral views (Figure 2A and B). Then a small volume (0.3 mL) of 0.25% bupivacaine was injected. The patient only felt a slight relief of neck pain, while her dizziness and tinnitus remained unchanged in the following several hours. At 2 d after the first injection, the patient’s vital signs were stable with a normal body temperature. Therefore, we used the same method to manipulate the C6/7 disc (Figure 2C and D). This time, the patient experienced significant relief of neck pain as well as dizziness and tinnitus in the next 4 h. Based on this situation, the C6/7 disc was finally thought to be the diseased disc. In addition, routine intravenous administration of antibiotic Rosafine (Ceftriaxone Sodium) 2 g was used to prevent infection during above two operations. 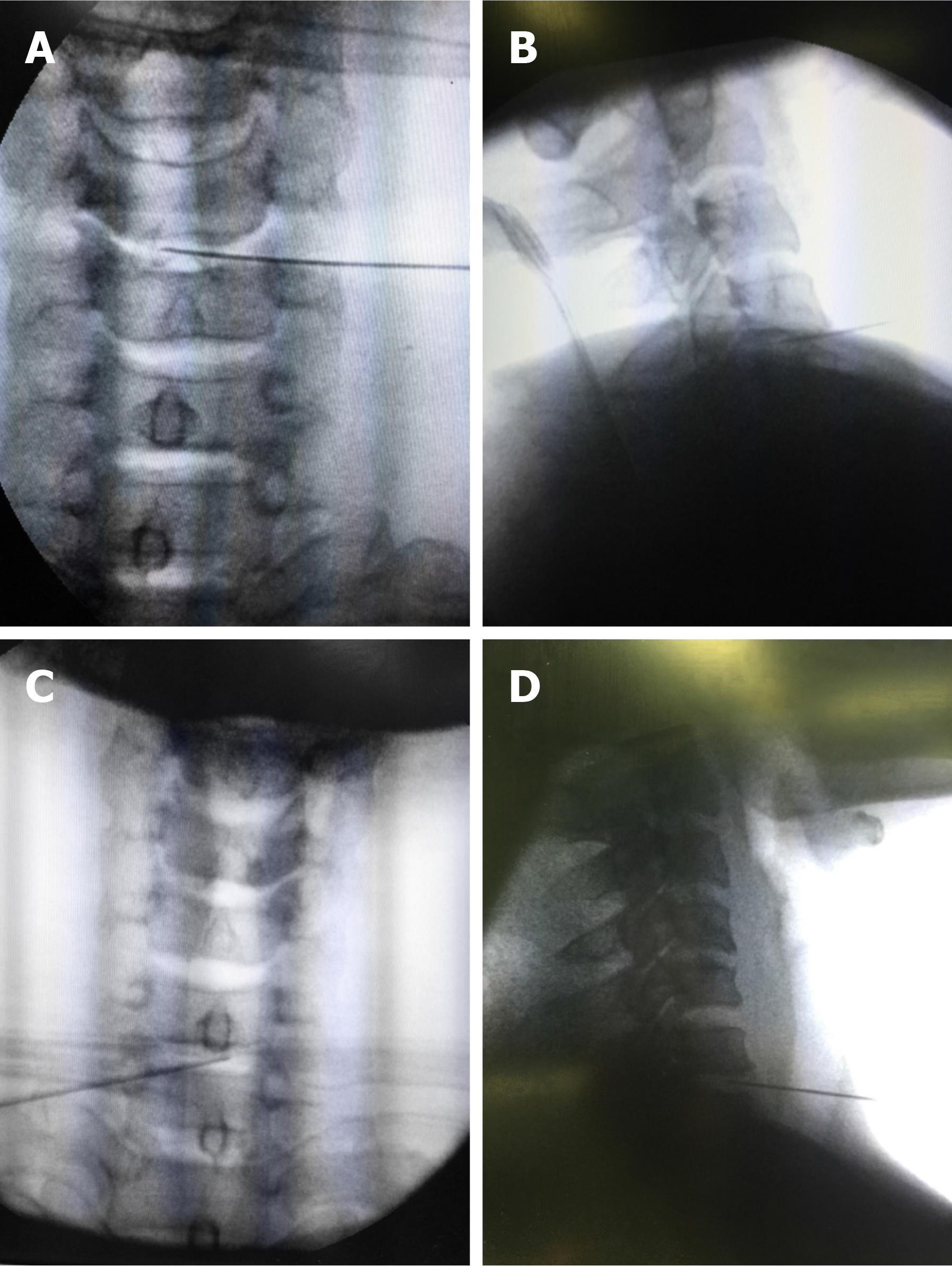 Unfortunately, the patient felt more severe neck pain than before, which rapidly became unbearable on the night of the second injection. Strong painkillers had limited effect. The next morning, neck stiffness and shoulder pain became the main symptoms associated with low fever (37.9 °C). Blood routine showed that the white blood cell count was 14.68 × 109/L and the percentage of neutrophils was 96.7%. Erythrocyte sedimentation rate was 17 mm/h, and general C-reactive protein (CRP) was 94.24 mg/L. Acute discitis was suspected and the patient was treated with Rocephin 2 g twice a day.

Over the next few days, the patient’s temperature gradually increased, reaching a maximum of 40 °C. Physical examination showed tenderness of spinous processes between C5 and T2, stiffness of neck, and normal strength of limbs. Pathological signs were negative. The cervical MRI scan showed that the signal intensity of C6/7 disc was enhanced (Figure 3), which supported the diagnosis of cervical discitis. On day 10, the patient suddenly experienced limited neck rotation, limb weakness and numbness, as well as sphincter dysfunction. Physical examination showed that biceps brachii muscle strength was grade 3/5 (Medical Research Council, MRC), hand grip strength decreased (grade 3/5, MRC), skin sensation below the navel gradually decreased, the strength of bilateral iliopsoas, quadriceps femoris, anterior tibialis and long fibula muscles was about grade 1/5. Her deep tendon reflexes were hyperreflexive and pathological signs were positive. The suspicion of an anterior epidural abscess was confirmed by a new cervical MRI scan (Figure 4). 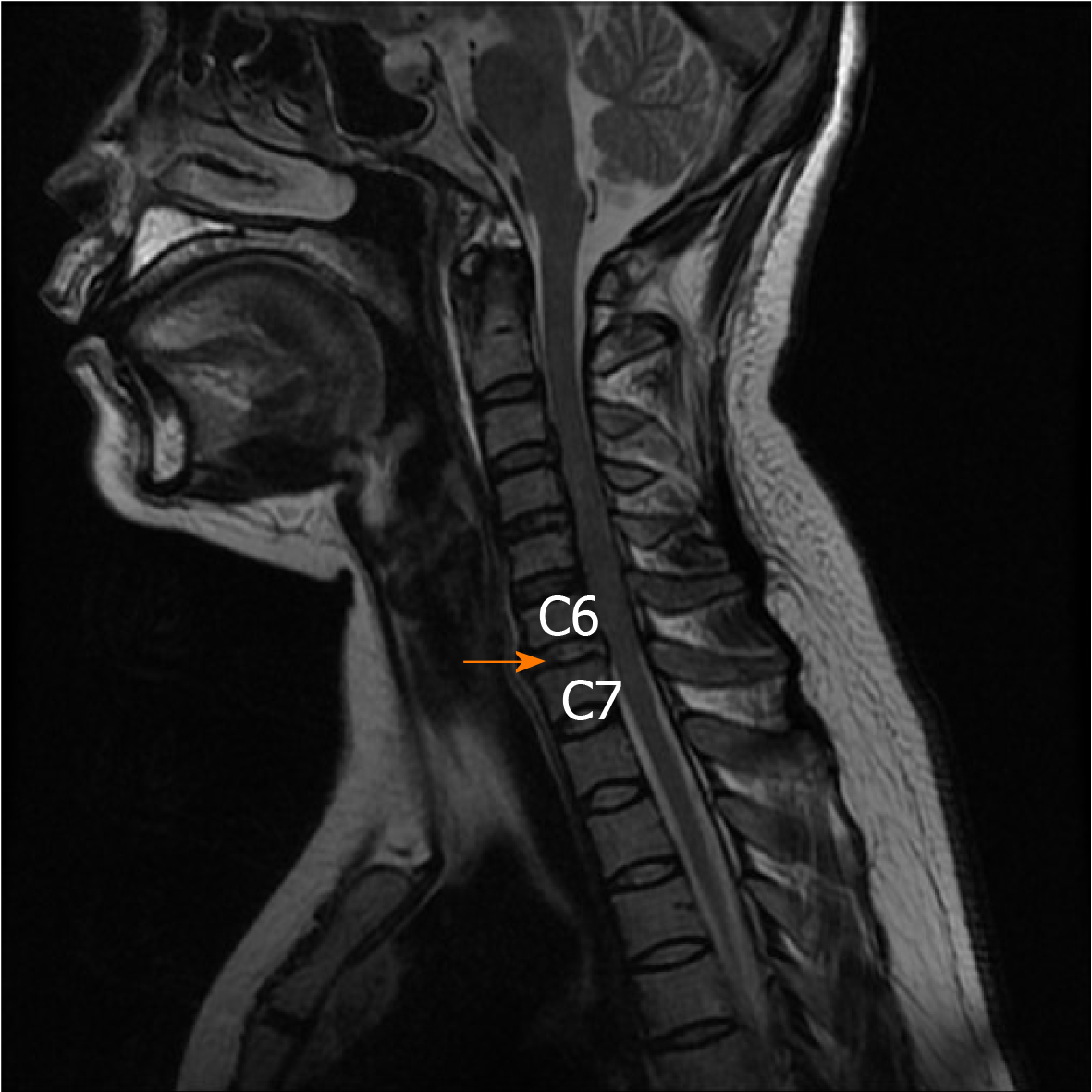 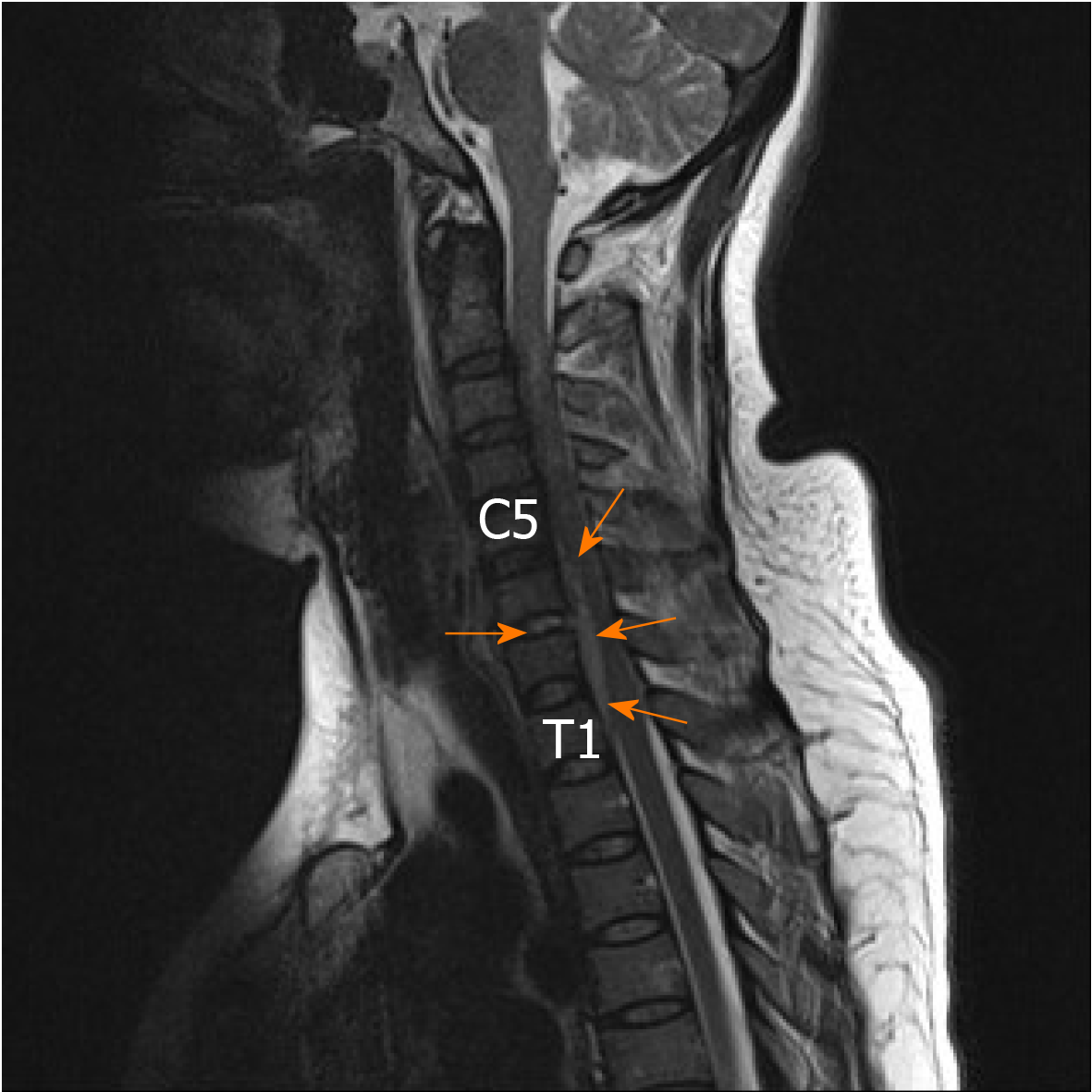 On the 1st day after operation, the neck and shoulder pain improved obviously. The temperature slowly dropped from 39.2 °C to 38.3 °C. The muscle strength of upper limbs restored to grade 4/5. The skin sensation below the navel was still weakened. The muscle strength of bilateral iliopsoas, quadriceps femoris, anterior tibialis and peroneus longus restored to grade 2/5. The results of pus culture showed anaerobic infection. The antibiotic therapy was converted to anaerobic sensitive antibiotics meropenem (2 g/8 h) and ornidazole (0.5 g/12 h). The drainage system was pulled out 20 d later. After 28 d of continuous antibiotic treatment, the white blood cell count dropped to 6.90 × 109/L, the percentage of neutrophils dropped to 57.3%, the blood sedimentation to 2 mm/h, and the CRP to 1.10 mg/L. At 1 mo after the operation, the patient felt a marked improvement in neck pain, tinnitus and dizziness, and her limb sensation and motor function returned to normal. Following up for one and a half years, her discitis did not recur.

Discitis after discography is caused by the invasion of bacterial contaminated needles into the disc. Clinically, neck pain, stiffness and nerve injury are common symptoms of discitis and epidural abscess. Antibiotics are an effective conservative treatment for discitis and epidural abscesses, especially in the early stages before neurologic impairment, or if microbes can be identified. In addition, antibiotic treatment is best for at least 4 wk, as studies have shown a recurrence rate of 25% in patients treated for less than 4 wk[9,10].

If patient shows neurological impairment and MRI shows epidural abscess, surgical debridement, decompression and lavage should be performed immediately. In most cases, surgical removal of epidural abscesses is considered to be very effective[11-13], especially when the abscess is in the neck. Moreover, early decompression can prevent possible secondary ischemic damage to the spinal cord due to vascular compression[14,15]. In our patient, through surgery decompression and the use of sensitive antibiotics, the injured nerve function was quickly restored, the epidural abscess was completely absorbed (Figure 5), and the disastrous results were avoided. 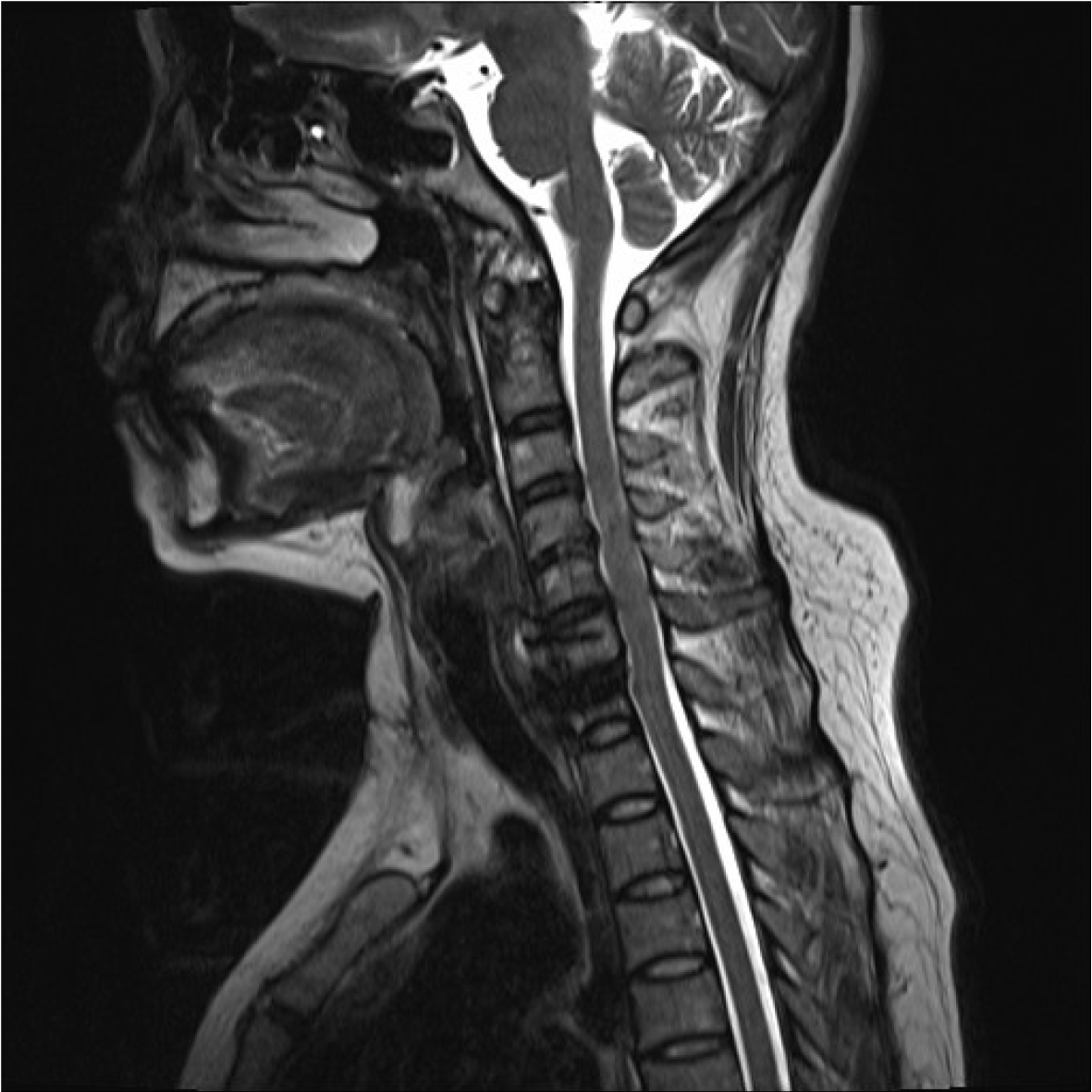 In conclusion, discitis with epidural abscess is a rare complication after cervical discography, which needs rapid diagnosis and effective antibiotic treatment. MRI has high sensitivity and specificity for the diagnosis of suspected epidural abscess. In cases of neurological dysfunction, timely surgical decompression is the key to avoid catastrophic consequences.