A 47-year-old woman visited our hospital with a non-tender palpable lesion in her left breast. The lesion had not shown changes for 10 years. However, it recently increased in size. Sonography showed a well circumscribed cystic lesion with internal debris and fluid-fluid level. Magnetic resonance imaging showed a well circumscribed oval mass with T1 hyper-intensity compared to muscle and T2 high signal intensity. There was a small enhancing mural component in the inner wall of the mass. The tumor was resected. Its pathologic result was a malignant transformation of benign sweat gland tumor such as hidradenoma. The lesion was treated with excision and radiation therapy. At 1-year follow up, there was no local recurrence or metastasis in the patient.

In the case of a rapid growing cystic mass in the nipple and subareola, it is necessary to distinguish it from a malignant sweat gland tumor.

The human body mainly consists of two types of sweat glands: Eccrine and apocrine sweat glands[1]. Eccrine glands are distributed in the palms, soles, axillae, and forehead while apocrine glands are mostly distributed in the axilla and anogenital area[2]. Apocrine glands can secrete a proteinaceous viscous sweat with a unique odor. The breast is sometimes regarded as a modified apocrine gland[3]. Eccrine sweat glands can secrete hypotonic sweat consisting mostly of water and electrolytes to control body temperature[1]. Sweat gland tumors are uncommon, especially when they occur in the breast. They have complex classification. These tumors have been reported under different names[4]. We report a case of malignant sweat gland tumor of the breast treated with excision and radiation therapy.

A 47-year-old female patient presented with a palpable lesion protruding from the left areola. This lesion was first noted 10 years earlier and had not shown changes. However, recently it noticeably increased in size.

History of past operation

Physical examination revealed a soft, fluctuating, mobile, and non-tender mass measuring approximately 4 cm in size. Part of the overlying skin was slightly greenish in appearance with mild protrusion. However, there was no ulcer or other skin changes.

Sonography showed a well circumscribed oval cystic lesion with internal hyperechoic debris and fluid-fluid level. There was no internal blood flow on color doppler study. The mass broadly contacted with dermis, compressing the breast parenchyma (Figure 1). Breast magnetic resonance imaging (MRI) was performed to check breast implants, on which the lesion could also be evaluated. MRI showed a well circumscribed oval mass of left subareolar area measuring 3.9 cm. The lesion attached to the cutaneous layer of the areola and compressed the breast parenchyma. Thin fatty layer was noted between the mass and the breast parenchyma, suggesting separated mass from the breast. The lesion showed T1 hyper-intensity compared to muscle and high T2 signal intensity. On post-contrast fat saturation T1-weighted image, the mass showed a well-circumscribed thin and even enhancing wall. There was a small enhancing mural component in the inner wall of the mass (Figure 2). It was not detected on ultrasound because internal debris filling the mass masked the mural component. In differentiation of the lesion, we overlooked the enhancing solid portion and considered the lesion as benign such as epidermal inclusion cyst. 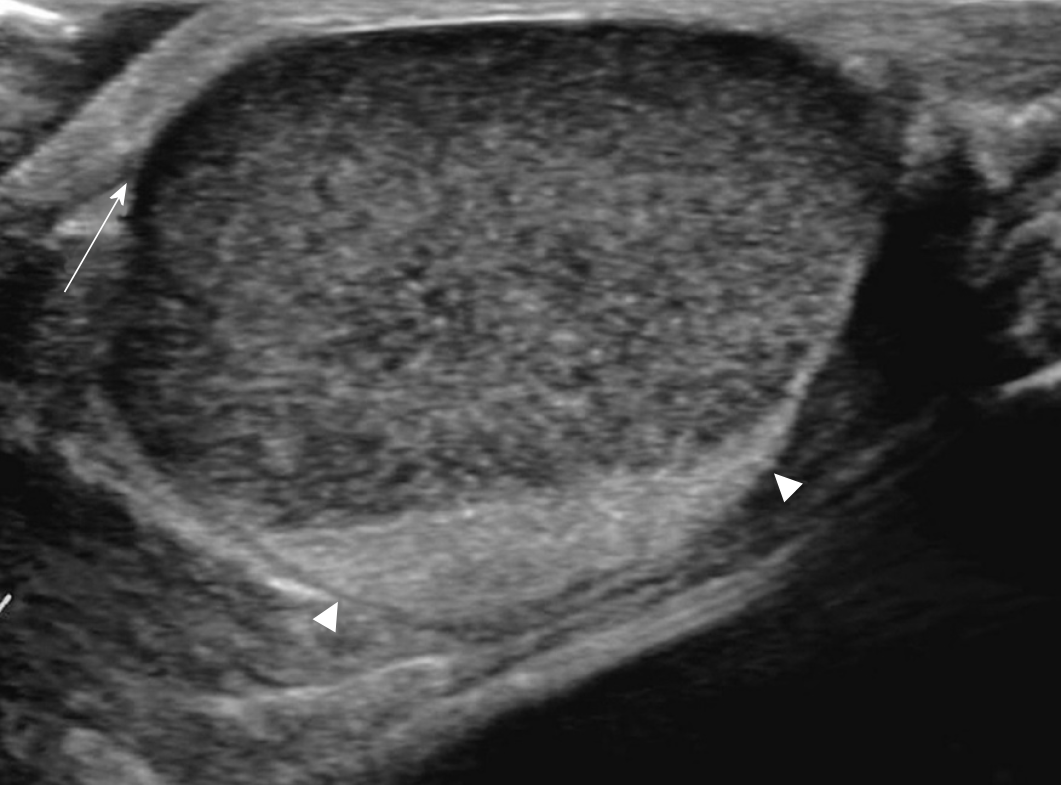 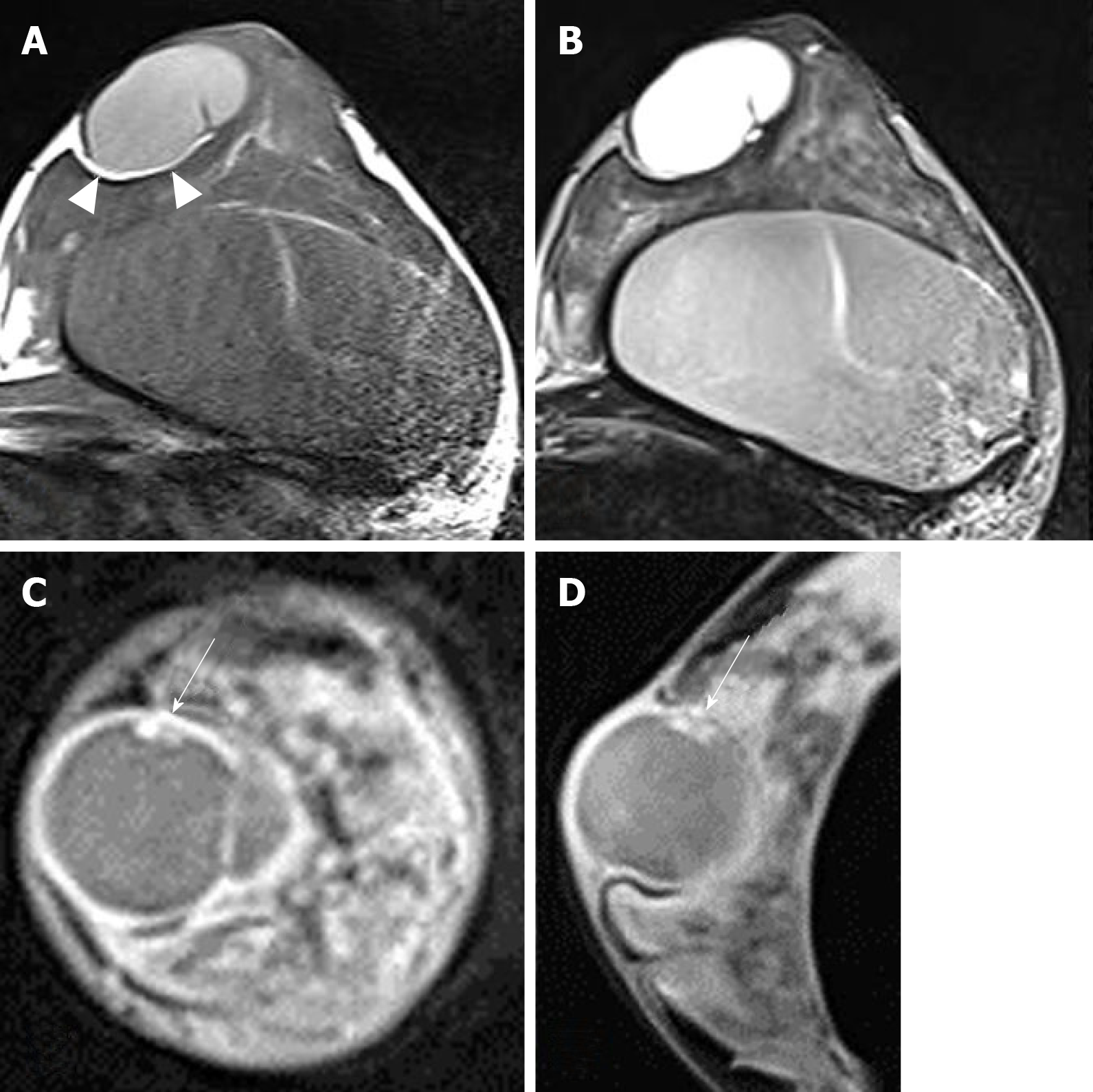 Figure 2 Breast magnetic resonance imaging showing a well-circumscribed oval mass of the left subareola. A: The lesion attached to cutaneous layer of subareola and compressed the breast parenchyma. It showed a T1 hyper-intensity compared to signal in muscle. Thin fatty layer was seen between the mass and breast parenchyma (arrowheads). Breast implant was noted in the retromammary area; B: On T2-weighted axial image, the lesion showed a high signal intensity; C, D: On post-contrast fat saturation T1-weighted coronal (C) and sagittal (D) images, the mass showed a well-circumscribed thin and even enhancing wall. There was a small enhancing mural component in the inner wall of the mass (arrows).
Pathological examination

The tumor was resected due to its persistent and growing tendency. The mass was well demarcated with dense fibrous tissue. It was located between the breast parenchyma and the areola. The mass showed deep khaki color. It was filled with brownish and tan necrotic mucoid fluid. Microscopically, the lesion was predominantly cystic, measuring 3.5 cm × 2.5 cm × 2.4 cm with solid portion of 1 cm × 0.3 cm carcinoma and benign tissue of less than 0.1 cm. The carcinoma was composed of epithelial cells with clear or eosinophilic cytoplasm, prominent nucleoli, and frequent mitosis. Suspicious microinvasion to the fibrous cystic wall was noted (Figure 3). Resection margin was less than 1 mm and free of pathology. There was no lymphovascular invasion. Cytokeratin expression of the tumor showed positive for CK7 but negative for CK20. It was moderately positive for Ki-67, reflecting cell proliferation. Regarding other results in immunohistochemistry, it was positive for P63, C-erbB-2, and P53, but negative for estrogen and progesterone receptor. 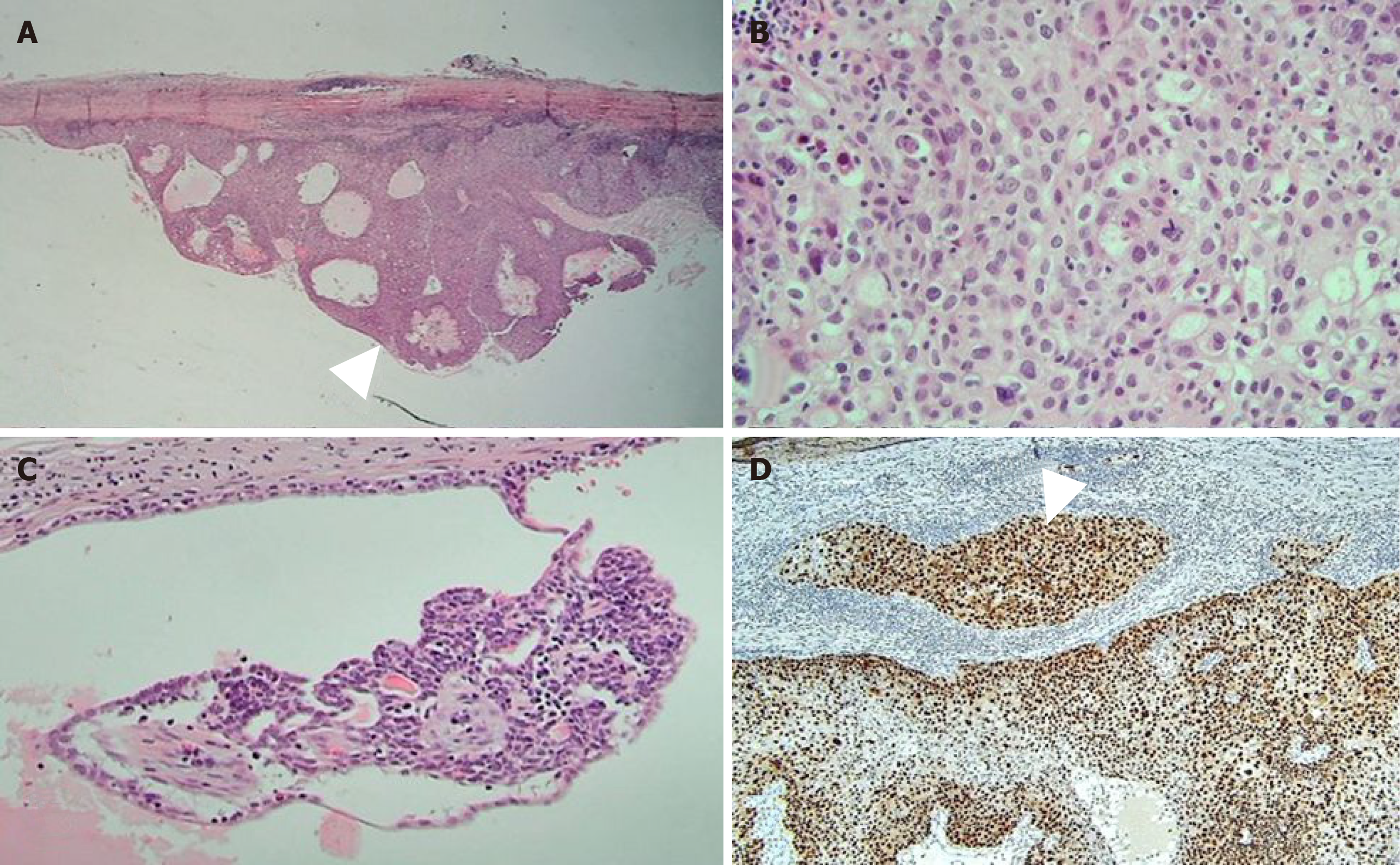 Based on its history of a longstanding cutaneous mass, residual benign tissue, histology, and immunohistochemistry results of the carcinoma, the pathologic result was concluded to be malignant transformation of benign sweat gland tumor such as hidradenoma.

Depending on the pathological result of malignancy after resection, further surgery was considered. However, the lesion was well separated from the surrounding tissue at the time of operation and the specimen margin had no pathology. Moreover, additional lesions or pathological lymph nodes were not found on positron emission tomography-computed tomography (CT) performed after malignant diagnosis. Therefore, no further surgery was performed. Radiation therapy was performed at the site of excision.

The first follow-up was performed by ultrasound at six months after surgery. At 1-year follow up, she underwent mammogram, breast ultrasound, chest and abdominal CT, and bone scan. No local recurrence or metastasis was found in the patient.

In the present case, features first considered for diagnosis were location, morphology, and cell elements. This lesion was located in the dermal and subcutaneous layer without epidermal connection. The tumor was cystic with focal solid component. Main cellular components were cells having clear or eosinophilic cytoplasm with frequent mitosis. A very small benign component remained within the mass. These findings strongly suggested malignant transformation of hidradenoma or hidradenocarcinoma[5,6].

Hidradenoma is a benign tumor that usually appears as a solitary skin-colored lesion. It can be larger than 2 cm in diameter. It can occur at any anatomical location and age[7,8]. It is classified as poroid hidradenoma of eccrine cell origin and clear cell hidradenoma of apocrine cell origin. Apocrine nodular hidradenoma is more frequent than eccrine variant. However, both subtypes could be present in the same lesion. It might be a solid and/or a solid-cystic mass in about 90% of cases[2,9].

Most cases of hidradenocarcinoma arise de novo. However, the tumor may also arise in pre-existing hidradenoma[10]. Hidradenocarcinoma has been reported in various names, including malignant nodular/clear cell hidradenoma, malignant clear cell acrospiroma, clear cell eccrine carcinoma, and primary mucoepidermoid cutaneous carcinoma. Tumor cells are similar to nodular hidradenoma. However, they can exhibit cytonuclear atypia with increased mitotic activity. There may be evidence of nodular hidradenoma remnants. Invasive growth patterns are not universally seen. Carcinomas can be distinguished from benign hidradenomas by the presence of active mitosis and cell polymorphism.

Immunohistochemistry results can support pathologic diagnosis. In our study, CK7 was positive. It was expressed in secretory coil of normal eccrine and apocrine glands. P63 is a marker of myoepithelial cells seen in most sweat gland tumors. It can be considered to differentiate the secretory coil of sweat glands. It is expressed in most of traditional apocrine tumors[7]. P63 is useful in a panel of antibodies for immunohistochemical differential diagnosis between sweat gland carcinoma other than primary cutaneous apocrine carcinoma and skin metastasis of breast carcinoma[11]. Estrogen and progesterone receptors are often positive in skin tumors with eccrine differentiation[4]. However, they were not expressed in the present case. P53 is present in some sweat gland carcinomas. It is rarely present in benign tumors. Ki 67 reflects cell proliferation. Mitotic rate is an important indicator of malignancy[7]. It was moderately positive in the present case.

The most common location of hidradenoma or hidradenocarcinoma in the breast has been reported to be the nipple and subareolar region[17-21]. There have been reports of circumscribed high-density masses on mammograms and cystic masses with significant solid components or mural nodule on sonogram[7,22,23].

Nodular hidradenoma should be completely removed as malignant transformation may occur in other parts of the lesion. In addition, hidradenoma has a recurrence rate of approximately 12% unless fully excised, especially for lesions with irregular peripheral margins[10]. Hidradenocarcinomas do not always behave aggressively. However, they can have aggressive course with metastasis and/or local recurrence. Primary treatment is extensive local resection with or without lymph node dissection[24,25].

Malignant sweat gland tumors of the breast are rare. They may appear similar to benign cystic masses. However, if the lesion develops in the nipple and subareolar area with rapid enlargement, it is necessary to distinguish it from malignant cystic lesion. Ultrasonography is useful as a primary modality while MRI is better for characterizing features of tumors with superior resolution. Pathologic confirmation is very important because the lesion may be similar to benign lesion in physical examination and/or imaging studies. Because treatment methods for malignant sweat gland tumors have not been fully established yet, complete excision with negative margin is important. Additional treatment such as radiation therapy could be considered.